Beyond the Gates of Antares: Overview

Beyond the Gates of Antares is our forthcoming Science Fiction wargame – we call it Antares for short. The first model releases are currently in preparation – we hope to have them available for sale around the middle of 2014. You’ll find plenty more about the models, the game and background to Antarean space via the links on this page. New articles are added regularly showing our work in progress, so don’t forget to check back to see what’s new. Even better, subscribe to the Warlord newsletter to receive news about all of our latest releases.

The Antares game and background have been created by me – Rick Priestley – to fill what I think is a considerable void in modern science-fiction wargaming. Namely, a challenging game based upon solid representational mechanisms that can be adapted easily to facilitate any size of conflict from the smallest skirmish to huge battles. Truth be told, I’ve built a game that I know I will enjoy playing for other like-minded gamers. That’s players who want a game to be flexible enough to enable them to weave interesting scenarios, but also challenging enough to just pitch forces into a straightforward conflict when that suits us best. Similarly, I’ve created a background that offers opportunities for exploration and invention, but which also establishes a series of strong, and very different, forces right from the start. If that sounds like trying to reconcile opposites then yes I admit that it does! That kind of scope has always been an important aspect of fantasy and science-fiction wargames design for me! To paraphrase Oscar Wilde – it’s a very boring man who can only play a wargame one way! 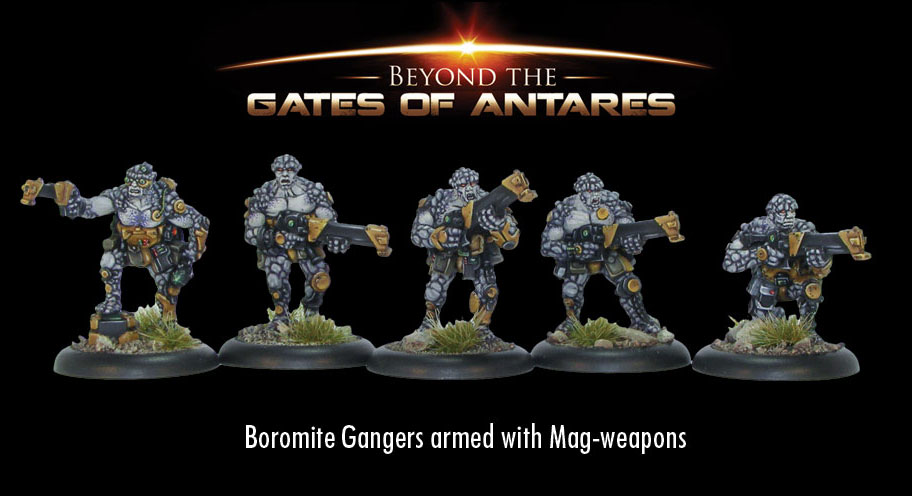 The models for the Antares game are 28mm size and either cast in metal or moulded in resin – depending upon what they are. Most troopers and ordinary size models will be metal. Larger pieces that are impractical to make in metal will be resin instead. Eventually, we would anticipate making some of our models as plastic kits – as we currently do with many of our historical ranges.

We intend to cast our models with integral bases that allow them to stand unaided. This enables them to be mounted upon any suitable size or style base either for gaming or display. However, we also intend to include separate round bases with future models for use in the Antares game.

To begin with, we want to build two playable forces, which we will expand to four as quickly as we can. The first two to be designed cover the Boromite Guilds and the Algoryn Prosperate. You’ll find more about these two in the accompanying articles. Our second design project is to build the armies for the Panhuman Concord and Isorian Shard. These are the biggest and most influential civilisations of Antarean space. Once we have playable forces for all four of these we will work to expand the range by making more models for all four armies. We’ll also start making models for the remaining forces described in the background. Ultimately it’s an open ended project and we can go on adding more forever, but we want to get a core of playable forces ready as soon as we can.

For those who are interested in such things, some of our models are designed as physical sculpts in the traditional manner, whilst others are digital sculpts created on a computer. It all depends on which method the sculptor prefers to use. Digital sculpting does allow better representation of mechanical and regular shapes, or at least does so more easily, as you will see in some of the work in progress articles. 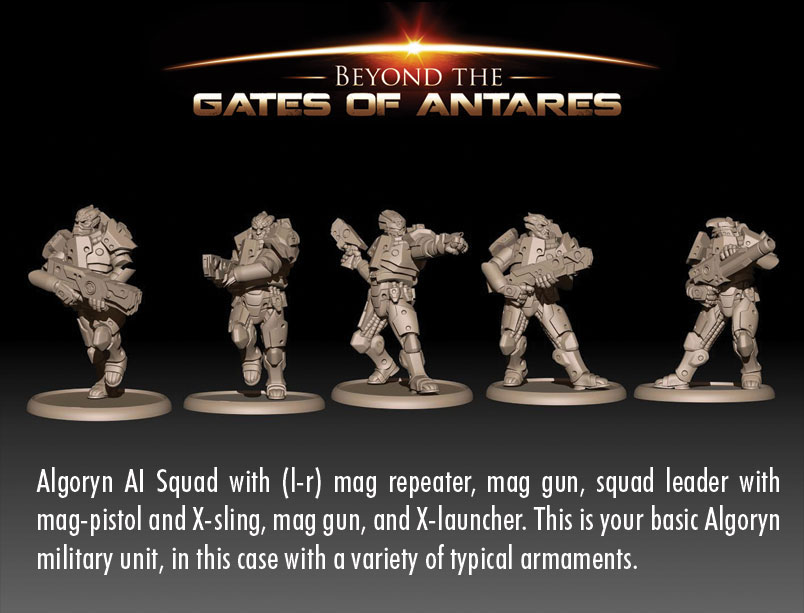 The core game rules have been built around the popular Bolt Action system and utilise Warlord’s unique Order Dice for unit activation. However, the rules themselves are considerably developed from Bolt Action, and feature a decimal (D10) dice test system rather than a D6. The most obvious consequence of this is to allow for a greater variation of weapon types, tactical modifiers and troops stats.

The initial game rules envisage games of about five to fifteen units a side, with a unit being a single squad of five models, a command squad of three models, a support team that consists of a weapon and two or three crew, or a flight of probes – usually about three. These unit sizes are not fixed, but they are the kind of sizes that are the most effective in the game in most situations. The number of units described is enough to play a fairly modest game up to a battle that would typically last for a whole evening of play. It would involve maybe as few as twenty models for a small game to maybe sixty or so for a large one. However, the system is flexible, and games of practically any size can be played if you have sufficient room.

The Order Dice system allows for conventional game play between two opposing forces controlled by one or more players. As such you can play head-to-head games just as you can with Bolt Action. You can also play in teams if you prefer – as we commonly do with bigger Bolt Action games. The Order Dice system also allows for multi-sided games and games involving third party games masters –something I particularly wanted to have as an option in some scenarios.

The game can be played on a typically sized wargames table four feet wide and four to six feet long. Movement distances and weapon ranges are scaled to work with tables of this size, although weapons have potential ranges that are far greater than envisaged in Bolt Action. You can – and we do – play on larger tables when these are available – but you don’t need a gigantic set-up to play.

Our intention is to make the work in progress core game rules available as a PDF download at about the same time as we release our first models. The core rules will cover basic infantry combat and will include sample forces as well as rules for the various weapons and equipment. We’ll then build our online resources to include additional rules for other aspects of warfare such as vehicles, aerial units, and so on. We’ll also continue to update the core rule set as we receive feedback from our playtest groups and via the Beyond the Gates of Antares forum.

Our current intention is to publish the complete game only once we are ready, but in the meantime to make updated versions available as PDF downloads. 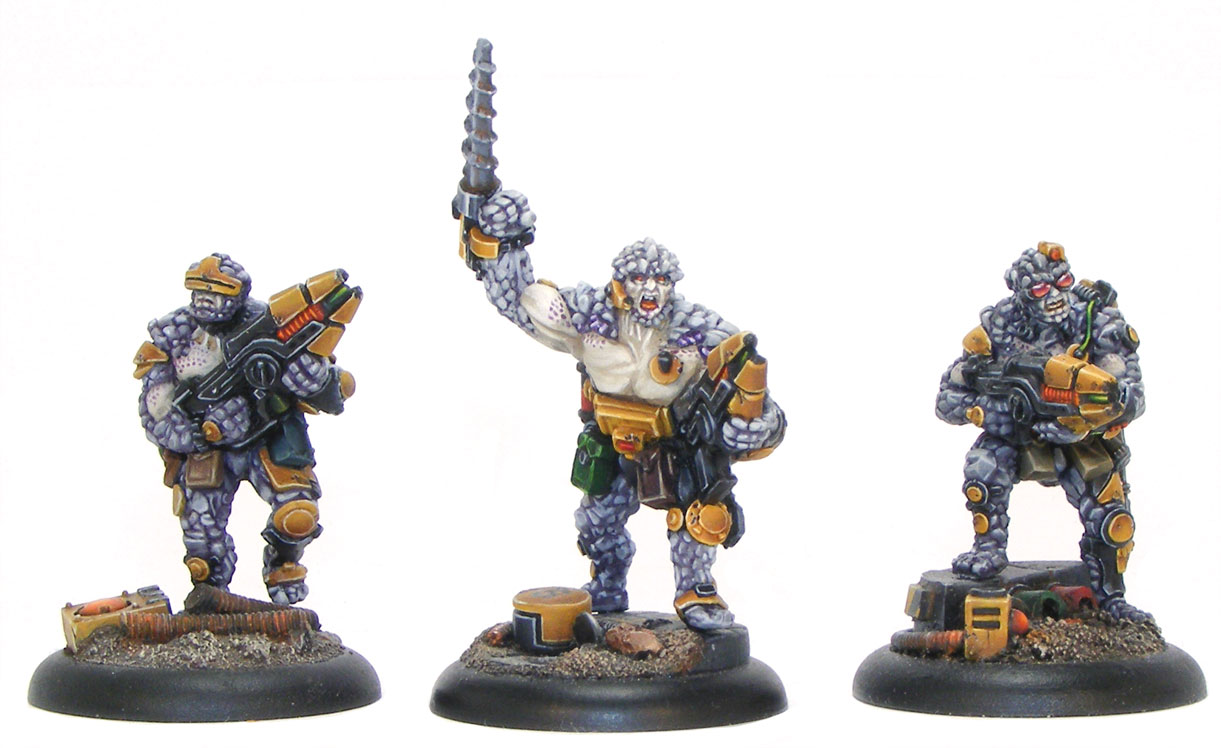 The Antares games take place in a far future time when mankind has spread throughout space by means of a network of interspatial gateways – the Gates of Antares. Although the majority of human populations are physically comparable to the humans of today, some have developed into new species with many distinct differences. Some of these differences are artificially triggered adaptations, designed to enable people to survive environments that would soon kill ordinary humans. However, the strangest of these panhuman morphs – as they are called – are the New Human elites referred to as NuHu.

The NuHu are taller than ordinary humans and elegantly proportioned, slender and graceful, appearing to lack physical strength – although this is deceptive. They are biologically adapted to function as part of the Integrated Machine Intelligence (IMTel) that controls most advanced human societies. These societies rely upon a nanite cloud of virus-sized machines that acts as a medium of communication on most advanced human worlds. NuHu can interface directly with the nanosphere and form a biological component of it – a living manifestation of a planet’s all pervading IMTel. The NuHu Mandarins of the Panhuman Concord, and the NuHu Senatexis of Isori, are both the masters of the IMTel and its slaves. Connected to it, a NuHu’s powers are almost superhuman. Isolated from it, a NuHu quickly becomes disoriented and will most likely be driven insane or even die if the disconnection endures for very long.

Antarean space comprises millions of worlds, many of them inhabited by humans. Much of the conflict that forms the subject of our game revolves around the exploration of new worlds or search for systems that provide easy staging points through the Antarean network. Many worlds settled by humans in ages past remain isolated to this day. Intelligent aliens inhabit other worlds, potential allies or threats. However, the ultimate ambition of all the civilisations of Antarean space is to uncover the secrets of Antares itself: to find the race that built the network or at least the remnants of its technology. That race is called simply the Builders – and the quest to obtain Builder technology is one that preoccupies all of the advanced societies of Antarean space – human and otherwise.