The Germans are back in action against the Soviet union – can they turn the tide of the war? 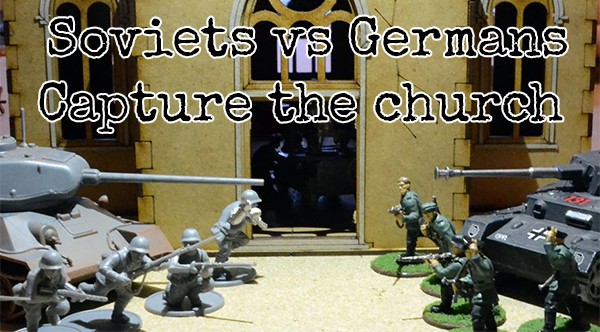 Warlorder JoshB is back with his second battle report against his German-using friend!

Josh: Now that we played a game and got familiar with it and corrected a lot of rules and our army lists, we were both prepared and ready to play round 2!

The objective of the game was to capture a church which resided within the centre of the board and we would appear 12″ away from the edge creating a 24″ gap between us. The rules were simple:

Considering I knew what our objective was and had a rough idea on how the Germans performed, I was stuck choice wise between hardiness of veterans or numbers of regulars, I went with regulars. I figured I can swarm the objective and literally out-last the amount of bullets that they can dish out before the end of turn 6. As the saying goes, if you have more men than they have bullets, they will eventually run out of ammunition.

All regular unless stated

The general idea was to control the courtyard and the entrance of the church because I know if the Germans had control I wouldn’t of been able to get close. The tank riders, navy and the cannon fodd…I mean, rifle squad, were the front line with the T-34, medic, truck, jeep and junior lieutenant supporting this force. Whilst the rest of the army supported from afar, mainly covering with their machine guns and the senior lieutenant sticking around for the morale and ‘snap to action. I’d like to think it planned out like I thought it would.

Again, my opponent was a bit stuck with his choices due to the lack of models in his army, but it was and always will be a friendly game so we openly proxy, it is a good practice to get to know how certain units work. But I digress; he literally stuck to his guns (get it?) and got a similar army to last time but with additional troops and supporting units.

All regular unless stated

This army list was an adaption of his previous one, (check it out here!) he kept with what worked well, the grenadiers and Panzer IV and doubled-up or added different units. His main tactic was to have his entire force support the SS vets and ‘truck’ into the church and have them hold out whilst the grenadiers then pushed up and took more favourable advantage points, like the courtyard and the building next to it. I believe the Panzer actually served as a distraction more than a threat as it was placed directly in the open, however he wanted to take my T-34 out with it.

Even though I know its just wrong and they may not fight well for me, I was so keen to play my second battle I simply did not get enough time to paint them!

If you’re just starting out in Bolt Action then you could make a house rule that all unpainted units are inexperienced… just get gaming! 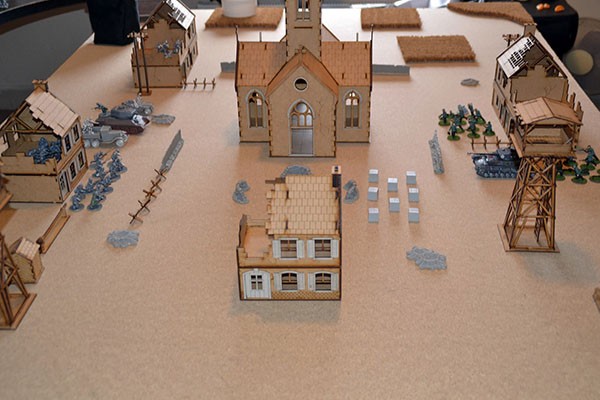 We tried to stay as neutral as possible, making sure each side as roughly an equal amount of terrain and buildings. Funnily, we both played directly for the objective so with the board being a 6 foot by 4 foot table, was literally reduced to a playing size of 3 foot by 4 foot which just made the game ever so more bloody! I won the roll off and declared to set up on the side with more terrain (so much for keeping it equal!) I wanted to deny him the cover more than anything, I kept my vehicles hidden behind church from the Panzer and put my other units within buildings and such, with the maxim over looking the courtyard. My opponent mirrored me but instead placed his truck and SS on the very outskirts of the map, this proved to be his mistake. 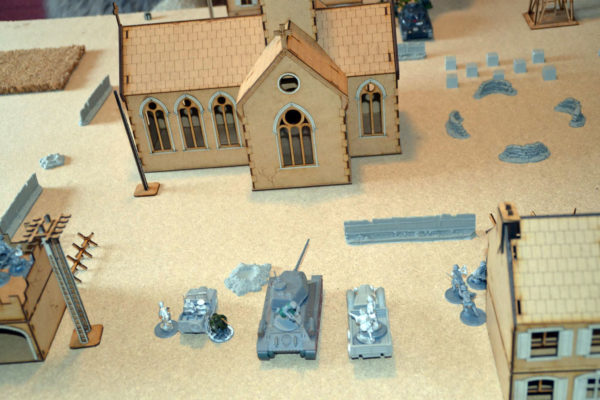 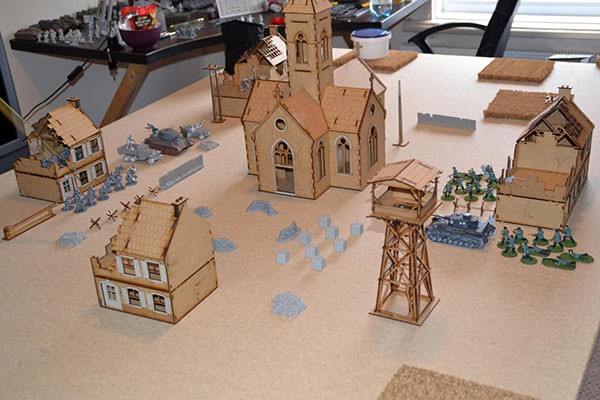 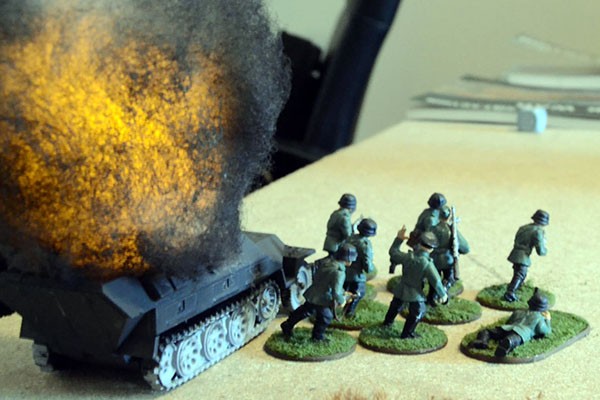 With the Soviets having more order dice, I understandably got the first turn and immediately moved up the T-34 to take a pot shot at the truck, I luckily hit it, but I didn’t penetrate…Luckily the maxim got the next dice and made up for the shoddy T-34 and destroyed the truck, killing the flamethrower squad and an SS solider, immediately taking two order dice out of the bag. Then the Panzer followed up and instantly took out the maxim, it was a worthy risk, points and order dice wise; I came out on top. The snipers opened fire but availed to nothing, the Russian target was out of range and the German sniper missed his target. Nothing else but maneuvering happened this turn. 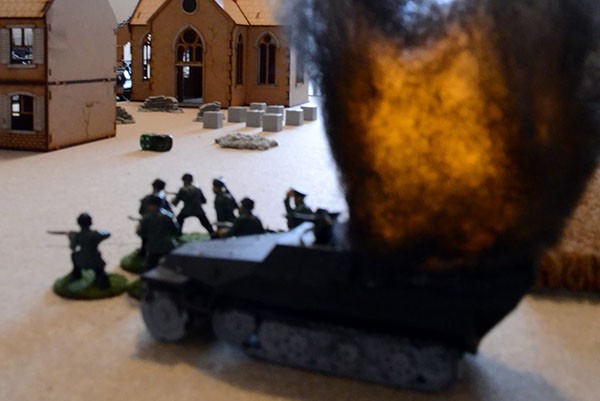 During turn 2 I fount myself to be in quite a pickle, the Panzer was precisely perched covering the courtyard and this was when it hit me, my t-34 was the only anti-tank I had, apart from the fodder with anti-tank grenades. The Panzer and T-34, in Bolt Action anyway, are roughly the same vehicle so any modifiers in any way massively shapes the outcome if they came to blows, of which they had to. The Panzer was also my opponents only anti-tank so it was clear that whichever tank came out on top, shapes the entire game due to their new invulnerability they’ll gain after the skirmish. 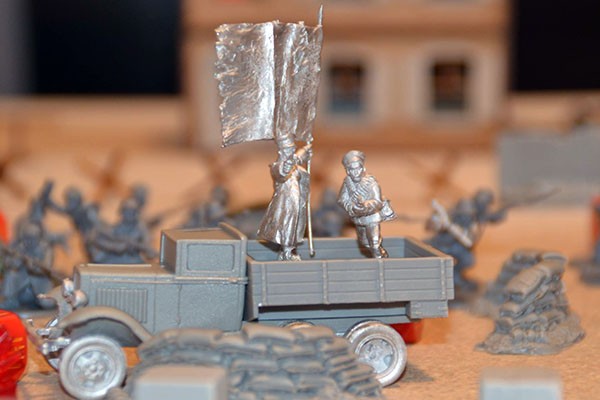 After my brief epiphany; I knew I had to control the church at all costs because then my Soviets would be safe from the HE from the Panzer. So I rushed my truck; which contained my Junior lieutenant and naval squad, with the tank riders, medic, free rifle squad and T-34 near the church entrance, I had to get control of the courtyard. One of my LMG units also ran towards the back of the church to then climb into it afterwards. Whilst this was happening, the Germans ran their SS unit behind the building and the entire German force opened fire on the Russian units, I only suffered a few causalities. The snipers caught scope of each other and opened fire, both missing… 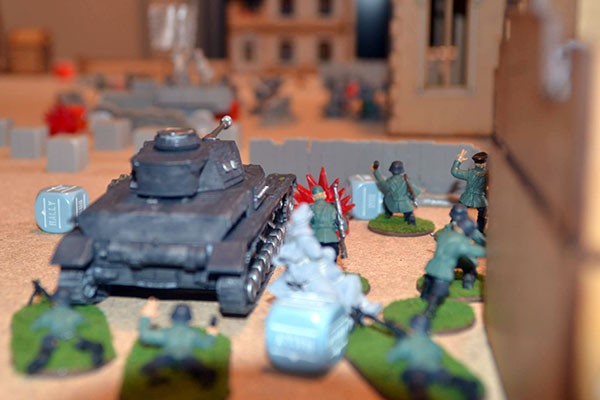 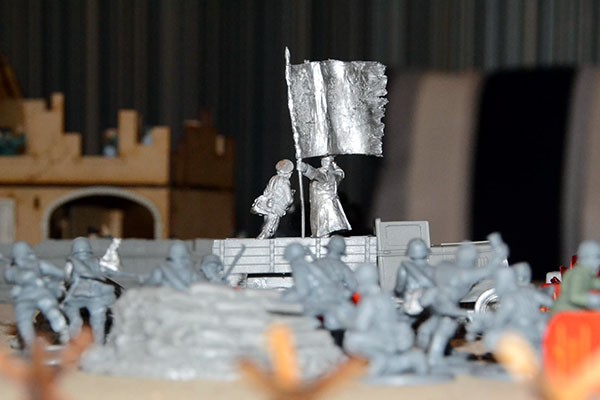 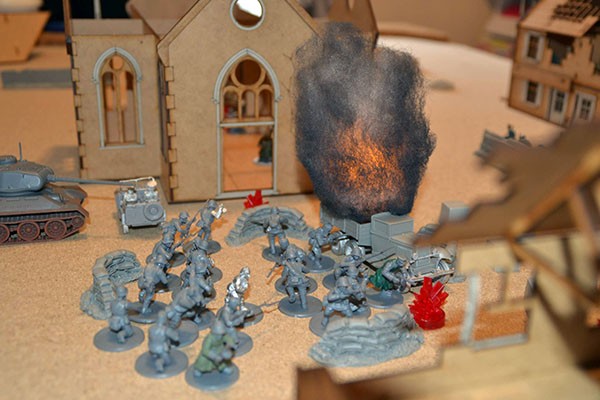 I moved the T-34 into position to take a shot at the Panzer as I figured I needed it to move otherwise it’ll get free MMG shots onto my advancing men and I wouldn’t be able to sustain the causalities. My T-34 was hidden whilst my truck took a full on hit from the Panzer, blowing it up and killing the junior lieutenant inside. My LMG squad moved into the church to effectively make it mine and set up near the window to have a bout with the opposing grenadier squad. The SS veterans brutally assaulted the Naval squad and instantly wiped them all out with the SS only taking a single casualty. However this left them dreadfully exposed…With all remaining units I opened fire, gunning them down to a single man, the NCO. The sniper duel commenced but resulted in a victory for the German sniper, now free to pick any target he chooses. 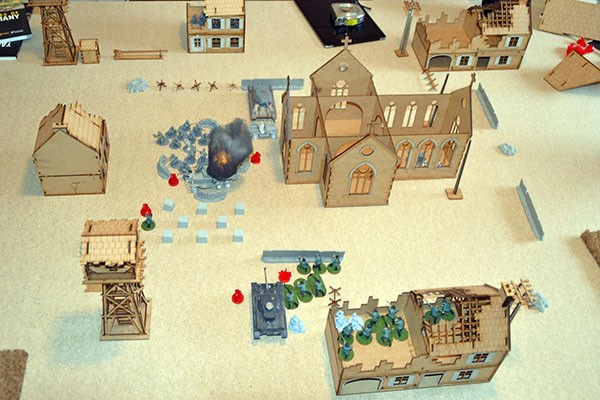 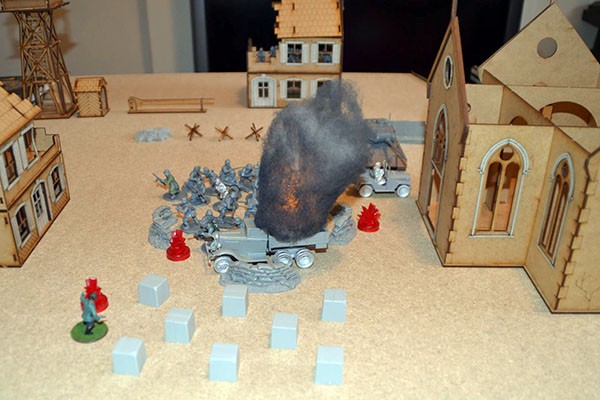 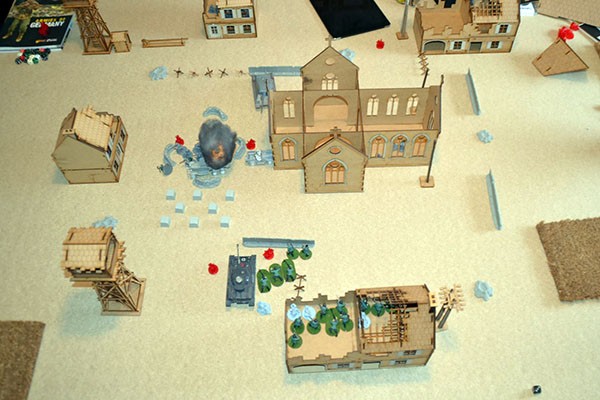 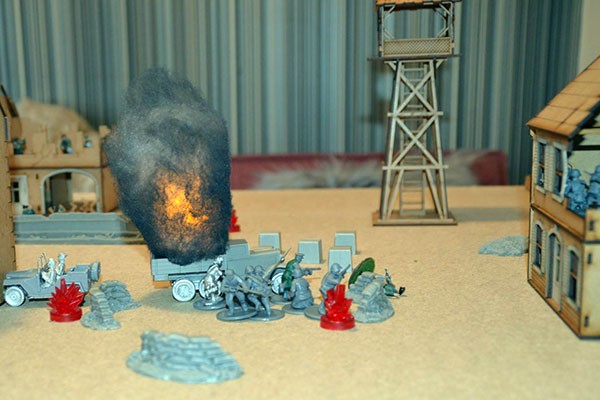 The tank duel commences and it led to the T-34 catching the ammunition of the panzer, igniting it into flames however the crew kept their calm and put the fire out; but it rendered the vehicle useless for the turn. The lonely SS NCO bravely charged into the tank riders as a final act of heroism, to only get gunned down on the spot. With the main objective contender out of the way, my opponent realised he must move his entire army forward or he will lose. More shots continued leading to numerous causalities for the tank riders and church camping LMG squad but also a grenadier squad as well. 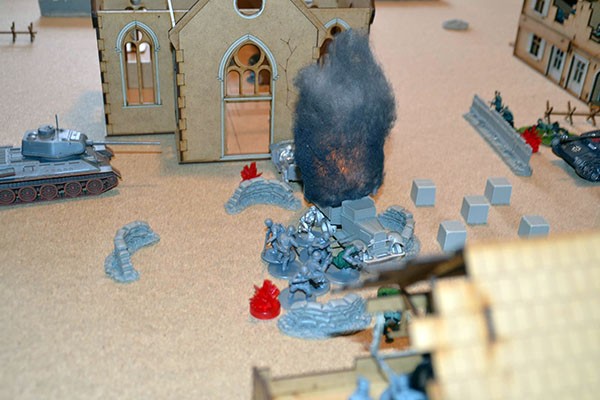 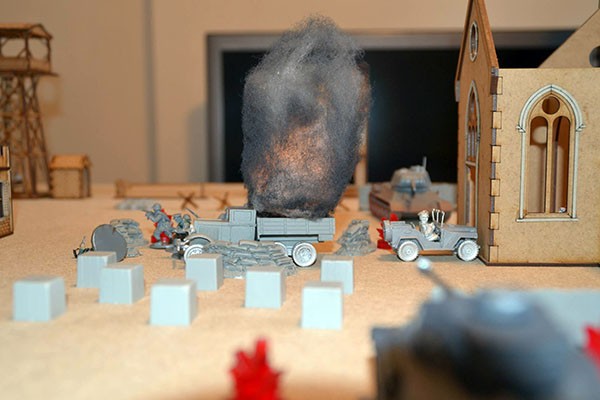 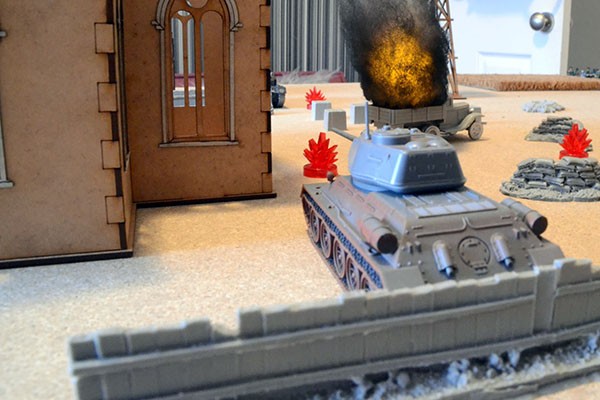 Yet again, the T-34 managed to shoot first putting the Panzer temporarily out of commission, the sniper precisely picked off an LMG member basically reducing their usefulness by half. He then rushed the remainder of his force towards the back of the church as a last ditch effort, to counter this I moved my tank riders, with the medic and senior lieutenant in the jeep into the church. Yes; the jeep revved its engine and powered over the steps and into the main church section in order to keep the medic and lieutenant safe from the predatory sniper. My LMG squad opened fire and wiped out the half strength grenadier squad. The free rifle squad took pot shots at the sniper but there was no way they can hit a sniper within heavy cover. 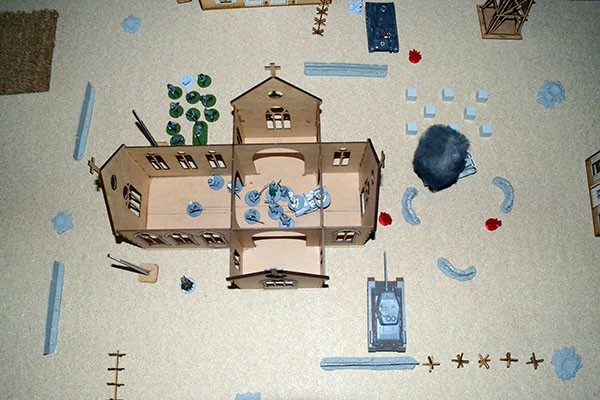 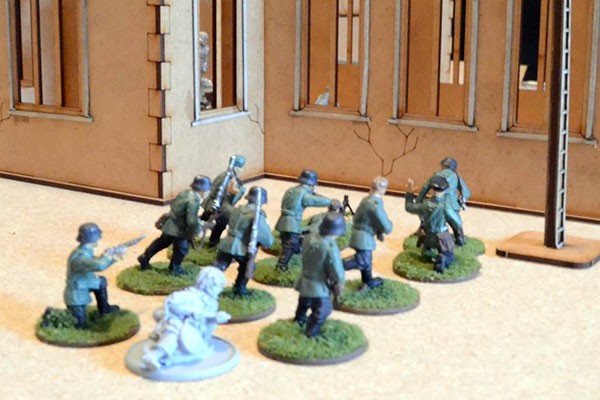 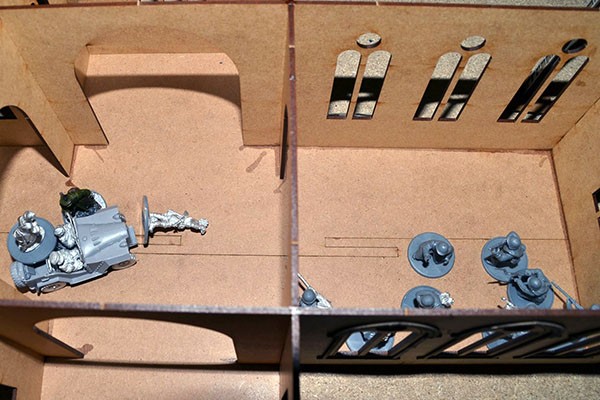 The duel was finally over, with the T-34 being the winner. The sniper was also taken out by an LMG squad which let his reign of terror end. The tank riders and LMG squad unleashed everything into the full strength grenadiers, killing all of them. The German medic attempted to take revenge and took out the remaining LMG in the church, to only get gunned down as well. The game ended there with all Germans being wiped from the board and the Soviet Union also taking control of the church at the end of turn 6. 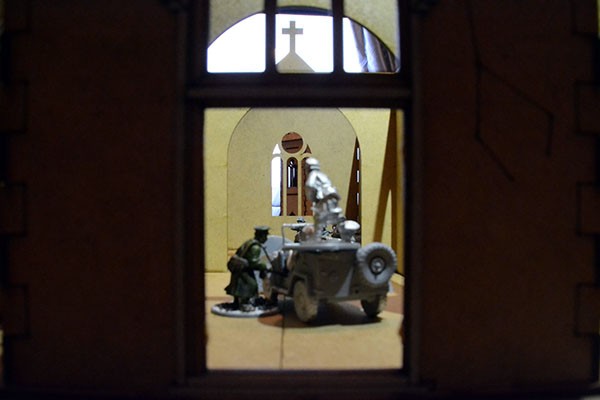 It was a decisive victory for the Soviet Union!Oooorah!

My list kind of worked, most of units played their role however some units were about as useful as a post, point for point, the T-34 is the winner for gaining just a kill point amount of 250ish, but the German sniper hit far above his pay grade taking roughly 150 points of Russians out. The shortcomings of both lists were evident and will certainly have a bit more variety and anti-tank capability. It was literally a war of attrition comparing the number of Soviets vs the power of the German soldier, which is what it usually turns into isn’t it?

Our next game will feature another 1000 point game, maybe 1500 but this time it will be a civilian rescue with a bit of a twist!