Background, Beyond the Gates of Antares

Beyond the Gates of Antares: Artwork unveiled!

Games Developer extraordinaire, Rick Priestley, has been locked away.

Fear not though – he isn’t (well, as far as we know…) being held at Her Majesty’s pleasure. No, Rick has secluded himself in his room, slaving away for two, sometimes even three hours a day putting the finishing touches to the manuscript for the Beyond the Gates of Antares rulebook.

Amongst all the rules and miniatures that are being produced we’ve also been working our artists hard to provide great looking illustrations for the rulebook. The most impressive piece to date is to be used as the cover of the Antares rulebook and boxed game later this year. It’s so good we just had to show it off!

Painted by Jon Cave, it shows a beleaguered Concord Strike Force making a desperate stand against the destructive Ghar…

We’re so delighted with the artwork that we’re making it available to you as a free Desktop Wallpaper! 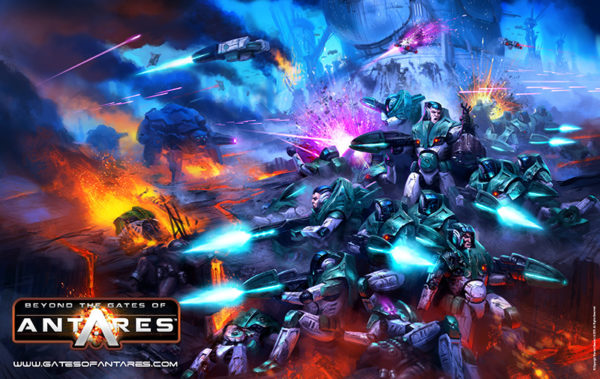 …and that’s not all!  There’s plenty more to come and this Friday’s Newsletter will also include another big update for the game….