Unit History: The Chosen Men of the British 95th Rifles

“They are Chosen Men, sir. Picked out for their special skills. That’s why they wear the white cords of courage.” Quote from the Sharp TV Series 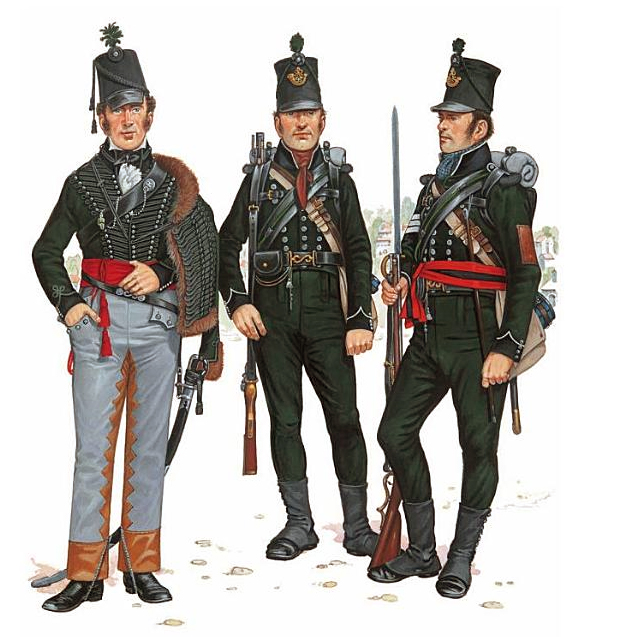 The 95th Rifles (later known as The Rifle Brigade) derive from a need of a change in the tactical doctrine of the American Wars of Independence. During this time of conflict the British line infantry were taking beatings from the American skirmish troops; this was due to the fact that the line infantry did not have enough time to react to the American skirmish troops when they attacked. Another problem seen at the time was that all troops were armed with the smooth bore musket, although it gave a good rate of fire for the time period (up to 4 rounds per minute) this was not very accurate weapon system. So it was the Experimental Rifle Corps was born.

Lieutenant Colonel Sir John Moore had an idea to use soldiers picked from other regiments (and volunteers) who showed initiative on the battlefield and in camp. They needed to be able to think for themselves (unlike their red coat counter parts) and were also chosen for being better shots. In the year 1800 the 95th Rifles were formed dressed in the ‘Green Jackets, Black Belts’ unlike the ‘Red Jackets and White Belts’ of their Line Infantry counter parts, were seen as somewhat an oddity by other units.

Instead of being called private soldiers, every man – from the colonel in charge of the entire battalion to the newest recruit – called themselves ‘Riflemen.’ 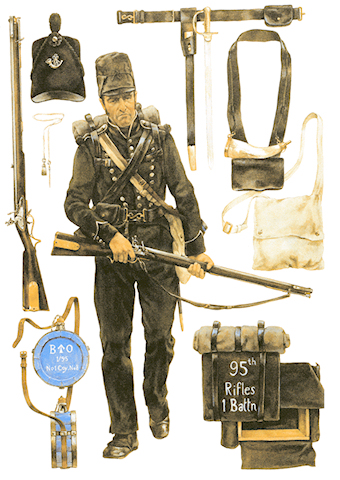 To be recruited into the 95th meant you were a ‘Chosen Man’ – these sharp shooters were armed with Baker Rifles, dressed in the Green Jackets with black belts, and given special training. These ‘Green Jackets’ became a very important part to Wellington’s tactics in the coming years of the Peninsular and Napoleonic Campaigns. 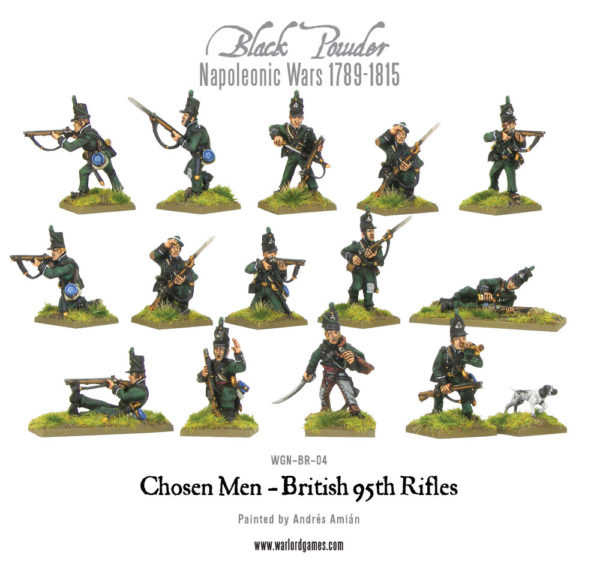 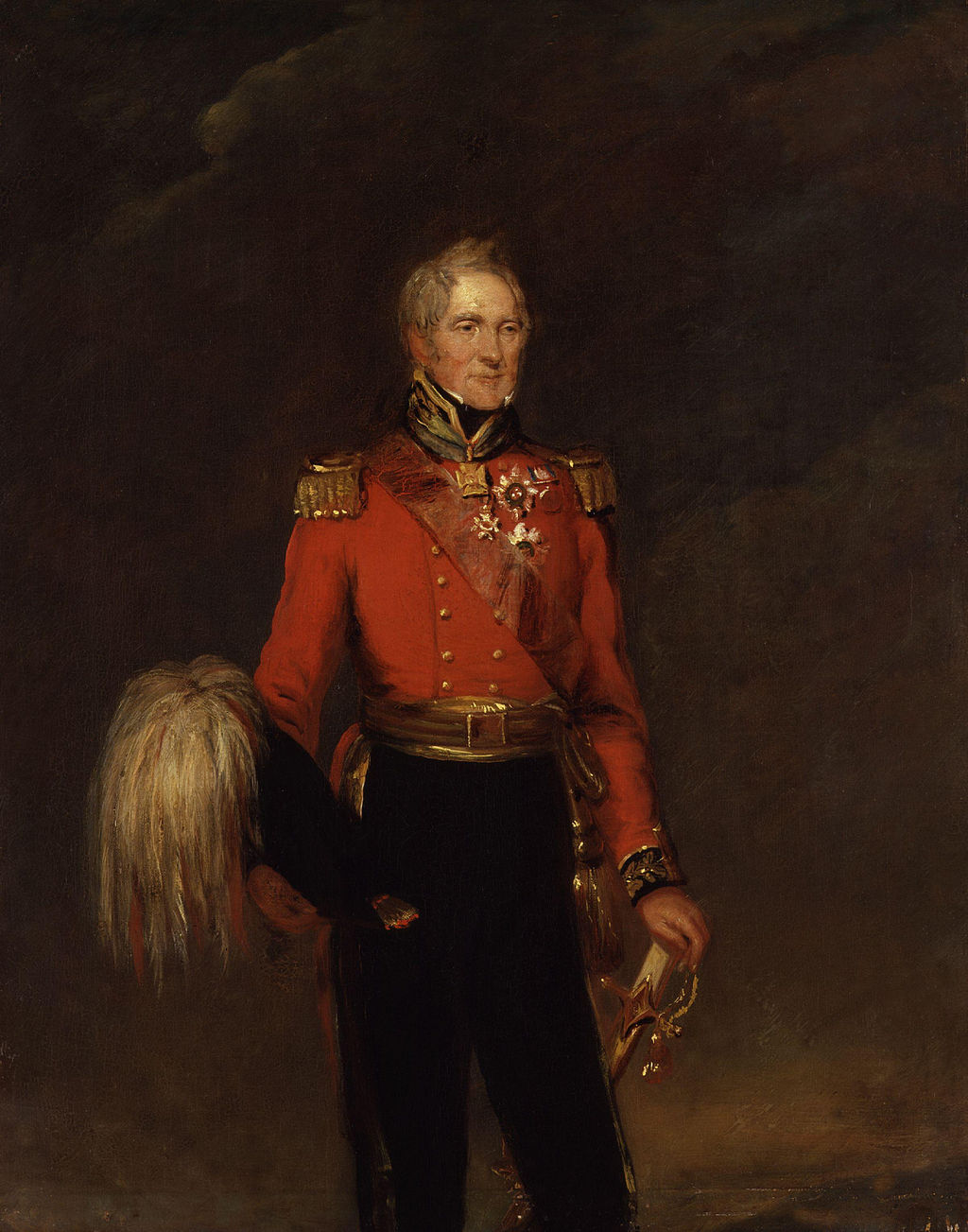 Sir John Moore was the founding father of all the Rifle Regiments. He was commissioned into the 51st foot (later the Kings Own Yorkshire Light Infantry) in March 1776 aged just 14. In 1790 he was commanding the regiment. In 1803, Sir John Moore was placed in command of the Light Brigade at the camp in Shorncliffe in Kent, Southern England; at this point the 42nd/53rd Oxfordshire and Buckinghamshire Light Infantry became the first Corps of Light Infantry, and joined the 95th Rifles (later ‘The Rifle Brigade’) to become part of The Light Brigade at Shorncliffe.

Once in Shorncliffe, Sir John Moore began to put his ideas into practice by training the 95th in these new tactics. These open order and manoeuvrability tactics replaced the rigid drills used in the red coated line regiments, and would be later adopted army wide. His new ideas included the use of camouflage and concealment by giving his troops green jackets and black belts to be worn; the jacket buttons were all black, to eliminate the shine given off by the traditional brass buttons of the line infantry’s ‘red jackets.’

The chosen men of the 95th were equipped with the Baker Rifle – which could not be fitted with the standard British army bayonet due to its bigger calibre. So instead every man from Rifleman to officer was issued a sword. Sir John Moore also wanted troops to have a better familiarity with his superiors so every man from the highest commander to the newest Rifleman when asked what they were the answer was always ‘Rifleman.’

These soldiers were trained to fight in pairs, use the ground for cover from enemy positions, they were all crack shots, so even though they only got 2 shots off per minute every shot would be an enemy NCO or Officer dead. If the rank structure was taken out of the equation then the private soldiers would not fight. The Light Brigade instead of marching at 120 paces to the minute they marched at 140, there was no slow march and most tasks were completed at the double. Their drill movements all start and finish in the ‘at ease’ position.

There is no attention order given to a Rifle unit, the words of command are as follows; if a unit is to be marched from a location it is formed up in the 3 ranks but the order is given as ‘Company stand Ready!’(Or Platoon or Battalion or whatever the unit is being marched) this tells the troops to prepare to move. Then the order given is ‘To your left/right march!’ and when given an order to halt the order is ‘To your left/right halt’ and the unit will halt turn to face the given direction and stand at ease. The rifles were only ever carried in the shoulder or in the trail; more often the soldiers of Rifle Regiments carry their weapons in the trail. The reason for this was so they were always ready to fight. The actual march was done as 6 paces at the march, 6 paces at the double, 6 paces at the march, 6 paces at the double and so forth. The 95th Rifles also has no colours, this is unique to all the Rifle regiments even of today. They carried no colours like the line infantry battalions did and still do on ceremonial occasions.

Reference
The Rifles – Regimental War Tales (out of print) 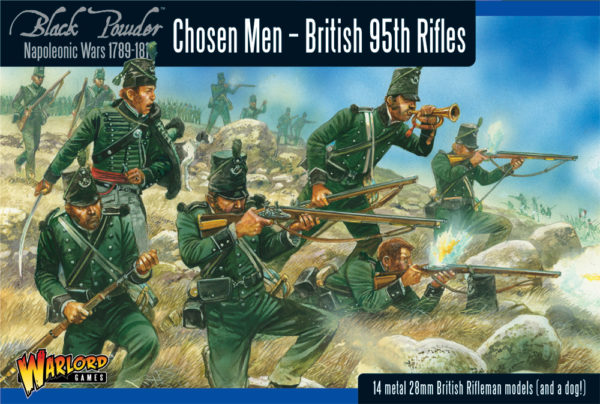