Unleash the wrath of the Russian Bear! Monstrous reinforcements for the Red Army have arrived in the form of Ursus Infantry with Clubs! 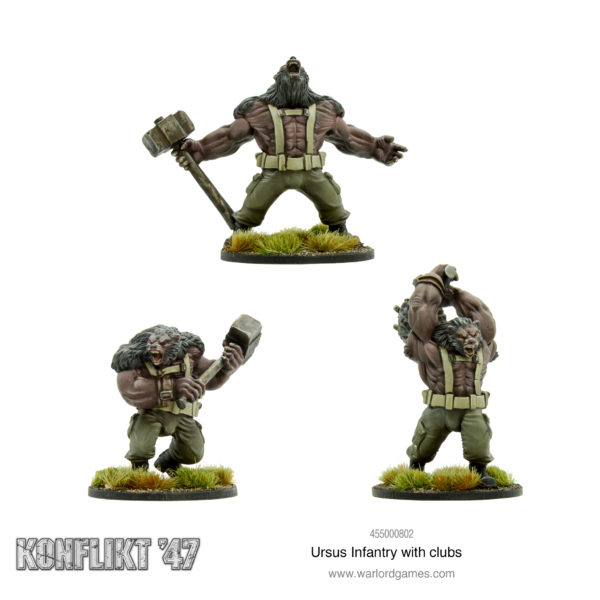 Developed to counter Enhanced Infantry, these 8-foot-tall Human/Bear hybrids give the Red Army a terrifying presence on the battlefield! As if teeth and claws weren’t enough, these Ursus sport massive clubs, capable of crushing a man to a bloody pulp! Devastating when unleashed, but difficult to control, the Red Army’s Ursus Infantry units were often used to tip the balance of power in brutal close-quarters engagements.

Your opponents are sure to fear these terrifying brutes and make them the focus of their firepower, so keep them protected – give them a truck to carry five of them into the heart of the enemy, or shield them with waves of infantry while they get to grips with the foe. Once the Ursus Infantry enter combat, the enemies of the Soviet Union will be smashed aside! 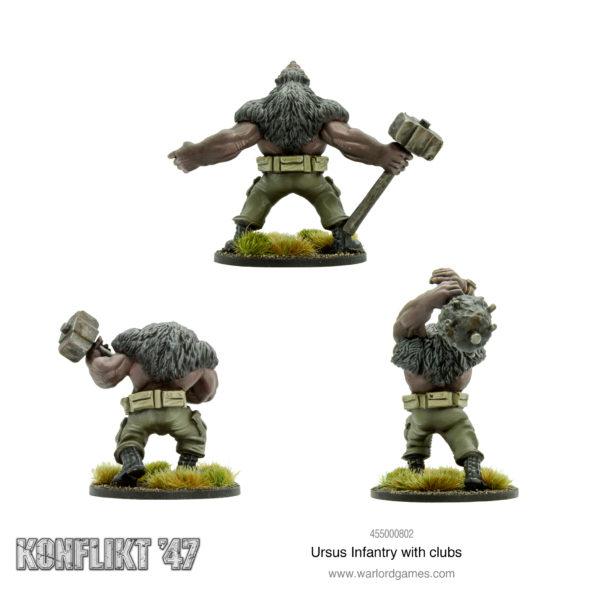 Within the Red Army

If you want to make your opponent cry, consider loading a couple of squads of five Ursus Infantry into trucks, and charging headlong into the enemy ranks!

If instead you’re after a more tactically flexible force that offers a fun challenge, consider using them as heavy hitters in an infantry-centric list. Your opponents will want to get rid of them as quickly as possible, so give them plenty of targets to shield the bears! A list at 1000 points might look something like this:

This force, while not the fastest, ensures your opponent has plenty of targets that they can’t ignore – before they know it, your Ursus Infantry will be on top of them, ably supported by the armoured might of the T34/ZP and the waves of Soviet footsoldiers. Additionally, all of your infantry squads and teams (except the flamethrower) can be made from a single box of Soviet Infantry, making this an economical list to put on the table.

Forwards, for the Motherland!

Dan can often be found contemplating the mound of unpainted minis building up under his desk. He has a tendency to roll lots of ones. He also has a tendency to complain about rolling lots of ones.
View Profile | View all posts by Dan Hewitson
Collecting Konflikt ’47: Frostbite Alley
Korean War – Chinese Peoples Volunteer Army