This fantastic display piece was created by James Elmore of the Miniature Building Authority. James explains how he did it:

My duties as designer and modelmaker for the Miniature Building Authority allow me to build models of almost everything imaginable. For my personal hobby, I also build models. Of almost everything imaginable. When I build armour, I prefer to build small scale, obscure subjects as that lowers the odds of informed criticism! With that in mind, I was drawn to Bolt Action’s Ram Kangaroo. 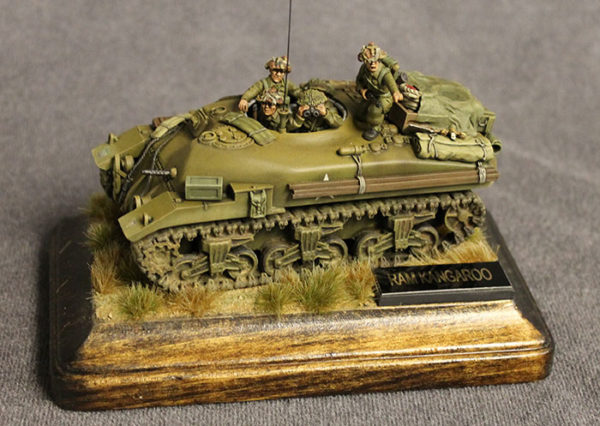 The Ram Kangaroo was an armoured personnel carrier built and used by the Canadian Army in WWII. Although it appears to be an M4 Sherman without a turret, it was based on the Canadian designed Ram tank. 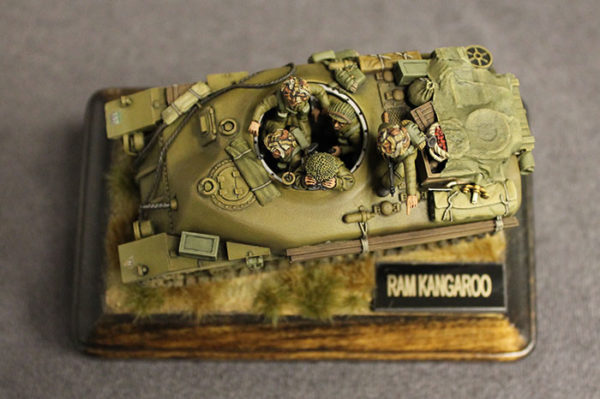 The kit is resin and metal with about ten parts, plus a small sprue of plastic troops. Thel quality of the vehicle parts was very nice for a gaming piece, but I had a more ambitious goal.

The hull of the model is a single, solid piece of resin, with the “turret ring” recess about 6mm deep. This would allow troops from the waist up to ride in it, but not full figures. After studying the piece a while I began the slow process of hollowing out the hull. I first cut two longitudinal slots along the bottom using a small tablesaw (I do not recommend this to inexperienced craftsmen). After several passes with the saw, I had a square opening on the bottom about 20mm deep. Several careful hours with a mini-drill and grinding bit finished hollowing out the inside of the hull. I did find some information on the internet that allowed me to scratchbuild an interior to a fair level of detail. As it turned out, none of that can be seen, but I know it is there! 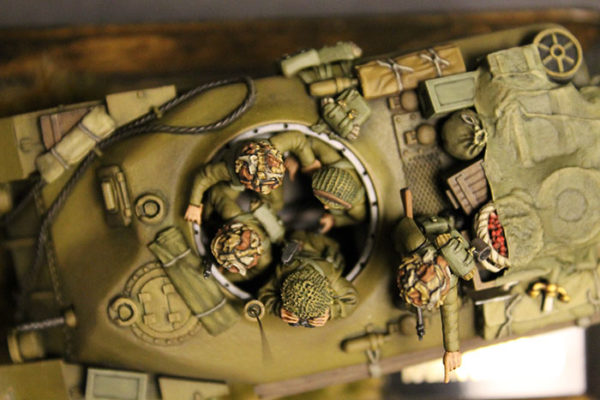 I limited my replacement of surface details to the headlights. I also added details to the tow clips and mudflaps in the rear. A tow cable completed the vehicle itself.

I particularly enjoyed adding all the troops’ gear- that was the original reason for the project. Some of it is from the kit, some from my parts box and some scratchbuilt.

Paint was Polyscale acrylic (sadly now out of production), airbrushed over a black base coat. Unit marking decals were done on my computer and printer. Watercolour washes, drybrushed highlights and pastel dust completed the job. 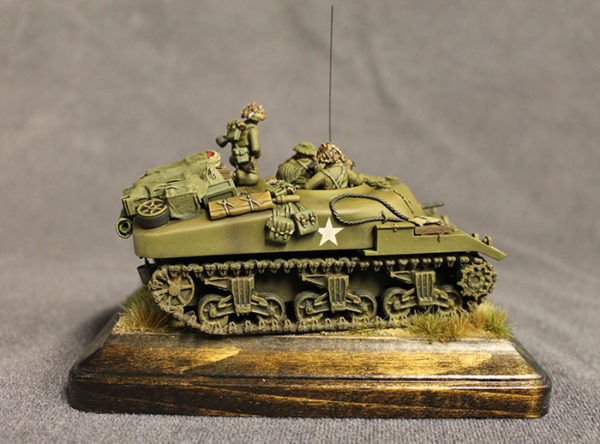 The Bolt Action plastic multi-pose figures were perfect for the job and required little special effort to fit in the vehicle. I also added a metal figure from Bolt Action’s “British Army Forward Observer Officer” set. Paints are from Reaper and Vallejo. I did learn that Canadian uniforms were a bit more green in color than the British.

Always intended as a static display piece, I used celluclay and sand for groundwork on a wooden base. A final touch was some grass from Army Painter.

This was a very pleasant project and I congratulate Bolt Action for their very fine kit. 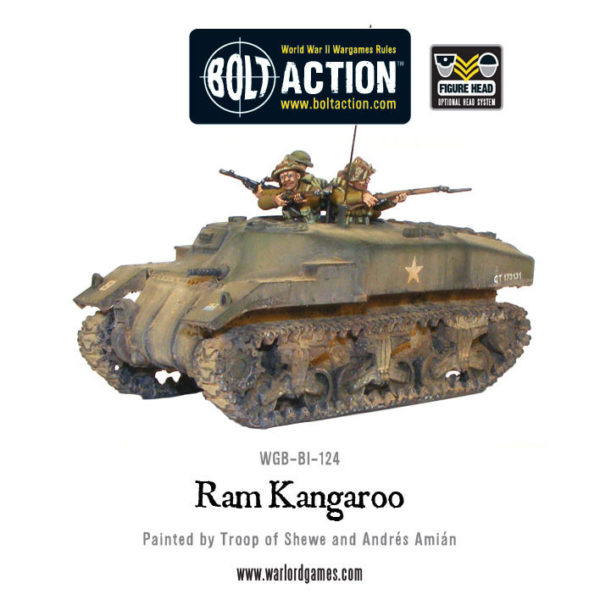