A 118 gun ship of the line, Orient was the flagship of the French fleet at the Battle of the Nile, where she was destroyed in a spectacular explosion.

Orient was of the Océan-class of ships. These were a series of 118-gun three-decker ships of the line of the French Navy, designed by engineer Jacques-Noël Sané. Launched on July 20, 1791, she was originally named the Dauphin Royal, but having come into service during a time of great political upheaval, she was promptly renamed. As a tribute to a political movement, she was dubbed the Sans-Culotte. She retained this name for three years before it also became contentious. 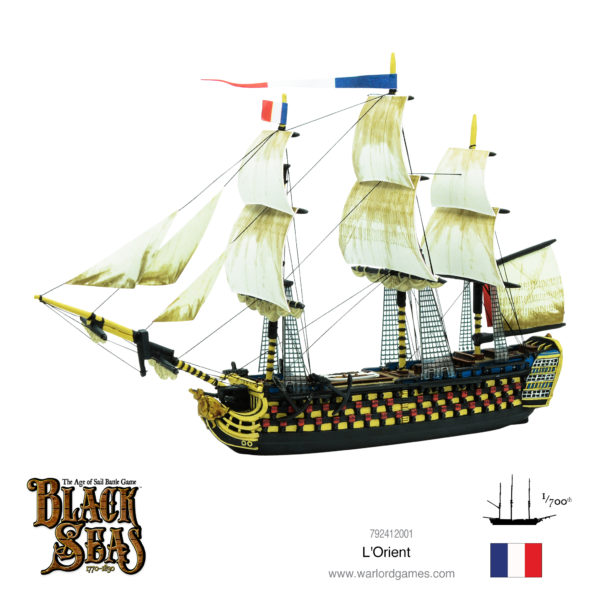 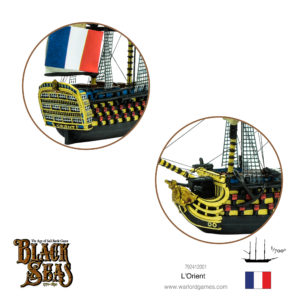 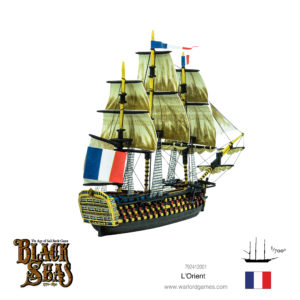 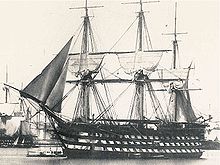 Océan-class ship of the line

Prior to receiving her final name, the Sans Culotte served as the flagship of Rear Admiral Martin at the Battle of Genoa, serving at the rear of the engagement. Though she exchanged fire with British third-rate vessels, she lost contact with the fleet at nightfall, taking no further part in the action. The French fleet, though having lost two ships, managed to break from their pursuers mid-afternoon the next day, and were re-joined by the Sans Culotte. The engagement, therefore, ended in a minor British Victory. The French objective had been to re-establish some control of seas to the south of France following the British capture and subsequent burning of the French Mediterranean fleet 18 months earlier.

In May 1775, the French ‘counter-revolution’ provoked the vessel’s final, and best-known renaming to Orient.

In 1798, Orient was appointed flagship for the Invasion of Egypt, part of Napoleon’s wider Mediterranean Campaign. Under the command of Admiral Brueys, Orient ferried the chiefs of the Armée d’Égypte, including General Bonaparte. The fleet successfully circumvented the British blockade and captured Malta, before landing troops in Egypt. The fleet subsequently anchored in Aboukir Bay, east of Alexandria.

Battle of the Nile

On the afternoon of 1st August, a British fleet, under the command of Rear-Admiral Horatio Nelson, discovered the French fleet after 2 months of hunting it. In the early evening mere hours after first spotting the French, he attacked, splitting his fleet into two divisions. One passed between the anchored fleet and the shore whilst the other engaged from seawards; entrapping the French ships in a devastating crossfire. 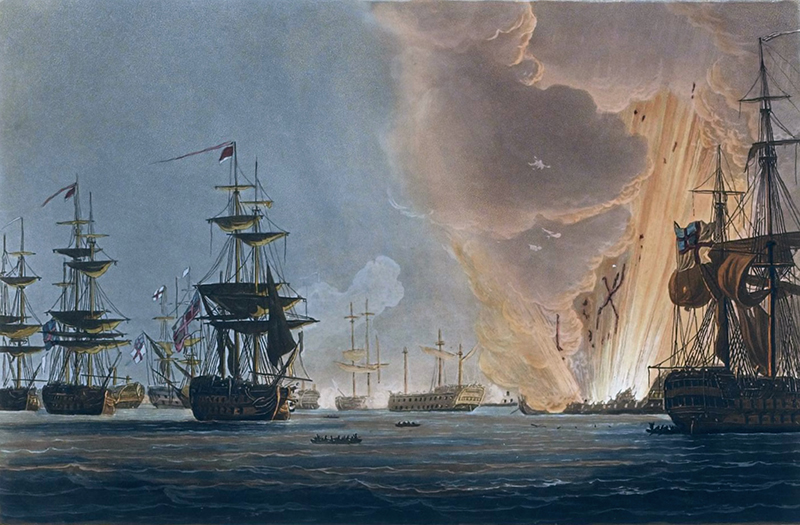 Battle of the Nile, August 1st 1798, painting by Thomas Whitcombe

Orient, at the heart of the French fleet, traded heavy fire with HMS Bellerophon, and with the weight of its broadsides, managed to significantly damage the vessel and force its withdrawal. However, it suffered heavy damage in return and the French Admiral Brueys had been killed; almost severed in two as he was struck by a cannonball.

At approximately 9 pm, the British observed a fire onboard Orient and capitalised on this by pouring firepower into the stricken vessel. This succeeded in spreading the blaze throughout the ship. Around an hour later, the fire reached the on-board magazines, detonating the ship in an explosion so violent that night briefly turned into day. Falling wreckage spread over a wide area, setting fire to several ships (although these fires were subsequently extinguished). This ceased hostilities for ten minutes whilst crews recovered from shock or desperately attempted to extinguish fires. 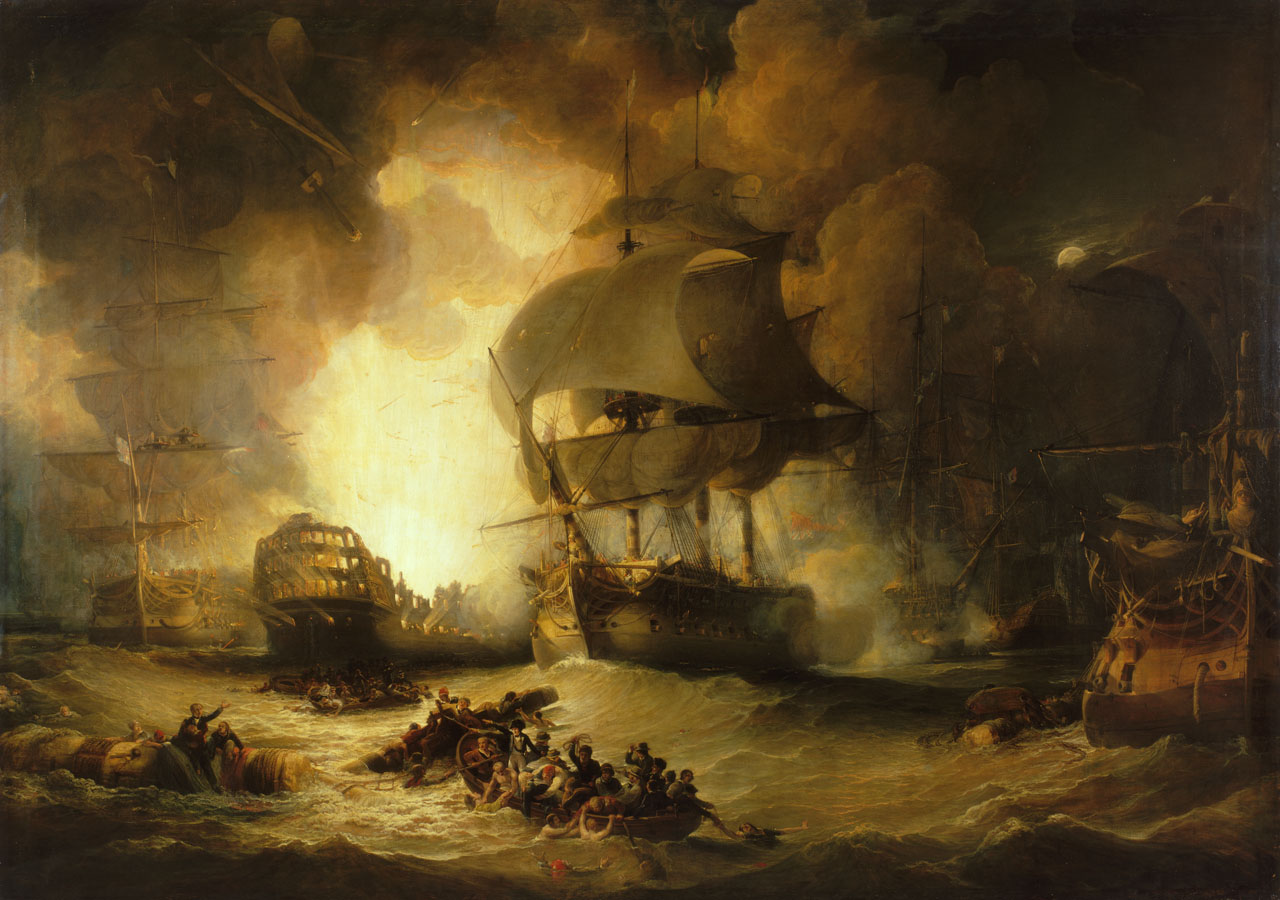 The British victory at the Battle of the Nile effectively swung the fortunes for the Royal Navy in the larger conflict in the Mediterranean. The destruction of the French flagship became the defining image of war at sea for the age. It resonates particularly throughout art and literature, with numerous artists having recreated the scene.

Orient is an extremely powerful 1st Rate Flagship on the tabletop. Woe betides the enemy that suffers the full brunt of her broadside. Remember that you can only take a limited number of 1st rate ships in a Black Seas fleet, therefore Orient provides an impressive and powerful centrepiece for your French fleet.

She also receives a very characterful set of special rules in the game, gaining a combat bonus when facing British ships, and if should she ever catch fire, she will have an increased chance to explode as per her famous historical demise. 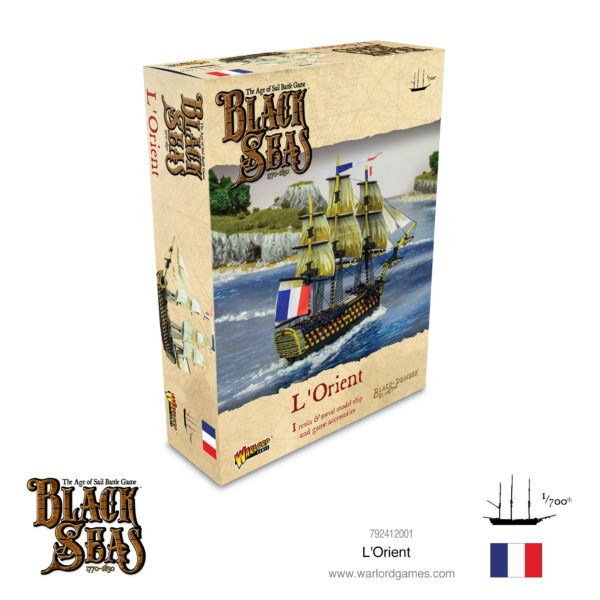 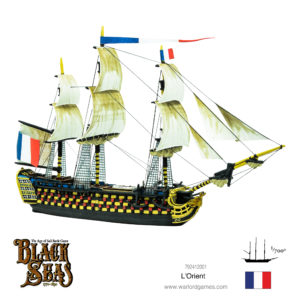 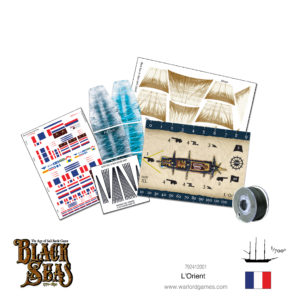