A 104 gun ship-of-the-line, HMS Victory was the flagship of the Royal Navy fleet at the Battle of the Trafalgar, Great Britain’s most famous naval victory.

HMS Victory was a terrible and awe-inspiring sight to both enemies and allies. It has become one of the most famous ships in the world and is still in commission in the Royal Navy to this day; as of 2019 a total of 241 years of service. 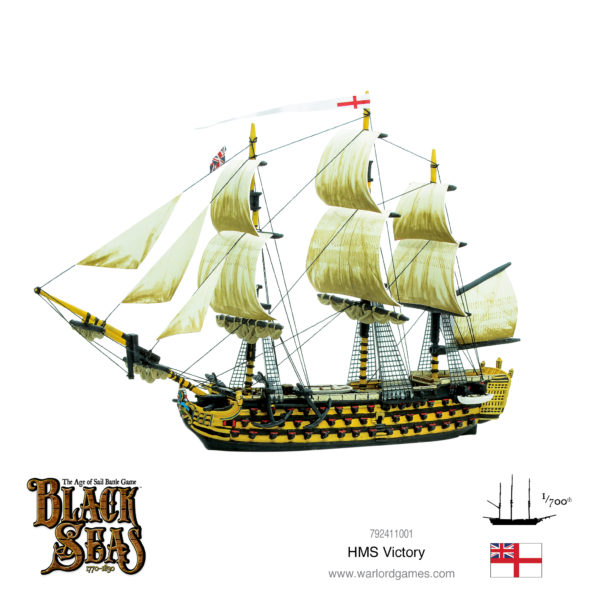 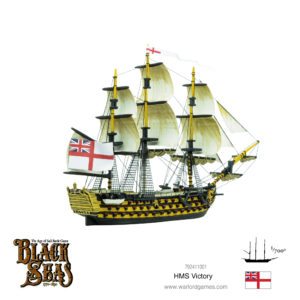 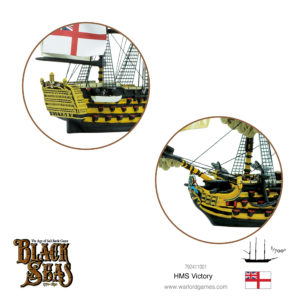 HMS Victory was a First Rate Ship-of-the-Line, the most powerful type of ship of her day. She had three gun decks mounting 104 guns. The Royal Navy had always built very large ships to fight major fleet battles. The French and Spanish navies did not tend to build First Rates until after the American War of Independence in 1783. Though launched in 1765 she was not commissioned until 1778. This long period of weathering meant her timbers were well seasoned and are a major reason for her long life. 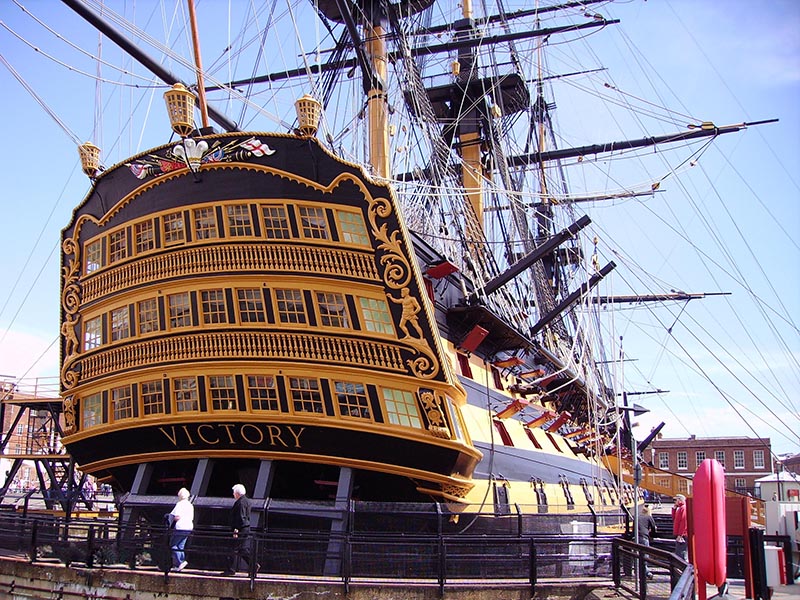 Over a period of 34 years, between 1778 and 1812, HMS Victory took part in five naval battles. Commissioned for service in the American War of Independence, Victory fought in the First and Second Battles of Ushant and the Battle of Cape Spartel. During the French Revolutionary War, she was Admiral Jervis’ flagship at the Battle of Cape St Vincent.

In 1805 she achieved lasting fame as the flagship of Vice-Admiral Nelson in Britain’s greatest naval victory, the defeat of the French and Spanish at the Battle of Trafalgar.

England Expects That Every Man Will Do His Duty 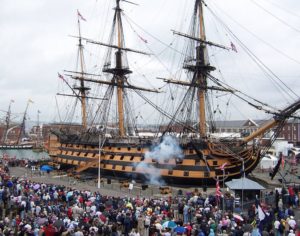 Early in 1805, Vice Admiral Lord Nelson commanded the British fleet in a protracted blockade of Toulon. The French fleet successfully evaded Nelson’s when storms disrupted the British blockade. Following a swift search of the Mediterranean, Nelson realised that the French had crossed the Atlantic Ocean towards the Carribean. He thus set off in pursuit.

After pursuing the Admiral in charge of the Franco-Spanish Fleet, Pierre-Charles Villeneuve, to the Caribbean and back, Admirals Lord Nelson and Collingwood finally engaged the enemy. On the 21st of October 1805, just off the southwest coast of Spain, west of Cape Trafalgar, near the town of Los Caños de Meca, the two mighty fleets engaged. The French fleet was in disarray, and Nelson had devised an unorthodox tactic in an attempt to conclusively defeat the Franco-Spanish fleet.

Nelson organised the British ships to sail perpendicularly across and through the French line. This meant that each British broadside was met by limited French counterfire.

For 40 minutes, Victory was under fire from the enemy ships of the line Héros, Santísima Trinidad, Redoutable, and Neptune. She cut the enemy line between Villeneuve’s flagship Bucentaure and Redoutable; cutting a devastating broadside against the flagship, before engaging the 74-gun Redoubtable directly. The melee resulted in the two vessels locking masts. Nelson was shot by a French marksman from the Redoutable at the height of the battle and was carried below decks. 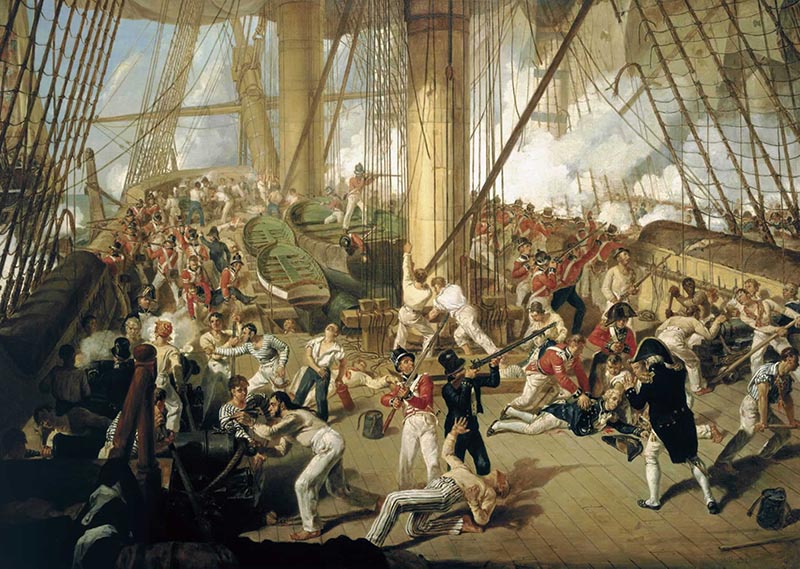 Nelson is shot on the quarterdeck of Victory – Denis Dighton

As the crew of the Redoubtable prepared to board HMS Victory, the 2nd ship of the British windward column, HMS Temeraire, emerged from the smoke and poured devastating carronade fire into the starboard side of Redoubtable. Its Captain, with less than twenty per cent of his crew fighting-fit remaining, surrendered.

More and more British ships entered the battle, gradually overwhelming the remaining allied ships. Nelson did not die until 16.30, well after British victory was already assured. Out of a crew of 821, Victory suffered 57 men killed and 102 wounded; a significant number for a battle of this type.

Though he himself perished, Nelson’s fleet captured or destroyed 22 enemy ships, for no losses. Some of the captured vessels were destroyed, however,  in the aftermath of the battle.
Nelson’s body was borne home aboard his flagship. After lying in state at Greenwich, he was buried in St. Paul’s Cathedral on 9 January 1806. 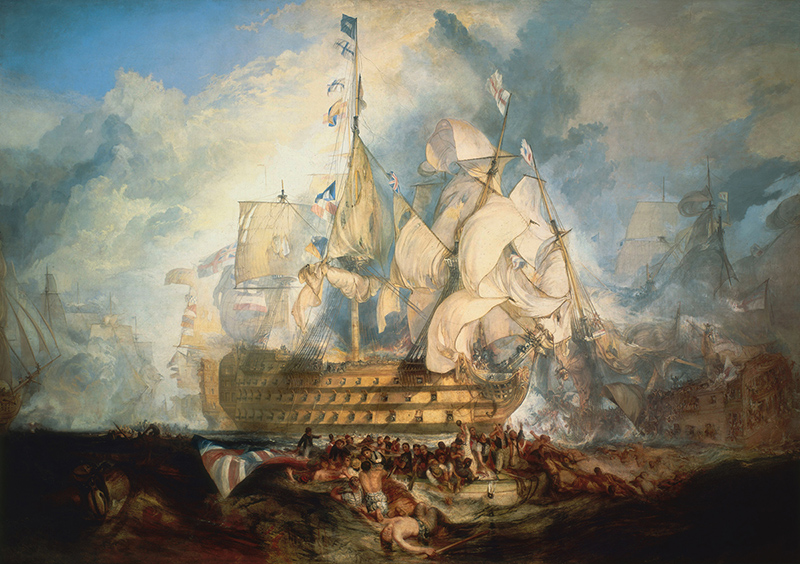 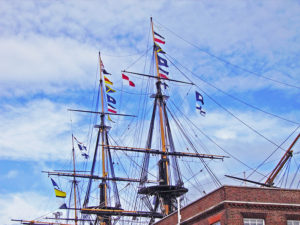 Nelson’s signal, “England expects that every man will do his duty”, flying from Victory on the bicentenary of the Battle of Trafalgar

HMS Victory herself suffered in the battle, and at forty years of service was refitted as a second rate in 1807. She did not see further combat. After further service in the Baltic and off the coast of Spain, Victory was put into reserve in 1812 in Portsmouth. The ship had struck the public’s chord, and any threat of decommissioning the ship resulted in public outcry. To this end, HMS Victory remains a commissioned vessel of the Royal Navy to this day.

H.M.S Victory is a potent force on the tabletop. Aside from a formidable array of weaponry and fantastic resilience, her inspiring presence confers a bonus to all nearby friendly ships when they are required to take a skill test. If Nelson is present, this bonus is augmented yet further! 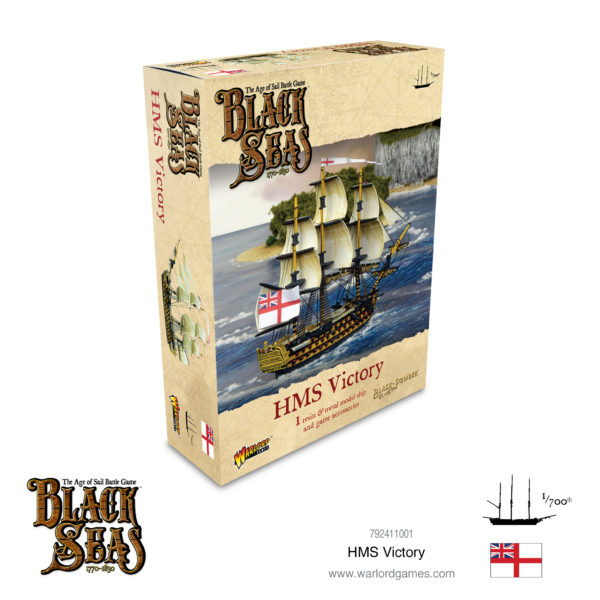 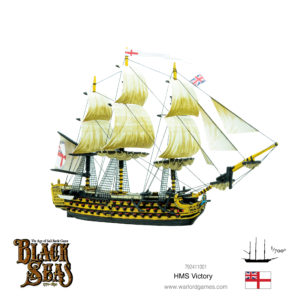 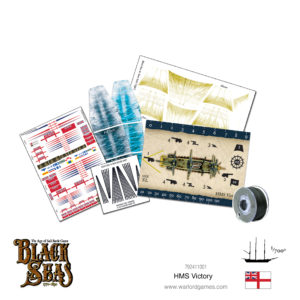