Beyond the Gates of Antares, Doctor Who Miniatures Game, Latest News

Over the past few months, the Beyond the Gates of Antares Facebook group has not only become a hub of all Antarean activity – regularly flooded with photos of the armies and projects of the Antares community, but also regular updates, previews and input from the likes of the game’s creator – Rick Priestley, and the head of the Warlord Games design studio, Paul Sawyer…

The community have been hugely receptive and responsive to the regular studio updates, so we’ve decided to trial-run sending them out via the Newsletter, to keep the wider Warlord community ‘in the loop’ with the latest Antarean news… and – who knows – maybe news from another system or two while we’re at it…. 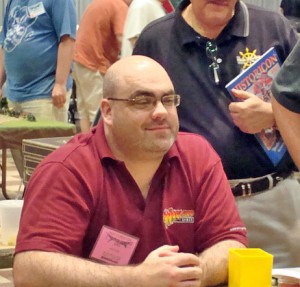 Andres has finished painting the Ghar Attack Scutters as well as the Freeborn version of the C3M4 combat drone. He’s spent the rest of the week building scenery for the Xilos campaign supplement.

Wojtek finished the Boromite Guildess character to be introduced in the supplement. Her name is Arran Gestalin – some of you will recall the name from fiction in the Antares rulebook. He’s now developing a new troop type for the Isorians which will be something a bit out of the ordinary…

With the first batch of Doctor Who figures under her belt, Kirsten will now turn her attention to painting the Freeborn Hound Probes and the Freeborn Striker attack skimmer.

Russ has been producing more for the variant army list from the supplement. These are looking really tasty now!

The first 85 pages of the supplement have now been laid out and Anna has been working on new graphics for it.

Beyond the Gates of Antares594 Doctor Who23