A few weeks ago I (Alessio) met with Annie and Gareth White, and asked them to star in the very first photographic battle report for Terminator Genisys, the Miniatures Game – they were very excited at the idea. Here’s a very natural, and absolutely unposed, classic ‘rolling the dice’ picture: 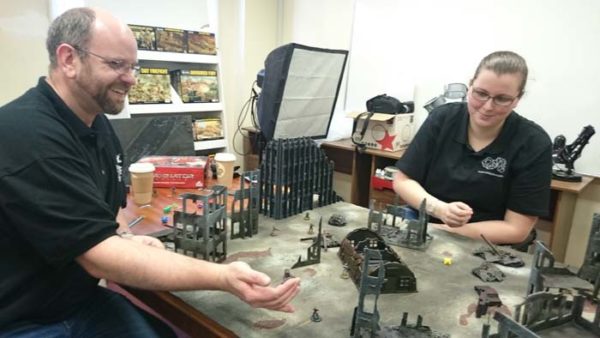 They picked forces to 750pts, because we thought that was a nice way of representing a 500pts force out of the War Against the Machines box that had been expanded with an additional 250pts.

Gareth’s force consisted of 22 Resistance soldiers (2 with shotgun and dog, 3 with AT rocket launcher, 3 with grenade launcher, the rest with plasma rifles), 1 Lieutenant, Kyle Reese, John Connor and 2 extra TDDs (one upgraded to D12).

Here John Connor leads his men into the fray, sneaking behind a Terminator’s back: 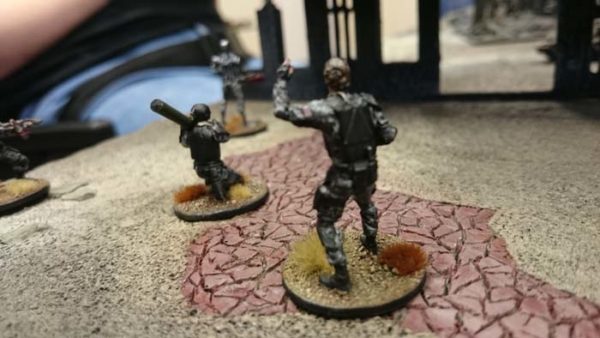 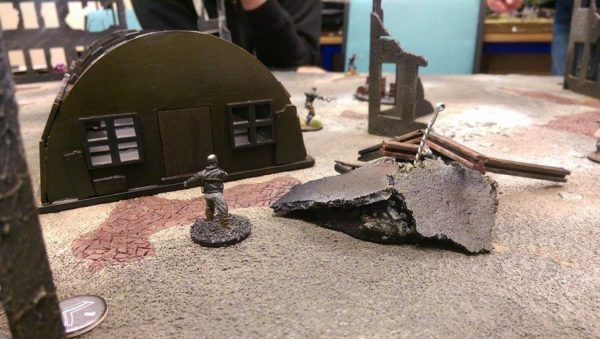 The game was played on a 4′ x 3′ playmat with terrain made by Gareth and Annie themselves (you may recognise some of those, as they have been used in the rulebook!).

Rather than rolling for them, we chose our favourite mission and set-up: Mission 6 – Retrieve and Set-up 6 – Fog of War. During playtesting we had a lot of fun with that combination.

The vital piece of evidence we were going to fight over was an endoskeleton’s skull which clearly included super-secret information about a new Time Displacement Device.

The objective was initially set in a big corrugated iron type of building that was in the centre of the table, and all the forces converged on that building, while at the same time trying to inflict maximum damage onto the enemy.

Of course, the Resistance were trying to move from cover to cover while doing this, while the endoskeletons simply moved towards the objective out in the open: 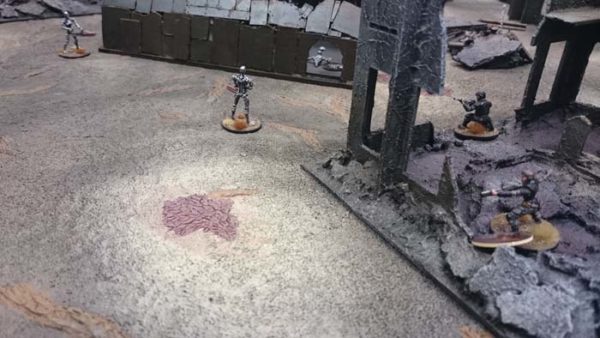 A Resistance Soldier was the first to enter the building, followed by the Command Endo. The brave soldier managed a nice hit on the endoskeleton but sadly ‘it was back’, and just lost its legs: 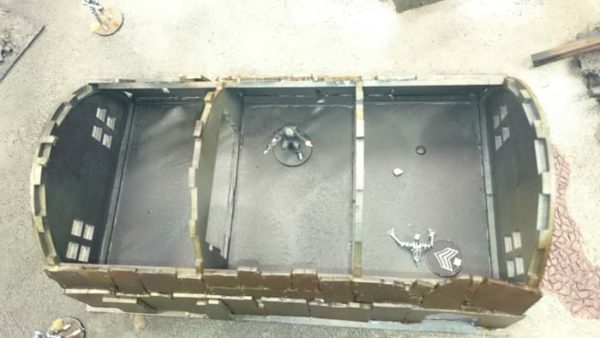 The Command endoskeleton signalled for help, and things very quickly got worse for the human. Much, much worse: 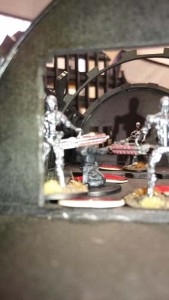 After terminating the puny human, one of the endoskeletons picked up the skull and started to move towards the edge of the table, but of course he was immediately targeted by a hail of plasma bolts and grenades/rockets: 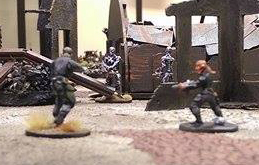 This withering hail of fire from the humans eventually brought it down. The objective/skull scattered in a random direction (thanks to the D10!) and the action ebbed and flowed as more of the models in reserve turned up, often in the most hilarious of places!

The humans organised a nice counter-attack and got the skull, but much like the endo, the human carrying it was soon cut down: 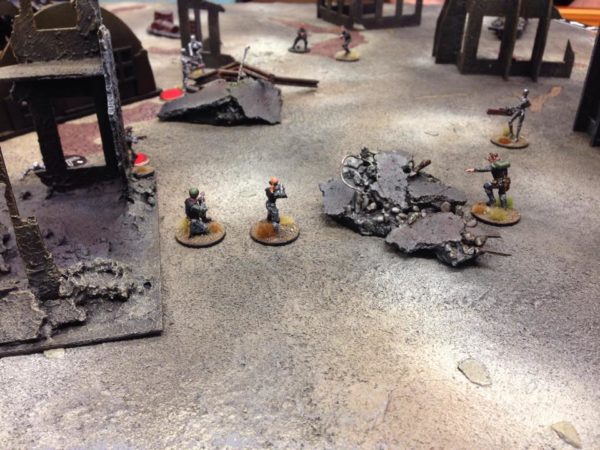 As the turns piled on, with the skull being grabbed again and again, only to be thrown around by exploding models, there were a couple of critical moments: the humans lost John Connor and his lieutenant, and only Reese kept them in the fight, while the cowboy endoskeleton also bought it. Our casualties area was really stacking up: 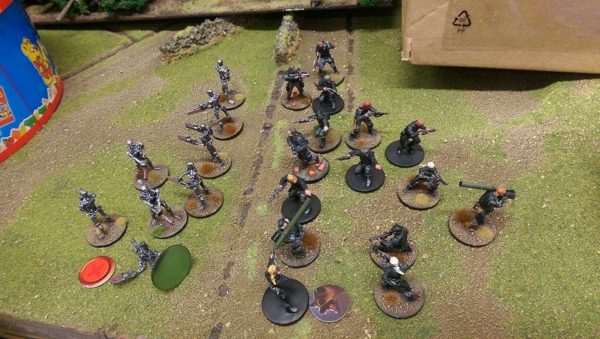 At the end of turn 5, the objective was very near the table edge, and an endoskeleton was set to grab it and run out with it: 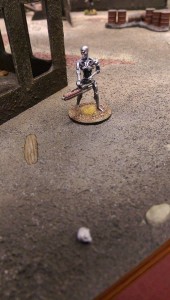 The game continued to turn 6, the endo picked up the skull and was hit several times by everything the Resistance had left to throw at it. But it did what the machines do and took it all without batting an eyelid (especially as they don;t have eyelids…).

If there was going to be another turn, the Tactical Edge roll and the first Fate roll would have been really tense affairs, as the Resistance would have tried to stop the endo from walking out and winning the game.

But it was not to be, we rolled for game end and the game finished. Now Annie, as her endoskeleton had ended in control of the objective, had the chance of rolling off against Gareth to see whether she would win, or the game would end in a draw…

I’ll let you guess how the roll-off went: 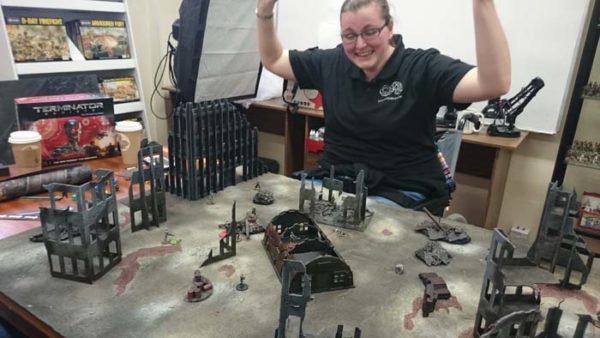 Machines victory, good fun game and Gareth does not have to sleep on the sofa – everybody wins! 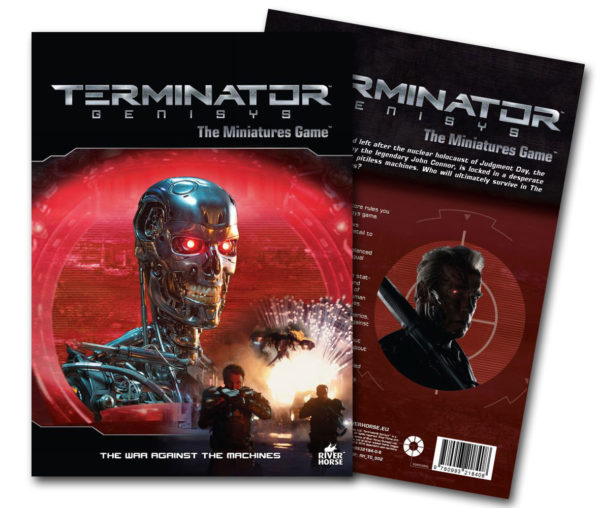