The empire of Macedonia arrives in SPQR. Spearheaded by warbands of disciplined men that used innovative tactics, they are a force to be reckoned with.

The Kingdom of Macedonia created an empire that spanned much of the known world, its armies defeated those of every nation it met. Building upon the civilization of the Greek city-states, this empire spread Western culture, philosophies and science a vast distance, forming the roots of our society today. When people speak of a Greek empire, it is the Macedonians they are talking about.

To lead your force, you’ll need a suitably capable hero. As well as a generic hero on foot that you can develop in a campaign however you like, this set includes three renowned heroes of legend. These heroes are a costly investment but are extremely potent forces on the tabletop. They can be called upon in the same way as mercenaries in campaigns. Alternatively, they are ideally suited for larger standalone games.

Hephaestion: One of Alexander’s closest friends and allies, Hephaestion fought the Thracians during Alexander’s regency of Macedonia and remained close to him thereafter. An exceptionally skilled and inventive man, Hephaestion rose through the ranks not because of his closeness to Alexander but by his own merit. He was often given diﬃcult tasks, both on the battleﬁeld and oﬀ, and was rarely found short.

Phillip II: King of Macedonia, it was Philip II who was chieﬂy responsible for conquering and binding together the classical Greek city-states, galvanising an empire that would lead to the truly legendary Alexander, his son. His plans to invade the Persian empire would be cut short by his assassination, but Alexander would go on to continue the legacy of Philip II.

The Young Alexander: Even at an early age, Alexander showed great promise. After being tutored by Aristotle, Alexander was made regent of Macedonia when sixteen, during which he drove oﬀ a Thracian revolt and colonised their land. At eighteen, he was leading part of his father’s army and responsible for breaking the Theban line, the turning point at the Battle of Chaeronea. These, it turned out, would become the least of his accomplishments. 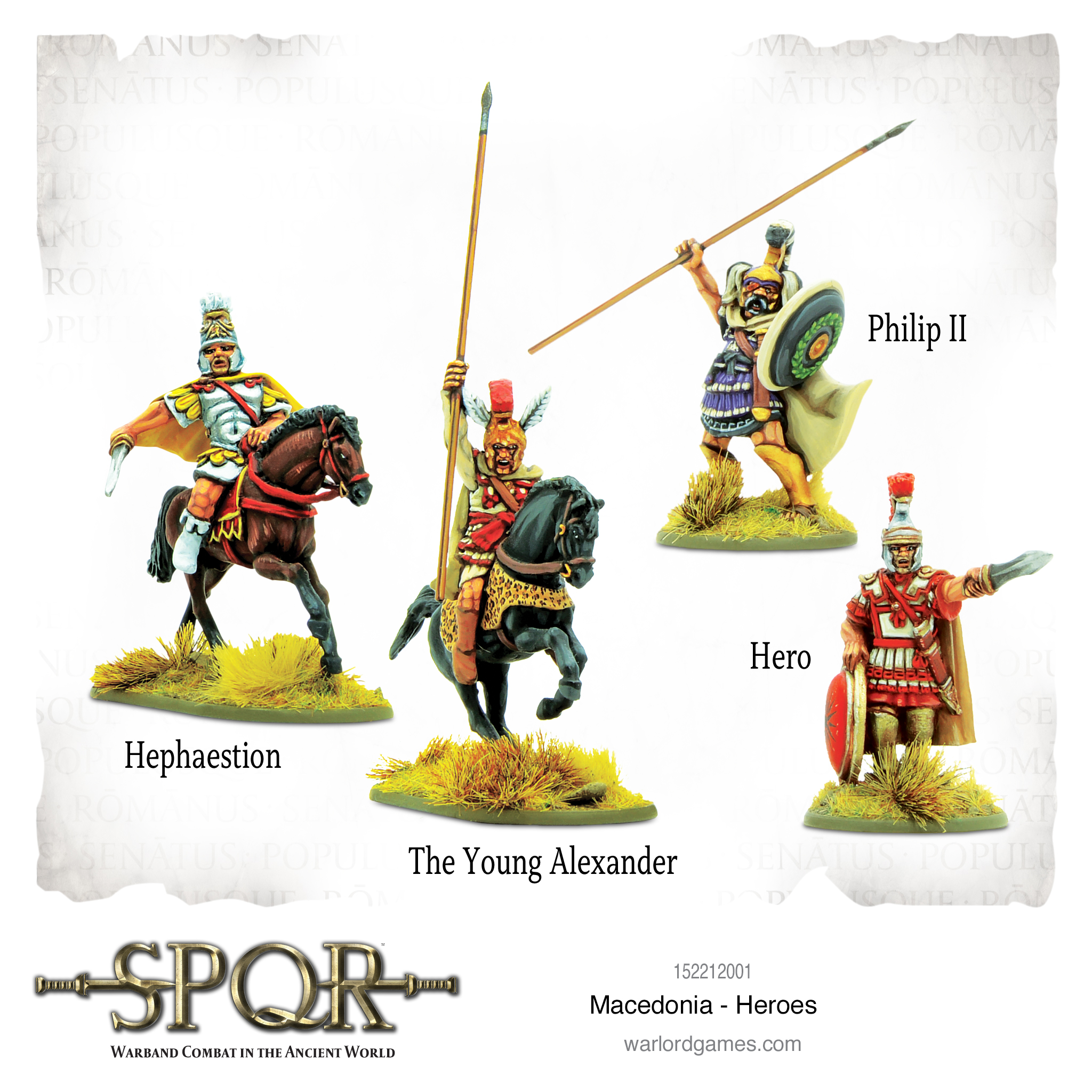 The Royal Guard (also known as Hypaspists) were light infantry but very much the elite of foot troops in Warbands of Macedonia. Skilled at irregular warfare, they could not only ﬁght in a phalanx but also hit the enemy on ﬂanks and where they were not expected – and they hit hard. Recruited from well-bred Macedonian families, the Royal Guard were the terror of the battleﬁeld. 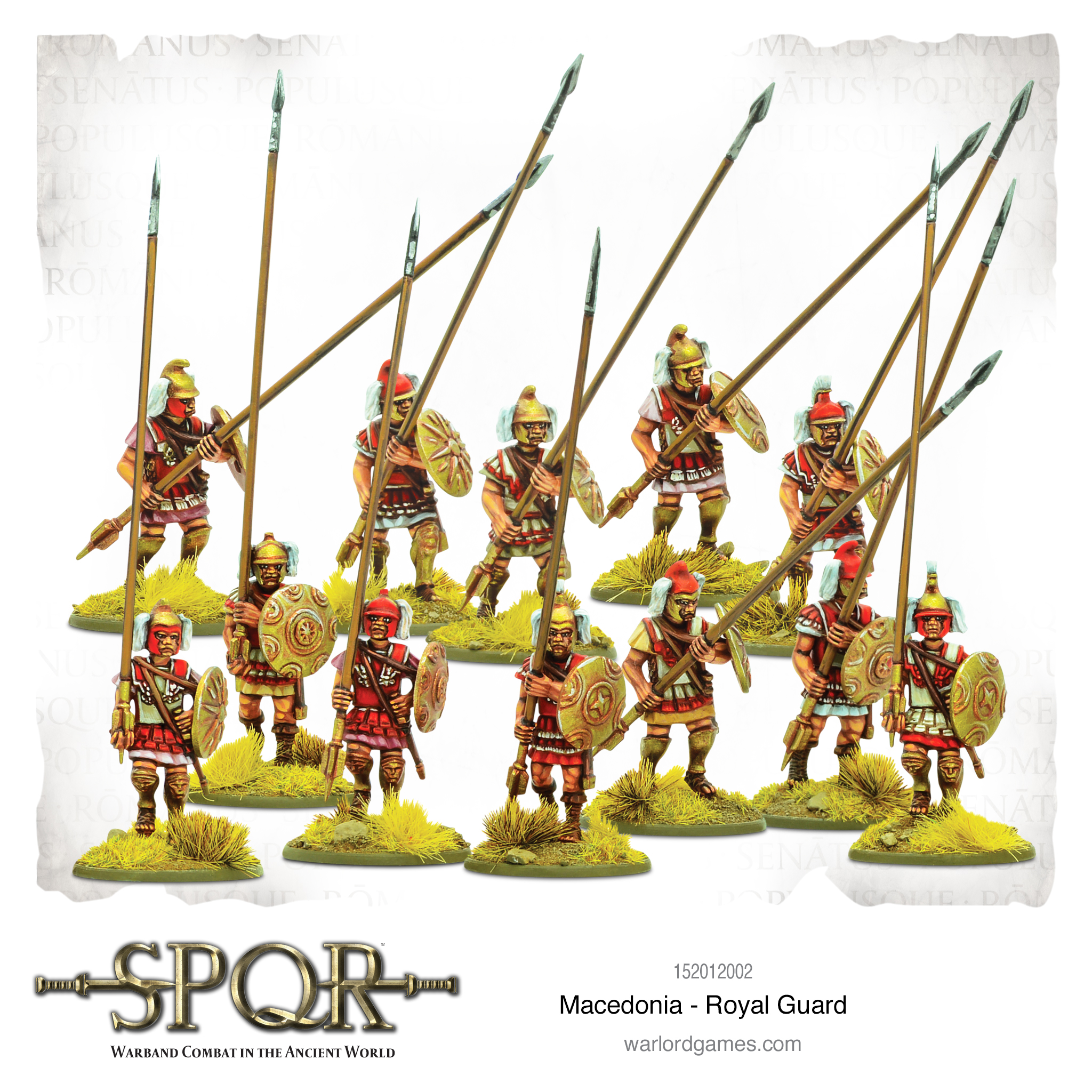 Enhance the effectiveness of your Royal Guard with command elements. The musician can inspire the unit to greater feats once per game and a standard provides a reliable anchor point for will-to-fight checks. The hero is an ideal leader for a Warband. 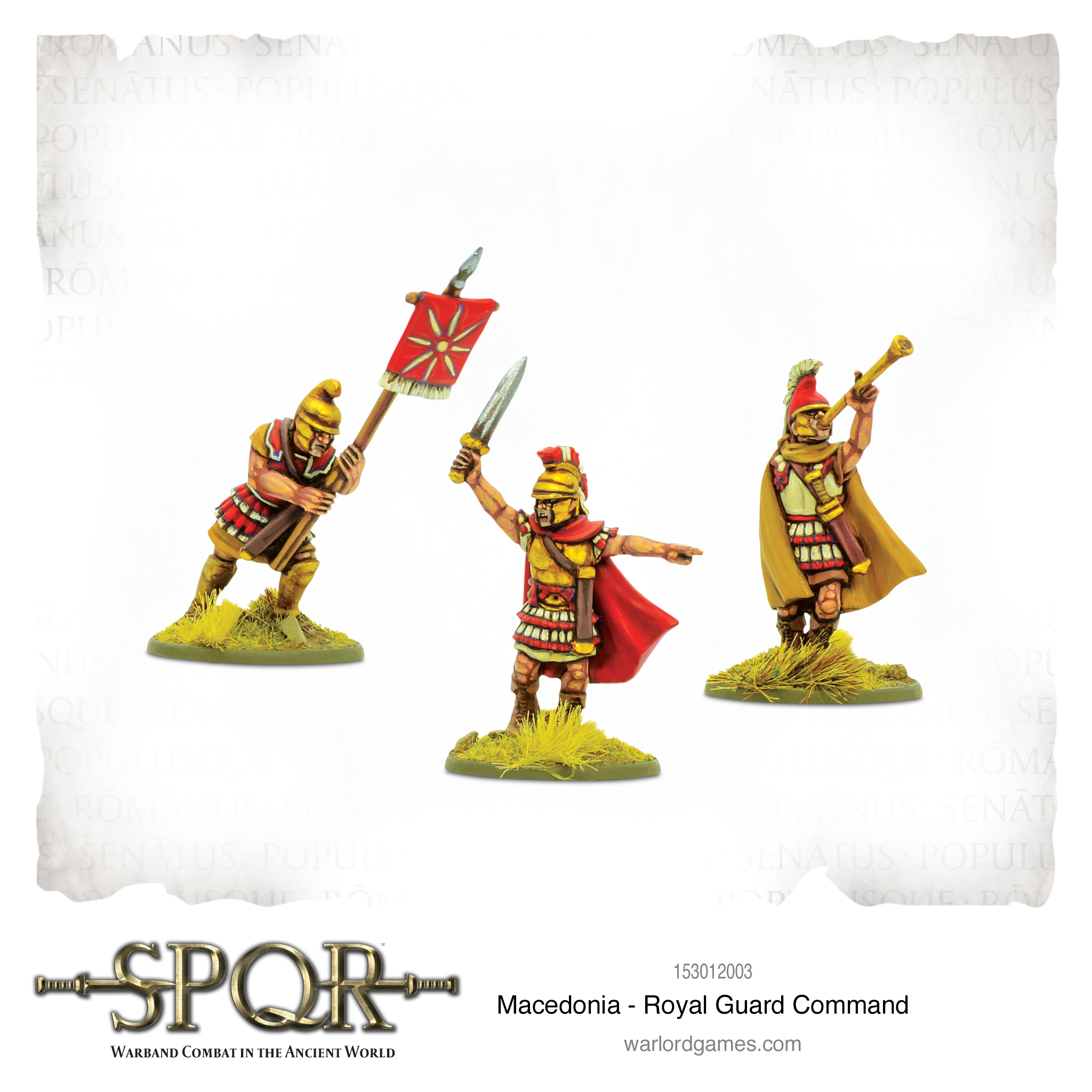 The Pezhetairoi (Foot Companions) built upon the success of the Greek phalanx – and improved it. Deeper formations were used, along with the sarissa, a pike much longer than the spears used by the city-states. Whereas the phalanx was the mainstay of Greek armies, under Alexander they were used to pin enemy units and hold them until they could be smashed by the Companion Cavalry. 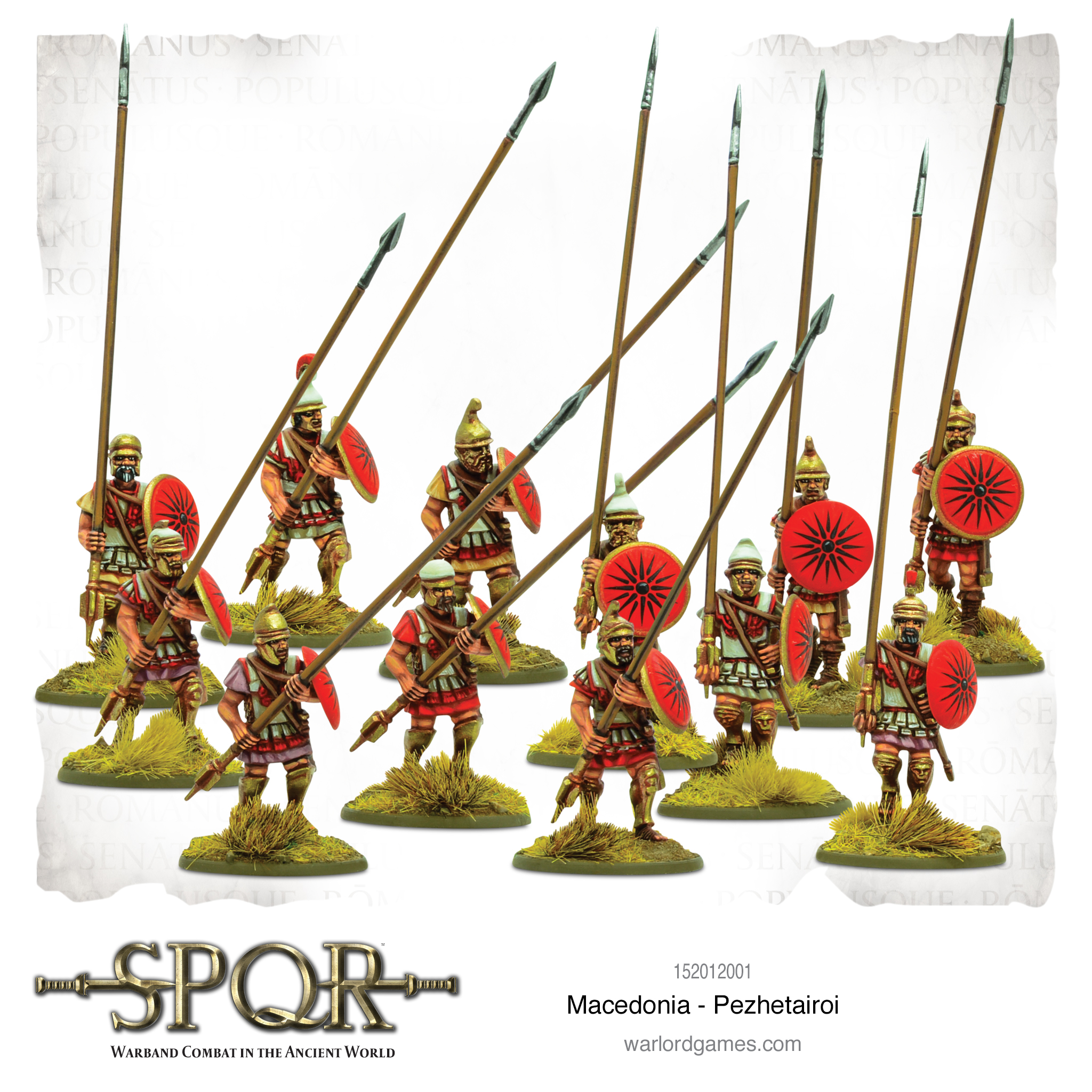 The command elements of a Pezhetairoi unit can greatly improve their fortunes in battle. This boxed set includes a hero, musician and standard-bearer. 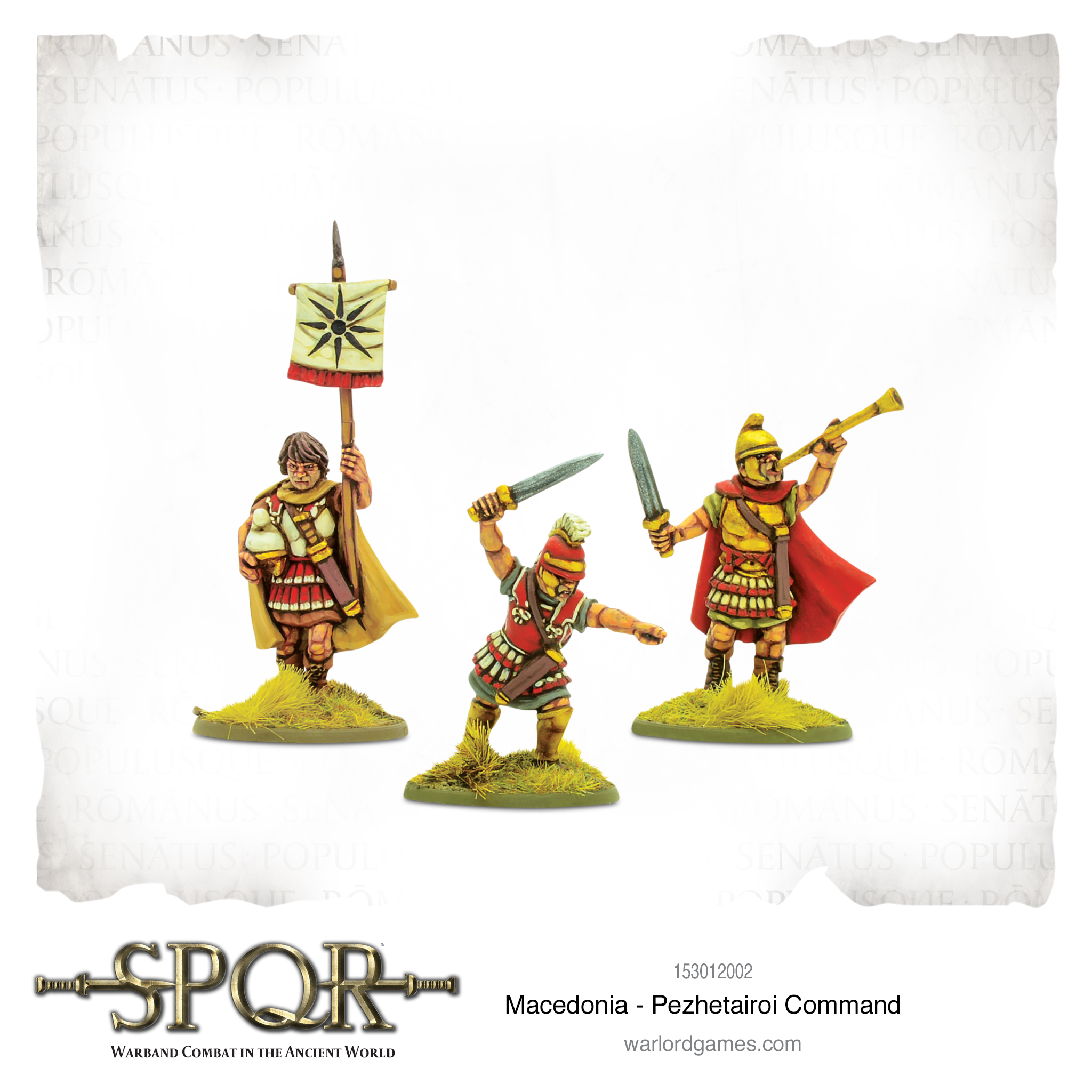 The Companion Cavalry were regarded in Alexander’s time as the best heavy horse units in the ancient world. They pioneered many new tactics including the famous wedge. A unit of Hetairoi bearing down on weak infantry could smash the enemy apart in one charge, piercing their ranks and throwing them into disorder. This box includes a musician and standard-bearer. 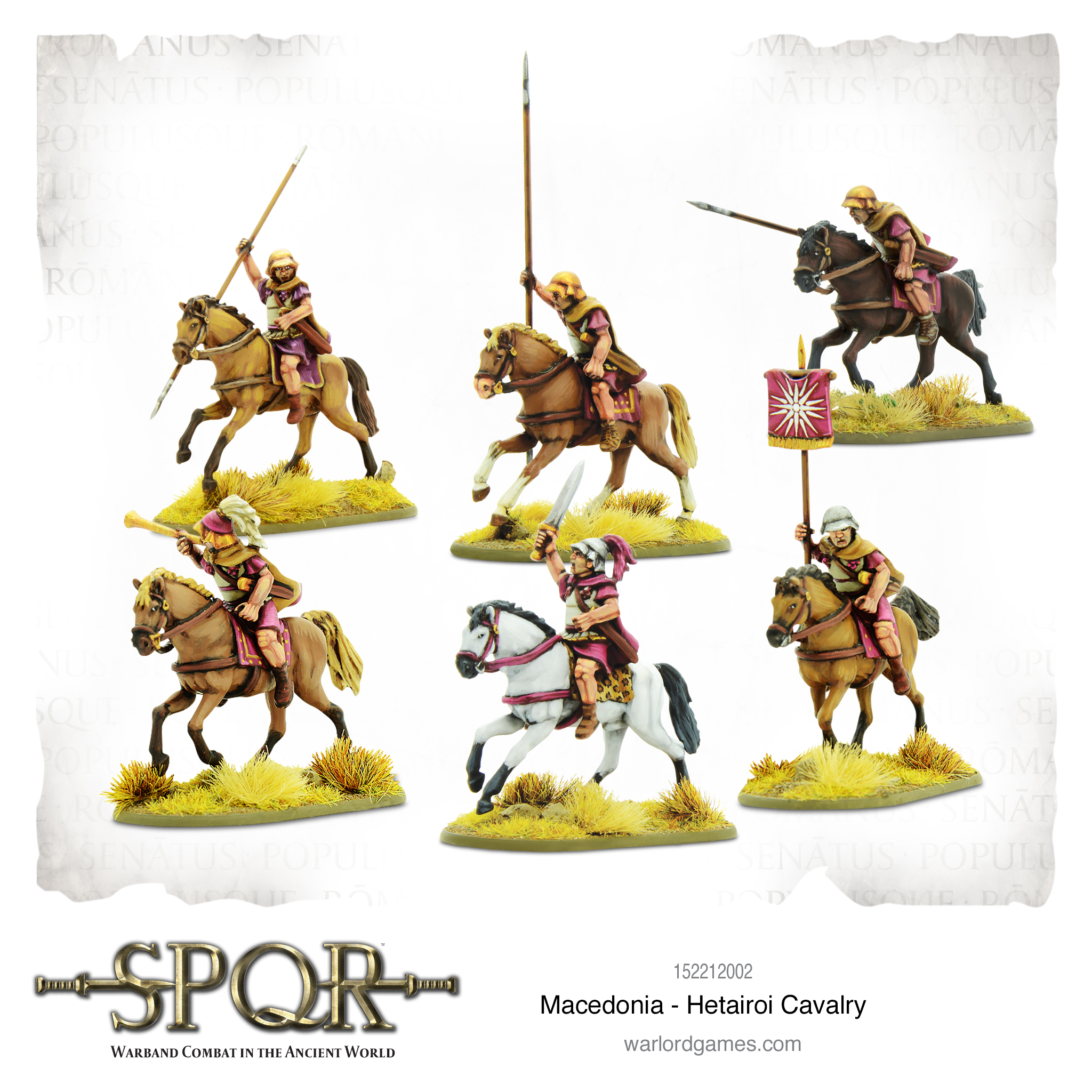 You can upgrade Macedonian Hetairoi into heavily armoured cavalry, known as cataphracts. A cataphract is a heavily armoured warrior that will prove very difficult to unsaddle. Though more cumbersome than some cavalry, due to their barded steeds and cuirasses, a cataphract charge is devastating. 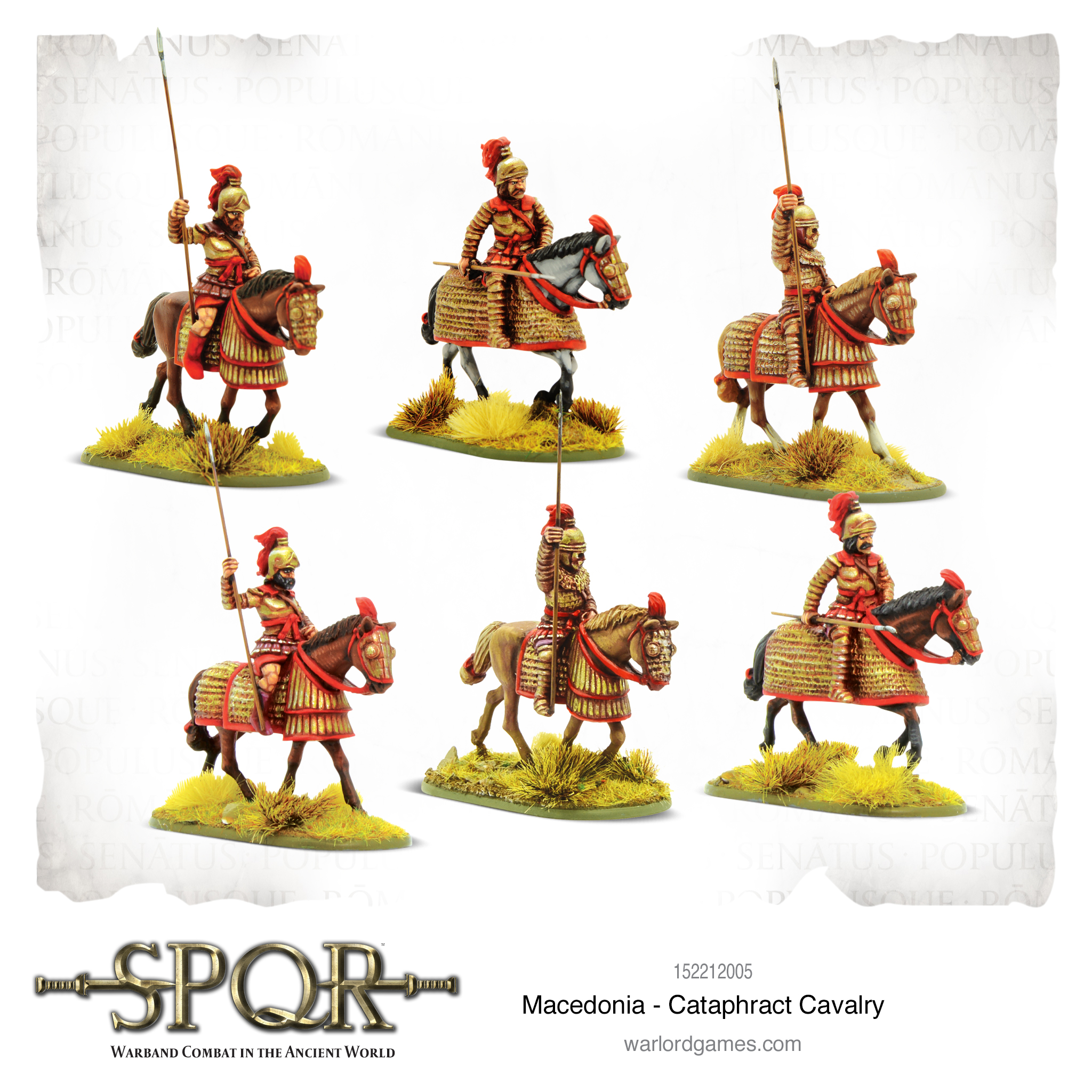 If you have a cavalry-centric force, you’ll need a mighty mounted hero to lead it! This boxed set also contains a standard and musician. 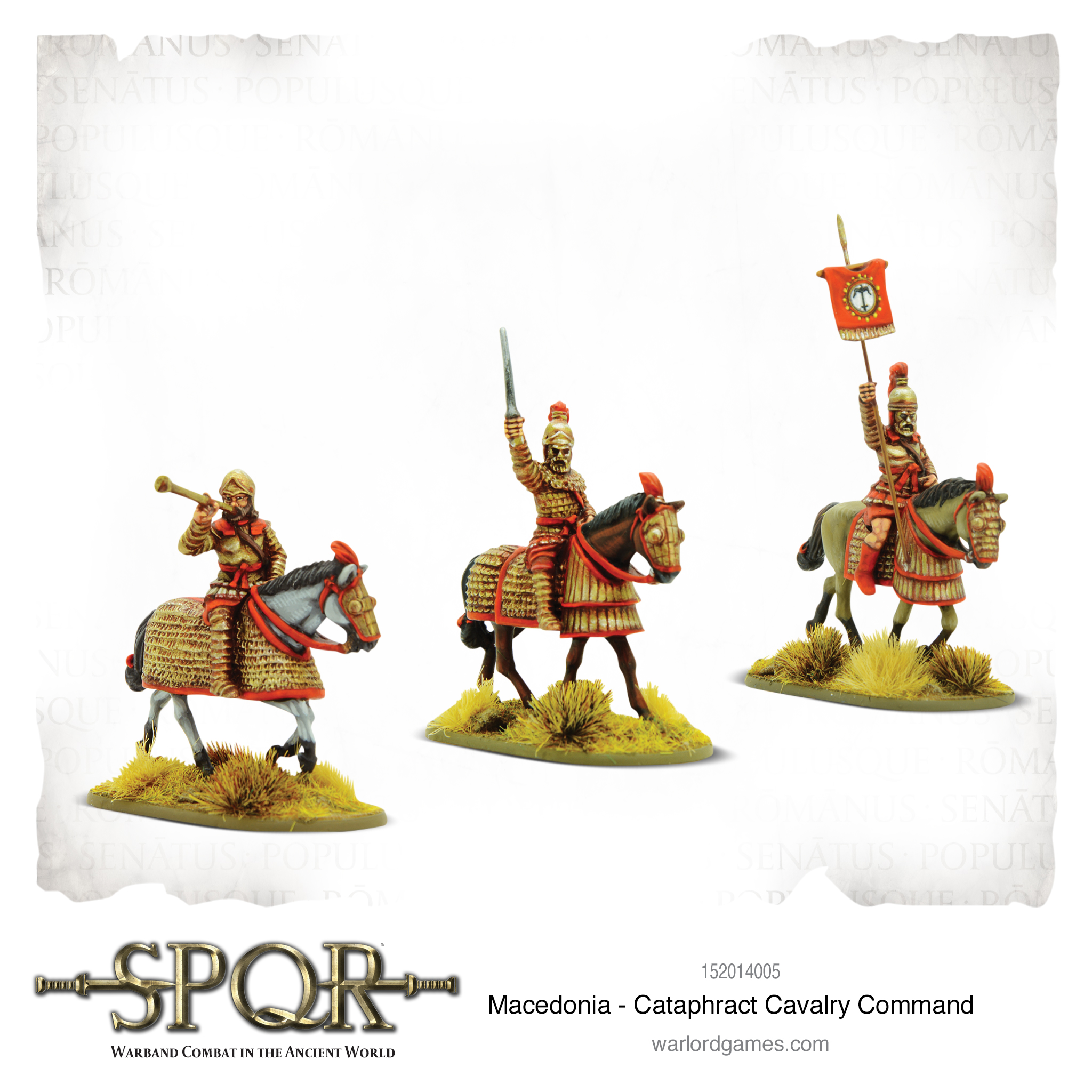 The Thureophoroi were a variation on the common Peltast, though equipped with heavier weaponry. They filled the gap between the light Peltast and the might of a phalanx. Box includes musician and standard-bearer. 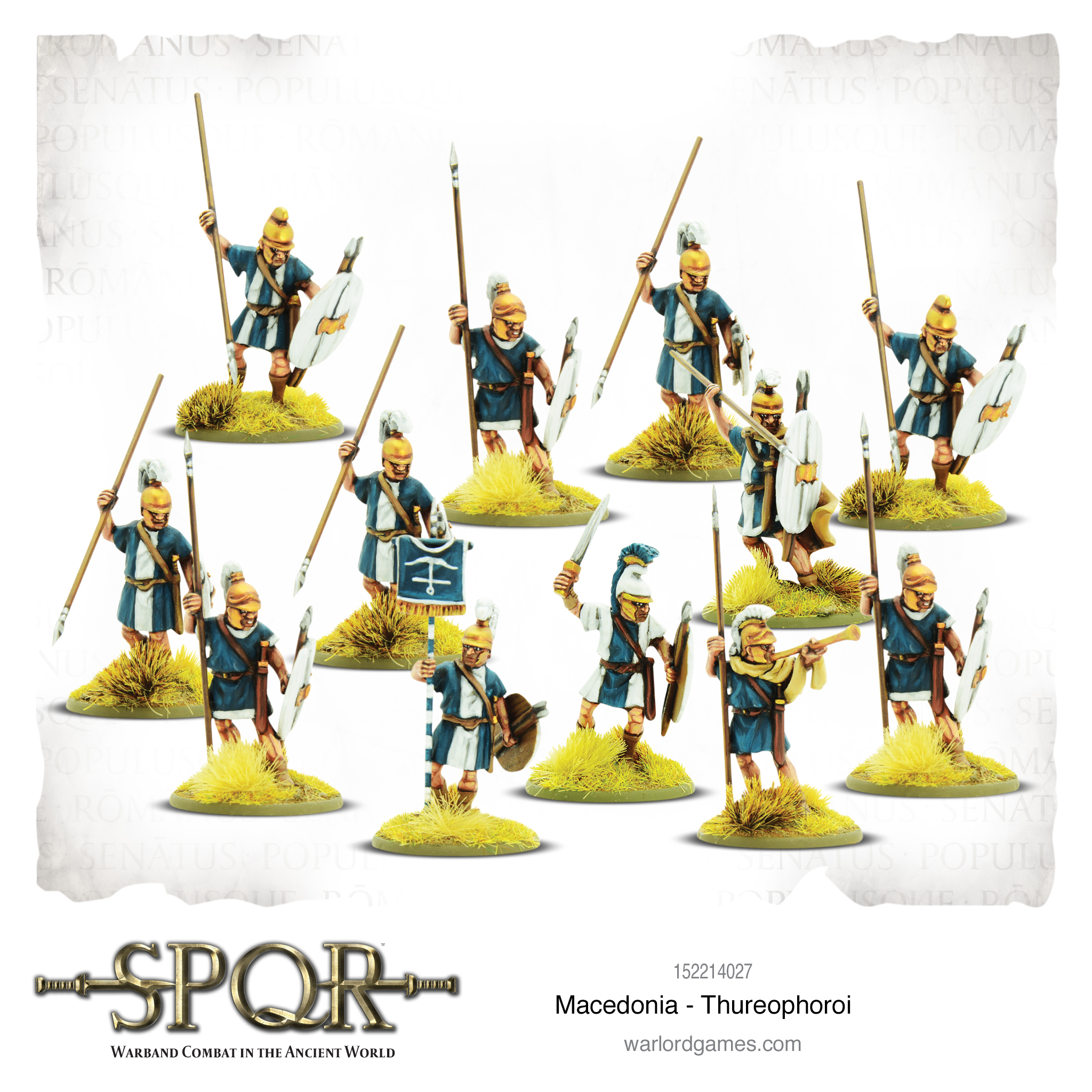 A variation of the Thureophoroi also developed, known as the Thorakitai – equipped similarly but wearing strong armour. They can also form a makeshift phalanx. Box includes musician and standard-bearer. 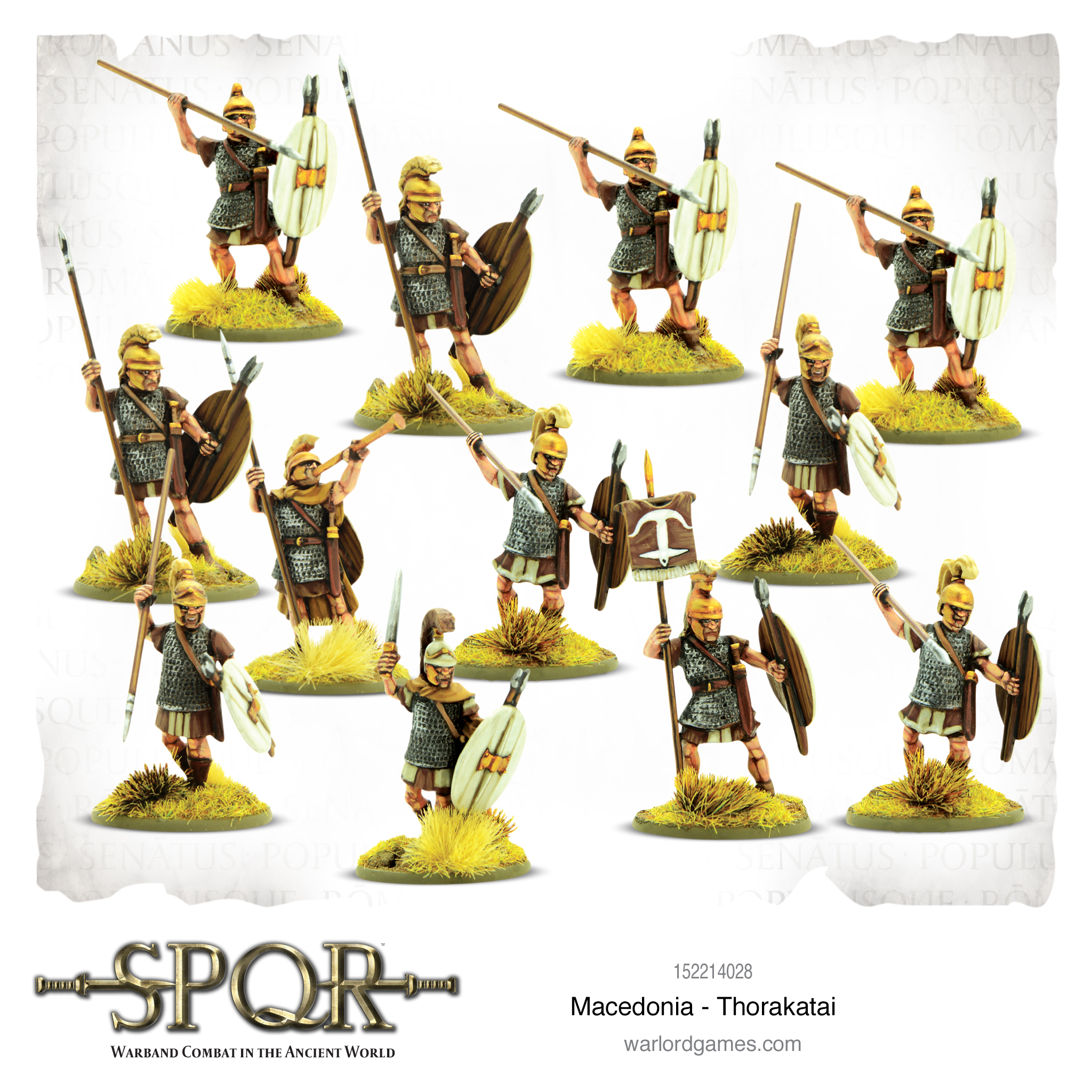 Alexander was the first European to face war elephants in battle and, after defeating the Persians at the Battle of Gaugamela, became impressed enough by their potential that he incorporated them into his army. A War Elephant makes for a daunting presence on the battlefield, inspiring terror when it charges. If equipped with a turret, a handful of warriors can endlessly rain down javelins and arrows upon their foes. 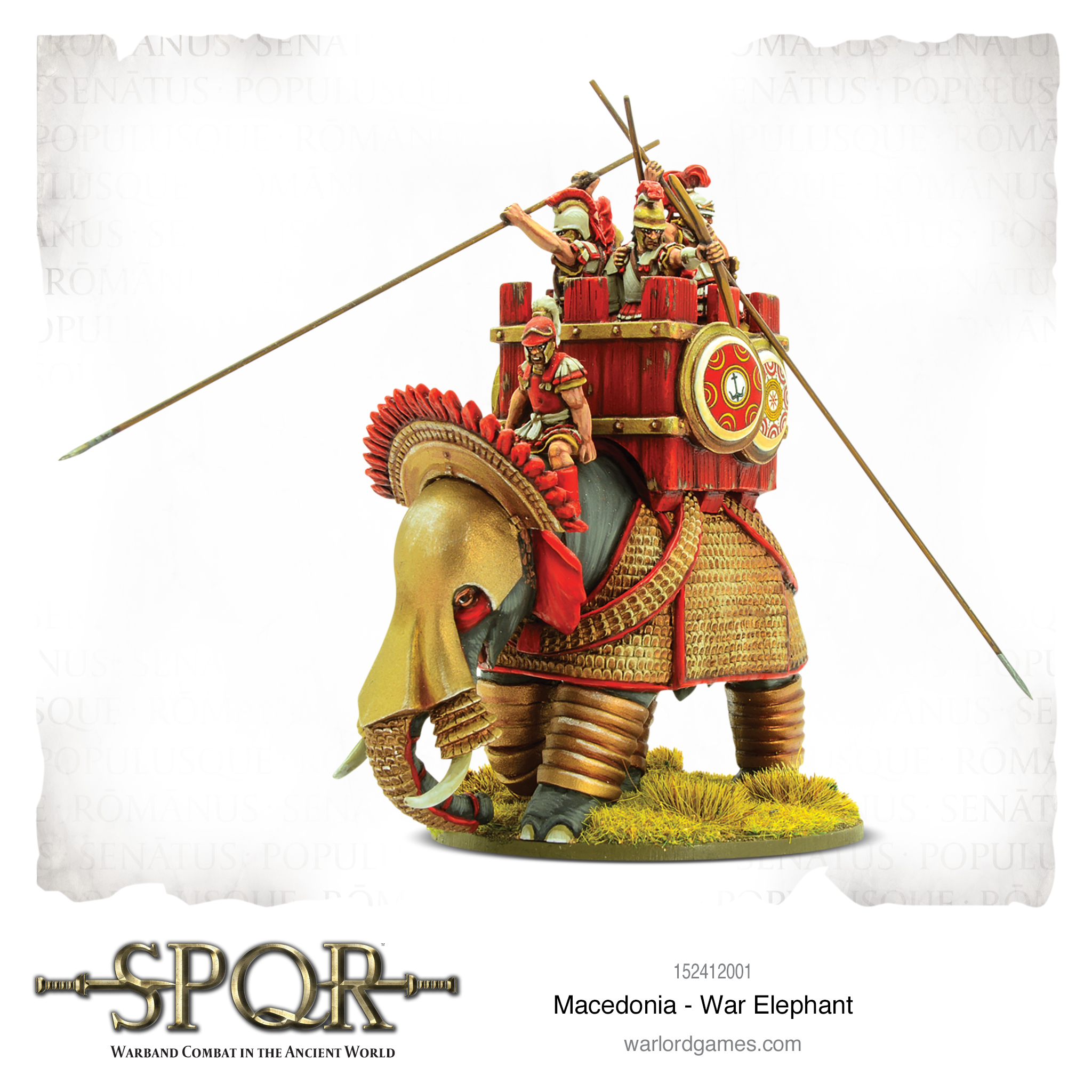 Contains 1 resin elephant with crew made in the new Warlord Resin, supplied unassembled and unpainted.

Warlorder Dan has constructed this 1000 Denarii mounted Macedonian force. This army is extremely capable in close quarters; should any mounted unit inflict heavier casualties during a turn in which they charged than their opponent, they will receive a free move or melee action that does not count as a retreat.

Dan likes to charge right in with his Cataphracts. These are an especially hardy unit able to tie up enemy formations. This has the dual purpose of hitting extremely hard and drawing early game missile fire away from the War Elephant; long enough for it to run amok through the enemy ranks. Additionally, every model is capable of hurling lethal javelins.

Dan can often be found contemplating the mound of unpainted minis building up under his desk. He has a tendency to roll lots of ones. He also has a tendency to complain about rolling lots of ones.
View Profile | View all posts by Dan Hewitson
Konflikt ’47: German DNA-Enhanced Infantry
Bolt Action: Tactics of the Korean People’s Army 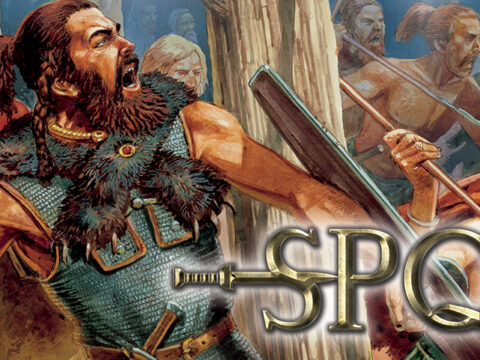 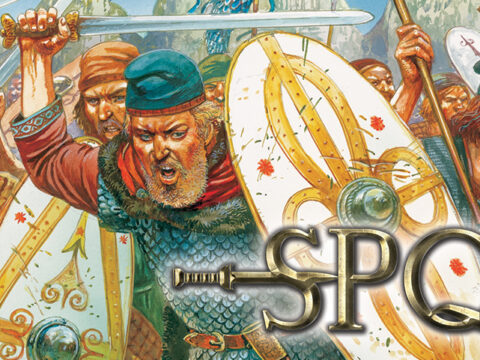