We’re heading into the forests of Germania to see what makes the tribesmen tick, and to find out how to employ them as a Warband in SPQR.

Within the forests of Germania, ﬁerce tribes lived, comprising men and women who would never be broken by invaders. Throughout the life of the Roman Republic and on into Empire, Germania was never fully tamed and its warriors soon became greatly respected by the legions. The lands to the east of the Rhine were lethal for any legionary daring to venture into this dark wilderness.

The name Germania was mostly used to describe the region east of the Rhine and north of the Danube rivers. In Rome, it was called Magna Germania (Greater Germania), while the tribes who dwelt there often referred to it as Germania Libera (Free Germania). While the territory west of the Rhine was technically Germania (or Lesser Germania, at least) as well, it was more populated by Gauls and fell under Roman rule.

Julius Caesar himself said that while there were similarities between the Gauls and the Germanic tribesmen, the Gauls could be civilised given the appropriate attention. No such words were used to describe the Germans, who were thought to be savage in the extreme and the greatest threat posed to Roman-dominated Gaul. It is said that Pytheas of Massalia’s account of his exploration, in which it is possible he ﬁrst encountered Germanians, was later rejected by writers who refused to believe his stories. Roman legionaries came to fear the Germanic tribes and rued any orders to invade their territory and bring them to heel. The Roman leader Tacitus did, however, make many derisive comparisons between the sturdy Germanic warriors and what he considered to be the indulgent, eﬀeminate Romans.

Within the tribes, free Germanic warriors voted for the kings that led them, rather than tolerate a hereditary monarchy of any sort. Ruling by the consensus of the free men below him, a tribal king was more likely to inspire bravery in battle than a tyrant, which accounted for at least part of the Germanic tribes’ success in war. 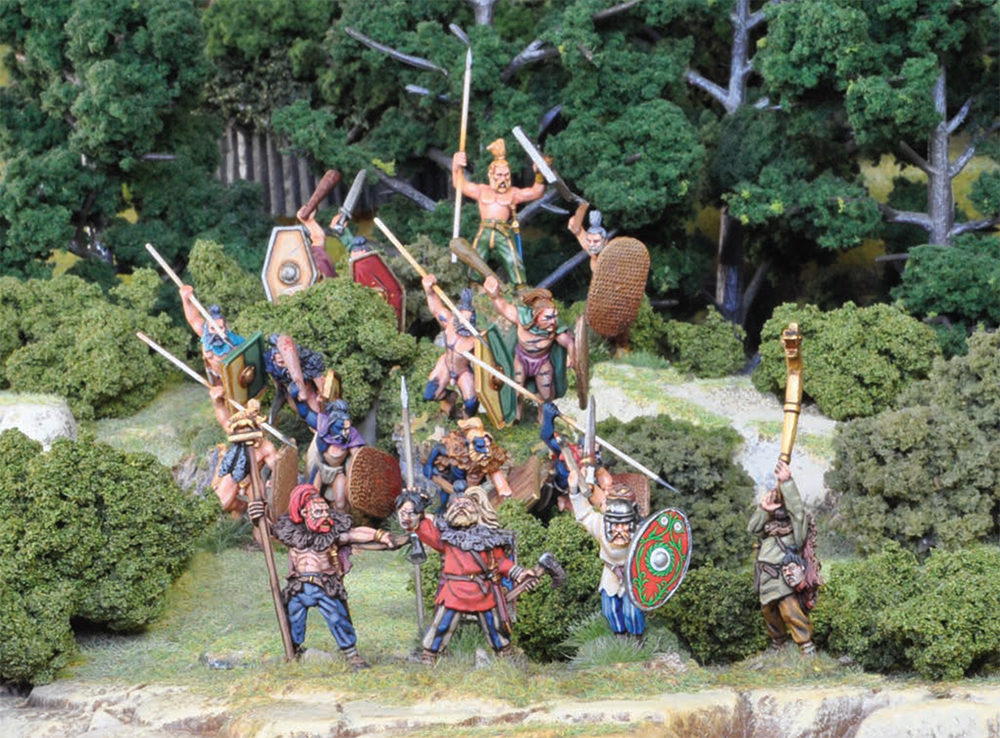 Germanic law was based around the concept of weregild, the worth each man was valued at. If one warrior murdered another, he would be expected to pay the weregild cost of the man he killed, usually to the man’s family or clan or, failing that, the tribe’s king (the Britons had a similar idea with sarhaed). A slave’s weregild was extremely cheap, whereas a good craftsman or noted warrior would have weregild that could hurt even the richest purse. The weregild of a beloved king would be all but unpayable.

If anyone denied a claim made against them, they were required to either take an oath of innocence or, less mercifully, were made to walk through ﬁre. It was believed that if that person were innocent, the wounds they received would heal very quickly. Punishments beyond this were rare, but the threat of exile from a tribe and its land was always present, and one that would be greatly feared.

It is apparent from both accounts of the time and archaeological ﬁnds that the warriors of Germanic tribes were not as well equipped as those from Gaul, chieﬂy because iron was not common in the lands the tribes held. Spears were the predominant weapon, needing less iron than swords, and metal armour beyond the traded or stolen helmets would have been present on only the wealthiest warriors and nobility. These would be animal-shaped, sometimes also featuring plumes.

The famous sax, a long-bladed, single-edged dagger from which the Saxons would later derive their name, started becoming popular among the tribes in the second century BC, though it was supplemented with arms obtained (by whatever means) from both Rome and Gaul.

Shields were large enough to cover much of the body and tended to be oval, rectangular or multisided (though elongated) in design, with horsemen using smaller round or oval shields. Contemporary sources described Germanic shields as having been marked out in very bright colours, though regrettably there are no direct sources for what shapes, patterns or designs might have appeared on them. However, there tended to be a large variation in weapon and armour choice between the many different tribes, and it is, therefore, difficult to formulate an idea of their appearance as a whole, something wargamers can take advantage of – as in many cases in this period of history, there is sometimes no right or wrong answer!

The strength of a Germanic Warband lies in its infantry, with most being able to deploy a veritable horde of ferocious warriors. What they lacked in sophisticated tactics or quality of equipment was more than made up for by courage and a desire to take the ﬁght to the enemy, sweeping them aside in wild, terrifying charges. These feverish attacks meant they were particularly proﬁcient in close combat; a force to be reckoned with on a one-on-one level.

A Warband of Germanic tribesmen will usually be a large force able to crush its enemies by weight of numbers, or the sheer tenacity of its warriors. It may not be accurate to say that they were completely devoid of strategy, however; they were known to use certain simplistic battle formations such as the boar’s head. 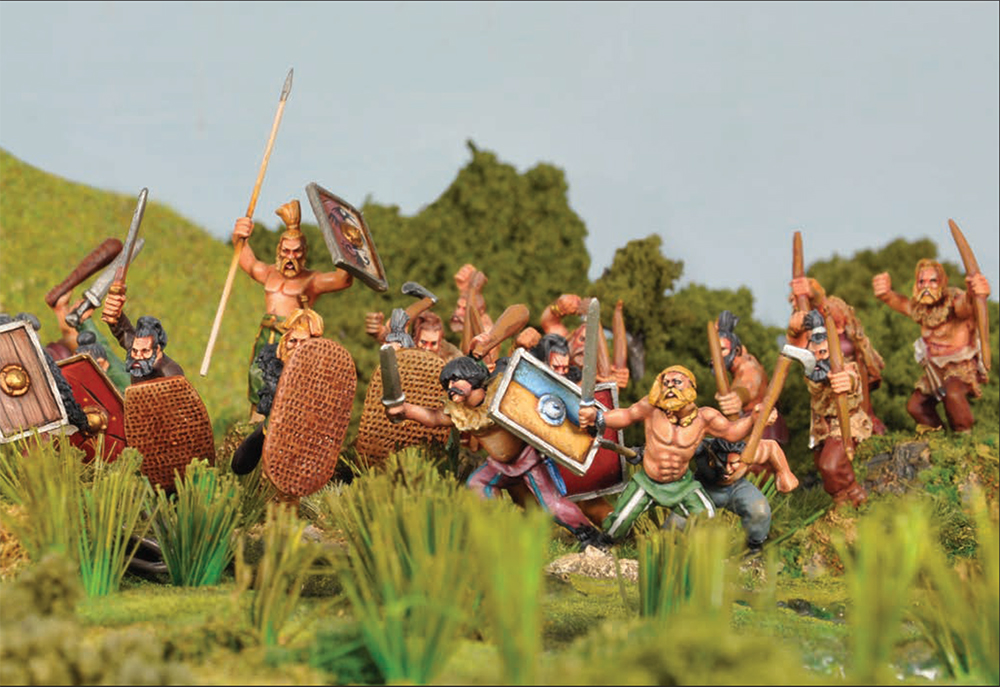 Your hero represents a chieftain or warlord who has won renown in part due to his skill with a blade. As such, a Germanic hero is best at the thickest of the fighting. At only 45 Denarii, the hero is a steal, equip him with a sword and shield, and perhaps some light armour (you don’t want to overburden your denarii on a single model) and he’ll be more than ready to lead the charge. In a campaign, you might consider developing a Germanic hero along the Leader of Men Talent Tree, and place him at the head of a hefty column of warriors. This should enable them to more reliably stay in the fight.

Warriors These should certainly be the core of your force and in great numbers. Germania suffers from a lack of available equipment in comparison to some other Warbands, but should, in most cases compensate with enough bodies to overwhelm any opposing force. You can even elect to take a purely Skyclad force; not only does this keep more Denarii per warrior in your coffers, but they also receive hefty combat bonuses. Also consider adding German Wives to your unit. At only 2 Denarii each they are a terrific bargain:

German Wives It was not uncommon for the wives of warriors to be close by in battle, shouting encouragement at their men when the ﬁght was going well and hurling insults when it was not (doubts about their husbands’ manhood or threats denying the marital bed would be popular). This had the eﬀect of causing the warriors to ﬁght ever harder. German Wives add to the number of models in the unit, but only grant bonuses in respect to Melee Dice and Bravery. They are always the ﬁrst to be removed as casualties (likely running away when the enemy get too close rather than actually being cut down).

Tribesmen Less common will be Tribesmen. These are purely a supporting unit. Take advantage of their hit & run special rule to keep the lightly armoured Tribesmen out of harm’s way. An enemy Warband cannot afford to ignore bow-armed tribesmen for two long, as a diminished unit is always more susceptible to small arms fire as the opportunity to parry dwindles.

Horsemen Perhaps less adept than horsemen of other Warbands, Germanic Warbands still have a use for cavalry. Whilst your warriors lead the head-on charge, the horsemen can harry the flanks, or act as a reactionary unit, joining battle where they are most needed later in a game.

Don’t forget you can add great Heroes of Legend such as Arminius and Ariovistus Though a costly investment, their powerful abilities will be invaluable to victory, particularly in games of 1000 Denarii and above. 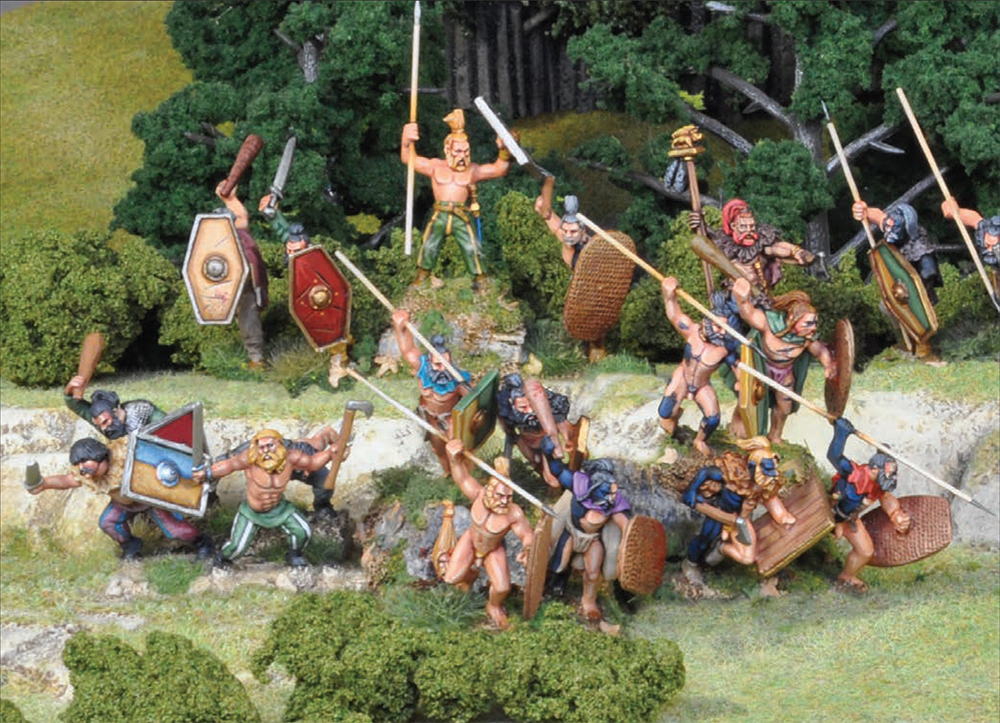 Time to choose your men 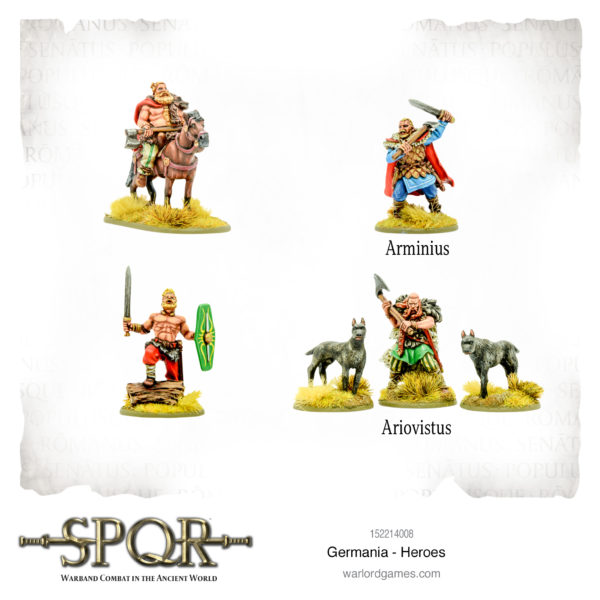 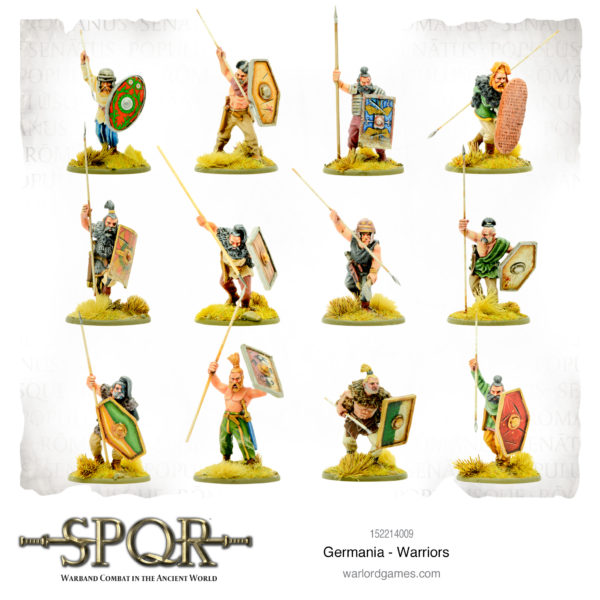 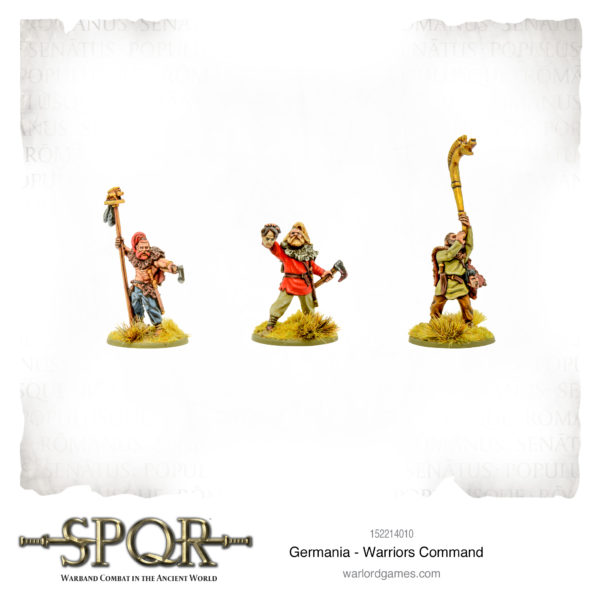 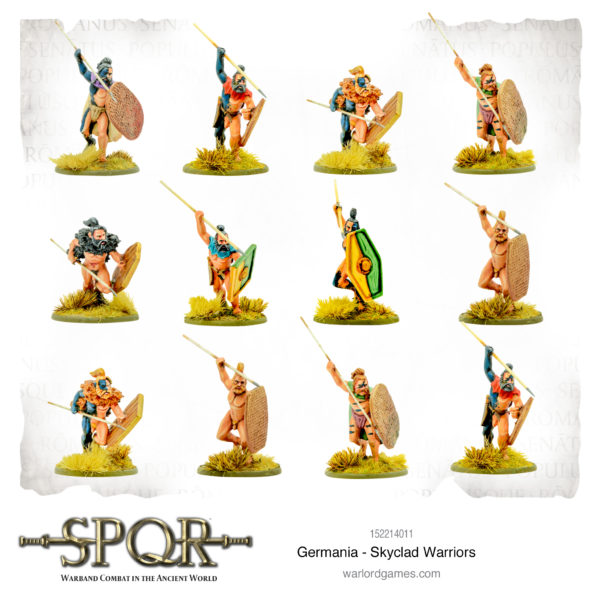 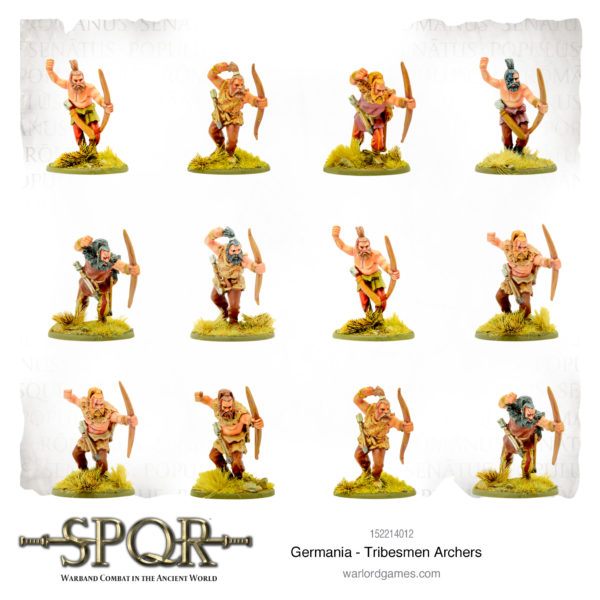 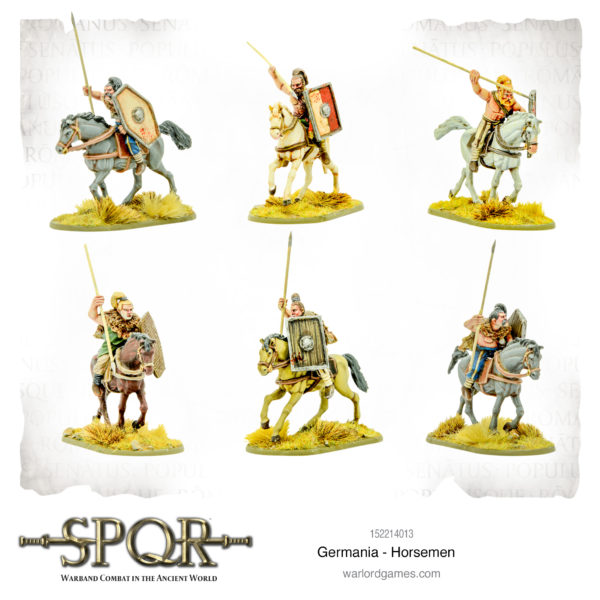 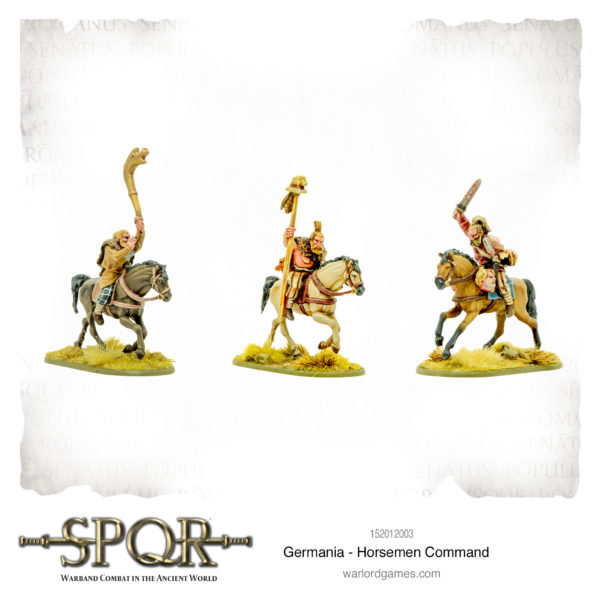 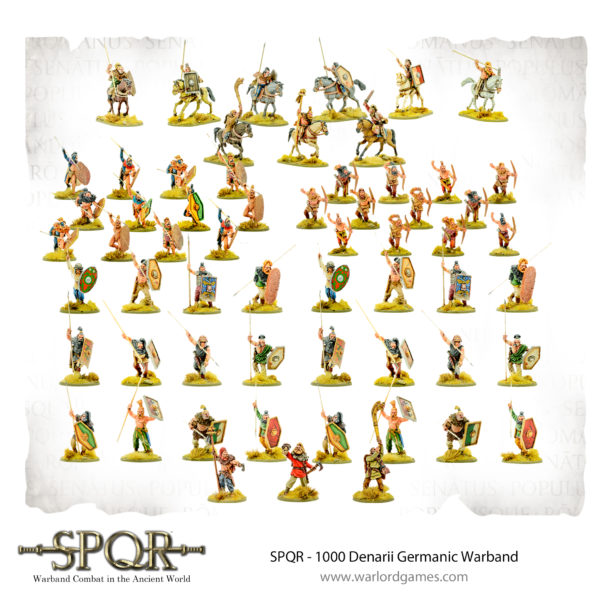 WARBAND COMBAT IN THE ANCIENT WORLD