We recently showed off the 3-ups of our forthcoming plastic Anglo-Zulu Wars British infantry. Now it’s the turn of their adversaries – the Zulus!

Below you’ll find a couple of photos of the 3-ups for the Zulu boxed sets. As you’ve come to expect from Warlord plastic sets there will be a stack of options for building these proud African warriors – just a few of which are shown here… 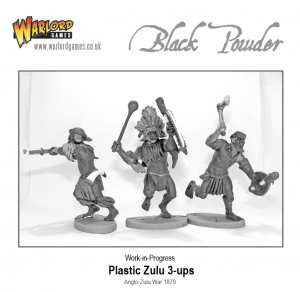 These sets are being produced in conjunction withZulu War experts Empress Miniatures so you know they’ll be as historicaly accurate as possible as well as having that dash of Warlord thrown in for good measure!

Yes, there will be more firearms, more heads with less extravagent hair styles/headresses and, of course,  more bodies with chainmail loincloths* 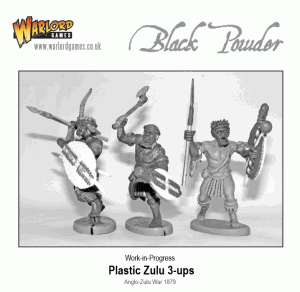 There will be two Zulu boxed sets – unmarried and married. The married ones will undoubtedly look miserable and henpecked!

New plastic British Redcoats and two new plastic Zulu sets – could we be any better to you?

The answer is, of course, YES! So, we’ll also be doing a Natal Native Contingent set in plastic too!

* Okay, admit it – which of you were already heading to make an outraged post on TMP before you realised we were pulling your leg?