The illustrious Steve Morgan author of Pike & Shotte has been sharpening his pikes once again to take us through his English Civil War Edgehill Project: 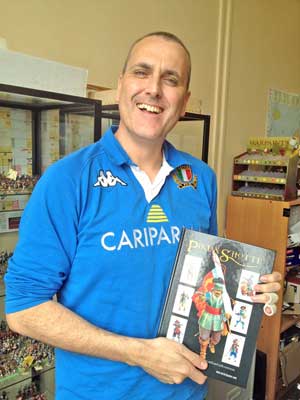 Before starting an English Civil War army it’s important to decide what force you want to head and why. Many of my gaming friends base their ECW armies on geography, making sure to feature regiments raised in their home counties. Originally from the Welsh March this meant there was an abundance of Royalist forces on the block, so I decided to buck the trend and go for an early war Parliament army led by the Earl of Essex. Once this decision was made I wanted to give my force some structure based on historical grounds, and so Essex’s army that took to the field at Edgehill in 1642 seemed a good (if somewhat optimistic) project.

Not only would this army be sensible in gaming terms (lots of Royalist armies being assembled to play against) but some basic reading up of the infantry regiments present showed that I would not get bored putting the army together as the coat colours were many and varied. This meant once I had assembled the army, with a simple swapping out of flags, I would have a force that could be used for easily other ECW/TYW forces too. 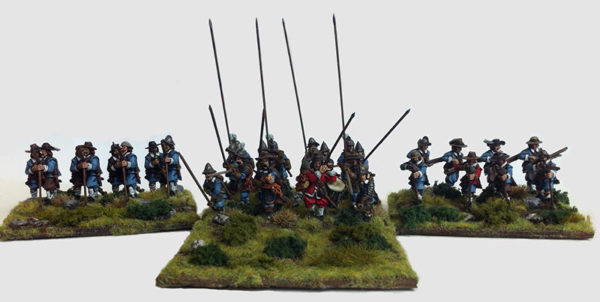 The early war Parliamentarian army list in the Pike & Shotte book gave me the basic structure for the force on the table. Each foot regiment would consist of a standard size pike block and two standard size musket wings and history had already provided the breakdown of the Battalias (and their commanders).

Another plus point for this army was the diversity in the Horse units available, as it consisted of Harquebusiers (standard cavalry), Cuirassiers and Dragoons. Cuirassier units were rare in the Civil Wars and Essex’s army had three troops of these heavily armoured men. Uniforms for cavalry were practically unheard of, so once again the units in my army can easily be used to represent Royalist troops and TYW cavalry with adjustments to flags and sash colours.

At Edgehill, Essex formed up his cavalry in classic fashion on the wings but held his Cuirassiers in reserve to the centre of the army. 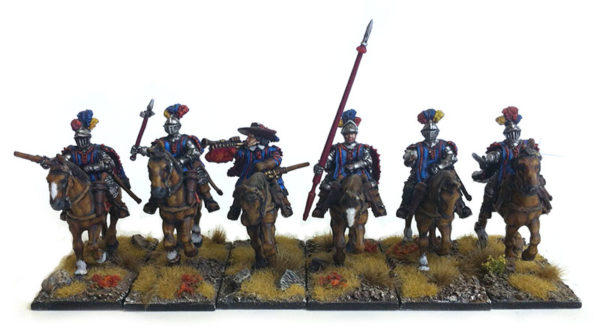 Right Wing of Horse (The Earl of Bedford – Command Rating 7)

The details of Ramsey’s command are very vague; I represent this formation with 6 standard size cavalry units supported by the Commanded Musketeers mentioned in the Infantry section.

There was also a troop of Harquebusiers led by Captain Draper in the centre, but I represent this formation with two units of Cuirassiers (one being Essex’s Lifeguard). 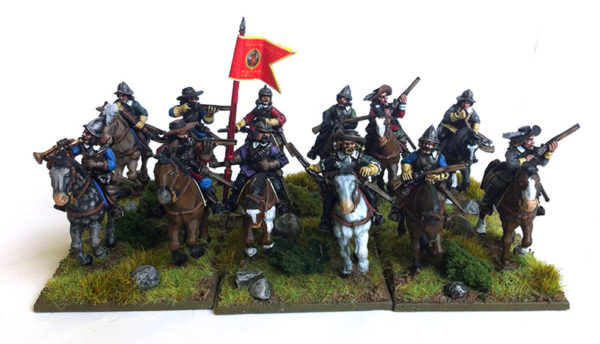 Parliament could call upon a reasonable supply of guns despite the Office of Ordnance remaining in Royalist hands at the time of Edgehill. The army marched with 29 guns in total, but some were too heavy (or were mortars) and therefore played no part in the battle. It is estimated that 16 cannon made it to the field in time to take part at Edgehill. 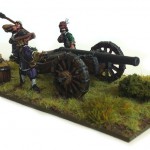 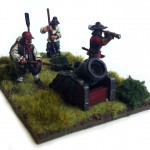 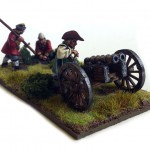 I have represented this with 4 guns; two medium and two light pieces.

In addition, a reserve force was marching to support the cause but arrived just too late to see the battle, but I wanted to include them anyway for variety (and some ‘what if’ scenarios where they did make it).

Putting the Army Together

What Pike & Shotte also allows for is flexibility in the special rules. I wanted to take advantage of this to give each regiment some more ‘flavour’ based on how they actually performed on the day of battle in 1642.

This was a freshly raised army marching to battle for the first time and nobody really knew how they would fare. As it turned out, some formations turned and fled immediately while others stood bravely when all seemed lost to save the day.

I decided to select special rules for each of the regiments to represent this, not only to add more character the army but also to enhance the Edgehill games I would play. This also encouraged me to find out a little bit more about each of the formations that marched to war, and this made the whole process of putting the force together more enjoyable.

Here are some examples:

– Raised in 1642 from London & Warwickshire.
– Engagements: 1642 Edgehill, Brentford, Dunsmore Heath, Southam, Coventry 1643 Hopton Heath, Lichfield
– Coat – Purple
– Colours – Purple Field with White or Yellow Star Devices
– Lord Brooke killed by a sniper at the Siege of Lichfield in 1643 and the regiment was disbanded soon after

At Edgehill Brooke’s regiment were placed in the centre of the second line. They did not panic as other regiments fled past them and were heavily engaged as the battle reached its conclusion. 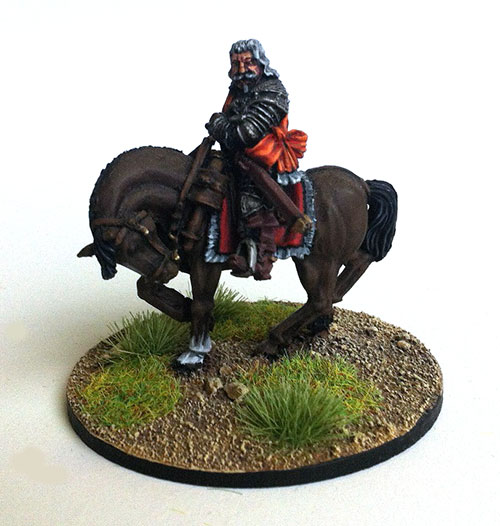 – Raised in in 1642 for service in Ireland but drafted into the Earl of Essex’s army.
– Engagements: Edgehill 1642
– Coat: Tawny lined White
– Colours: Unknown

At Edgehill, Charles Essex’s regiment was held the left infantry flank of the front line. As the cavalry clashed the unit immediately to their flank, the regiment broke and fled. They managed to rally briefly at the rear of the army but were broken and scattered by Royalist cavalry. Colonel Essex was killed in the engagement and the regiment was disbanded with many survivors joining Sir Henry Bulstrode’s regiment late in 1642.

At Edgehill Holles’ regiment was on the left infantry flank in the second line. When the Parliamentarian front line on the left wing collapsed Holles’ men advanced into the gap effectively stopping the collapse of the entire army. Casualties were proportionately very high in this regiment due to their bravery holding a very precarious position until both sides fought themselves to a standstill.
The regiment was to take very heavy losses at the Battle of Brentford later in 1642 and was disbanded soon after.

This regiment has not had the flags attached yet, but is earmarked to represent Cholmley’s regiment

At Edgehill, Cholmley’s regiment were placed to the left of the front line. On seeing the Parliamentary cavalry on that wing flee, this regiment along with the rest of Charles Essex’s Battalia fled. They managed to regroup at the rear of the army but were scattered again by Royalist Horse coming back to the field.

The orange sash on the officers denotes support of Parliament’s cause; should I want this unit to represent a Royalist blue-coat regiment (such as Sir Thomas Lunsford’s at Edgehill, later to become Prince Rupert’s) then simply painting the sashes red would suffice (plus the addition of suitable flags).
With the orange sash in place, and the addition of the correct flags, this regiment would perfectly represent a Swedish infantry regiment

A forlon hope was not actually used by Parliament at Edgehill but is a great addition to any army. Forlorn Hopes were recruited from the bravest (or most desperate) men from each of the regiments present. They would lead the assault, and draw the sting from the opposition troops. Casualty rates were very high, but the rewards from a successful assault could be great. The addition of a Petard Crew turns a Forlon Hope into a Storming Party ready to breech any defensive works – making them particularly useful in siege games, so an ideal unit for my gaming of the Siege of Lichfield. 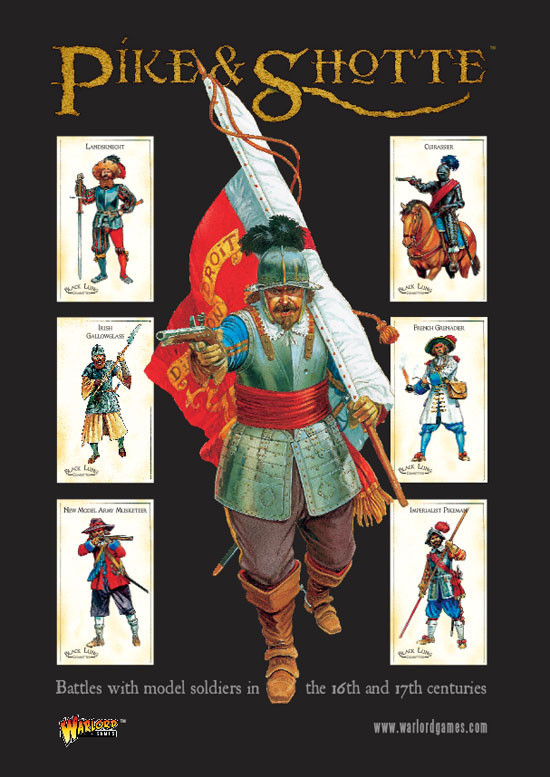