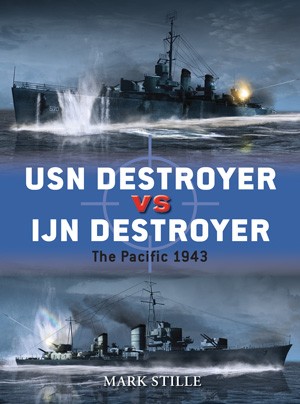 This book covers the fierce night naval battles fought between the US Navy and the Imperial Japanese Navy during late 1943 as the Allies advanced slowly up the Solomons Islands toward the major Japanese naval base at Rabaul. During this period, several vicious actions were fought featuring the most modern destroyers of both navies. Throughout most of 1942, the Imperial Navy had held a marked edge and a key ingredient of these successes was their destroyer force, which combined superior training and tactics with the most capable torpedo in the world. Even into 1943 mixed Allied light cruiser/destroyer forces were roughly handled by Japanese destroyers. After these battles, the Americans decided to stop chasing Japanese destroyers with cruisers so the remainder of the battles in 1943 (with one exception) were classic destroyer duels. The Americans still enjoyed the technical edge provided to them by radar, and now added new, more aggressive tactics. The final result was the defeat of the Imperial Navy’s finely trained destroyer force and the demonstration that the Japanese were unable to stop the Allies’ advance.

Mark E. Stille (Commander, United States Navy, retired) received his BA in History from the University of Maryland and also holds an MA from the Naval War College. He has worked in the intelligence community for 30 years including tours on the faculty of the Naval War College, on the Joint Staff and on US Navy ships. He is currently a senior analyst working in the Washington DC area. He is the author of numerous Osprey titles, focusing on naval history in the Pacific. He is also the author of several wargames.