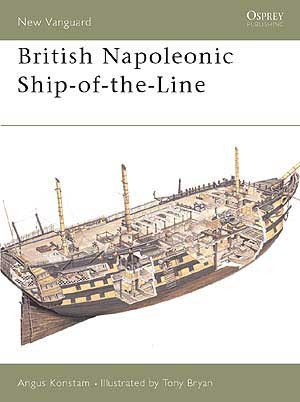 The French Revolutionary and Napoleonic Wars encompassed a period when rival European fleets vied for naval supremacy, and naval tactics were evolving. The British Royal Navy emerged triumphant as the leading world sea power, and the epitome of Britannic naval strength was the Ship-of-the-Line. These ‘wooden walls’ were more than merely floating gun batteries: they contained a crew of up to 800 men, and often had to remain at sea for extended periods. This book offers detailed coverage of the complex vessels that were the largest man-made structures produced in the pre-Industrial era.

Angus Konstam is an experienced Osprey author with over 10 titles in print. He has long been associated with the sea, having served in the Royal Navy, practised underwater archaeology and curated a maritime museum. His understanding of the subject is based on years of study of maritime history, and intimate knowledge of the leading maritime museums on both sides of the Atlantic.

Tony Bryan is a freelance illustrator of many years experience after initially qualifying in Engineering and working for a number of years in Military Research and Development. Tony has a keen interest in military hardware – armour, small arms, aircraft and ships – and has produced many illustrations for partworks, magazines and books, including a number of titles in the New Vanguard series.