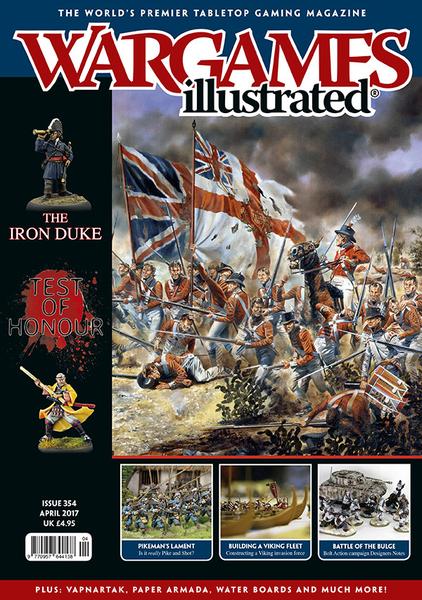 Observation Post
Our latest gander at a range of products, including our ‘Spotted at…’ show feature.

Theme: the iron duke
How did Wellesley become Wellington and what can we do to simulate the man
and his methods on the tabletop?

Designer’s Notes: The Battle of the Bulge
The author of the latest Bolt Action Campaign Book shares his thoughts
regarding its creation.

Theme: Arthur Wellesley in India 1797 – 1805
The most formative period in his military career, the future Duke’s time in
India taught him many of the skills he often employed as a commander.

Rules Showcase: Test of Honour
Enter The Age of the Samurai, as envisaged by the latest boxed game from
Warlord.

Theme: Foes of a Sepoy General
A military commander is often judged by those he fought. Pete Brown takes
us on a journey to view the armies of the Marathas of India.

Foteviken 1134
Post-Viking era combat, with a Danish civil war battle for the crown which
saw some new tactics and the use of mercenary cavalry.

Theme: Architect of Victory
Any discussion of Wellington always turns to this iconic battle. Steve Wood presents his take on the
Allied commander and his role in the battle itself.

Pikeman’s Lament – ‘But is it really Pike and Shotte?’
We explore the game mechanics and historical credentials of this new game.

Theme: Scum of the Earth
How do you re-create Wellington’s British troops for the tabletop? A beginner’s guide to those little men in red.

Show Report: Vapnartak 2017
One of the first ‘big’ shows of the UK gaming calendar. Our correspondent took a journey to York to
check it out.

Figure Spotlight: Pseudo-fantasy barbarians
A slightly tongue in cheek guide for those looking to create a more ‘classic fantasy’ barbarian army.
the art of water & building a viking fleet
A look at the work undertaken to get a fleet of longships ready for the tabletop and simulate their
medium of travel.

Paper Armada
The latest offering from Peter Dennis and Helion Books, in their Battles for Britain series, allows you to
field an endless armada of easy to assemble paper ships.
fighting talk: WARP FACTOR
The latest incendiary article from Barry Hilton seeks to challenge once more the accepted norms and our
wargamer’s perceptions of history.

Celebrity Deathmatch
Our game at Salute 2017 promises to be a bit silly and a lot of fun, pitting our Giants In Miniature
against one another in a gladiatorial arena. Are you not entertained?
club focus: LONE STAR HISTORICAL MINIATURES CLUB
A look at this multi-faceted group of hobbyists out in Texas, USA

Figure Directory
Your handy guide to the origins of almost every miniature featured in the magazine.