The first of the 500 Nations range we are selling in conjunction with Conquest Miniatures, the Seminoles provided US troops with quite a headache during the Seminole Wars of the early 19th Century. Including famous leaders such as Osceola and Tuko-See-Mathla they provide a colourful and effective force. 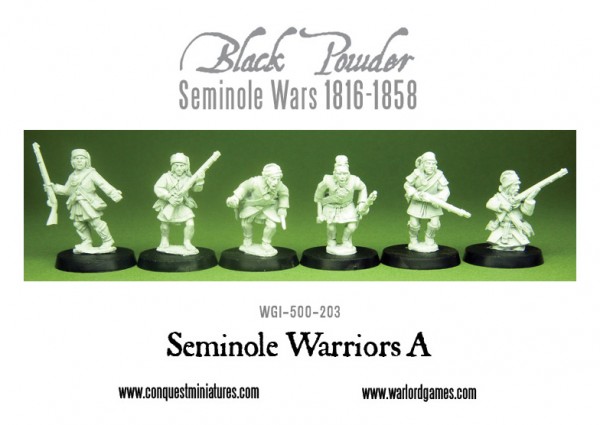 Originally bands of Creek Indians from Georgia and Alabama who migrated to Florida in the 1700s, these Native Indians again moved to what is now Florida after conflicts with Europeans and other Indian tribes. During the 1770s these Florida Indians collectively became known as Seminole, a name meaning ‘wild people’ or ‘runaway’.

Conflicts with white settlers were increasing in frequency and ferocity by the turn of the century – these settlers wanted Indian land and their former slaves back. In 1817, these conflicts escalated into the first of three wars against the United States. Andrew Jackson (military and political opportunist and future U.S. President) invaded what was then Spanish Florida to settle the ‘Indian Problem’. Causing an international furore Jackson waged what was to become known as the First Seminole War, lasting from 1814 to 1818. Burning Indian towns, capturing black former slaves and even hanging a Seminole medicine man as well as two Englishmen he suspected as inciting the Indians, Jackson’s forces pushed the Seminoles farther south.

Although the First Seminole War had ended things were to get much worse. Through a variety of punitive treaties, the United States government sought to force Florida Indians to sell their livestock to them, return runaway slaves to their previous ‘owners’ and leave their ancient Florda homelands for new settlement in Arkansas. Andrew Jackson, now President of the United States, pushed through the Indian Removal Act in 1830 and effectively underlined the US desire for relocation of the native Indians in favour of their lands being settled by the white man.

The inevitable clash this policy caused finally began in 1835 and would last seven fateful years – arguably the most tragic in the relations between the US and the Indians east of the mighty Mississippi river. This Second Seminole War saw the US Government fund the forced removal of over 3000 Indian men women and children from Florida to Oklahoma. What set this Indian war apart from other is this being the only conflict that saw the US Navy and Marine Corps join the Army in the fighting. A brutal conflict with little quarter given on either side is well summed up by the ambush of Major Francis Dade as he marched his troops from Fort Brooke towards Fort King.  180 Seminole warriors led by Micanopy, Alligator and Jumper attacked. Only one man of that army detachment survived the ambush…

The campaigns of the Second Seminole War were an outstanding demonstration of guerrilla warfare by the Seminole. Jumper, Alligator, Micanopy and Osceola, leading less than 3,000 warriors, were pitted against four US generals and more than 30,000 troops. The Second Seminole War lasted from 1835 to 1842 and was the fiercest war waged by the US government against American Indians. The United States spent more than $20 million fighting the Seminole in a war which left more than 1,500 soldiers and uncounted American civilians dead.

As the Second Seminole War drew on the US forces resorted to more desperate measures such as cunningly (or treacherously, depending on your viewpoint) capturing and then imprisoning the  Seminole leader Osceola on 20th October 1837 after stating they wanted a truce to discuss peace. The US confidence that with Osceola out of the picture the war would be wrapped up quickly failed to materialise as other Indian leaders kept the war going for years to come.

A Third Seminole War broke out in 1855, largely over land disputes between the remaining Seminoles and white settlers. Constant military patrols and rewards for the capture of Indians reduced the Seminole population to about 200 when the Third Seminole War ended in 1858. 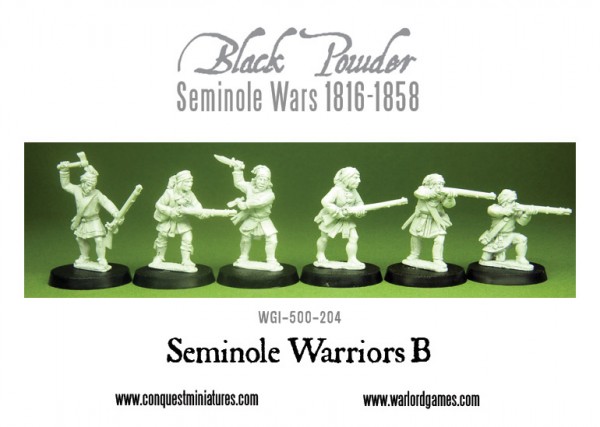 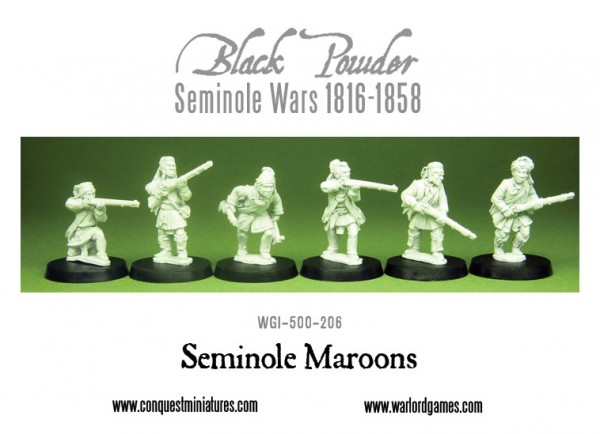 The maroons were runaway black slaves who had escaped plantations in South Carolina and Georgia, fleeing to Florida. Along with other elements of the Seminole community they relocated from Florida to the Oklahoma area following the Seminole Wars. Many would relocate again, this time to Mexico, to avoid slave catchers before some eventually returned to the United States early in the 20th Century. 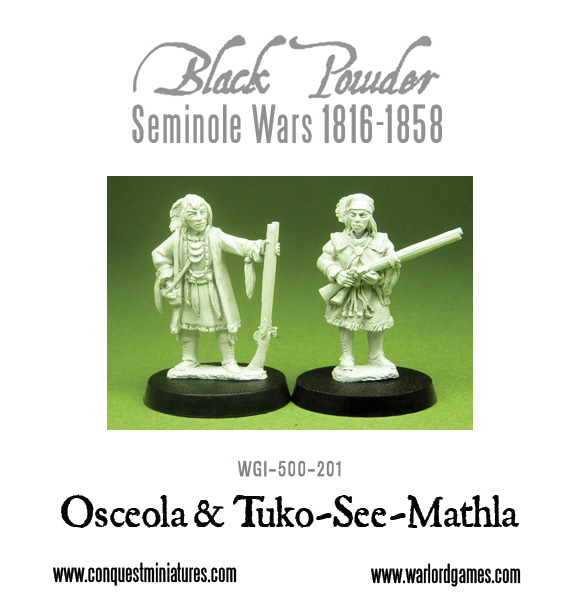 The famous warrior Osceola (AKA William Powell) was a well-dressed, handsome man with a reportedly huge ego. Masterminding successful capaigns against five US Generals Osceola also eliminated the United States’ Indian agent and took severe punitive action against any who would cooperate or side with the white man. With skilled oration and great bravado Osceola became the living embodiment of the Seminoles and their reputation for non-surrender.  Captured, controversially, under the flag of truce offered by US General Thomas Jessup, Osceola was imprisoned, dying in a prison in Charlestown in 1838 as the most famous American Indian of the time.

Tuko-See-Mathla (AKA John Hicks) was well liked by the US authorities and persuaded the Florida Indians to elect him their Supreme Chief. However, Seminole Indians still recognised their hereditary leaders such as Micanopy. Tuko-See-Mathla did what he could to keep the peace and even participated in treaty talks in 1832 and 1833. This put him at odds with his own people, who believed him to be too conciliatory. He was not totally conciliatory towards the United States, complaining many times about the treatment of the Florida Indians. Mystery surrounds Hicks’ death in 1833- some say he was murdered by Osceola whilst others suggest he died of natural causes.