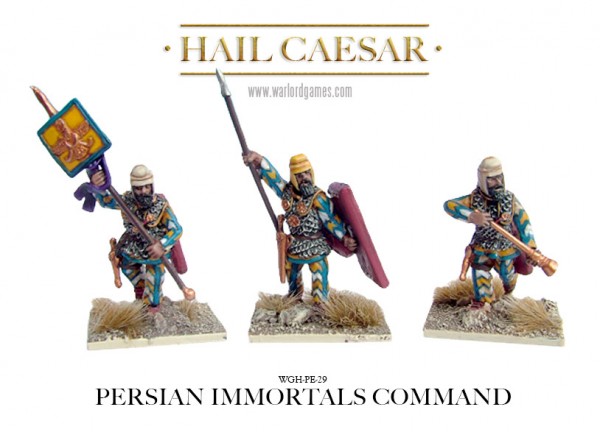 Arguably the most famous and feared troops in the Persian army, the Immortals were the best troops the Persian army could field and only ever took to the field when the King did.

The Immortals were so called because if their number ever fell below 10,000 through ill health or death they were instantly replaced, Giving the impression that their numbers never diminished. The Immortals were the best the Persian army had to offer and only ever accompanied the great king when he lead his army on campaign.

They wore the finest scale armour made in the Skythian style and were equipped with shields, spear and bow. They would also of carried an Akinakes side arm. Their clothing would have been highly decorated and presumably coloured with the most expensive dyes, such as yellow, blue, red and purple. 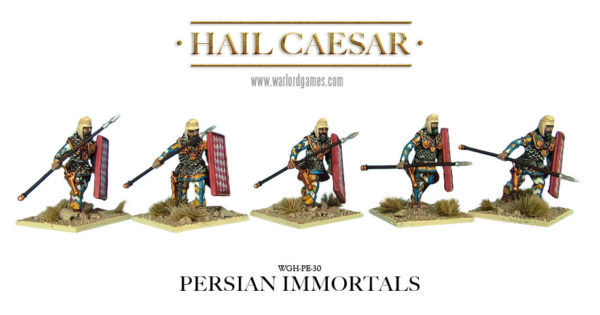 The Immortal commander carries a longer akinakes, in the Skythian style. His status is shown by his saffron dyed tiara style soft cap. Its possible that the scales of his cuirass could have been plated with gold.

The musician bears the typical trumpet of the period. He has no shield so probably would have retired from the front line when the unit came into combat. He still carries a bow case on his right hip for ranged engagements.

The colours of the Immortals.

Stephen May gives us his thoughts on how best to paint your Persian Immortals.

Take it away Steve…

Unlike the majority of the Persian army, some glazed brick depictions of the Immortal guard in full colour have survived. Although they are wearing the Elamite robe and are from a slightly earlier period, it is a good indication of how they were decorated and coloured. Depictions of what are thought to be the kings immortals are also found on the so called “Alexander sarcophagus” fragments of elaborate colouring have survived.

It is highly likely that uniform was issued to the Immortal guard by the king. This clothing would have been highly decorated and made from the finest materials, which would have been dyed with expensive dyes such as yellow, blue, red and purples (but not the royal purple of the king).

Herodotus states that the native Persians wore scale armour and were richly adorned with gold. A golden torc around the neck was also symbol of being Persian and not a member of a subject nation.

Large amounts of Persian gold jewellery have been found and some can be seen on display at the British museum. Some scales from armour have been found in Iran, these are usually made from Iron or bronze, some of which are plated with gold.

I painted their clothing in contrasting vibrant colours, this is a chance to experiment with colour combinations that you would not usually dare put on an historical figure!

Decoration has been applied in straight lines, diamonds and other geometric shapes.

The same method has been used on the shields, but using different colours to the clothing.

Jewellery and other details such as the akinakes and flower shaped ties for the shoulder pieces of the corselet can be painted to represent precious materials such as ivory or lapis lazuli.

The scale armour can be painted as iron or plated gold, or a combination of the two.

It has been suggested that the unusually dark skin of the Immortals depicted on the glazed bricks of Susa may indicate that not all Immortals were native Persians, or that they are the descendants of noblemen that have intermarried with other ethnic peoples, perhaps for for diplomatic reasons. 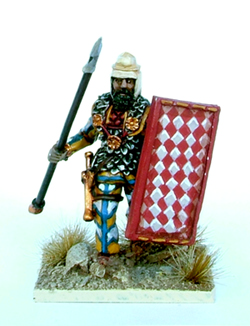 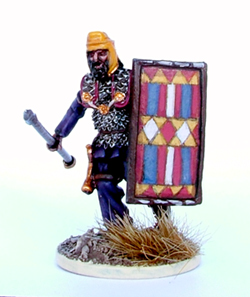 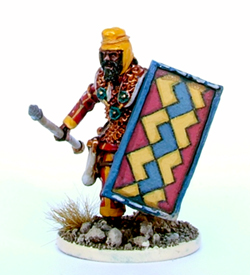 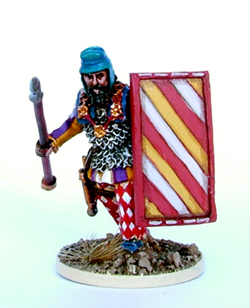 The Persian Immortals are now available in our store either as an infantry pack, command pack or as a regiment!