A vicious Struggle fought in the Twilight of the Third Reich...

Little-known outside of Georgia, the Netherlands, and the former Soviet Union, the vicious struggle fought on Texel in the twilight of the Third Reich is a fascinating story. In this article, we will outline the battle itself, as well as the reasons for its occuring, and look at how it can be translated to the tabletop for games of Bolt Action!

The Uprising saw the 882nd Infantry Battalion “Königin Tamara” of the Wehrmacht’s Georgian Legion revolt against the Nazi regime, killing many of their German officers and comrades. It led to over a month of hard fighting, and saw more than 1600 casualties. What began in betrayal ended in a bleak fate for the survivors – in many cases little more than a choice of executioner. How this situation came about requires some explanation, and an eye to be cast back to the Great War.

World War One and the Inter-War Period

Like many Transcaucasian states, Georgia experienced prolonged turbulence and instability during the early part of the 20th Century. Previously an independent nation, by the outbreak of the First World War Georgia was a part of the Russian Empire, and as such became involved in the fighting against the Central Powers. In 1915 a German diplomat and military officer, Friedrich-Werner, Graf von der Schulenburg, oversaw the formation of the “Georgian Legion” from volunteers from the region, this being the first instance of Georgian troops in German service. Both the Germans and their allies in the Ottoman Empire vied for overall control of the formation, which ended the war having seen little meaningful service.

By 1921, Georgia had been engulfed by the expanding Soviet Union, after a mere three years of independence. Georgians thus found themselves again called upon to fight for Russia against Germany when, in 1941, the Wehrmacht launched Operation Barbarossa – the invasion of the Soviet Union.

This massive assault took the Soviet Union by surprise, and the unprepared Red Army was thrown back deep into Russia, losing millions of troops to German captivity in the opening phases of the war. For these prisoners, the winter of 1941/42 was unimaginably harsh, with some camps suffering mortality rates as high as 95%.

Starting in December of 1941, the Wehrmacht began to consider the use of Soviet POWs as volunteer troops, or “Osttruppen” (literally “Eastern Troops”). Georgians were seen as particularly suitable, given their history of German service during the First World War. Nazi racial propaganda also painted the Georgians as palatably “Aryan”, and by the autumn of 1942 the second “Georgian Legion” was formed. Initially used in a limited role on the Eastern Front alongside the Brandenburger special operations units, the Legion eventually grew to 13 battalions in Wehrmacht service, mostly being used for anti-partisan duties in Poland and the Ukraine.

As the Wehrmacht expanded its use of Osttruppen – the majority of whom chose to join the Germans simply to escape the hellish conditions of the prison camps – incidents of desertion and outright mutiny among these units began to rise. This prompted many units of foreign volunteers to be sent increasingly far from the front lines, and used for rear-area garrison duties.

One such unit was the 882nd Infantry Battalion “Königin Tamara”, which was sent west to Holland in 1943, eventually being deployed to the small Dutch island of Texel in early 1945.

With the writing on the wall for all but the most fanatical National Socialists by 1945, Texel was viewed as a relatively safe posting – indeed, the Allied plans called for it to be ignored along with much of the Netherlands until after German capitulation! Nonetheless, giving some credence to German concerns, elements of the 882nd had already made contact with local Dutch Communists. Small wonder then, that when orders were issued for the unit to be sent to the Western Front that April to help slow the relentless Allied advance, these discussions quickly escalated into outright mutiny.

On the night of April 6th, 1945 (known to the Georgians as “Den Rozhdeniya”, the “day of birth”), the 882nd rose up under the leadership of a former Soviet pilot, Leutnant Shalva Loladze, and slaughtered over 200 of their German officers and erstwhile comrades in a night of savage bloodshed, taking over a large portion of the island. Nonetheless, a number of key positions remained in German hands, most notably the airstrip and the artillery batteries on the north and south of Texel. These batteries, comprising a number of captured French howitzers and 88mm flak guns, were mistakenly assumed to be able only to fire out to sea. In addition to this, the German commander, Major Klaus Breitner, escaped the carnage, and went on to stiffen German resistance on the island. 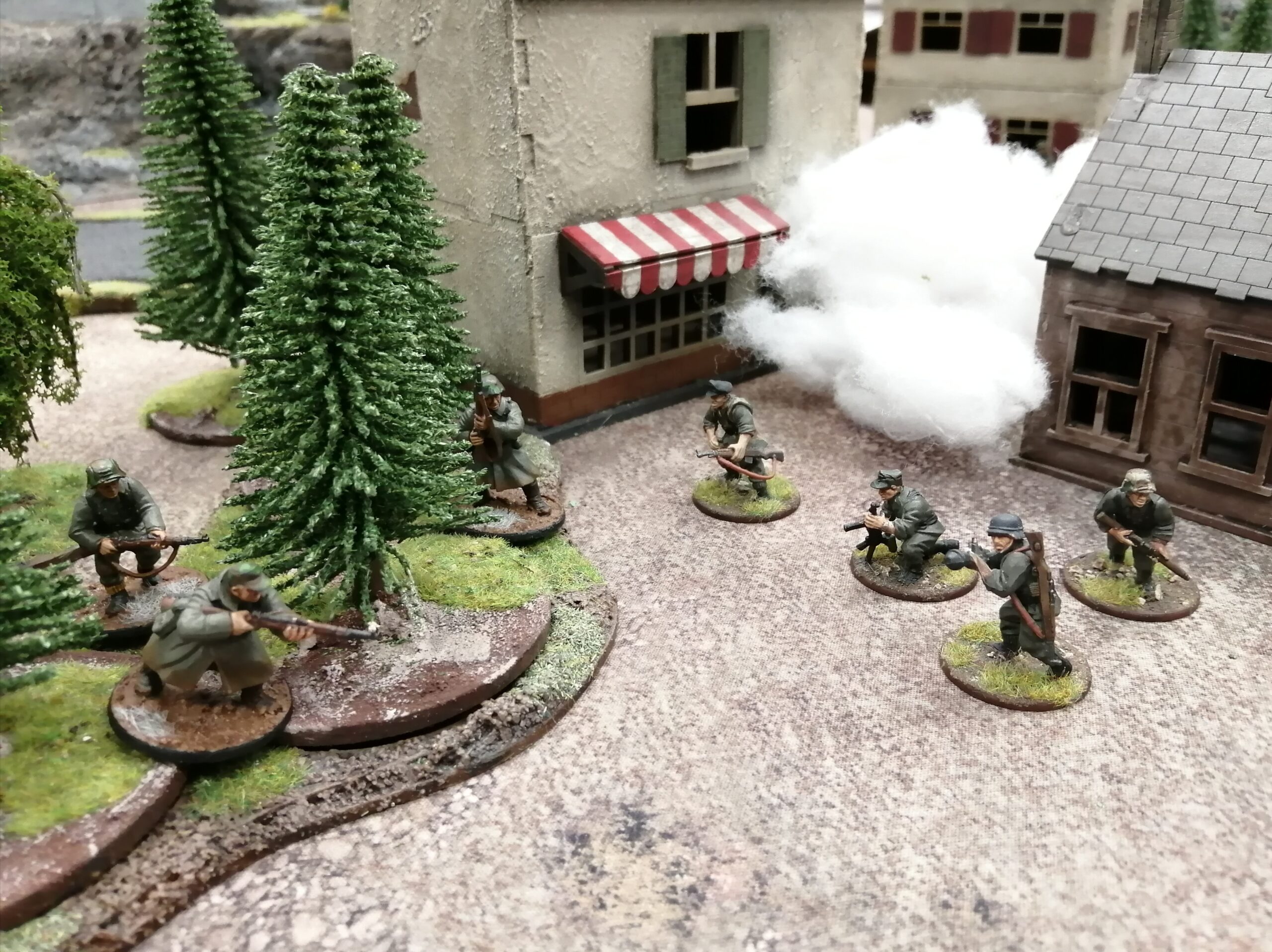 Over the next five weeks, the initial successes of the Georgians were soon reversed, as the naval troopers of the 163rd Marine-Schützenregiment slowly re-took the island in furious hand-to-hand fighting, which caused significant damage to villages on the island and led to the deaths of more than a hundred Texel natives. Alongside the riflemen of the 163rd, five German tanks were deployed. No readily accessible record of their type exists, but it is likely that they were either captured French machines or obsolete Panzer IIs or IIIs, vehicles often used by the Wehrmacht for security and policing operations.

Fighting was fierce, leading to hundreds of German casualties, as the 882nd resorted to guerrilla tactics of the kind they themselves had encountered and personally countered on the Eastern Front. Heavily-fortified positions around Texel’s lighthouse required elite German assault pioneers and flamethrowers to reduce, and any hope of a Georgian victory soon began to fade.

During this change of fortunes for the Georgians they were assisted by the Communist Dutch partisans both in combat roles and later being hidden by them. Even a few members of the Dutch Fascist movement (the NSB) who were originally going to be shot out of hand and instead spared and imprisoned by calmer Georgian soldiers from the vengeful communist partisans. These men in turn later made efforts to assist some of the Georgians into hiding when their luck failed them. Even in this tale of treachery and retribution we see acts of solidarity between the confusing array of combatants.

The Georgian plan hinged on Allied support. Having failed to secure a radio capable of contacting them in the opening stages of the fighting, after 5 days a dozen Georgians and Texel Islanders set off for England in the island’s only lifeboat. One can only imagine the surprise felt by the patrol who responded to their flares when they came ashore on a Norfolk beach! On Texel, meanwhile, the fighting continued unabated, with Loladze being killed on the 25th of April.

Despite this news of the situation on Texel, Allied high command was in no great hurry to come to the rescue of the embattled Georgians. Instead, their plan called for large swathes of the Netherlands to be bypassed, instead concentrating on the advance into Germany. Prisoners could be rounded up at leisure following the Reich’s surrender. As such, it was not until the 20th of May until a Canadian unit arrived on Texel to enforce the German surrender. 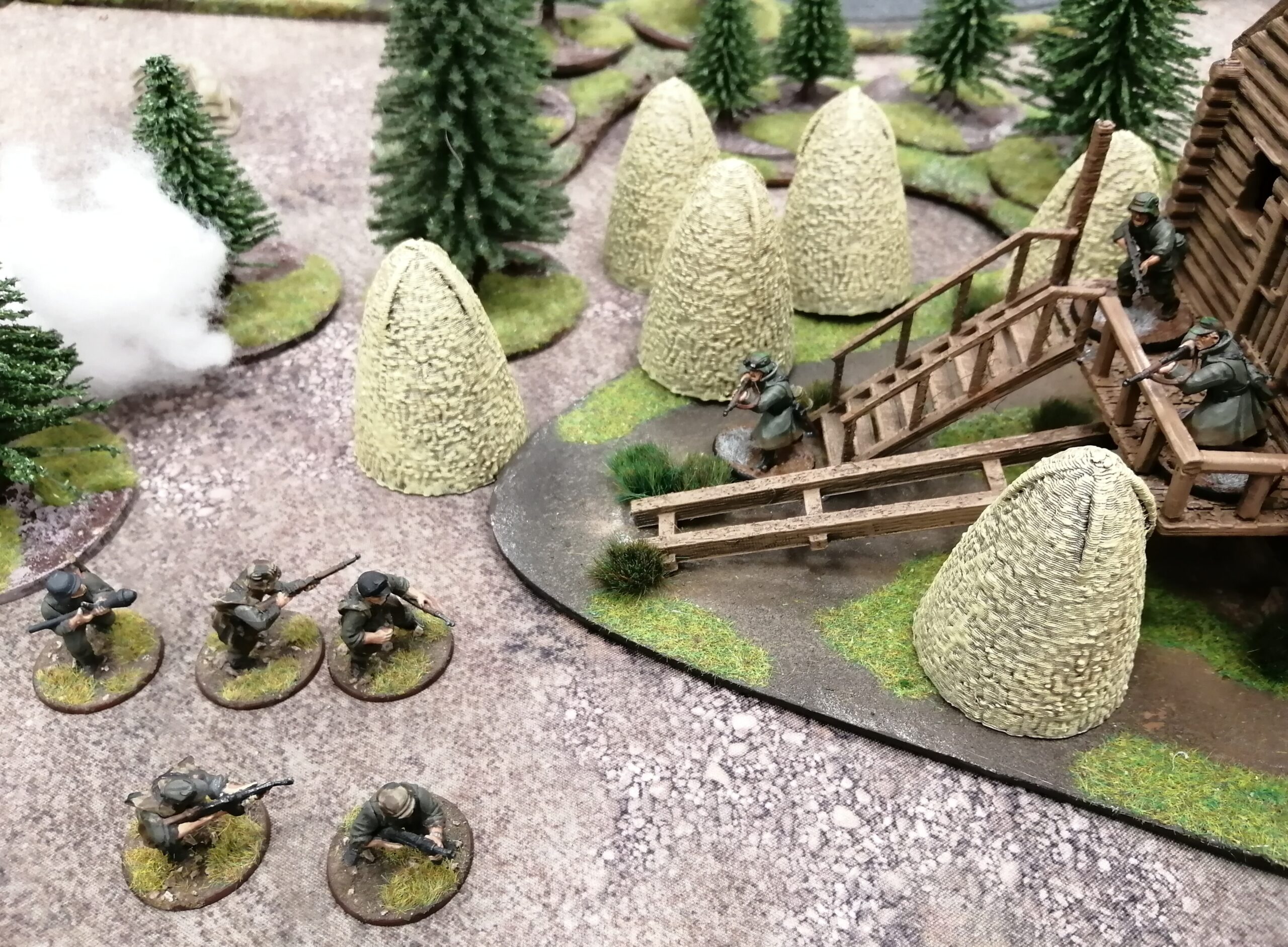 By the time the Canadians landed, the fighting on Texel had raged for almost six weeks, with little quarter given on either side. By the end, the Germans had suffered over 800 killed, and the 882nd was reduced to just over 200 men, mostly hiding among coastal minefields or with sympathetic Texel families. Those Georgians who fell into German hands were reportedly treated as nothing more than traitors, being forced to dig their own graves before being executed by the vengeful Germans.

Tragically, under the terms of the Yalta conference, the surviving Georgians were handed over to Soviet custody, and the majority were sent to the gulags along with their families, with those who survived only being released in the 1950s. In later years, Soviet attitudes towards the mutineers changed, and they eventually came to be recognised as “Heroes of the Soviet Union”. Nonetheless, the fighting on Texel remains a largely forgotten engagement, one of a few ultimately pointless battles which endured after the death of Adolf Hitler, and the surrender of Nazi Germany.

If you want to replay this unusual battle in your own games of Bolt action and Bolt action Firefight, use German Grenadiers vs Winter Germans or Blitzkrieg Germans to differentiate the Georgian troops from their German counterparts, while our partisan range could easily represent the communist partisans and even the fascist NSB guards! Additionally, we know there were some armoured vehicles deployed by the Heer forces, these would have been older models or even captured French models, Panzer II’s and Somua S35s would be perfect for this purpose!

For anyone wanting to run this as a game of Bolt Action I would recommend using the Armies of Germany lists to make the Georgians and Germans. However, to represent the Georgians vastly different fighting style after they adopted Guerilla actions use the army special rules for Partisan armies as found in Armies of France and the Allies. This will also make for a more interesting game with both armies using highly different play styles! You could also tie a few games together featuring Georgians and Germans and also the Communist partisans and fascist NSB, or even run a hypothetical what-if? battle where the Canadians landed a few weeks earlier for even more variety of forces!

I have also included a suggested army list for each force for anyone who wants to play along at home, feel free to mix and match forces based on what you have available, however, as long as it keeps to the theme!

This force has been inspired by the real forces present, a ragtag bunch of any unit close enough to exact retribution on the Georgians rebels. The rules are slightly bent to allow a Major without the Lieutenant, but for the sake of a fun and historically themed battle, I am happy to look the other way! Also note the French tank, I’ve run it as inexperienced to represent the crew being less experienced on the French machines.

I have made up this force with the idea that they wouldn’t have very much good equipment as such, they’re running older units and if anyone plays this game, I’d highly recommend running them with the army special rules for partisans found on page 98 of armies of France and her allies. I have also included a few Partisan units to represent the Dutch communist underground that helped the Georgians over the weeks of fighting!

For a game using these 2 forces, I’d recommend a board of grassy plains and a few scarce woods, with a central Dutch village set up for the forces to fight over. I also think it would be a lot of fun to have the Georgian forces start the game in the town and must fight their way out of the German encirclement! As always, having fun with the set up is vital, so play around with the forces and please let us know what you think of the scenario should you try it out! 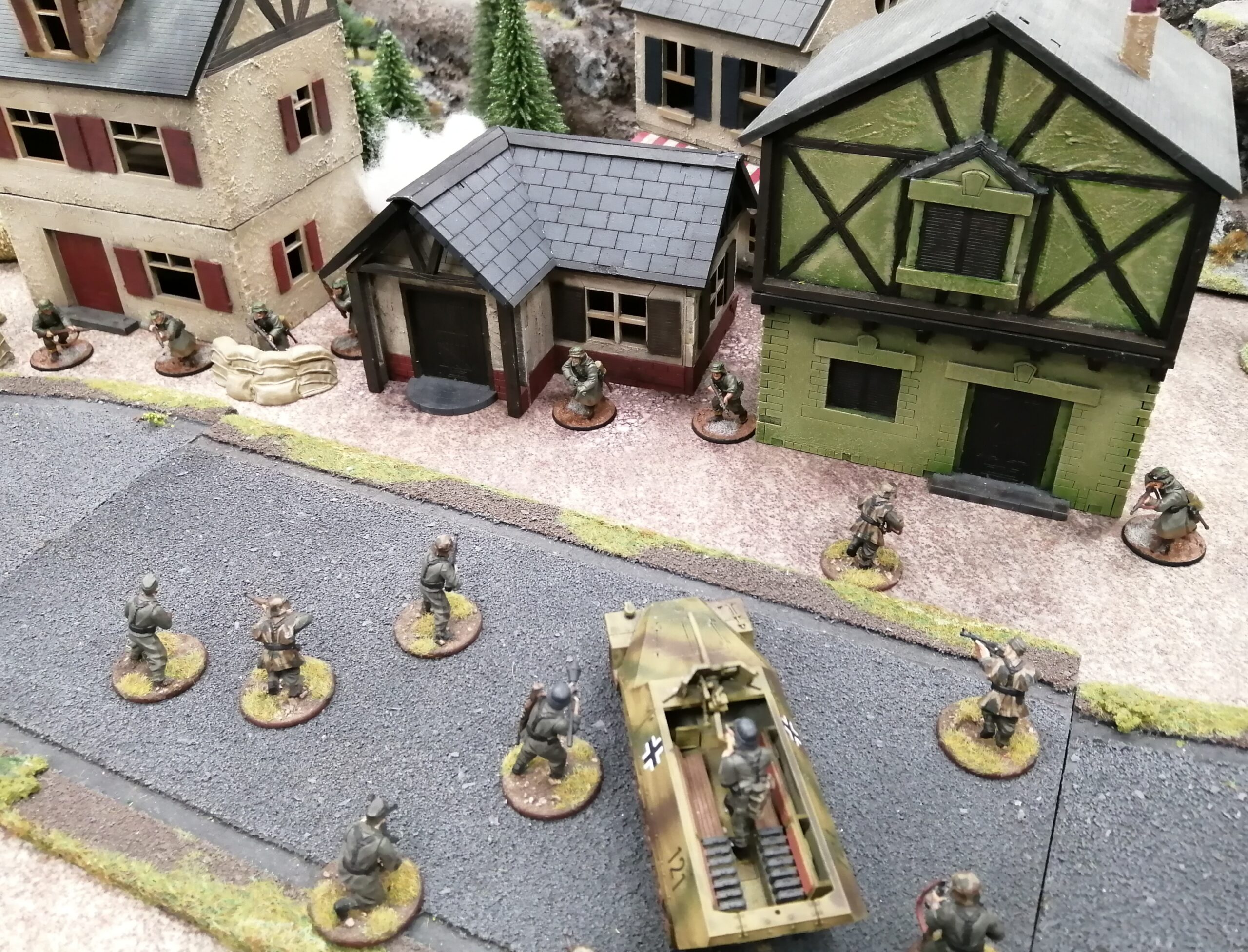 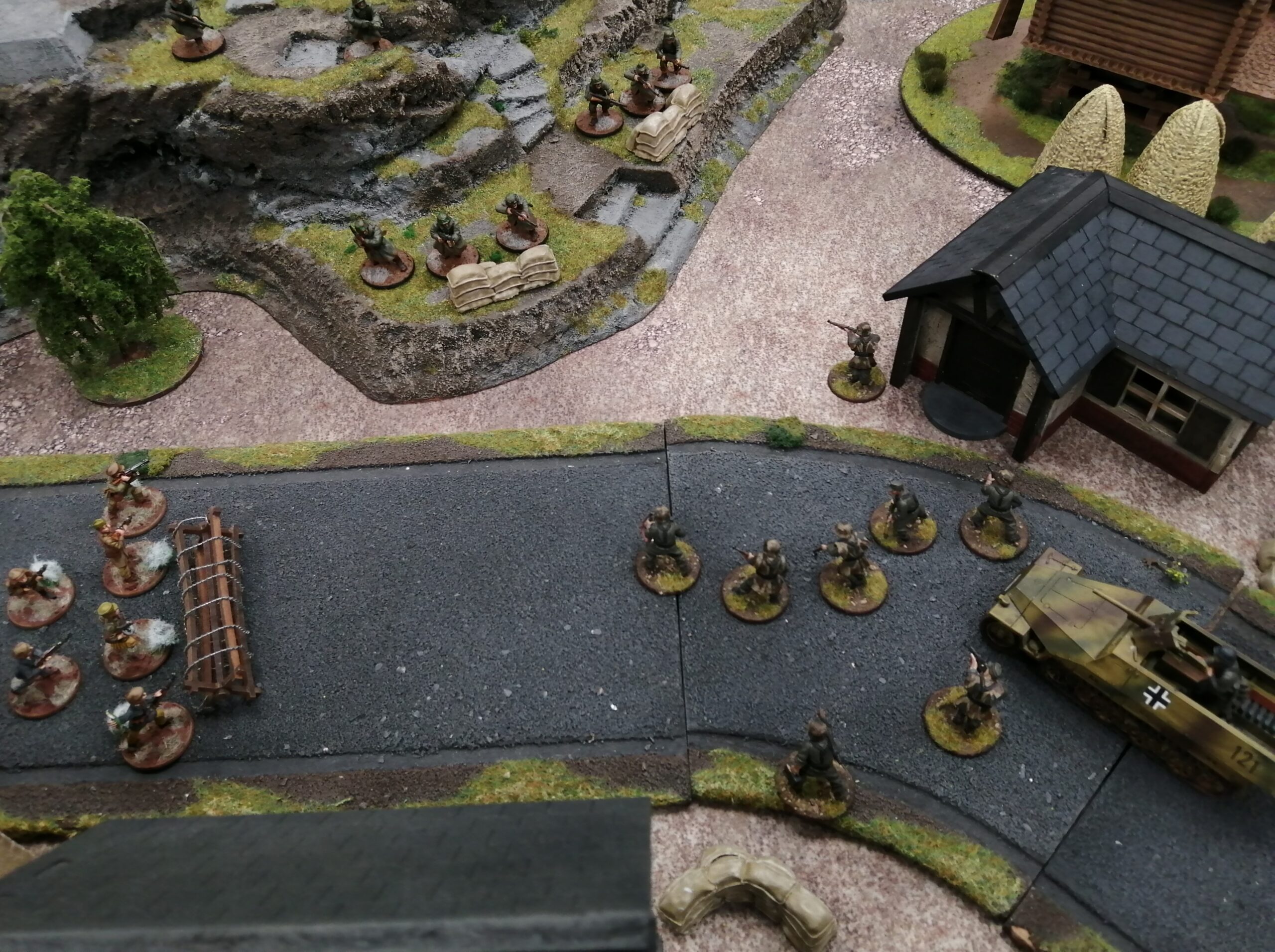 And finally a note to the inspiration for this article; the book “Night of the Bayonets” By Eric Lee; kindly loaned to me by Bossman John Stallard! If you find this article interesting I’d highly recommend reading the book for a deeper dive on the topic.

Max is most frequently found at either in the customer service office or at a painting table. When not painting or working Max can frequently be found at Bolt Action tournaments or camping in a field wearing silly costumes!
View Profile | View all posts by Max Ayson
The Red Right Hand: Orlok and his One Man War
Beyond the Gates of Antares: An Introduction