The early origins of the Hittites are not entirely certain, but it is likely the people we call Hittites arrived in Anatolia about 2000BC and came from Europe as part of a broader migration from the Black Sea region and Pontic steppe. In diplomatic correspondence of the Late Bronze Age the realm is the land of Hatti (Khatta in Egyptian). 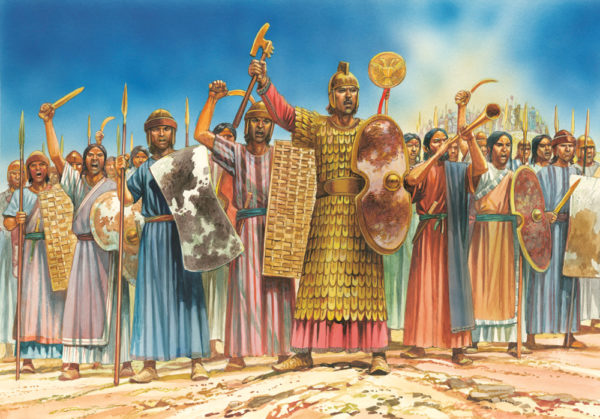 The Hittites adopted the cuneiform script from the Assyrians, shortly afterwards, and they fought amongst themselves and with their neighbours during the first half of the second millennium down to about 1400BC. In 1531BC a Hittite king even led an army into Mesopotamia and sacked Babylon together with his Kassite allies. From about 1400BC King Tudhaliya established the Hittite Empire, which endured until the infamous Late Bronze Age Collapse from about 1180BC. During these few hundred years the Hittites rose to become one the great powers of the ancient Near East, the rivals and equals of Egypt and masters of the ancient cities of Syria and the upper Mesopotamian region. 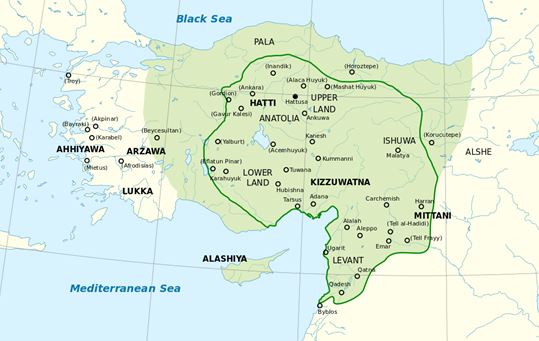 A map of the Hittite Empire during the reigns of Suppiluliuma I and Musili II circa 1350-1295 BC at the time of its greatest extent. Hittite tributary lands also encompassed Luwian states in western Anatolia at various times, including Arzawa and Ahhiyawa – which have been given provisional, though likely, locations on this map.

The King of the Hittites was not just a hereditary ruler; he was also the chief priest of the Hittite gods and their representative amongst his people. Every year he would tour the various holy sites throughout the kingdom to perform the rituals that would bring prosperity and success. These Kings began to be referred to as ‘My Sun’ – a sort of Hittite equivalent of ‘Your majesty’. King Tudhaliya allied with or absorbed his immediate neighbours, including the great city-state of Aleppo and much of Mitanni to the east, and the various Luwian states including Arzawa to the west. It was the beginnings of Empire! 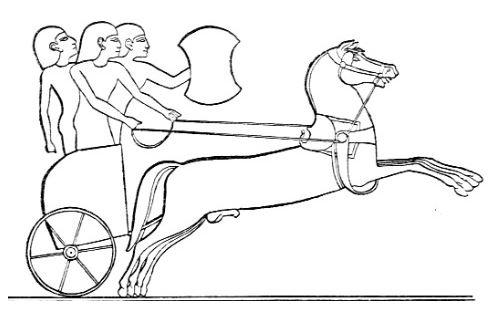 Sadly, as tends to be the way with these things, many of the lands conquered by Tudhaliya subsequently fell into the hands of enemies or rebelled, and so had to be conquered all over again by King Suppiluliuma. The chief enemies of the Hittites at this period were the Egyptians and Assyrians, but they also faced rebellious subject states in the Luwian lands to the west and the cities of Syria and the Levant. Another persistent enemy was the Kaska (or Gasgan) hill tribe that lived in the region to the immediate north of the Hittite homeland. 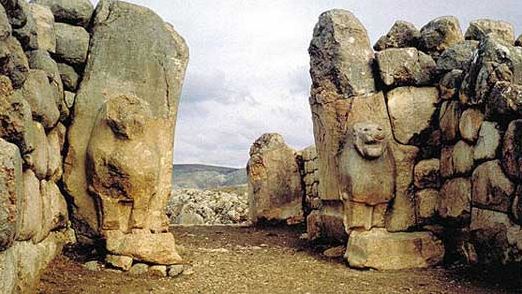 The ruins of Hattusa the Hittite capital in central Anatolia – this is the main gateway to the city, commonly known as The Lion Gate.

The wealth of the great cities of Syria and Canaan was the envy of Egypt, Assyria and the Hittites, and a great deal of the warfare of the period revolves around these ancient super-states’ attempts to take control of this important region. It was the Bronze Age equivalent of the later Silk Road – a region where trade routes converged from east, west and south. Mighty cities such as Aleppo and Carchemish became fabulously rich as a result. Although we call these cities, they were really states in their own right, whose kings sometimes became sufficiently powerful to assert their dominance over their neighbours, but generally sought to make alliances with other powers for their own protection. The Hittites usually absorbed these border areas as subject Kingdoms, rather like feudal Lords, bound to the Hittites King by personal treaties. One of the first duties of these feudal Kings was to provide troops for the Hittite armies, which means that the Hittites could field large forces that contained contingents from all their many clients states. Because the cities of Syria and Canaan were so wealthy they often provided a substantial amount of the Hittite King’s forces when he was fighting in those regions. Other clients from the western states would also send troops, and in their case these would be Luwian or even archaic Greeks – Ahhiyawa is usually assumed to be a Hittite rendering of Homer’s Achaia (Byrce et al), whilst Troy was probably part of a Hittite client state called Wilusa – i.e. Homer’s Ilium.

This famous figure (the original is over 2m high!) is carved into the south gate of Hattusa – the so-called King’s Gate. Despite the name, the figure almost certainly represent a god set to watch out over the King and his army as they march from the city to war.

All this means that for the period of the height of the Hittite Empire we are at liberty to use troops from the Hittite lands themselves – the ‘woman warriors’ as the Egyptian Pharaoh dubbed these long-haired warriors – as well as Syrian and Canaanite troops from cities such as Carchemish and Kadesh. Indeed, Carchemish was such an important city that the Hittite King sent one of his sons to rule over it, the foundation of a Hittite dynasty that would endure into the Iron Age – longer than the Hittite Empire itself!

Anyone wanting to know more about Hittites in the Late Bronze Age would do well to read the books written by Australian academic Trevor Bryce – the leading authority on the history of the Hittites. In particular I would recommend:

Here is the Hail Caesar army list for the Hittites extracted from the Hail Caesar Biblical Armies supplement. I have taken the liberty of adding in Canaanite/Syrian Chariots with the option for bow-armed crew, which is a credible alternative and allows for a little more variety when putting together chariot based armies of the period.