With the starter set – ‘Strike Vector One: The Xilos Horizon‘ having arrived in the eager hands of scores of players across the Antarean universe, over the past few weeks we’ve seen an explosion in hobby activity across the internet on various forums, blogs and webpages – with players keen to explore this new universe….

A huge part of this process is exploring new paint schemes and opportunities to turn your hands to new techniques in order to establish your own personalised force.

In Beyond the Gates of Antares, there are no ‘set’ or even ‘standard’ paint schemes – the universe is incredibly vast and varied – the troops of the Concord Combined Command wear armour of all colours depending upon the environment in which they find themselves. For example – forces which fight amongst the inclement crevaces and ice fields of frozen worlds would wear whites and icey blues…. battle groups who fight upon parched desert worlds will favour sandy yellows and dusty browns… strike formations who find themselves deep within the verdant undergrowth of jungle worlds will attempt to blend-into their surroundings with rich greens and browns, painted in camouflage patterning….

And the worlds of Antarean space are as numerous and as varied as it is possible to imagine. Some are thriving jungle worlds covered in all manner of fauna – some familiar, some entirely undiscovered and alien, having evolved over countless millennia untouched, in isolation… 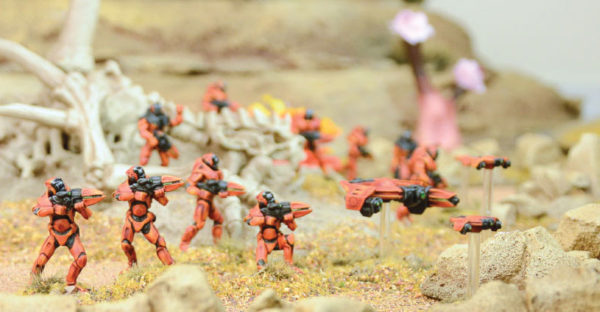 Some are consumed by towering cities – or perhaps entirely cultivated for industry or agriculture to feed the ever-hungry populations of the surrounding societies, their surfaces forever scarred by the rigours of dense populous… and as populations move on, so their buildings and other structures remain to decay – with countless once-thriving worlds now lying inert… still covered in all manner of strange and obsolete structures now left to ruin and dilapidation – their purpose and function long-lost to the annals of time.

Others lie baron, uncharted and unknown – their secrets lying as yet unexplored… deserts of broken rock and lifeless craters… perhaps covered in perma-frost many hundreds of metres thick – or their surfaces entirely covered in water – or unstable and unpredictable volcanic worlds whose surfaces are an unmappable, ever-shifting series of plates in a constant state of flux – huge sections constantly melting away into lava, only to be formed again elsewhere in an endless cycle of regeneration.

All are potential battlefields and home worlds for your forces -.which means that – for all budding C3 Strike Commanders out there, there is absolute free reign when it comes to painting your models. If you’ve not yet seen our Concord Armour Designer – it’s a fantastic tool which we’ve created to help in exploring different colour combinations before committing brush to miniature! 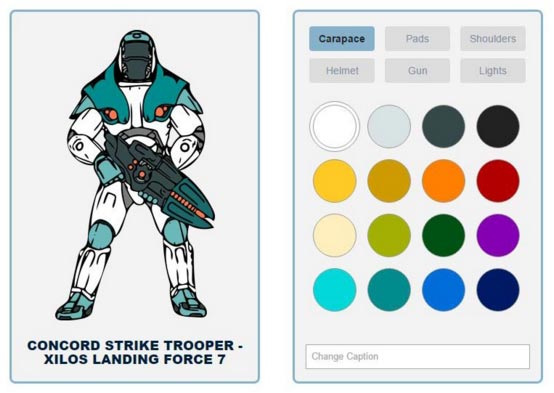 We’ve gathered together just a handful of the colour schemes being worked upon by the community – to show you a small sample of colour schemes which you might want to try on your own models! 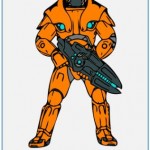 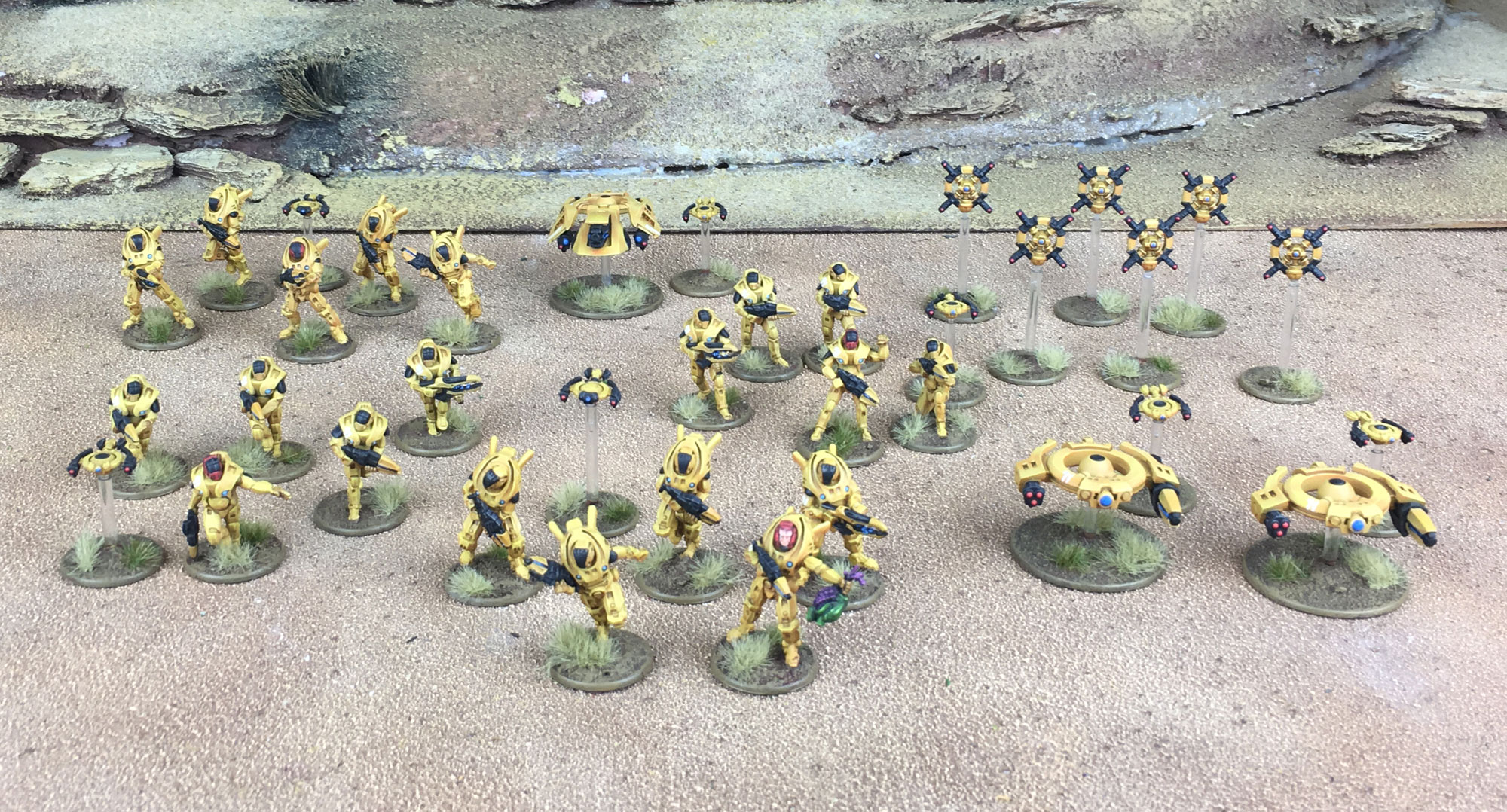 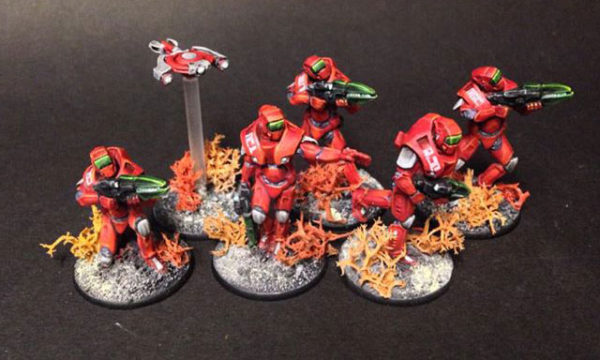 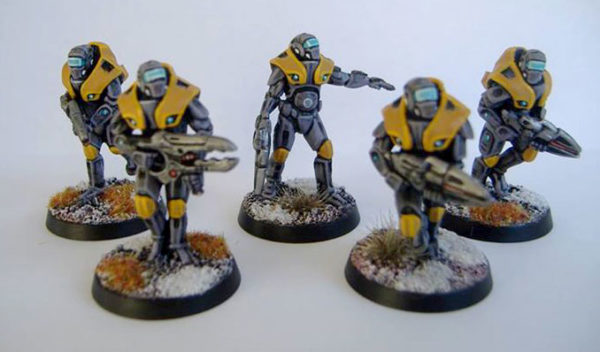 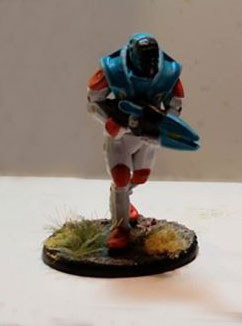 John Gant has used the combination of a white base and striking blue and orange accent colours to give a striking theme! 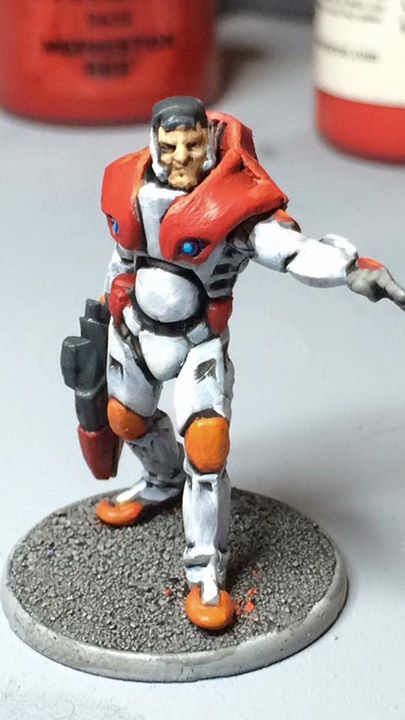 Ben Pik’s scheme could be described as similar – again, white combined with a bold orange accent.

Doug Craig has opted for a metallic feel, in silver and blue – and has used the Army Painter’s Quick Shade Dip to accentuate the model’s detail. 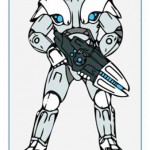 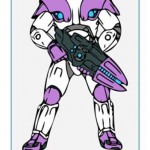 Nathan Wallis Tucker has been experimenting with the Armour Designer tool before committing brush to model.

Einar Olafson looks to have used a similar technique – laying down base colours before Quick Shading as a quick and easy way to add the impression of shading and highlighting. 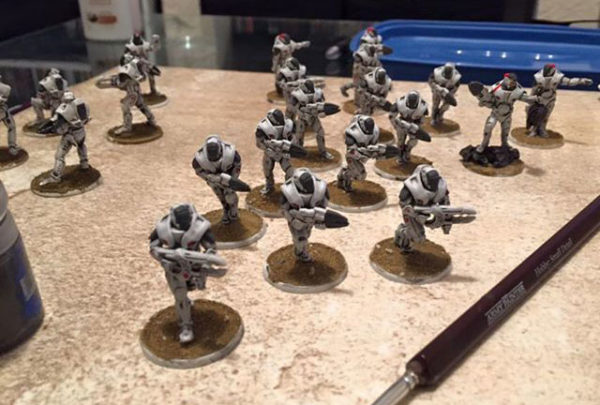 Another from Matt Houghton – whose White Armoured force seems to grow by the hour! 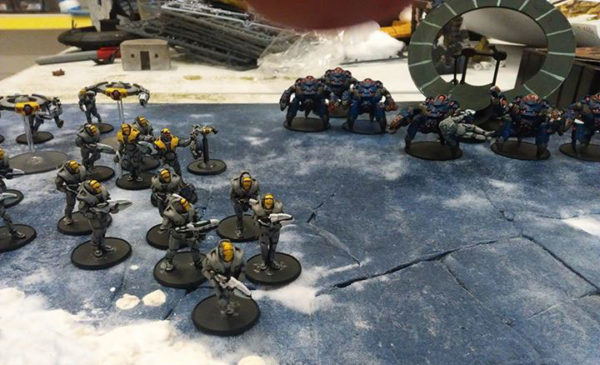 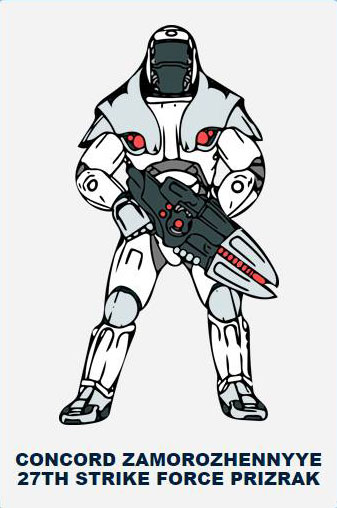 Alex Dawson’s colour scheme combines whites and pale greys which – when combined with black and red accents – make for a simple but effective contrast. 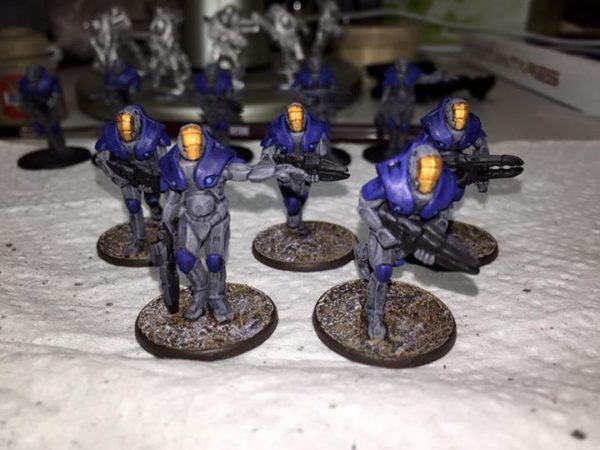 Thomas Flannery has developed a darker, grittier scheme with greys and purples. The warmer gold of the visors really sets them apart. 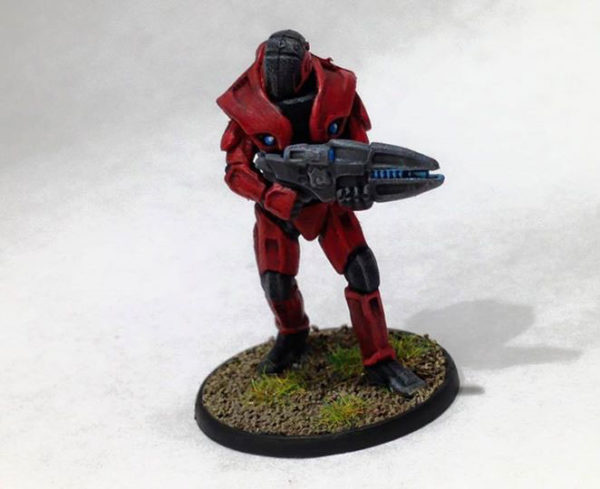 Rob Crawford’s red and black scheme again shows that the Concord look just as good in light or dark colour schemes – and we particularly like the blue accents, which compliment and contrast the core tones beautifully. 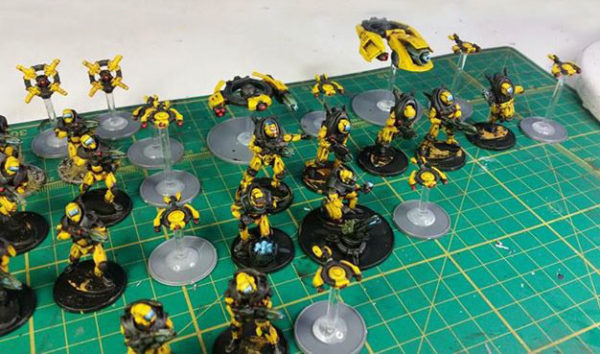 Alistair Osbourne has developed a Bumblebee-like yellow and black combination 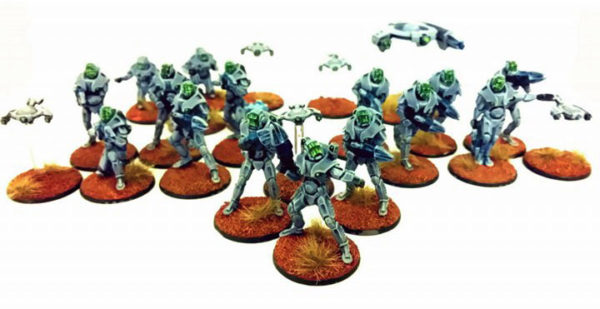 Malcolm Illidge’s Grey-blue scheme, painted by Gareth Evans, is off-set with green visors. The combination of the cool grey-blue against the warm brown of the bases really makes this scheme pop 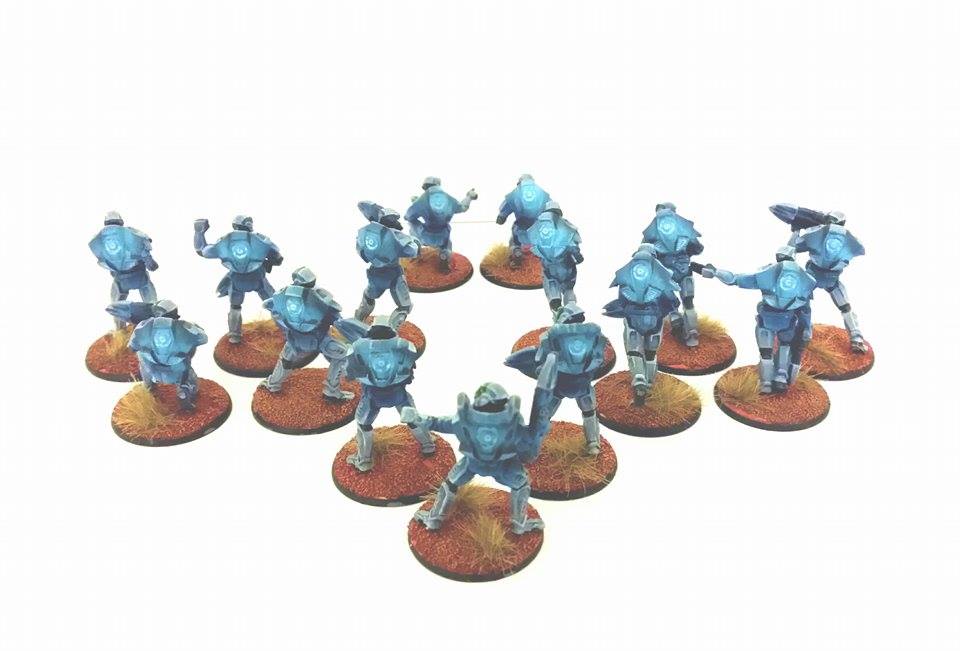 So – as you can see, the Concord models can be painted in a huge variety of colour schemes – and we can’t wait to see more!

So if you haven’t yet – head over to the Warlord webstore and establish an uplink with the C3 to ensure that you’re battle-ready in next-to-no-time! 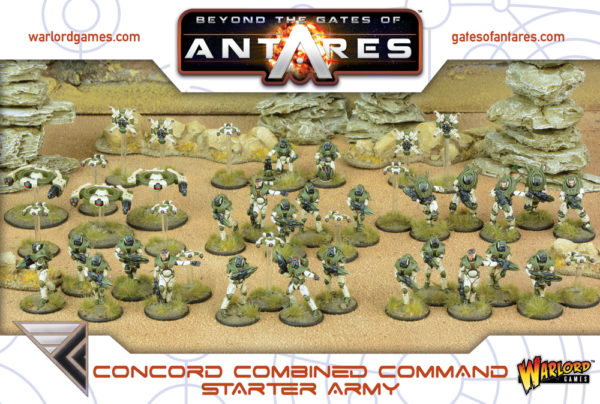