Warlord are proud to support the Worcestershire Ambassadors in their new project, Gheluvelt 2 Gheluvelt 2020, as part of their 20th Anniversary. 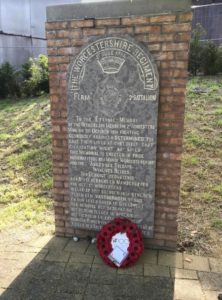 One of the principal ideas is for a group of the Ambassadors to cycle between Gheluvelt Park in Worcestershire to its namesake in Belgium, the site of a famous victory of the Worcestershire Regiment during World War I.

This follows a visit to the site by an expeditionary force of 8 Ambassadors in the Summer, which they described as a fascinating yet humbling experience. Though they were guided by WWI historians, the group felt that more could be done to commemorate the site, both to enliven knowledge of the battle itself and raise awareness for the achievements of the members of the Worcestershire Regiment, who overcame significant odds to defeat a greater German force.

The cyclists will arrive at Gheluvelt on October 31st 2020, to coincide with the unveiling of a new memorial.

On the 31st October 1914, a massive German attack, pushed in along the axis of the Menin Road to the east of Ypres, broke the British line at Gheluvelt. The enemy’s infantry, numbering 13 battalions, were set to overwhelm the depleted 5 British battalions holding the line. By noon on 31st October 1914, the Queens, the Royal Scots Fusiliers, the Welsh and the Kings Royal Rifles had been overwhelmed, while on the right the South Wales Borderers had been rolled back. Gheluvelt had been lost and a serious gap had been made in the British line. So serious was the situation that unless the gap could be closed, a breakthrough could not be avoided.

This situation had been foreseen and it was decided that the counterattack against the lost position should be made. Only the remnants of the 2nd Battalion, The Worcestershire Regiment, remained uncommitted.

The Worcesters, seven officers and 350 men strong, set off from the south-west corner of Polygon Wood, about one and a half kilometres from Gheluvelt. They marched in column of fours to a small belt of trees west of Polderhoek Chateau, where they left their packs and shook out into two lines fifty yards apart, with two companies in the first line and one in the second. The ground between them and the objective was clear and devoid of cover. Though the exact situation was unknown, smoke could be seen clearly rising from the village. 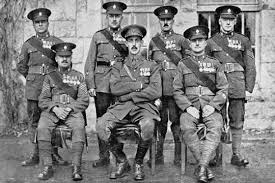 Survivors of the Worcestershire Regiment after the Battle of Gheluvelt 1914.

The first two hundred yards were crossed in one long rush; nevertheless, the Worcesters were set upon by enemy artillery. Over a hundred men fell, but the rest pressed on. The Germans were largely unprepared, revelling in their prior victory – their complacency led them blind to the possibility of this counterattack. In some bitter close-quarter fighting, The Worcesters expelled a far larger German force who offered no organised resistance and were soon fleeing back in confusion through the village. They re-occupied the empty British trenches across the main enemy axis. Gheluvelt had been saved and the line restored.

Of the 370 men who went into action, 198 were killed or wounded. Hankey’s 370 men had defeated the best part of a German infantry regiment, in circumstances where the ground favoured the defender. It is no exaggeration to say that they had preserved the integrity of I Corps and in doing so had averted the collapse of the British Expeditionary Force and the loss of the Channel Ports, with incalculable consequences for the war as a whole.

A launch event for the Gheluvelt 2 Gheluvelt project will be taking place from 5 pm, Thursday, October 31st at:

Full details can be found here.

The event seeks to outline the plan of action for the ride in 2020. Also present will be Lieutenant Colonel (Retired) Mark Jackson – OBE, who will be giving a brief history of the battle itself.

On the day, you will be able to purchase a figure and booklet pack for £20.00. 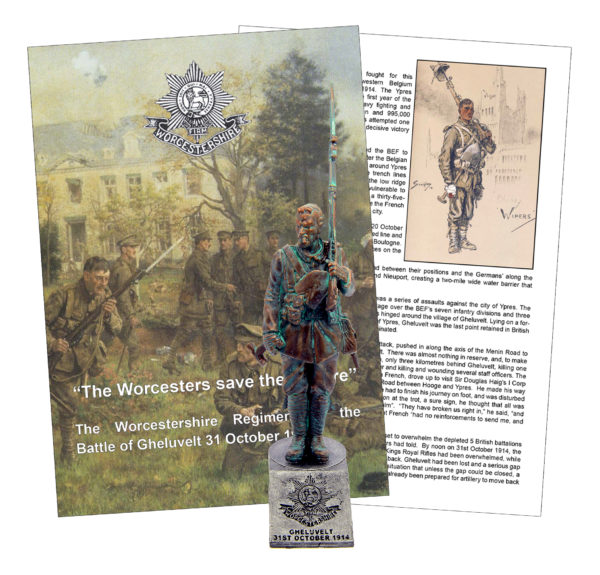 The specially commissioned figure is produced here at Warlord Games, depicting a proud soldier of the Worcestershire Regiment.