An absolute beast of a battle has just been sent in from the guys at Southend on Sea Wargames Group, we had to split it into 3 parts – enjoy the Operation Market Garden battle report.

I saw this awesome Market Garden themed Bolt Action Game from Southend on Sea Wargames; posted by Russell Wright with photos from Dean Bailey and Ian Day. I had to contact them to ask for more info….

They kindly sent me the write up below with some awesome images!

If you are running large themed games like this, feel free to send me an email with some cool action shots! 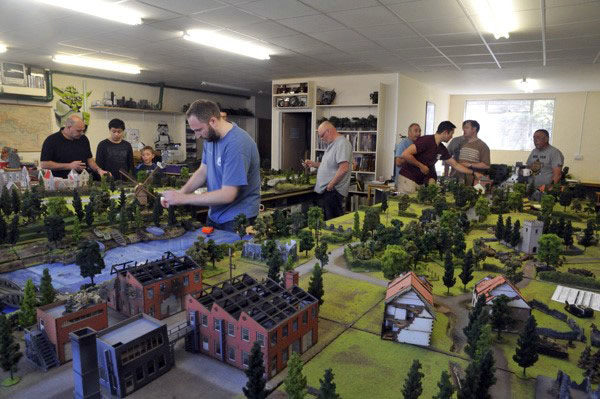 Southend on Sea Wargames Group (SSWG.co.uk) had spent several weeks setting up tables and scenery for a large-scale scenario on June 10th. The plan was to refight as much of Operation Market Garden as their tables would allow, which had been formed into a horseshoe shape with left and right sides dividend by the Waal River at Nijmegen. They had run a couple of test games to tweak the rules to ensure such a large game could be completed within 8 hours, with around 12 turns taken. This led them to use fourteen 6ft by 4ft boards with four bridges to secure, three urban conurbations to clear and Hells Highway which from board edge at the starting point to Arnhem bridge was 44 feet long (528 inches). 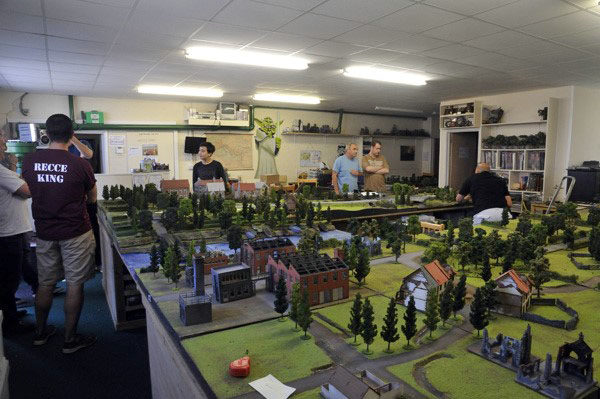 The battlefield pre-set-up as seen from North of Nijmegen and the Waal river. Arnhem lies to the right, out of sight, Grave is in the background far left corner.

Across this board would be ranged six Allied army formations manned by seven players facing off against six German formations each manned by one player. Most formations equated roughly to a Bolt Action platoon each, with on average twelve order dice. 30th Corps, with potentially 28 order dice, was managed in two columns by two players.

In total at game start (with the Polish Brigade yet to arrive and some German reinforcements not in place) the game started with around 240 Allied soldiers and 28 tanks/ armoured cars facing off against 180 German infantry and a dozen tanks and armoured cars. Eventually, 500 infantry and 60 AFVs would participate (plus lots of AT and AA).

The game was also interesting in that it completely ignored points costs and the army formations were based on what forces appeared during this campaign. For those of you interested though, SSWG estimate that with air strikes and transports etc included, the Allies had around 14,000 points against 10,500 for the Germans (their tanks are expensive!). 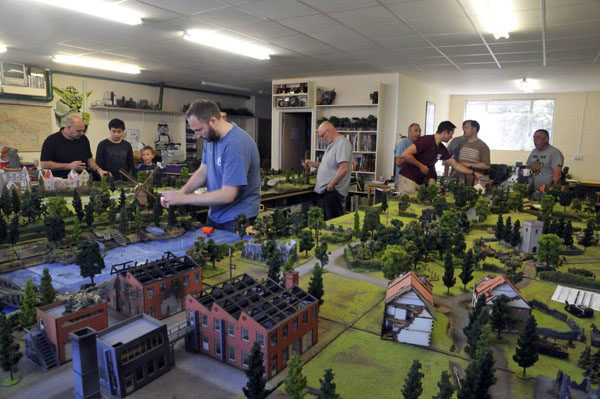 Arnhem visible to the north, a long way from 30th Corps.

The game had an umpire overseeing events, managing dice drawing, settling rules queries and keeping everyone to schedule. Set up begun from 9 am (with most formations prepared on trays the night before for deployment). The game began at 10 am and ended at 5 pm (with a lunch break taken at 12.30pm). This allowed for around six hours of playing time and SSWG had calculated (with test games) that they could average thirty minutes a turn. To achieve this rate of action, each side was allocated 42 order dice each (30th Corps players had a bonus 3 extra) in total, which was stuck in a big tub. The dice bag then received two or three dice for every player (depending on the size of their force for a total of c. 16 on each side) and every time a player had their dice drawn they got to use three order dice. This meant that not all units could be moved every turn as the order dice would run out, thus commanders would have to prioritise them. The Group also drew three dice for these players at a time, so that three players were active simultaneously, with the umpire ensuring this was one in each area of the tables to reduce overlap in actions.

Amongst the house rules for the game, the most notable change was transports. To reduce order dice being used and to stop players zooming empty transports all over the place, transports did not get an order dice and would only activate when they had passengers (similar in many ways to version one of Bolt Action). 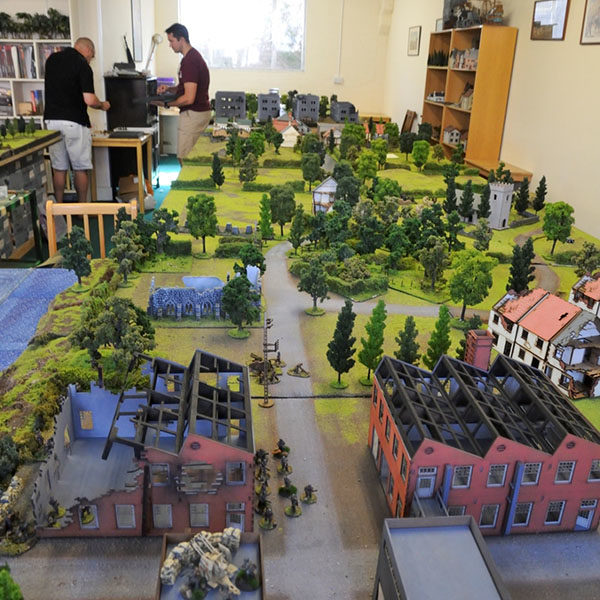 Even once the Waal was crossed, Nijmegen to Arnhem was going to be a long trip. Note the Quad cannon on the roof at the bottom of the photo which was to cause so many problems for the US Airborne.

The game naturally split into three main zones of activity, being the 30th Corps break out and actions south of and around Grave; the US airborne assault on Nijmegen and of course Arnhem itself. 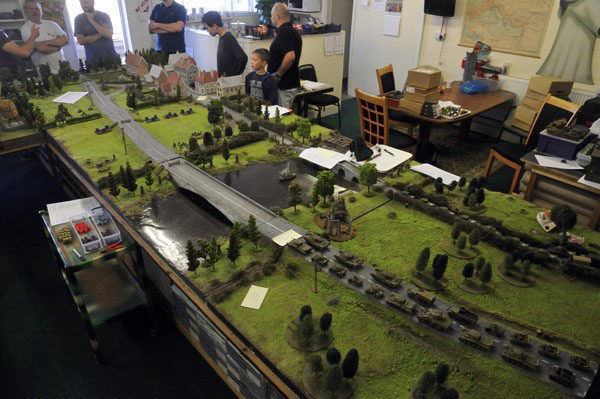 30th Corps on the starting grid. Hell’s highway to the left with country lanes on the right. Grave is to the north east, Nijmegen hidden on the left.

30th Corps was formed up of two columns on the main highway and the side roads into Grave. Each column consisted of 12 tanks with armoured car and infantry support in a mixture of trucks and universal carriers. A prep barrage was dropped onto the German defences on the Maas river and the armoured columns roared into life. Units were issued run orders and looked to cross the bridges before enemy firing could cause a snarl up. This proved effective on the first turn, with the barrage reducing enemy firing effectiveness. From turn two, selected elements of 30th Corps opened up on the enemy defensive line and the left column was able to punch through with German anti-tank fire surprisingly ineffective, as was their nebelwerfer. Once panzerfausts had been fired, German infantry was left to just watch the column racing past though a 20mm flak gun did good work of harassing the column throughout the game. By turn four the left column had reached the southern environs of Nijmegen but then came under fire from Pak 40’s hidden in woodland as well as a Stug which had taken up an ambush position in the town. 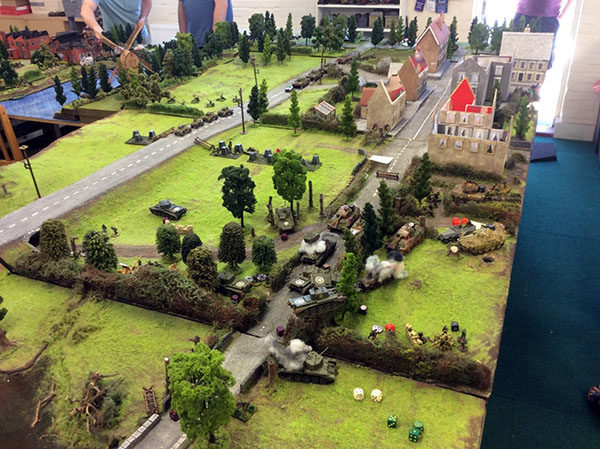 Hells Highway breakout with carnage in the lanes.

The AT positions had been able to set up thanks to the street fighting in Grave. 1st Fallschirmjager was involved in fierce street fighting with the 101st, with units firing across the street at each other from occupied buildings. 1st Fallschirmjager was able to bring up artillery support and started to put the hurt on the 101st who were also outnumbered having been given too many objectives. 101st found their forces split as they simultaneously tried to interfere with 88mm AT defences on the Maas (they were prevented in this by fire from a Wirbelwind), supported the Nijmegen Waal river assault and then had to clear forest lines of Pak 40 guns. However, the fierce fighting did contain the Fallschirmjager to Grave town and they were unable to seal off completely the highway to the west. 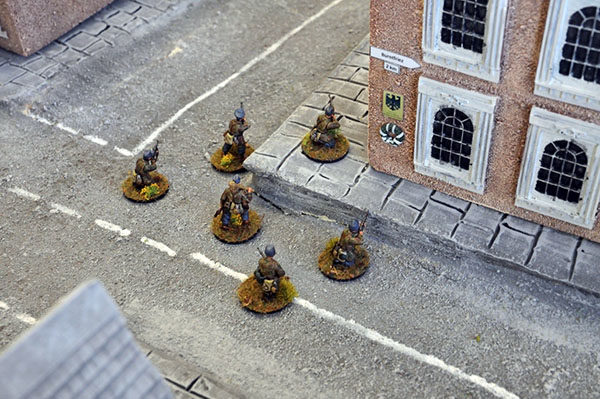 The right column of 30th Corps in the meantime had run into serious trouble. Despite AT defences proving ineffective (unlucky dice rolling) only around six tanks were across the Maas bridge before 3 Panthers with Panzer 107 plus AT guns on Hanomags engaged them. The narrow lane became clogged quickly in the fierce fighting. This was especially true after a Panther and Hanomag were both immobilised on the road ahead, effectively blocking it. 30th Corps lost seven tanks pinning down the enemy force here. They managed to get a firefly through to Grave but this was immediately destroyed by Fallschirmjager in cover with panzerfausts. Two Cromwell’s slipped across the fields (these can be seen sneaking off in the picture above) to the highway and were able to continue the advance, but the right lane advance had become a battle of attrition with the 107th. This did however prevent the Panthers from cutting off the highway. Just as a German breakout seemed possible (that would then have threatened the highway) an air strike was called in. This ground attack Typhoon caused enough mayhem that it allowed 30th Corps infantry (which had advanced in trucks) to, at great cost, to assault German infantry, then an 88 gun before closing in on a panther and taking it out with a Piat. German LMG fire and mortars made the country lanes deadly. From turn six all 30th corps reinforcements were directed up the highway with the right flank left to fend for itself. 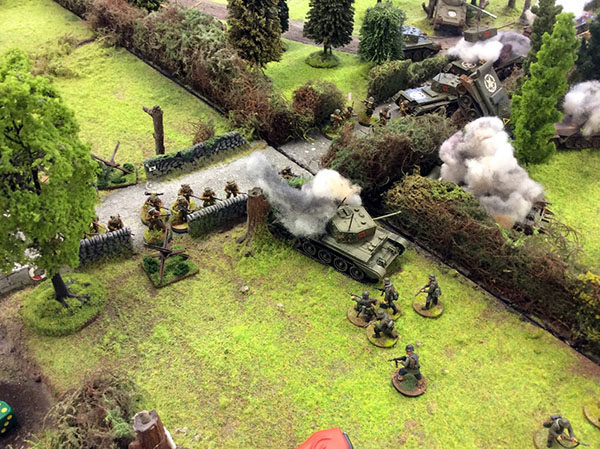 30th Corps infantry about to go “over the top” and clear out German defences.

30th Corps on the left were slowed down from turn four by having to deal with the Pak 40 ambush and fire from Grave. This delay was probably critical to the battle as 30th Corps for two turns used armoured cars and fire from Churchill tanks to suppress fire onto the columns. Realising time was now of the essence, the forces disengaged and started to race for the now open Nijmegen bridge. But this delay had surprisingly allowed two Cromwell’s from the right flank advance to reach the bridge first as they used the distraction caused by their comrades to race cross country to the bridge. These were able to begin crossing the bridge from turn seven, about two turns behind schedule by our count. 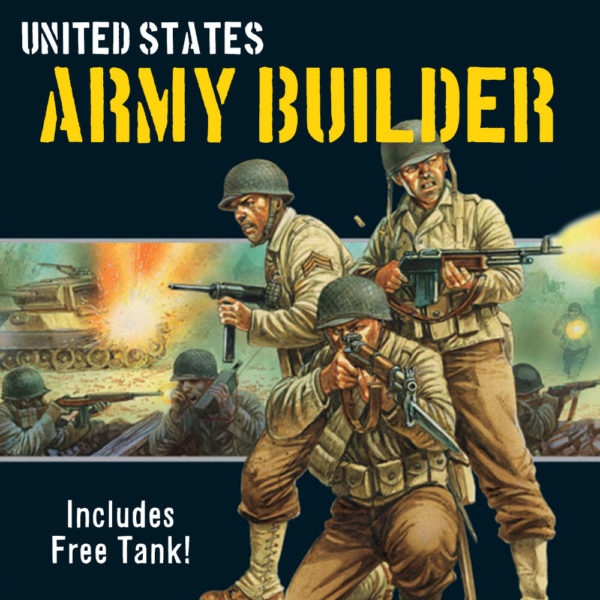 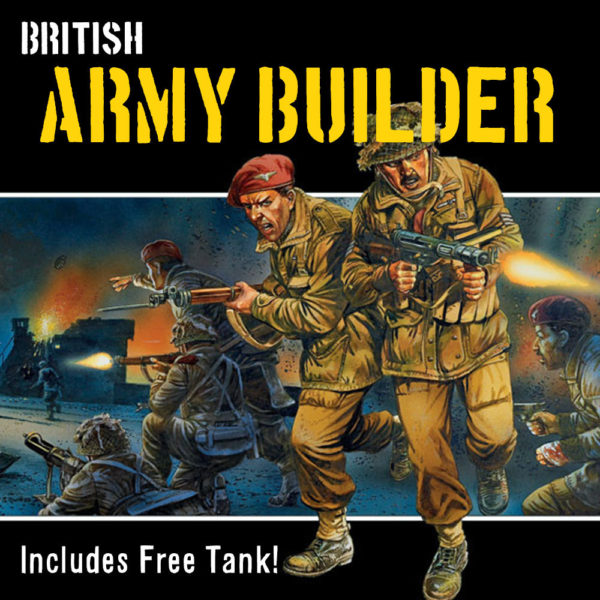