With last week’s launch of the ‘Battle for Xilos’ Online Campaign, the first Battle Reports have been coming through to Warlord HQ – the Drop Sites are ablaze – with battle lines constantly shifting, and mixed communications reporting the continual movement and tactical redeployment of forces between Drop Sites, as each faction attempts to gain a dominant foothold upon the planet…

Here are just a few of our favourites so far…

Boromite Guildess Arran Gestalin sent down a skirmish force to investigate the Planet Xilos and destroy the Ghar’s generator station. The Ghar knew we were coming and proceeded to shot down 7 out of 15 drop capsules. The failure to protect our classified information resulted in the death of several great Boromites which included the Boromite Overseer Squad, Lavamites, and a Work Gang Squad with a Vorpal charge. Those responsible will pay! 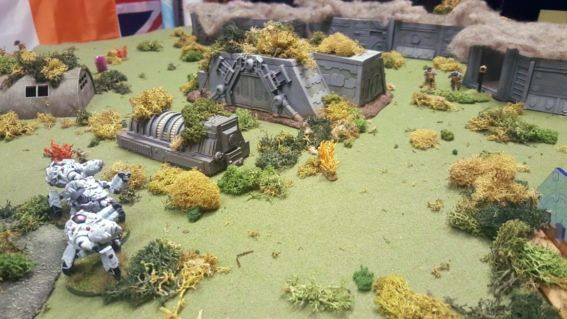 Despite these catastrophic losses it was determined that there was still a chance for victory. So, the remaining Boromites pressed forward with the assault.

Things turned around when a Boromite Work Gang with a Vorpal charge was able to sneak behind a Ghar battle squad that was trying to reinforce the Ghar defending the generator station. It came down to the” first order out of the bag” situation the following turn and despite the Ghar using a block on the first attempt the Boromites won the battle and immediately fired the vorpal change which killed the leader of the Ghar battle squad.

The Mass Compactors then followed up from short range and hit the remaining 2 Ghar suits with 4 hits. This resulted in a 10 being rolled on each Ghar battle suit, destroying the entire squad in the blink of an eye! 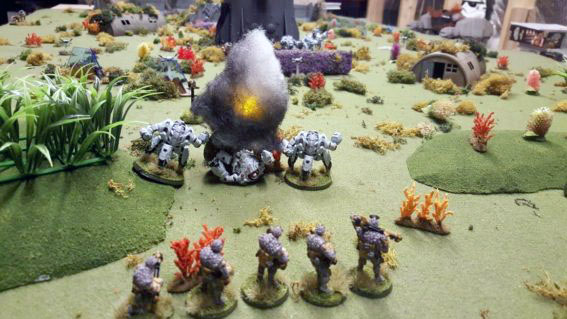 Later on when the Boromite plasma light support took out the Outcast Leader and its Cannon, the Boromites reached their peak – after which the Boromites were forced to retreat before the entire skirmish force was wiped off the planet Xilos. We will find the traitor among us.

A win for the Ghar

“Freeborn Varda Ipsimus, evading the Ghar defensive nets, initiated a landing over the polar region, establishing several of their own defensive positions before preparing to strike out at the primary land mass.

One small polar position came under attack by Algoryn landing forces, and a small force of Freeborn deployed to defend their gravity web generator.

After deploying defensive positions, an Algoryn drop capsule coming in hot forced a Vardanari squad and a support team to redeploy, taking down orders and unfortunately exposed positions. 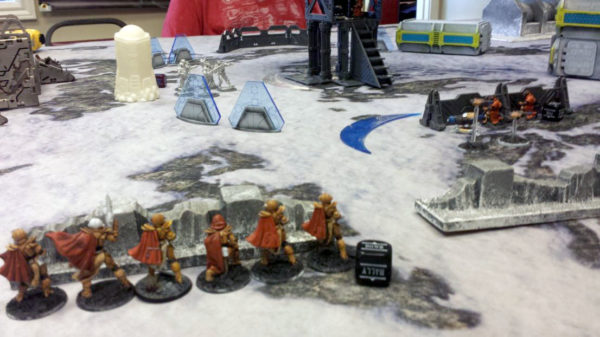 The squad deploying out of the capsule immediately assaulted the nearby generator tower, effectively overwhelming the single mag light support team defending it.

Both the Vardanari and remaining Support team failed their recovery tests, and remained down into the next turn.

This became a major problem as an Algoryn infiltrator squad deployed from the edge leaving the mag light support team totally exposed, and some bad rolls left the team without any serious firepower, but still alive.

A Domari team came on to the board and attempted to wipe out the assaulting Algoryn on the generator tower, pinning them with withering Mag Gun fire, but failing to stop their advance. They were quickly knocked down to half strength by return fire, forcing them to break and run.

A second Domari squad attempted the same feat, giving the Algoryn another pin but again failing to stop them as they advanced to the top of the tower and captured the generator for the Algoryn Prosperate, and opening a hole in the defensive network for the Prosperate to land their forces and establish a beachhead.”

A victory for the Algoryn

The Prequel game was the key to the glorious victory of the Ghar Empire – Zaesh started off very well, bringing all of tokens on the board, but lost faith in the subsequent turns. The Ghar commander was able to guess the correct movement of 5 of the 11 drop tokens – including 1 descent defence drone and 1support drone lander.

Only a single Strike Squad and a shard of Targeter Probes made it on the Battlefield in the first turn. One table edge was secured by the surviving support drone lander and a unit of weapon drones, and an interceptor squad were waiting off of the table. 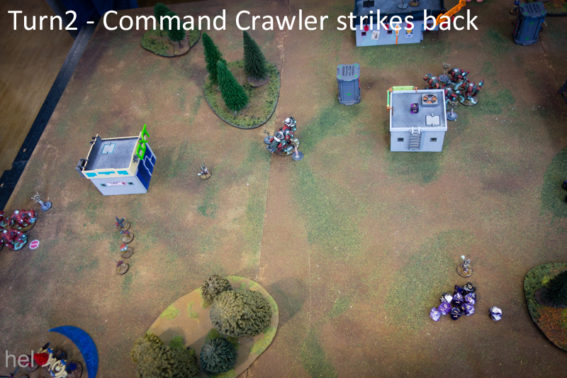 Some weapon drones approached on the corner of the table, and opened fire upon the Command Crawler , which subsequently shrugged-off all of the hits. His return fire proved deadly or at least “pinningly”, leaving the weapon drones with a malfunction and 6(!) pins.

The Battle Suits continued their advance towards the Strike Squad, which “decided” to stay down this turn. The Interceptors didn’t want to participate in the game this turn. 😉 On the other side of the table, the Ghar Assault Squad appeared, and opened fire upon the Concord Weapon Drones – inflicting little damage this turn.

To cut a long story short, the Battle Squad finished off the Strike Squad, and the point blank grenade rain of the approaching Assault Squad wiped out the weapon drones – breaking the Concord force.

A great game between two experienced gaming friends – but the disastrous prequel game proved too costly for the Concord, stacking the odds against them from the outset. A glorious victory none-the-less for the Ghar force!

A victory for the Ghar

Register now, and prepare for the drop… the battlefields of Xilos await!

‘The Battle for Xilos’ Online Campaign is now live! Register now, and begin your mission to conquer Xilos for your chance to colour future Antares lore…