An Afternoon with Mademoiselle Ney

With the gloomiest time of the year upon us I felt the need to reacquaint myself with some of my more distant relatives, as is only fitting in these darkest days, and so I chose to pay a visit to my late grandmother’s younger sister. Before you click the ‘back’ button in your browser: my grandmother’s name was Lea Ney, and her sister is Marcelle Ney. Yes, that Ney.

Maréchal Michel Ney has often been derided by historians of the Napoleonic period as a blood-crazed lunatic who cost Napoleon quite a few unnecessary losses, culminating of course in the stalemate of Quatre-Bras and the defeat at Waterloo. Others don rose-tinted spectacles and laud his great personal heroism, repeating the accolade of Bravest of the Brave which Napoleon unofficially bestowed upon him after the battle of Friedland, or otherwise his miraculous escape from envelopment at the Berezina river in the retreat from Moscow. Whichever way you choose to judge this fellow, you have to admit: ‘So-and-so Ney’ makes for an interesting name to possess!

Michel Ney was born a younger son of an Alsatian cooper in 1769 – a portentous year in which a certain Arthur Wellesley and Napoleon Buonaparte were also born. After a failed start in the ranks of the civil administrators (an interesting profession during his lifetime, as it turned out!) he enlisted in the hussars, but quickly clambered his way up the ranks. Never a political animal, he advanced himself in the typical hussar way through battlefield bravado and not a little luck. Created a Maréchal de l’Empire by Napoleon in 1804, he fought in a great many actions, usually leading from the front, and contributed to some notable French victories. 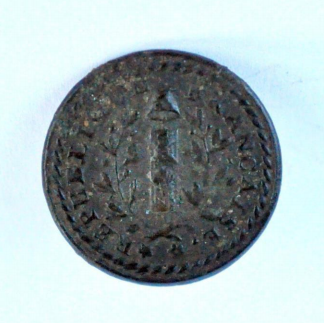 A button from a French divisional general’s coat, dated Boulogne 1792.
From the author’s personal collection.

Nevertheless, there were some less favourable episodes, such as his stint in the Peninsular campaign where he could not cooperate with French C-in-C Masséna and was removed from command. Still, his greatest moment was yet to come, and when in the retreat from Russia he extricated the rearguard of the battered Grande Armée from complete encirclement by Platov’s Russians, even a morose Napoleon was astounded at his return. Ney crossed the half-frozen Berezina river twice in pitch black darkness, constantly harried by cossack patrols, and was rumoured to be the last Frenchman to leave Russian soil.

Politics, however, caught up with Ney at Napoleon’s first abdication and, like many of his fellow marshals, he transformed himself into a devoted royalist. Upon Napoleon’s return from Elba, Ney vowed to bring the Emperor back to Paris in an iron cage, but was then forced to change sides once more when his troops defected en masse upon encountering Bonaparte’s swelling army. For this act of treason the royalists had him executed in the wake of Waterloo. After that final battle, he was slow – one might say even reluctant – to escape the grasping hands of the reinstated Bourbons. Here is a snippet from a contemporary political gazette:

The trial was a farcical affair, given that the ultraroyalist party wished to make an example of him. Even so, he remained a dashing and heroic fellow right until his execution by firing squad: he refused a blindfold and himself gave the order to fire. Thus ended his days, one hundred and ninety-nine years ago. 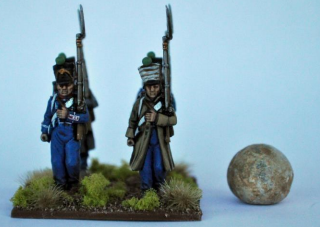 Ney was struck by several of these heavy musket balls; 28mm infantrymen shown for scale purposes.
From the author’s personal collection.

Now there’s a good death – but how about the tabletop? 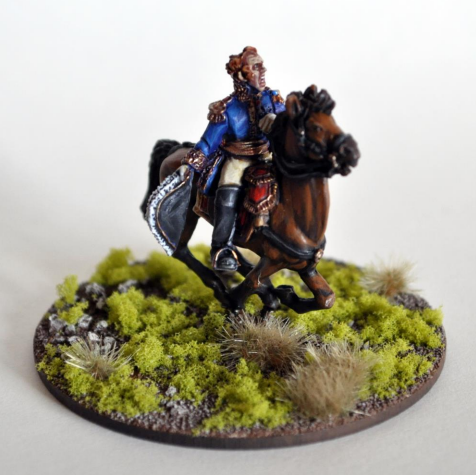 There are a few manufacturers selling miniatures of this fellow; in my opinion the best sculpt is the recent  one by Warlord Games. It might also be one of their best sculpts yet. I had the pleasure of painting their  Ney up, and carried it with me – together with a bottle of champagne and some sweet pastries – to meet  with Marcelle Ney and show her what sort of great hobby I’m involved in. Here’s how this ninety -year-old woman reacted to seeing the model: “I doubt I’ll see much, my eyesight isn’t that good anymore… hold on… That’s Maréchal Ney! I recognised him by his nose!” 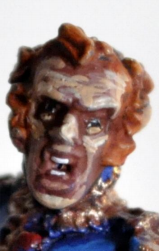 A close-up of the face, painted crudely by the author (his words, not ours!)

So if a ninety-year-old lady can identify the model by virtue of its conk, you can be sure your opponents will, too. What more reason do you need to acquire one of these Warlord sculpts for your own French collection? 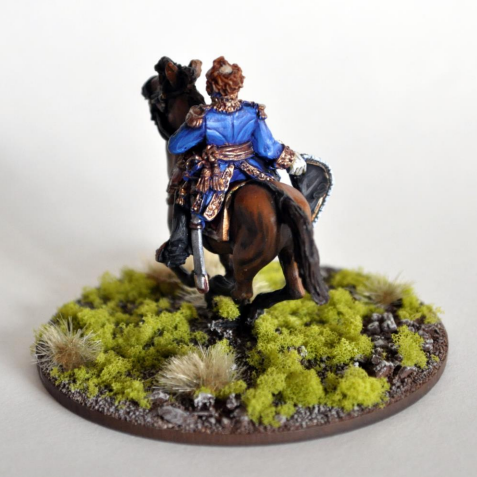 Quite a lot of Gold braid, as befits a Maréchal de l’Empire.

There is also a French Brigadier General included in the pack, shown below. I love how the general arches back, presumably to look back at his poor infantry dogsbodies as they slowly trudge through Belgian mud. 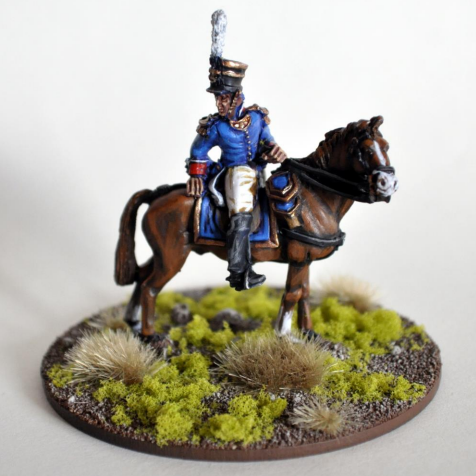 In games of Black Powder, a Marshall of the Empire in 28mm scale seems a bit overkill; Black Powder usually operates on a division versus division level with players each commanding a brigade or two. Leaving great command models such as these on your shelves would be a great crime, though, and Ney’s history is replete with instances of him taking direct command of divisions or brigades. Thankfully, Black Powder does a great job of providing a system which allows you to portray a commander’s psychological profile. While Warlord Games has already provided players with rules for Ney in Albion Triumphant volume 2, I would advise a further rule:

Battlefield Trauma: At the beginning of each command phase, roll a d3 and add 6. This is Ney’s command value for the turn.

Of course, feel free to tinker even further with the rules if you disagree with my interpretation.

However you decide to tackle the subject of this protagonist of the Napoleonic era, you won’t be disappointed by the wealth of interesting facts, both in his private life and in his military career. Line up your grognards and your thin red line on a table, bring out Ney and Wellington, and have another go at it, or as the French at Quatre-Bras said: “Ney contre Nez”; literally “Ney against nose”, a wordplay on Ney and a reference to Arthur Wellesley’s foremost facial feature. Godspeed, fellow wargamers!

Article written by Laurens Vannijvel, with accompanying photographs from his personal collection. 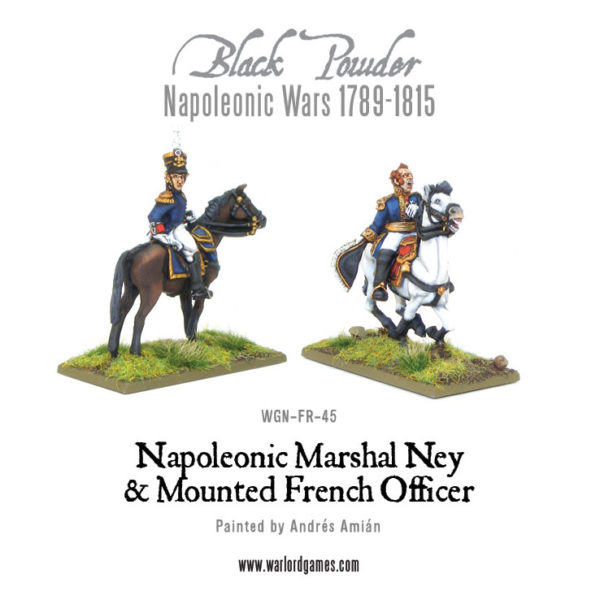 Don’t forget to pick-up a copy of the newly re-printed Black Powder Rulebook!