Kick Starter: The Escape of the King 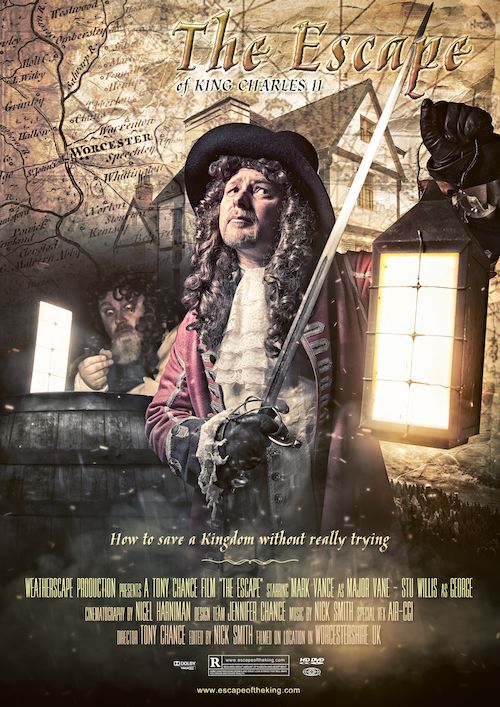 Our boss John’s been in full swashbuckling form of late and it turns out the reason behind these daring duels is down to a mate of his looking for backing on Kick Starter for a Swashbuckling Adventure Comedy Film. England 1651 – Two travelling opportunists unwittingly help fugitive King Charles II escape his enemies!

Writer, artist, and director Tony Chance has worked on many famous Hollywood feature films including Mission:Impossible, American Beauty, and X men 1st Class. Tony is now seeking your help to make the film that he has always wanted to make – THE ESCAPE ! (or how to save a kingdom without really trying)

Watch the full version of the promo…

It’s 1651, the young King Charles is on the run after the disastrous Battle of Worcester. Pursued by the forces of Oliver Cromwell, Charles is helped to escape by loyal subjects – and some who didn’t necessarily mean to help. For Cromwell’s militia, locating Charles is one problem, identifying him quite another.

“The objective we have, is to tell the truly dramatic stories that populate our history in an accurate, but entertaining and engaging way.”
The initial project is a 15 minute action packed scene from the feature length script written by Director and Artist Tony Chance. Of course, they’d love the budget to make the whole feature, but have decided to start with a more realistic target. Tony has written a key scene in the movie as a complete short film that introduces the main characters, and is packed full of sword fights, gags, and romance, with a history lesson thrown in for good measure.

If you fancy giving this your suport on Kick Starter, and depending on your pledge, you too could learn the craft of sword fighting! Or stay with the cast at the real & Historic location as the cast carry out a night shoot, and even appear as an Extra!

Be truly part of English history by taking part

View The Escape! in Kick Starter