Here we are focusing on the Limited Edition Fartok model which we will be giving away to everyone who pre-orders before the end of the day (6th November 2015) directly from Warlord Games.

What makes him so special? Well he is a main character for the Ghar in the Gates of Antares rulebook, and while an awesome battlesuit-wearing version will be available at some time soon, this unarmoured model is so limited that once the game is released he won’t be made available again! 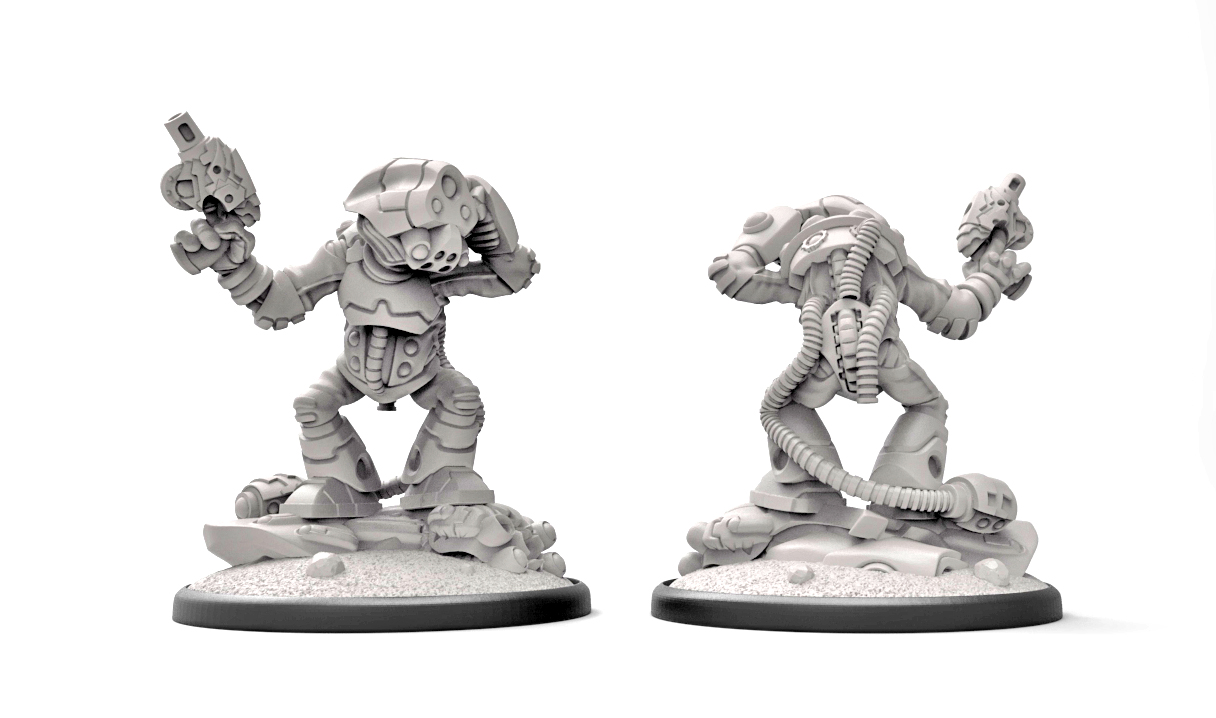 Fartok knew he had been hit hard – the retort of the shot echoed inside his battle armour like an exploding comet as he span out of control. The warning lights of his combat array blazed red and the stench of leaking plasma began to fill the tiny capsule. The armoured machine collapsed into a tangled heap on the ground. Seconds before he had been an invincible warrior of the Ghar: Fartok Commander of Battle Group Nine. Now he was a trapped inside the wreckage of his battle armour, held fast by a web of tangled feedlines and neuro-plugs.

Dizzy with pain he instinctively scrabbled for the emergency release catch beneath his harness, jerked it free from its housing and pulled with all his strength. The stricken machine wheezed uncertainly as pneumatic valves popped open and chemical propellants began to react with a reluctant fizz and a gurgle. And a bang! The explosion shot him and a chunk of his supporting harness straight out of the battle armour, tearing away the neural linkages through which the machine was controlled like a second skin. It was like being flayed alive and for an instant he was consumed by the unimaginable agony of it.

Fartok lay on the stony ground shivering, racked with pain such, as he had never thought possible. The world outside the battle suit was agonisingly bright and the noise of gun fire felt like a thousand hammer blows upon his senses. Everywhere there were Ghar machines lying broken and smouldering amongst pools of bubbling plasma. A few Ghar troopers were still standing, gallantly directing their Scourer cannons upon the enemy. But Fartok could see they were fighting a losing battle. Even as he watched another armoured suit exploded as the shot from an Algoryn Mag Cannon shattered the machine’s casing into a thousand pieces.

‘Curse those scum of Battle Group Ten!’ Fartok thought to himself once the pain began to subside and he came to his proper senses. His old rival and brood mate Karg, Commander of Battle Group Ten, had been responsible for reconnoitring the line of attack ahead of the assault. How could they possibly have failed to notice the build up in enemy forces? Surely Karg must have spotted the new Algoryn defences and seen the numerous emplacements. It was a death trap. Had Karg led him into a trap deliberately? It seemed more than likely Fartok thought with a sour grimace.

‘Commander… you are alive!’ squeeked a terrified Ghar voice from amongst the rubble. It was Drok one of the Battle Squad leaders. He had managed to escape too. His face was pale and he was covered in blood. The ragged remnants of his armour’s feed lines hung from his tattered pilots suit.

‘Yes Drok I am alive,’ he snarled, ‘ now let’s get out of here’. Fartok looked around but all he could see were Algoryn in every direction. They would be lucky to make it back to their own lines alive. But he had been lucky already. Lucky to have survived a fatal hit to his battle armour and luckier still that the clumsy escape mechanism had actually worked. In any case, he had to live, because one thing was for sure: someone was going to pay. And that someone was Karg!

This scenario has been designed to make use of the exclusive miniature, has been play-tested by the Warlord staff amidst a sea of cheers and our trademark poor dice rolling skills…

We hope that you enjoy it too! 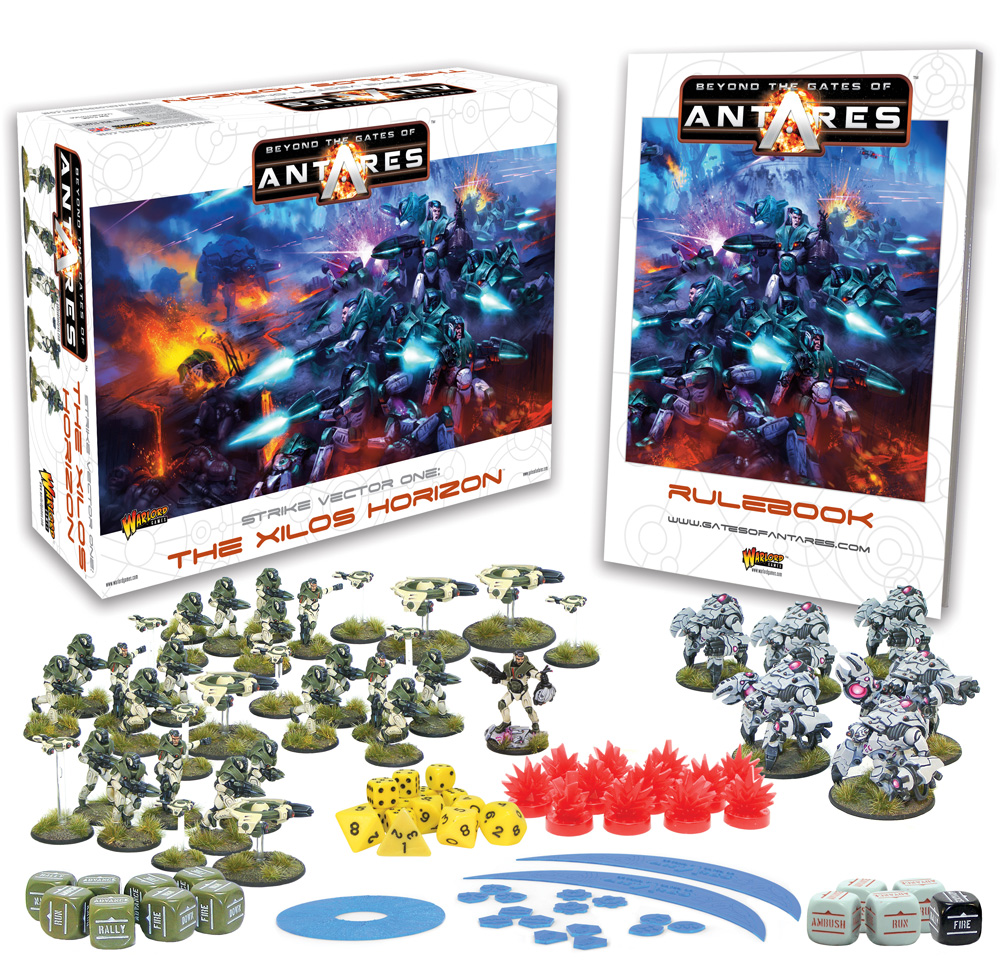 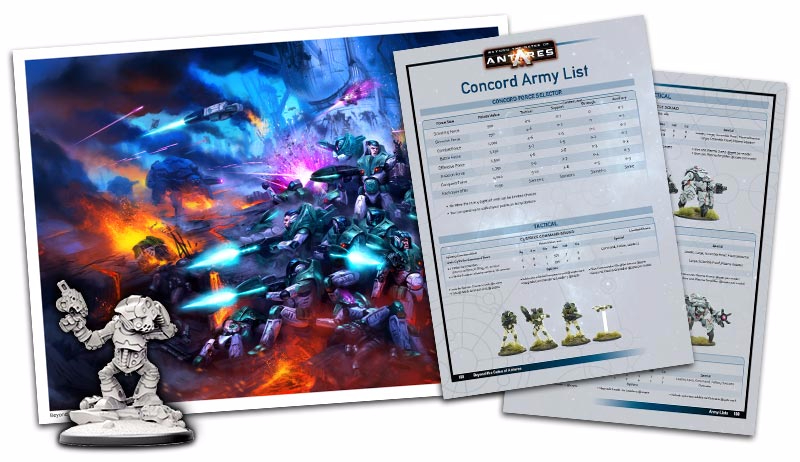 FREE GIFTS: When you pre-order (before the end of the day, Friday 6th November) directly from Warlord Games you will receive a personally signed art print of the box artwork from the game’s designer Rick Priestley, a PDF download of the Concord & Ghar army lists, and the limited edition model of Fartok, Veteran Leader of Battle Group Nine, Unarmoured. These items will only be available during pre-order.

When you order the Beyond the Gates of Antares starter set directly from Warlord Games you will qualify for free postage!