The emergency rescue ships – stealth lifeboats – had landed less than ten yan apart in the secluded valley. To Batu, their design spoke volumes of the Ma’req’s commitment to Algoryn principles, all angles and hard curves suggesting military practicality and function, even to the dull stealth coating overlaying their hull. Verak was already aboard the closest, checking out its systems with a surviving skimmer pilot; another scientist was overseeing pre-flight checks on the craft furthest away.

‘We’ve been lucky,’ said Ceahray. ‘The Ghar held back underground and it seems as if the dust hasn’t yet damaged the rescue craft. Stasis pods are all functional, too.’

‘How much independence do they have?’

‘The rescue craft? Minimal. They landed on automatic but there’s no point having an escape ship that can be taken over by an IMTel.’

‘Good point,’ said Batu. ‘That’s probably why they survived, though.’ He twisted his head. ‘Where are the other injured?’

‘Just inside the tunnel system. We’ll get you aboard and into a stasis pod first.’

Batu looked at her intently. There was something that bugged him about the way she refused to look at him. Or, at least, looks only at my face. I wonder…

An explosion and rattle of gunfire interrupted his thoughts. Ghar appeared over the nearest crest. Disruptor bombs erupted around them. Ceahray swore, shouted into her comm. ‘Get the injured out the tunnels, now. Get them aboard the ships. Pilots, get those pre-flights finished now! Light up and get ready to lift.’ She raised her mag repeater – one-handed, noted Batu – and aimed at the Ghar on the slopes. It clicked, dead. She threw it down, cursing. ‘Damn thing’s dead.’

Batu reached for his plasma pistol. ‘Take this. Better than nothing.’

Ceahray accepted it. ‘Sergeant, you’ll have to take him in to the ship.’

‘No, leave me to last. Baray’s carbine still works. We can cover the injured.’

Ceahray hesitated, made a decision. ‘Very well.’ She spoke into her mic. ‘I’ve reserved a pod for you both on the nearest rescue craft. Get in there as soon as you can – it will lift off last with my AI.’ She ran forward, waving nearby troopers to join her and strengthen the guards around the perimeter.

Serviles dragged the few survivors from the tunnels. Batu was horrified at the state they were in: all unconscious, all encrusted with the bionanospore growth. ‘Look at…’ He stopped as realisation dawned. ‘I’m like that, too, aren’t I Baray?’

She briefly glanced at the injured. ‘Not quite as bad, but yes.’

‘Up to your abdomen.’

‘Thanks, I think. Okay, drag me over to that rock. You can shelter behind it and help protect the scientists as they drag the injured into the lifeboats.’ 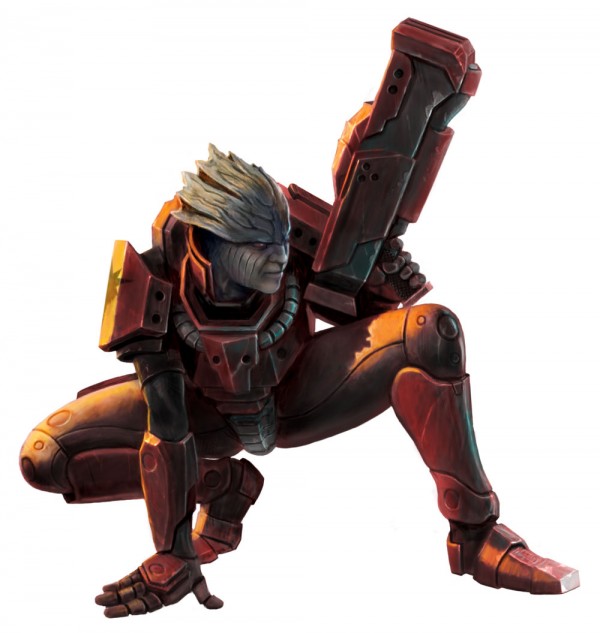 The plan had gone better than Shaltok could have hoped. On the surface, it seemed his ‘Sheep’ had remained in cover and reports suggested their primitive lugger guns were surviving the rigours of the dust remarkably well. Here, in the bewildering maze of tunnels, the humans had retreated before his meagre forces, firing a few shots and running as soon as a tectorist appeared.

Which is lucky, as few of our weapons are fully functional. Two suits had already exploded, bringing down some of the tunnel system, but the troopers had managed to escape. His own suit was now warning of numerous impending failures and even the warning systems on the plasma reactor had failed: he had a feeling that the reactor was giving off an uncomfortable amount of heat. Trouble is, I still need my combat array.

His display was updated with the latest transmissions. The overground force had engaged the humans as they tried to embark into their spacecraft. It seems they were hampered by their efforts to load unconscious survivors. Why not leave them? he puzzled. Saving half a dozen puts the rest at risk. But it was not his task to wonder, merely to carry out his orders to the best of his abilities.

Shaltok frowned as another transmission came in: the surviving bomber was failing, the Outcast Slavemaster had detailed two of his bodyguard to fix it. The bomb trooper was scathing in his criticism, regarding such meddling as futile. Shaltok despatched a quick reply: ‘Let them try – there’s nothing else you can do.’

One of the dismounted troopers gained his attention. ‘Sir, I think you ought to shed the suit.’

‘Understood, sir. However, I have information that might prove vital.’

‘Your battle armour is on fire.’

REBOOTING. Batu’s shard interface was trying one last time. He watched whilst Baray reached over the rock, fired pulses from her plasma carbine at the Ghar hiding in the entrance they had blasted to the tunnel system. ‘Grenades, Baray?’

‘Thought of that, sire. All inoperable.’ She continued firing, glanced towards the other lifeboat. ‘The injured are on; they’re closing up.’

Ceahray ran over, tapping at her mic. ‘Comms are gone. The other ship’s about to take off. Get on board.’ Her prosthetic arm was hanging uselessly by her side.

‘Only to the foot of the ramp. I’m not going onboard without Baray. In fact, let her take me.’

Ceahray stared at him quizzically, then saluted. ‘I had not expected such bravery.’ She ran towards the nearest craft, shouting at the few AI still able to fire.

‘I think she thought so, too. I’m curious – has this disruptor barrage been a little light?’

‘Yep. The big bomber gave up a few minutes ago. Scourer fire is pretty erratic, too. It’s just the luggers that are firing.’

‘Disruptors and luggers – both fairly primitive.’

‘Escaped from the ‘spores, you mean?’ She laid down a long pattern of suppression fire, grabbed his stretcher. ‘I wish you’d taken Ceahray’s offer.’

‘We’ll be fine. Give me the carbine: I’ll try and cover us.’

Baray dragged him across to the foot of the ramp as Batu tried to lay down some form of protective fire from his stretcher. He had no idea if he was being effective or not. From behind him came the bass rumble of heavy suspensors activating, then the whine of engines kicking in. ‘Is that the other ship?’

‘Yep. It’s taking fire.’ There was the flare of sickly blue light, an ear-splitting explosion and intense heat. ‘No!’ Baray stopped, held the sights of her carbine up to better see what had happened.

‘It looks like the Ghar bomber’s been partially dismantled. Outcasts have its weapon on the legs of a Ghar battle suit. They’ve built a heavy weapons tripod mount.’

‘Down. They’re trying to reload. We’d better get moving. We’re the last and Ceahray’s on the ramp.’ She bent over, dragged him across the gravel and dust.

‘No one else is on the planet?’

‘No, sire.’ Baray was panting with effort.

‘Stop.’ He queried the shard interface. ’MyShard: Can you query the local ‘sphere?’

‘See if the name of the planet was Shamasai.’

‘MyShard, shut down. I’ll have your interfaces replaced.’

‘That is no longer possible. The bionanocytes have fused with synaptic system connectors.’

‘We’re almost at the ramp. Ceahray’s at the controls.’

‘Just stop!’ Batu threw away the plasma carbine, reached down to touch the ground. The twisting caused screaming lances of pain up his back. ‘MyShard, record this. As the sole human representative of Doma Familia status on this abandoned planet I claim it for the Vardos Delhren. Preliminary local name is Delhren VI, formerly Shamasai.’ He grabbed a handful of pebbles, slipped them into the water bottle. ‘Sample proof collected and placed into distilled water. End Recording.’ He lay back, exhausted. ‘Now we can get onboard, Baray. And let’s hope that bomber doesn’t fire again.’

Shaltok clambered over the rocks at the entrance to the tunnel system. He watched as the human craft lifted and shot into the air. A single disruptor bomb burst in the air behind it but was too far away to do any damage. Across the valley another of the curious craft was in ruins, parts burning fiercely, dense black smoke pouring into the air.

There was nothing left but Ghar. Success. He allowed relief to flood his muscles and sat down, suddenly tired. ‘Tectorist, find a functioning communications relay. Signal the transport that humans have been driven from the planet. It is ours; we have achieved success.’

‘Sir.’ The tectorist made to move.

‘Wait. Make sure that the landers only drop down rappelling lines and do not land on the surface. The planet is unsuitable for long-term deployment of Ghar technology.’ He looked round at the world he had just claimed. In the distance dust swirled in the gentle wind, perhaps another storm brewing. ‘And demand they evacuate us before another storm comes.’

It was a desolate world, a Ghar world. One he could claim to have conquered himself. That it was useless in the Empire’s fight against the human scourge was a mere technicality.

His promotion to Force Commander was assured. 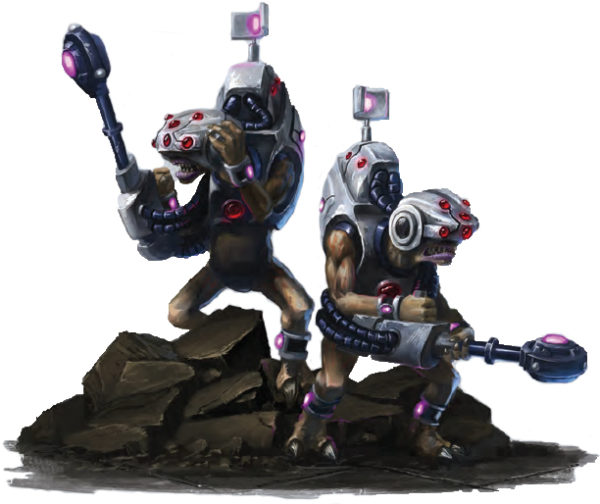