One of the big highlights of our Open Day this year was this fantastic recreation of the battle of Auldearn in 1645 that we put together in collaboration with the Friends of General Haig. This week, we’re taking a more in-depth look at this beautiful table. 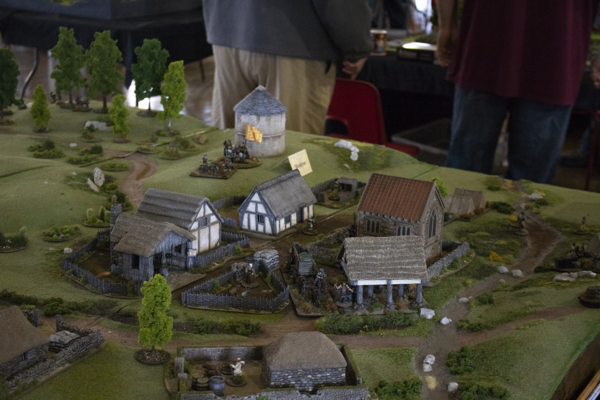 In May 1645 the Marquis of Montrose, King Charles’ appointed Lord Lieutenant of Scotland, led a small, disparate Royalist army against the armies of the Scottish Parliament, known as the Covenanters.   The campaign in the spring of 1645 had been characterised by Montrose marching through the highlands of East and Central Scotland to recruit more men under the King’s banner, while at the same time avoiding the Covenanting forces sent against him.

In April the main Covenanting army had split into two parts, and Montrose skilfully avoided the larger part of the enemy forces and marched after the smaller force which was led by Sir John Hurry.  Montrose gathered enough men to give him a local superiority in numbers against Hurry who, well aware of the situation, was similarly gathering the forces of local Covenanting lairds to turn the tables on Montrose. 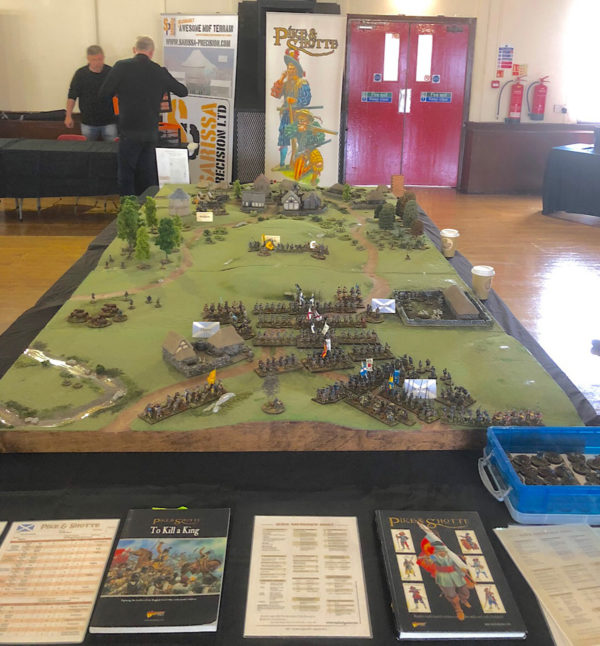 Hurry was marching west along the coast of the Moray Firth towards Inverness where his new reserves were gathering.  Hurry was almost caught by Montrose at Forbes, but Hurry managed to escape toward Inverness.  Montrose halted his pursuit at the village of Auldearn, expecting Hurry to regroup under the walls of Inverness.  However, Hurry had no such intention.  Hurry had ordered the garrison of Inverness, and his newly levied force, to meet him on the road.  As soon as he was reinforced Hurry turned around, hoping to surprise and crush Montrose. 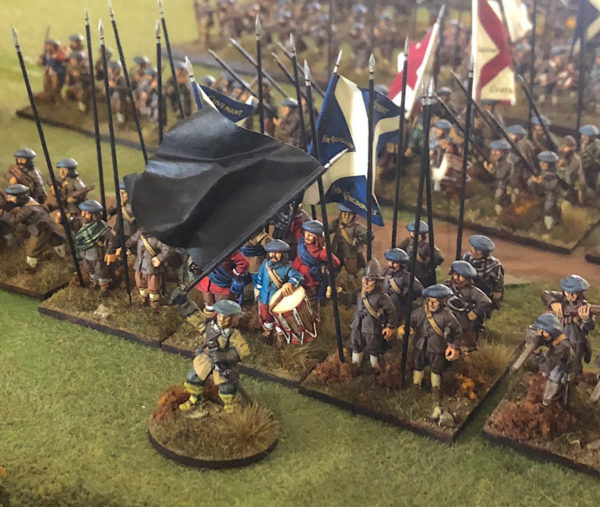 Hurry’s troops marched through the night of the 8th May.  It was a foul, rainy night, even by the standards of a Scottish spring.  Montrose’s force was quartered around Auldearn, most men probably trying to find a dry spot to sleep after their wearisome marching.

Fortunately for the Royalists, shortly before dawn, Alasdair MacColla who commanded the Royalist Irish Brigade, sent out scouts toward Inverness. The scouts had not advanced very far from Auldearn when they heard musket fire.  Hurry had halted his troops and ordered them to clear their rain-soaked muskets by firing them, before falling on the Royalists. The scouts scampered back to Auldearn and raised the alarm.  MacColla was able to gather together a scratch force of his own lifeguard, and some Gordon foot, to try and slow down Hurry’s Covenanters while the rest of the Royalists roused and organised themselves. 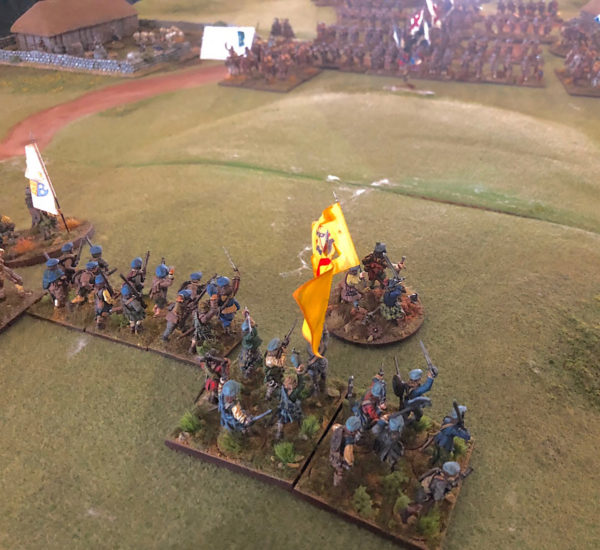 So, the scene is set for a tense and finely balanced engagement.  Hurry needs to deal quickly with MacColla’s delaying force so that he can storm the Royalist camp, and snuff-out once and for all King Charles’ hopes in Scotland. Meanwhile, MacColla needs to hold off Hurry long enough for Montrose to rally the remaining Royalists, and counter-attack.

The Auldearn battlefield is part of Warlord boss John Stallard’s extensive collection and was commissioned as he is particularly interested in the battle, and the period in general. It covers the village and surrounding the area, including the hill on which MacColla makes his heroic stand. 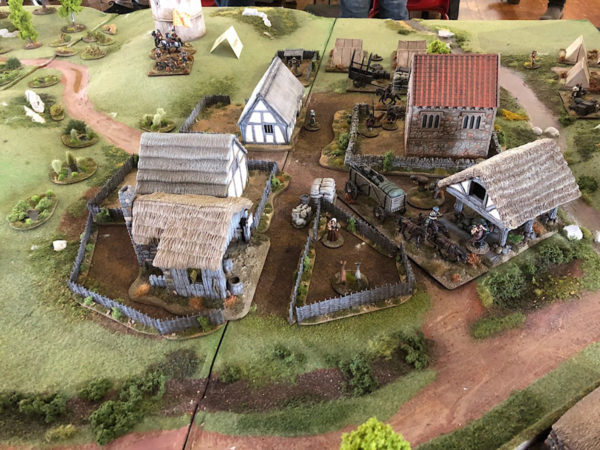 The figures were provided by the Friends of General Haig, a collection that had been amassed over several years. Originally Andy Bartlett had intended his Royalists and Covenanters to settle their scores on the Inverlochy battlefield, but when John showed off his fantastic table, it moved northward to cover Auldearn instead. 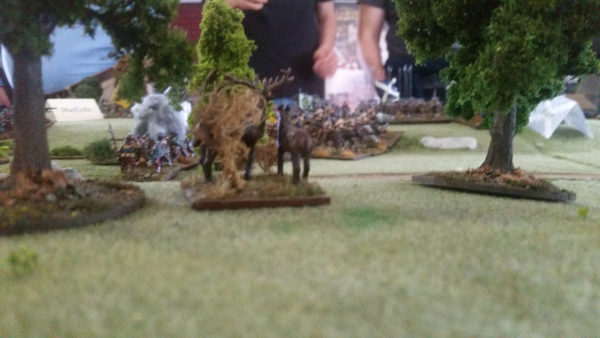 The miniatures themselves are mostly from our gorgeous Pike & Shotte range, supplemented with additions from Perry Miniatures and Wargames Foundry. 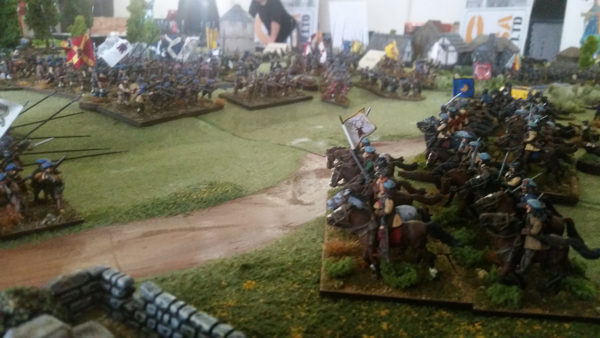 The table was crammed full of unique and characterful details, from Highland Cattle meandering across the flocked pasture to a carter hauling baggage through the village, while Montrose’s reinforcements dash to the front lines. 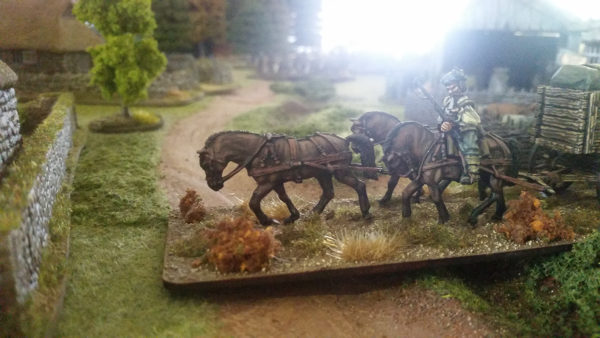 Getting Started with Pike & Shotte

Inspired by the Friends of General Haig and want to re-fight Montrose’s campaigns across Scotland? Pick up one of our fantastic starter battalia sets, which contains a whopping 114 plastic miniatures. This is the perfect starting point for getting into the game. 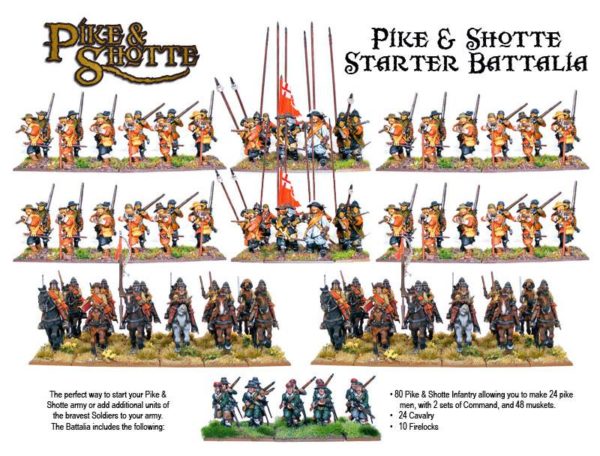 Tom spends most of his time buying books and painting miniatures. He enjoys putting animals on the bases of his miniatures and half-finishing side projects. Some say that he lives in a tower on top of some windswept northern hill with his wife and cow-patterned cat, Spaghetti.
View Profile | View all posts by Tom Mecredy
Spotlight: The Kangaroo Armoured Personnel Carrier
Black Powder 2: The French-Indian War