Carlos Ezquerra was born in Zaragoza, Aragon. He began his career as an artist drawing western comics and war stories in Spain. In the early ‘70s, he was brought in to writing British comics by his agent Barry Corker. He drew for romance titles such as Valentine and Mirabelle. He also continued to work on western comics for Pocket Western Library. 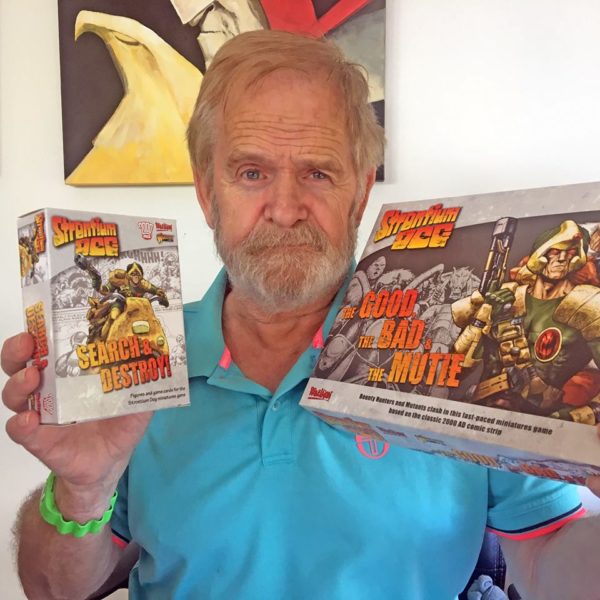 Eventually, given that the UK was a big market for Spanish artists, Ezquerra moved to Croydon, London with his wife. He then began to work on IPC’s Battle Picture Weekly.

After this, he was asked to visualise Judge Dredd, an ultra-violent cop series set in the future by John Wagner, in development at 2000 AD. The costume design of Dredd was partly inspired by fascist iconography from Franco’s Spain. His drawings and designs for the futuristic architecture and hardware inspired editor Pat Mills to push the setting much further into the future than originally intended.

Ezquerra drew many early strips and was upset at not being the series only artist. He was also upset that the first strip had been drawn by Mike McHahon in a style resembling his own. He then left the strip to work for Battle and created new characters with Alan Hebden, such as El Mastizo, a black bounty hunter working during the American Civil War.

It was in 1978 that Ezquerra and Wagner created Strontium Dog, a sci-fi western, focusing on Johnny Alpha, a bounty hunter in a radioactive future in which mutants are second class citizens forced to do the only job they can working for the Search/Destroy Agency. This was initially published in Starlord, the short-lived sister title to 2000 AD. Later, however, the two were merged. Ezquerra remained almost the only artist to draw the Character, until 1988 when Alan Grant decided to kill Johnny off in an arc called The Final Solution. Ezquerra strongly disagreed with this decision and refused to draw the story, which would go on to be illustrated by Simon Harrison and Colin MacNeil.

It wasn’t until 2000 that Wagner and Ezquerra would revive Strontium Dog. This was based on a treatment Wagner had written for a television pilot which was never made. The stories were set before the death of Johnny Alpha, but in 2010 story The Life and Death of Johnny Alpha, the continuity was revised and Alpha was brought back from the dead.

Ezquerra passed away following a lung cancer diagnosis in 2018. His work on Judge Dredd and Strontium Dog is celebrated as being a significant touchstone in comic book history.

Strontium Dog provided the basis of Warlord Games new 2000 AD range. The writer of this game, Andy Chambers, is a huge fan of Ezquerra, and had this to say following his passing:
It’s with great sadness that we hear of the passing of legendary artist Carlos Ezquerra. For many of us here at Warlord Carlos’ art was the very definition of sci-fi in a whole new style from the 1980’s to the present day. Through the pages of 2000AD he opened our eyes to a whole new galaxy of mutants, aliens, weapons, vehicles and architecture with rounded, organic styles and bold colours that was the very antithesis of everything we’d seen before. It was an absolute honour to render his designs into three dimensions for tabletop gaming in Strontium Dog and many times in making that game we asked ourselves whether our miniatures, layouts, and even the rules we were making were being as ‘Ezquerra’ as possible. His imagery and imagination will be sorely missed. Thank you Carlos, for everything.
0