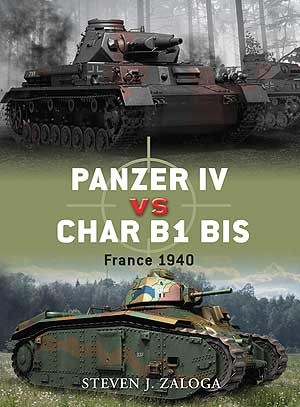 The Battle of France in 1940 involved the first large-scale tank-against-tank battles in history. The massive clashes at Stonne, Hannant, and Gembloux involved hundreds of tanks on both sides, yet have faded from memory due to the enourmity of the French defeat. This book examines two of the premier opposing tanks of the Wehrmacht and the French Army, the German PzKpfw IV and the French Char B1 bis. With a complete history of the design, development, and deployment of these armoured fighting vehicles, the story of these great battles is once again brought to life.

Steven J. Zaloga received his BA in history from Union College and his MA from Columbia University. He has worked as an analyst in the aerospace industry for over two decades, covering missile systems and the international arms trade, and has served with the Institute for Defense Analyses, a federal think-tank. He is the author of numerous books on military technology and military history, with an accent on the US Army in World War II as well as Russia and the former Soviet Union.Richard Chasemore finished a four-year course in technical illustration in 1992. Since then he has worked on a huge variety of projects in publishing and advertising, using both traditional and digital media. He has run an airbrush course in St Louis, Missouri, and also written six educational books on digital art. He has spent 10 years working on the best-selling Star Wars Incredible Cross Sections series, which has taken him to Skywalker Ranch in California to work with the Lucasfilm concept artists. He also enjoys music and is a co-founder of Superglider Records.