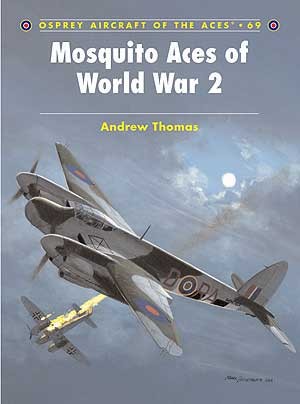 The Mosquito developed into one of the most versatile aircraft of World War 2, entering service with Fighter Command in early 1942. The ‘Mossie’ was soon defending raids on Britain’s Cathedral cities and became an integral part of the country’s night defences. Its airborne radar gave it the ability to ‘see’ the enemy at night, and its speed and devastating firepower made it the finest nightfighter deployed by any side during World War 2. This book examines the infamous Mosquito, the nightfighter that was used by many leading RAF, Commonwealth and American aces.

Andrew Thomas is a long established author on RAF history, having published numerous articles and books on the subject, as well as readily assisting other authors. Since joining the RAF, he has maintained his enthusiastic interest in the history and development of his Service throughout his career. He has previously published volumes on Gladiator, Tomahawk/Kittyhawk and Hurricane aces in this series. He lives in Lincolnshire, UK. Chris Davey has become Osprey’s principal illustrator of RAF aircraft, having produced the profiles for over a dozen books since 1994. His most recent work includes Aircraft of the Aces 38: ‘Tomahawk and Kittyhawk Aces of the RAF and Commonwealth’ and Combat Aircraft 31: ‘Lancaster Squadrons 1942-43′. He is particularly adept at ‘big’ aircraft like the Halifax and Sunderland. He is based in Nottinghamshire, UK.