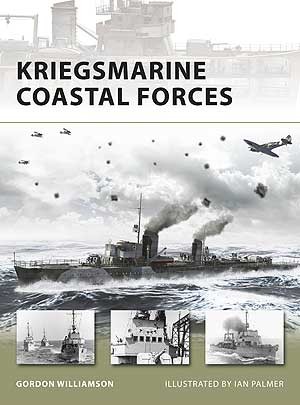 Although often overlooked in favour of the U-boats or battleships, the vast majority of the Kriegsmarine was formed of the smaller vessels of the coastal forces. These ships and boats, which included minesweepers, torpedo boats, patrol boats, and blockade breakers, gave crucial service to Germany during the war, and many continued serving for decades after the surrender in such tasks as clearing minefields. Also included in these forces was Hitler’s yacht, the Ostwind. This book reveals the history of the vessels that formed the backbone of the Kriegsmarine, and combines fascinating anecdotes, detailed technical information, and full-colour artwork.

Gordon Williamson was born in 1951 and currently works for the Scottish Land Register. He spent seven years with the Military Police TA and has published a number of books and articles on the decorations of the Third Reich and their recipients. He is the author of a number of World War II titles for Osprey.

Introduction Minensuchboote (minesweepers) Torpedoboote (torpedo boats) – small destroyers armed with two sets of torpedo tubes and similar to the Allied destroyer escort Raumboote – trawlers pressed into military service which were literally “outpost” vessels perfoming a patrol service and giving early warning of the approach of enemy forces Tenders: “Mothership” vessels for flotillas of smaller vessels such as E-boats and U-boats Tankers and auxiliaries – provided crucial refuelling facilities to U-boats. Most were hunted down and destroyed during the course of the war Blockage breakers Miscellaneous – including former cruise liners acting as troopships. The Wilhelm Gustlov was sunk in the Baltic by a Soviet submarine carrying thousands of passengers including women and children fleeing the approaching Red Army. It was the greatest single loss of life in a maritime disaster yet few people have heard of the ship. Also training ships and Hitler’s personal yacht, which was in fact a large steam powered vessel.