Last Stand of the ‘Glorious Glosters’ 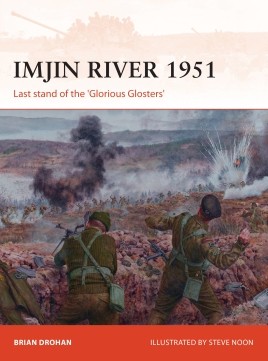 After China’s November 1950 intervention in the war and the subsequent battle of the Chosin Reservoir, UN forces faced a new onslaught in the spring of 1951 with over 350,000 veteran troops attacking along the Imjin River. The US 3rd Infantry Division took the brunt of the attack along with the attached British 29th Infantry Brigade which included the Gloucestershire Regiment (the “Glosters”). The heroic defence of the American and British forces would pass into legend, most especially the doomed effort of the Glosters, as they sought to buy time for the rest of the UN forces to regroup and organise an effective defence of Seoul, the South Korean capital city. Featuring full colour commissioned artwork, maps and first-hand accounts, this is the compelling story of one of the most epic clashes of the Korean War.

Brian Drohan is a Major in the US Army. He has served as a strategic planner with Eighth Army in South Korea, taught history at the US Military Academy – West Point, worked at the US Embassy to Sri Lanka, and led an armored platoon with the 1st Infantry Division during the Iraq War. He holds a PhD in history from the University of North Carolina at Chapel Hill and is author of the book Brutality in an Age of Human Rights: Activism and Counterinsurgency at the End of the British Empire.

Steve Noon was born in Kent, UK, and attended art college in Cornwall. He’s had a life-long passion for illustration, and since 1985 has worked as a professional artist. He has provided award-winning illustrations for the publishers Dorling Kindersley, where his interest in historical illustration began. Steve has illustrated over 30 books for Osprey.