These miniatures are ideal for refighting games set during 1804-1807. Great battles such as Austerlitz in 1805, Jena and Auerstadt in 1806, Eylau and Friedland, are now within your grasp!

In 1804 Napoleon declared himself Emperor of the French. This ignited a new wave of conflict throughout Europe, which only ended with Napoleon’s defeat at Waterloo in 1815.

The French infantry from 1804 to 1807 fought a series of arduous but victorious campaigns. They trounced the Russians and Austrians at the battle of Austerlitz in 1805, and humbled the mighty Prussians at the joint battles of Jena and Auerstadt in 1806. Advancing into Poland they fought the Russians to a bloody draw on the snowy fields of Eylau, before forcing them to sue for peace after the great French victory at Friedland. 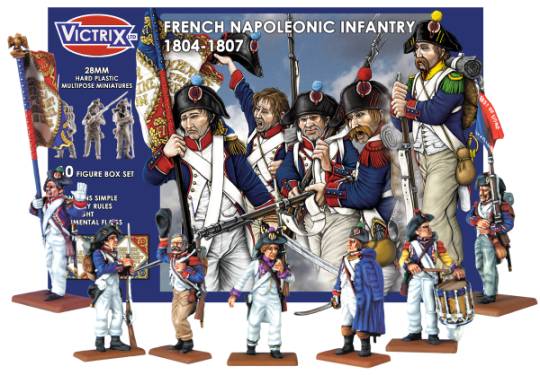 Fusiliers were the main bulk of the battalion. They could march hard and fast and live off the land giving Napoleon a decided advantage over his more plodding enemies. They would advance in column and expand into line to fire when within musket range, or just force their way through in a dense block.

Voltigeurs were the light company of the Battalion and were created in 1804 to add flexibility . They served as skirmishers for the battalion and swarmed forward of the attacking column to thin the ranks of the opposing firing line and pick off officers and sergeants with well-aimed musketry.

Grenadiers were the elite of the Regiment. They were big men and chosen for their bravery. They were used as a reserve to tip the balance when needed or storm enemy positions ahead of the main body. They were also sometimes brigaded together with other Grenadier companies to form Grenadier Battalions.

Infantrymen of this time wore a long-tailed blue coat with red cuffs and collar. They wore a Bicorne hat until 1807 when it was due to have been replaced by the shako. This, however, as with most army regulations took time to implement, some regiments only finally receiving their shakos in 1809.

In 1806 the white uniform of the Bourbons was reintroduced, but hastily the order was reversed by Napoleon in 1807 after his alleged disgust at blood-stained uniforms at the battle of Eylau. However it was only in 1809 that the last of the white uniforms were withdrawn from service. 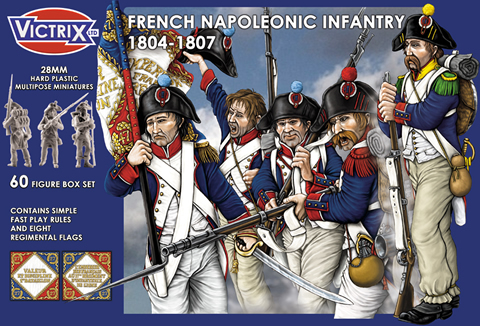 This boxed set contains 60 figures including Fusiliers, Voltigeurs, Grenadiers and Command. It is based on Victrix’s earlier French set but has some significant differences. As well as the new bicorne heads it also contains new Grenadier bearskins without cords or plumes to give an authentic ‘on campaign’ look to the figures. Also included are new arms carrying Porte fanons and waving bicornes.

There are dozens of separate arm options, separate heads and other pieces that will allow for hundreds of figure variations. There are various other components such as pistol hands, pistol buckets, officer coats that will allow for endless conversions and adaptations of the figures. Purchase yours today in the Warlord webstore!