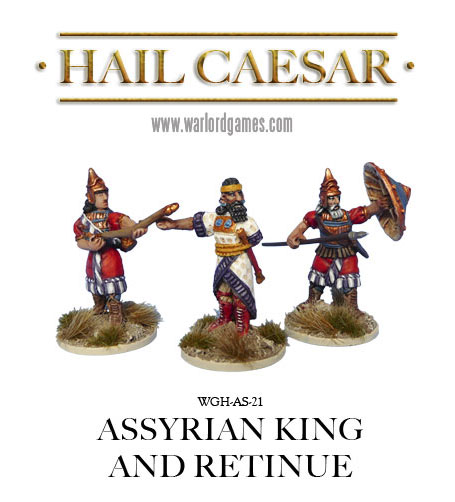 The king would often be present when his army went to war, some actively took part in the fighting. It is thought that Sargon died in battle against the Cimmerians.

The king is wearing the costume depicted in Ashurbanipal’s lion hunt. This is highly decorated and split for riding. The tiara is omitted, perhaps for practical reasons. White was a colour of divinity, the purple trimming and saffron dyed belt and headband represents the height of luxury and power, as does the gold armbands and chest plate with its lapis lazuli decoration the large ear rings are also made from this precious stone. Apparently the kings scabbard for his sword was even carved from a single ruby!

Kings were often accompanied by eunuchs as retainers, as they had no desire for assassination. This retainer carries a richly decorated bow, which he hands to the king. He carries a golden quiver on his back. The shield bearer is perhaps an old trusted companion, he guards the king with his life, warding off enemy missile fire. Both retainers wear longer tunics than standard and wear highly polished bronze armour.  Their clothing is trimmed in purple and white, showing the kings favour.