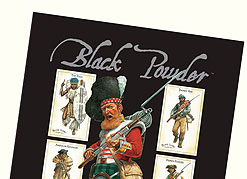 Black Powder is a game for the militarily inclined gentlemen with straight backs, bristling beards and rheumy eyes that have seen a thing or two. If tales of battle and glory in days-gone-by stir nothing in your breast, if the roar of cannon does not quicken the pulse and set fire in the belly, then this is not the rule set for you.

Set during the horse & musket period of 1700-1900, Black Powder is very much a game for gentlemen gamers. Gamers who cherish the finer things in life such as wonderfully painted armies, fighting over luxurious terrain, and doing so in the company of friends. No need for the use of protractors to wheel a unit and arguments over whether a charge is 2mm out of range or not are things you’ll no longer have to worry about. In essence it’s a very relaxing game that can produce stunning conflicts – conflicts that can see one side appear doomed only for them to pull victory from the icy grasp of Mistress Defeat!