The Luftwaffe dominates the skies over continental Europe, ably assisted by the technologically superior Bf109E. Only the nimble Spitfire is a match for this Teutonic beast! 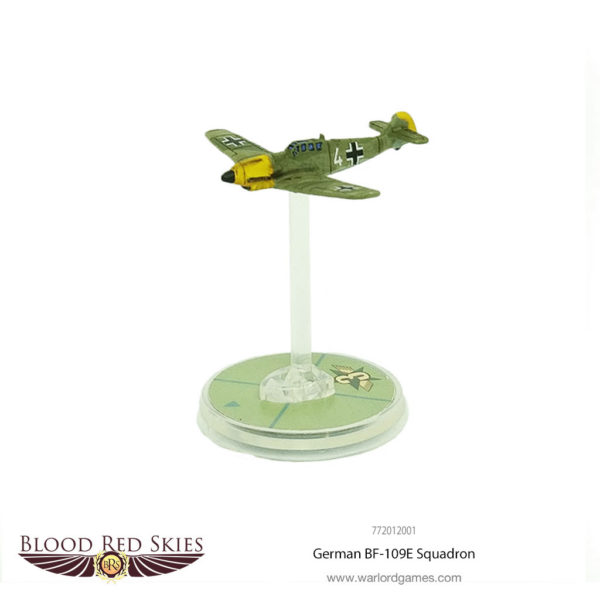 When it was introduced in 1937, the Bf109E was one of the most advanced aircraft in the world, incorporating cutting-edge technologies and design techniques which gave it an edge over the competition. In July of that year, three D-model aircraft debuted at a Swiss airshow, where it took first prize in three categories. In November, it would set a new airspeed record for a piston-engined plane.

Messerschmitt continued to develop their engine technologies, fitting them to successive marks of racing aircraft which went on to break airspeed records. In 1939, a Luftwaffe captain set a speed of 469mph in a race-modified 109, a record that would stand until it was broken by a modified F8F Bearcat in 1969.

Clearly, this design represented a leap forward in aircraft technology and a massive threat to any enemy fighters in its path. Armed with a pair of 7.92mm machine guns in the nose, and two 20mm cannons in the wings, the Bf109 punched well above its weight, outgunning most Allied fighter aircraft.

The Bf109E first saw service during the Spanish Civil War, where Condor Legion pilots savaged the Republican opposition, plucking unfortunate I-15 and I-16s out of the air with ease. Its dominance of European skies continued through the invasions of Poland, France and the Low Countries, only challenged by the vaunted Spitfire during the Battle of Britain.

Its shortcomings boiled down to low fuel capacity and a large turning circle. RAF Spitfires proved to be particularly effective, as their agility gave them an advantage against the much faster Bf 109s.

Tom spends most of his time buying books and painting miniatures. He enjoys putting animals on the bases of his miniatures and half-finishing side projects. Some say that he lives in a tower on top of some windswept northern hill with his wife and cow-patterned cat, Spaghetti.
View Profile | View all posts by Tom Mecredy
Blood Red Skies: The Hawker Hurricane
Blood Red Skies: The Focke-Wulf 190A