Max from our customer service team has been painting up an Afrika Korps army for a tournament. We couldn’t resist sharing it with you… 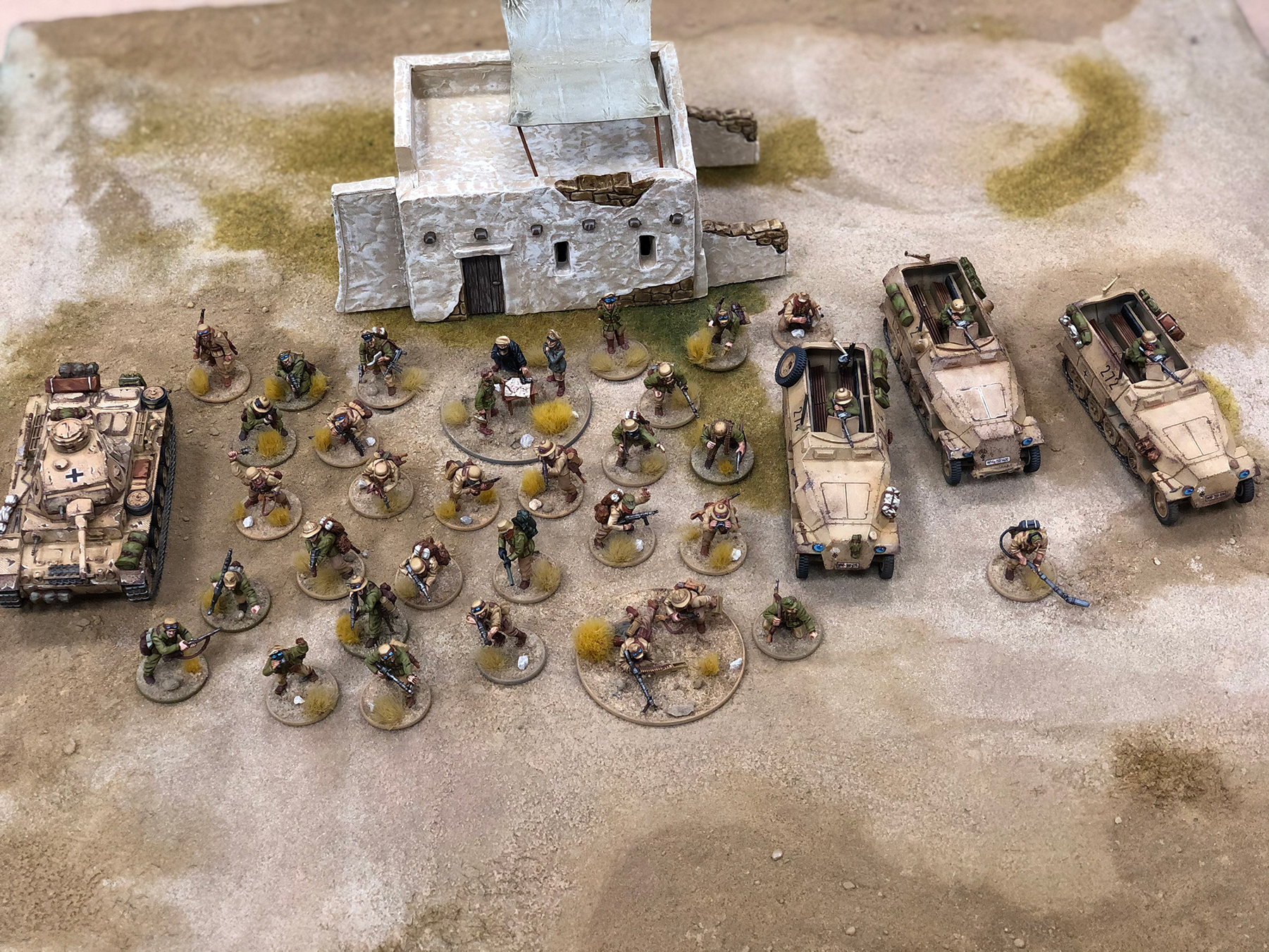 Max Ayson, from our customer service team, has been wowing us around the Warlord offices with his beautifully painted Afrika Korps army. You can see it in all its glory below, and Max tells us a little about his inspirations and motivations behind collecting the army. 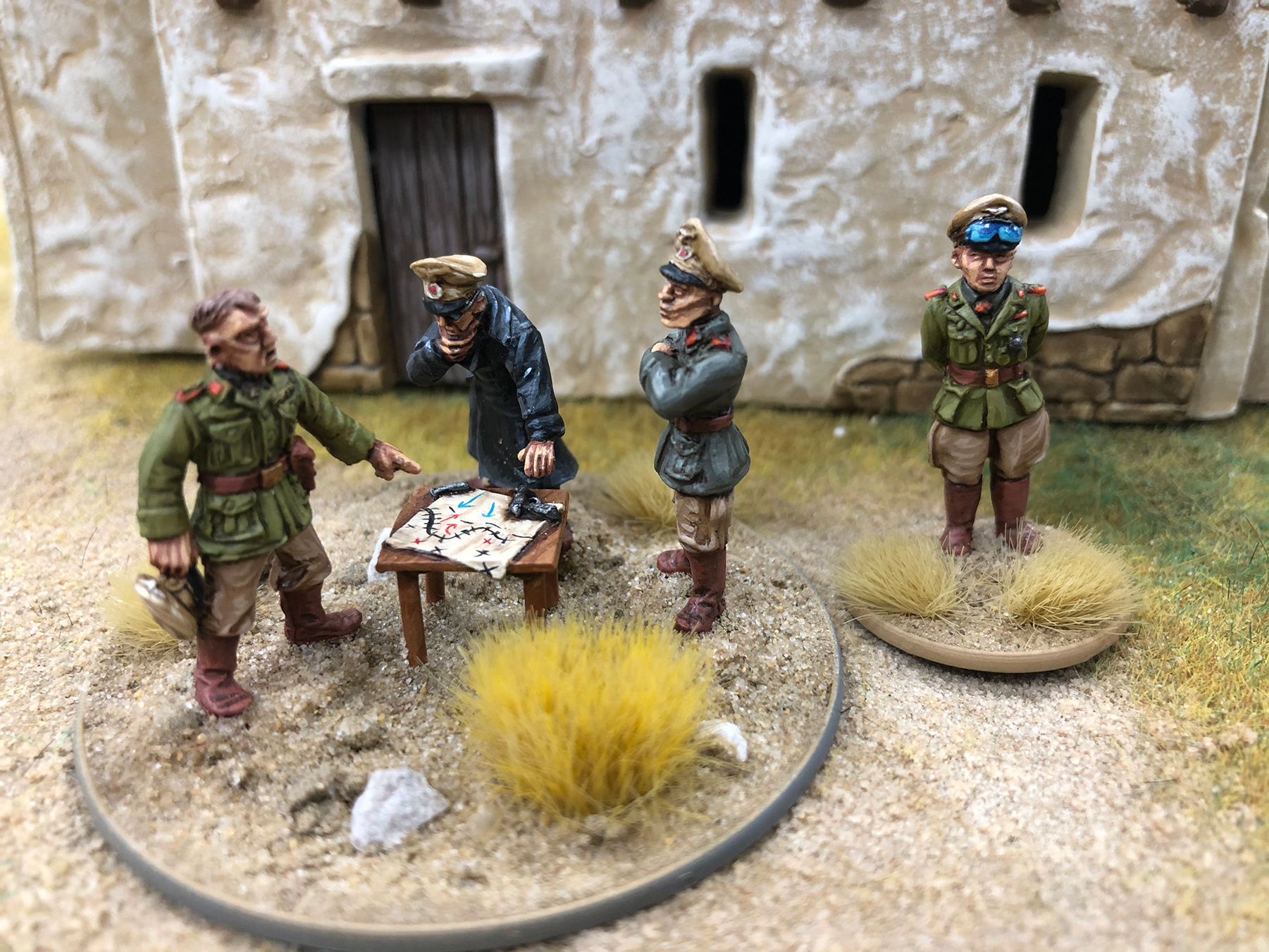 Max: It dates back to my teenage years, making up Airfix/Revel kits. I bought loads of Panzer IIIs, trucks (even a King Tiger I painted up in DAK colours – I was young). This was really the time I started to become invested in the history of World War II and they never really left my mind. So all these years later, having already collected and built a Soviet Army, I thought I’d return to them for Bolt Action.

Max: I’m building this army for a tournament in which it was encouraged for players to go out and really research a specific period and theatre on which to theme the Army. I picked the battle of Gazala of mid-1942.  Being around the mid-point of the campaign, it would allow me some flexibility with the paint schemes. I envisaged that some of the early war uniforms (in bright green with the high boots) may still be in use as well as the later tan/yellow versions – I could, therefore, include both versions for some variety which I thought would make it more striking on the tabletop. It also enables me to multi-purpose my army for causal games if I fancied using it to try a late war list – without it becoming too incongruous, 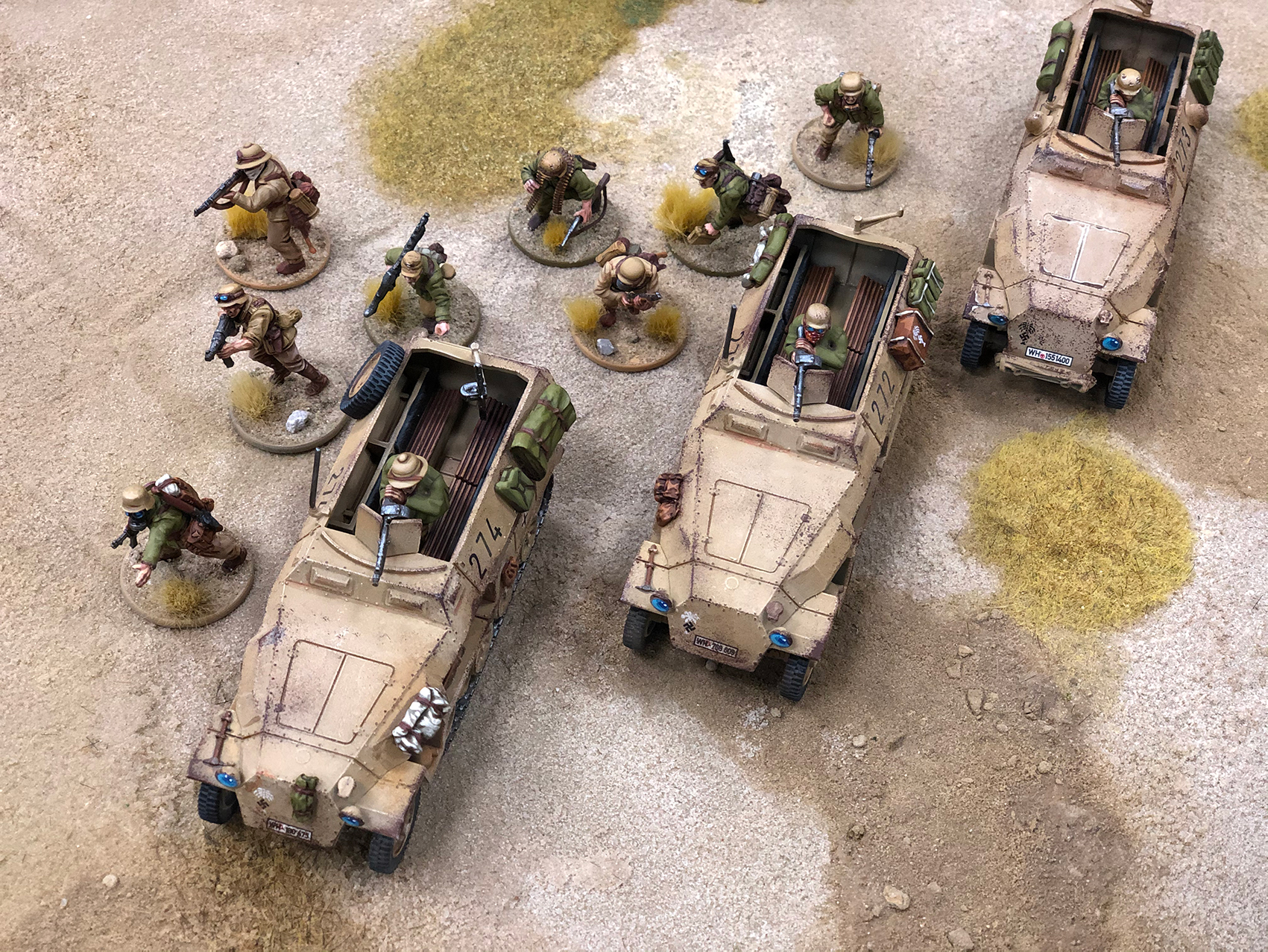 Mobility is key to this DAK army

Max: I love the Pioneer Squad, kitbashed from the remnants of my plastic Afrika Korps sprues with the Blitzkrieg Pioneers kit. Whilst not initially a perfect fit, with a bit of clipping (and some patience) they were really cool to put together. I managed to include a flamethrower and minesweeper. I certainly consider it the most unique of the Army’s units. 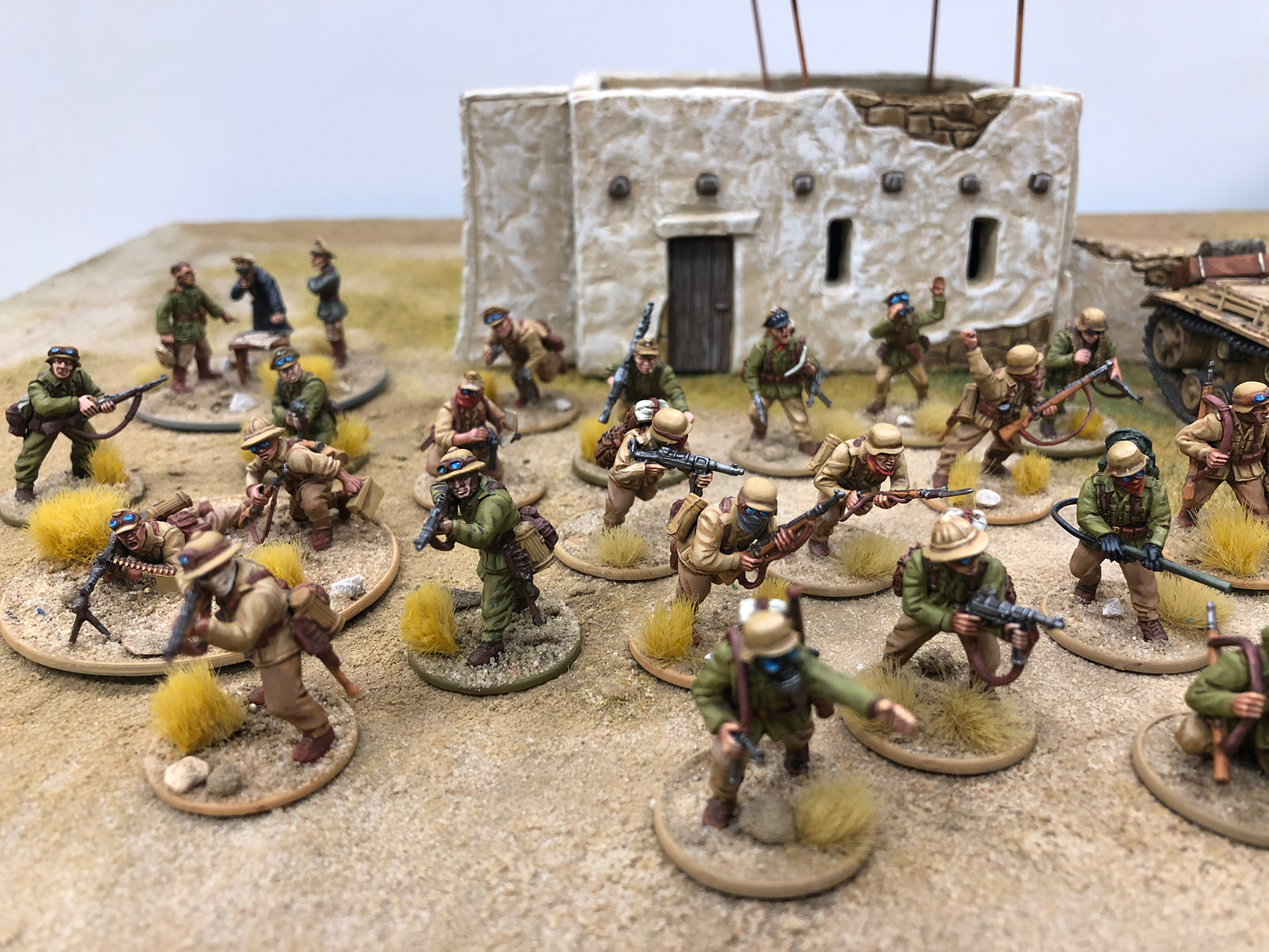 You can see the mixture of uniforms amongst Max’s infantry

Max: I really want to step up the armour in the army and add some more Panzers (IIs IIIs and IVs). I’d like some trucks as well. Currently, I’ve got exclusively Hanomags as transports – which really pushes the infantry towards veterans in force selection. A few trucks will open up a bit more versatility in list building I feel. 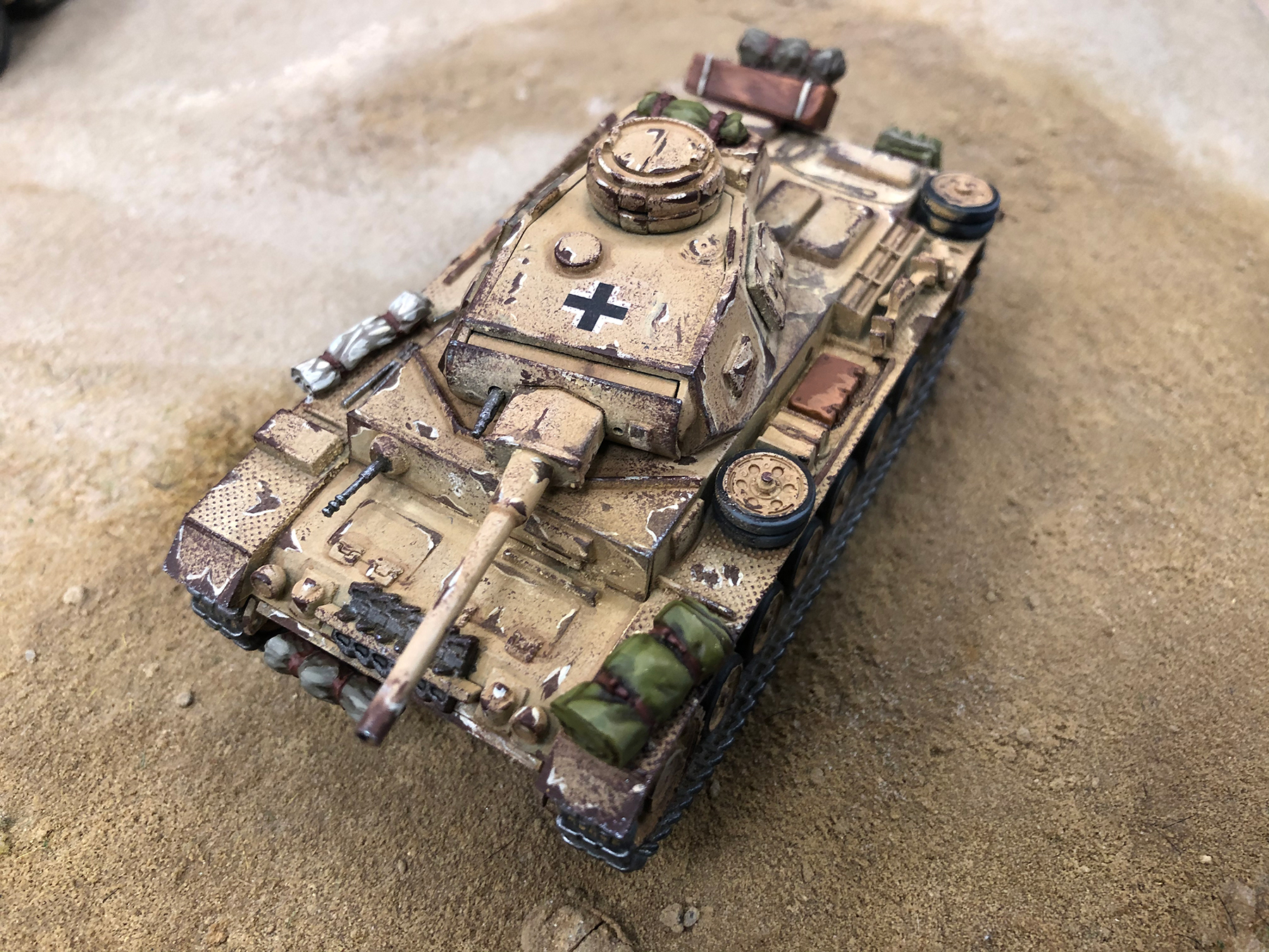 Get Started with the Afrika Korps

Inspired by Max’s efforts? Try your own hand at the Afrika Korps in Bolt Action. There are a number of easy starting points into collecting a DAK army. 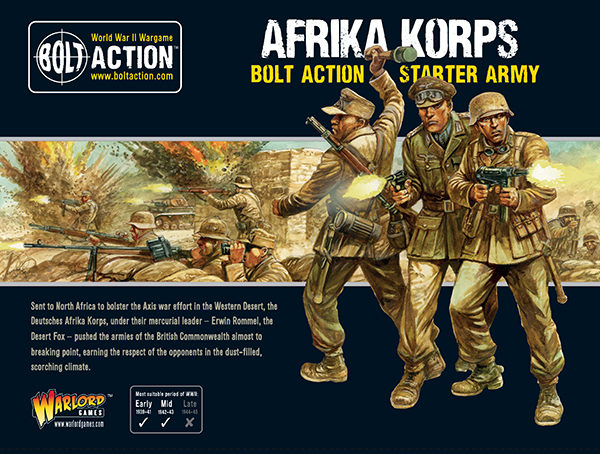 The bulk and strength of the majority of Bolt Action armies are its core infantry blocks. This bundle includes 3 boxes of Afrika Korps (each containing 30 soldiers), with which you get a FREE metal 4-man command group (worth £6). 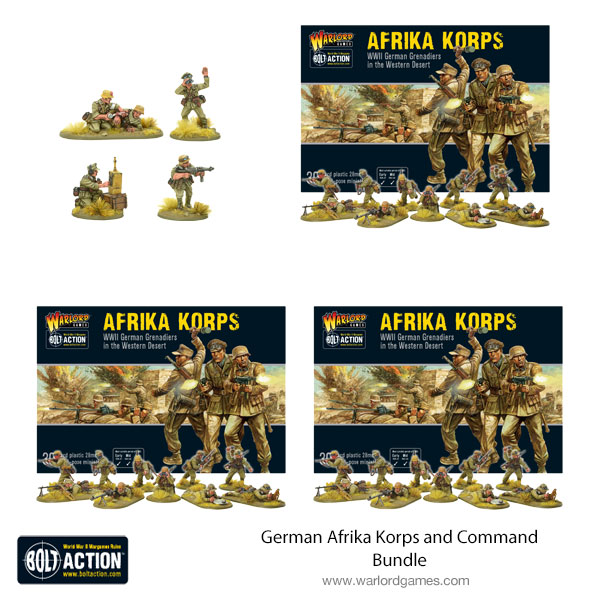 Envisaged in a similar vein to Max’s army tactically with mobility at its heart, this set contains everything you’ll ever need to field a DAK force just like they would have been deployed in the desert! With heavy elements of infantry and transportation, this army suits those who want to control the battlefield through tactical outmanoeuvring.

This set provides everything you need to get started in Bolt Action. It has been designed to create a competitive 1000 point army which is the standard of Bolt Action games. It also comes with your order dice pack, which contains 12 order dice required to field your army, a thematic German dice bag and a FREE Armies of Germany 2nd edition book (with exclusive figure), essential for all the information about your army and the history of the German forces 1939-1945!

This entire force has been optimised for mobile rapid offensives almost identical to its real-life counterpart. Almost all of the infantry can be placed in the back of each vehicle which makes this army extremely potent at objective type missions!

An essential tool in playing game set in the Western desert is the Western Desert Campaign book.

Our desert German Bolt Action range is extensive. With the Armies of Germany and Western Desert books as your guide, you can expand your force in innumerable ways, making your army truly your own and distinct on the battlefields of Bolt Action. For more inspiration, check out this painting guide on Afrika Korps Kradschützen. (I don’t know about you, but they really give me a pulp adventure vibe).

Check out the full Afrika Korps range in our Webstore. 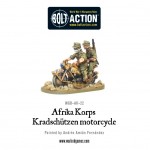 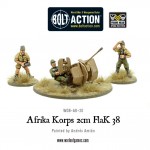 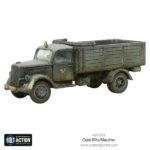 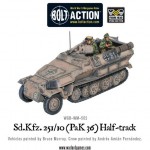 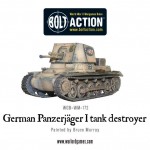 Remember for a limited time there’s a massive 25% off some of our plastic tank platoon and Zug kits, including the Tank war German starter: 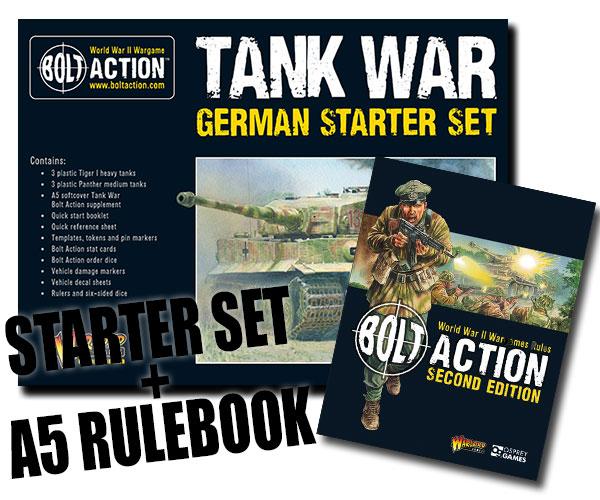 See all our current deals

Dan can often be found contemplating the mound of unpainted minis building up under his desk. He has a tendency to roll lots of ones. He also has a tendency to complain about rolling lots of ones.
View Profile | View all posts by Dan Hewitson
Bolt Action: Winter US in the Ardennes
Hobby: Painting Street Bases 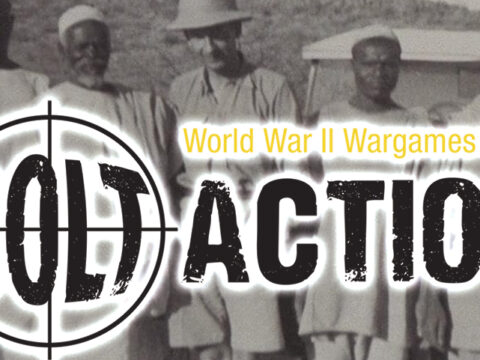