ZG 1 flew operations in the invasion of Denmark and Norway, then France 1940. Reformed in 1942 from Geschwaderstab of Schnellkampfgeschwader 210, The Bf 110 of ZG1 moved to the Eastern Front where they were to achieve a huge number of ground kills whilst carrying out strike missions and providing tactical support to the advancing German Army. 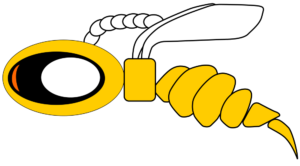 This set gives you all you need to field seven aircraft of the ZG 1 Bf110 heavy fighter wing in your games of Blood Red Skies!