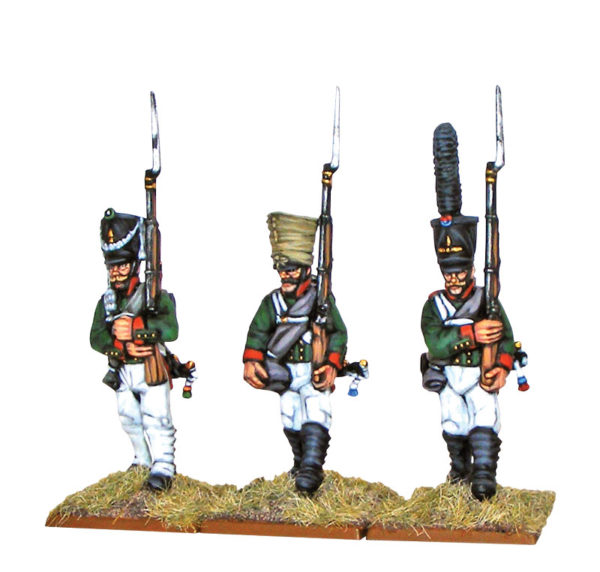 The Russian army of the Middle and Late Napoleonic period (1808 – 1815) was based on a dark green jacket with white trousers.  The exact nature of dark green is always a matter of debate.  If you look at Knötel, the best way to describe it would seem to be olive green.  It has also been described a ‘bottle green’, and it more than likely came a various of shades but it certainly would have been a dark green.. 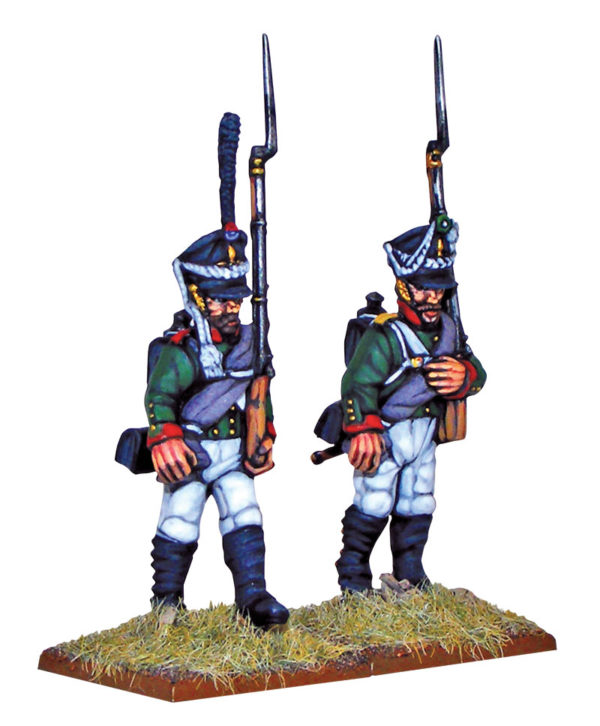 By 1807 all regiments had red collars, cuffs and shirts.  Shoulder straps were based on their seniority of the regiment within the division.  Since the army organization was mostly static the periods you should research are up to 1811, then the period of 1812 – 1814.  As such, the 1st regiment was red, 2nd white, 3rd yellow, 4th dark green piped red and 5th light blue. 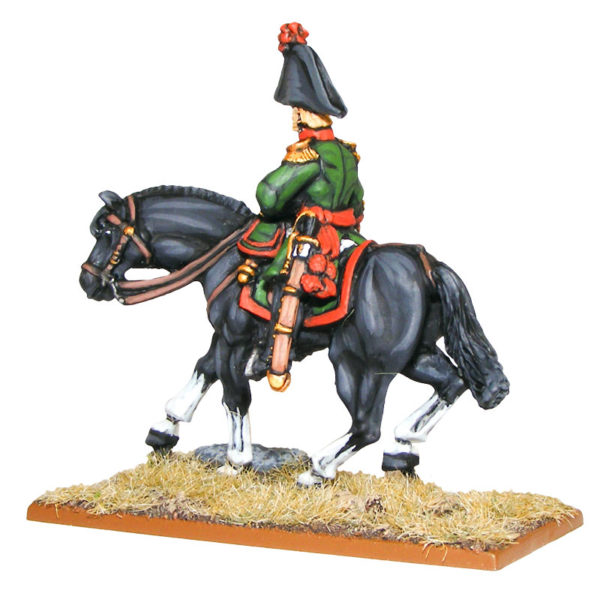 The division number was embroidered onto the strap. The jacket had 6 brass buttons on the lapels, three on the cuff flap and one on the shoulder strap.  The leatherwork was white leather.  The sword hanger was black leather with brass bindings and fittings.  The sword strap was white, but the bell and fringe were different for each period.  The greatcoat was worn on the knapsack or over the shoulder and was brown-grey in color.  The knapsack was black leather or canvas. 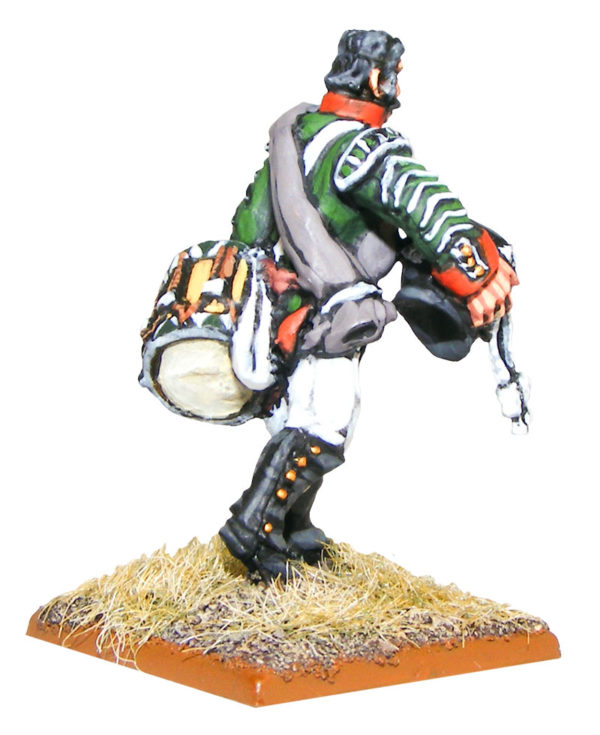 The shakos were black felt with leather bands on the top, bottom and sides.  There was a visor in front.  In the center was a brass grenade with a flame on top for musketeers.  Grenadiers have the flame on the sides of the grenade as well.  Up till 1809 some shakos had a black cockade, edged with orange and held with a brass button. 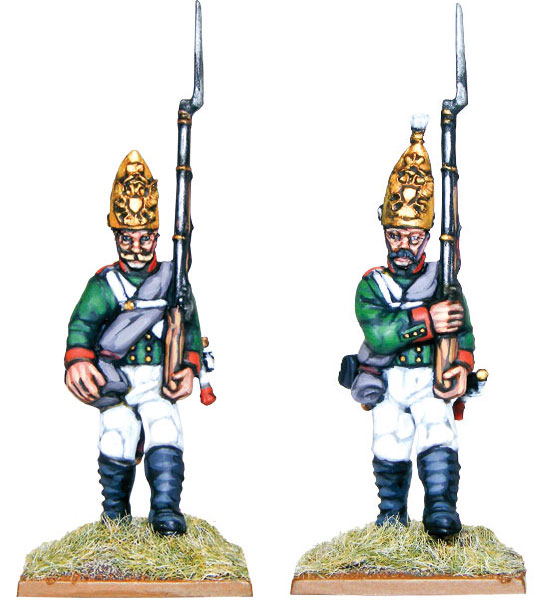 Units were further distinguished by the sword strap and knot.  The strap and fringe was white, but the ball was:

In 1811, greatcoats were given coloured cuffs that matched the regiment within the division.  For example, one department had this scheme:

Jaegers regiments wore the same uniform, but in a lighter shade of green.  The collar, cuffs and lapels were also light green, but piped red.  The shoulder straps were in the divisional colour, so that the second regiment was pink.  The pompoms were coloured by with the center in the divisional colour.  The battalion colours were 1st – white, 2nd – yellow and 3rd – red. 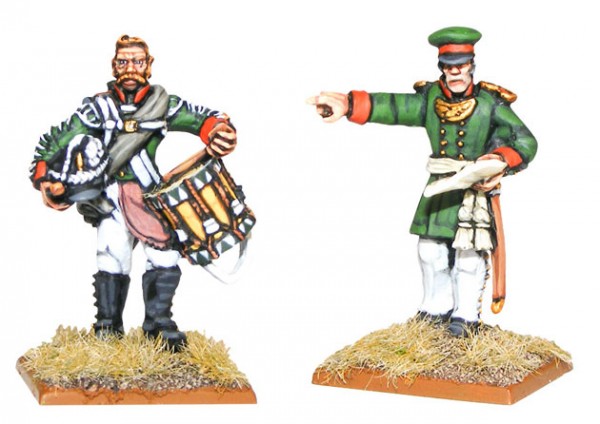 Officers have gold epaulettes and a white sash with orange and black lines threaded through it. 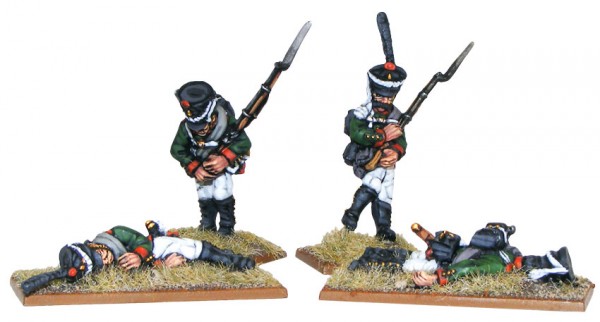 Flags cover two period – 1803 and 1813.  In 1803 each regiment carried one “white” flag per regiment and one “coloured” flag per battalion.  The flag was 140 cm by 140 cm.  The center of the flag was a gold laurel wreath, the wreath tied by a light blue ribbon.  In the center was a black two headed Russian Imperial Eagle. The eagles have gold crowns and holds gold lightning bolts.  Above the wreath is a gold crown.  From the corners of the flag came borders toward the center forming a Maltese cross on the sides, top and bottom.  In the corners is the imperial cypher in a laurel wreath surmounted by a crown – all in gold.

In the “coloured” flag, the background is the inspectorate colour and the corners white.  According to Over, after 1807 the inspectorate system was no longer used for flags, and new systems did do use this system.

After 1813, all new flags issued to the line infantry were green with white corners.

The website: Warflag.com is a great source for Russian flags of this period

Over, Keith.  Flags and Standards of the Napoleonic Wars. Bivouac Books: London 1976.