Watch chaos unfold as the Scottish and English duke it out on the Pike & Shotte battlefield.

Once more the red mist had descended over the eyes of Col John S as he charged The Great Sconce barricades to dislodge those despicable Scots firing on his beloved English shipping.

It was a dark damp early July morning in 1650 when he and his fellow braves were disgorged from the illusionary security of their skiffs to traipse in-land to take with blood and toil, the Great Sconce, whose heavy guns were devouring all before them. Visibility was so poor when the first group stumbled upon Scottish sentries lurking in an outcrop, but with skill, determination, and the fact that they were looking the wrong way, they were overcome. Not so the furthest column bumping into a small out stead let the Scots sentries open fire. Was the noise enough to alter the Sconce? A dice roll saved the whole.

Suddenly excited eyes made out the looming battlements of part of the Sconce with its large guns and there was the target. 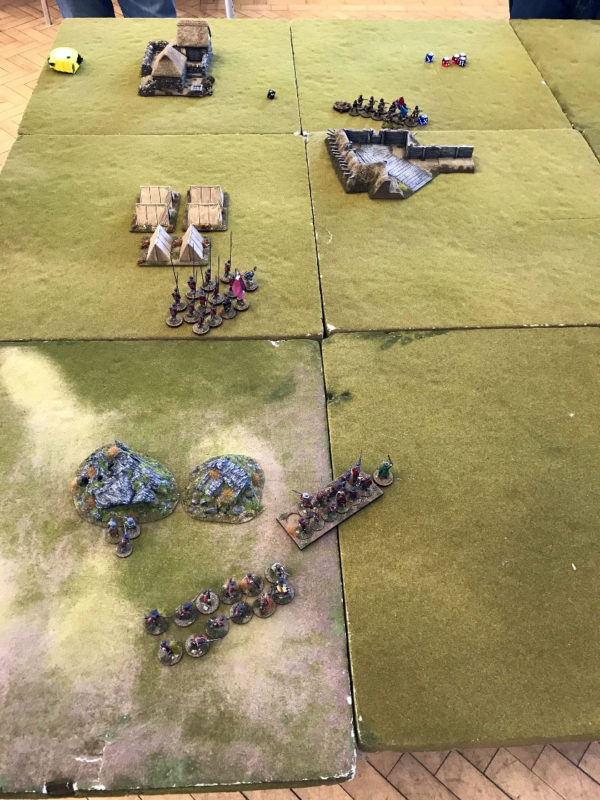 The early plan of waiting and concentrating the English forces went like the dawn mist as each party charged forward. 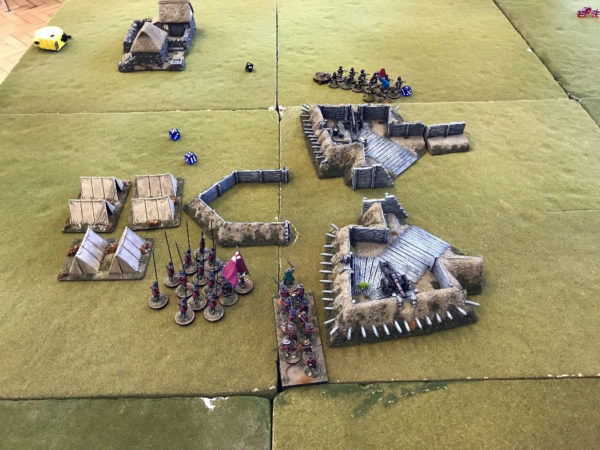 Into the early gloom went a Scottish alarm flare and the prepared dispatch rider was let loose, as the first English column, led by Col Robert Overton ‘hop along lads’ (aka Andrew), avoiding the large sharp pointy places where the guns crouched menacing, charge the middle embrasure. 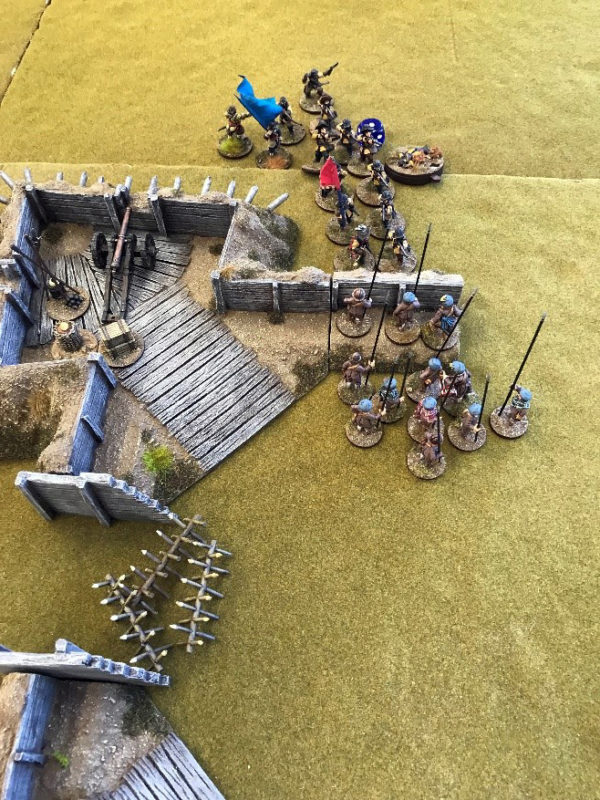 The plucky Scots shook them off like a dog shaking water off its coat.

Would this be the way it was to be?

By the entrance the two-pipe leather gun barked as Col J ‘huzzah’ waving his red flag led his troops in his first of many red mist adventures. 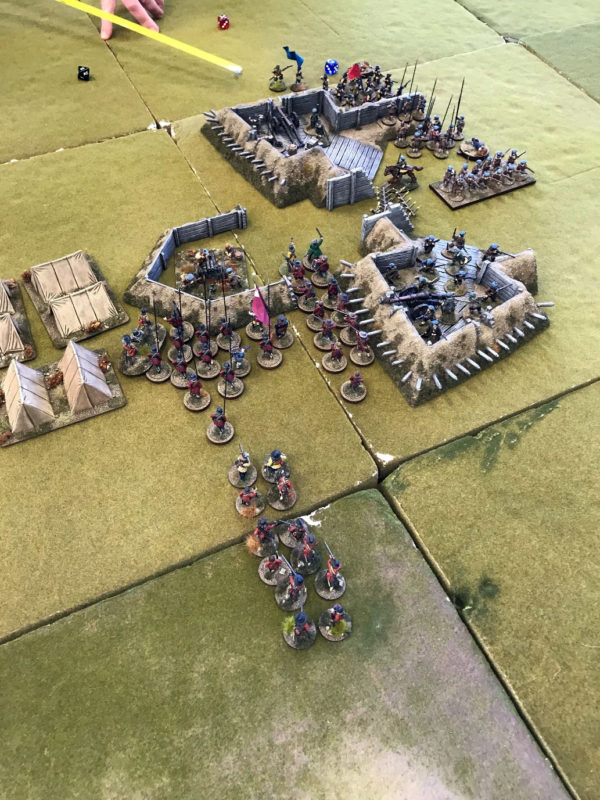 Would the Dice God’s roll in his favour?

Back he went, howling his anger.

The third column, led by Charles ‘Lets have ‘em’ following the Red Mist Colonel, had their eardrums blown as the Scottish gunners, used to firing on small wee shapes out in the yon waters for the Firth, had a glorious target.

These too were pushed away.

There must be another way the English thought in as yet again these brave lads were thrown back and as the light cleared the whole of the Sconce’s defences was revealed. 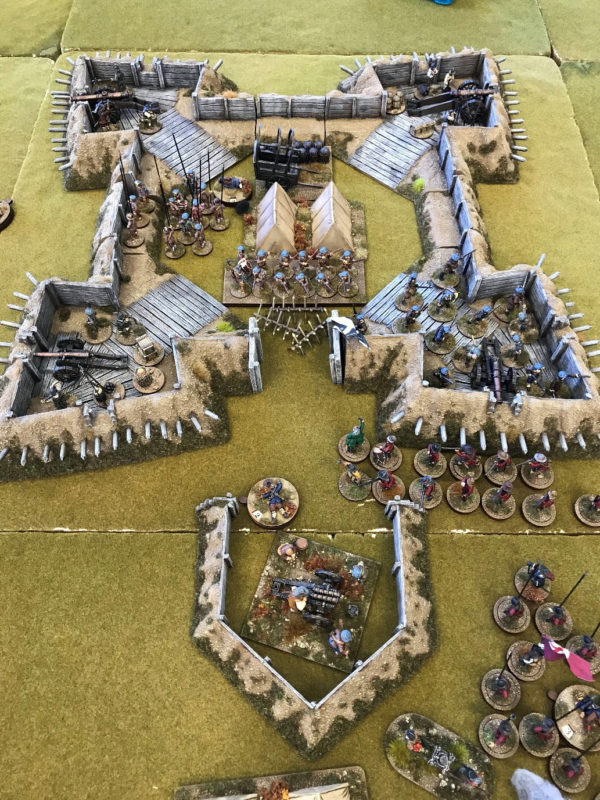 English hearts sank, it was enormous!

A conference of war between the English commanders determined that a concentrated attack, (haven’t they thought about that earlier? Ed.) decided to send the Pioneers into the front with the petard and the units with the grenade over the nearest undefended side. 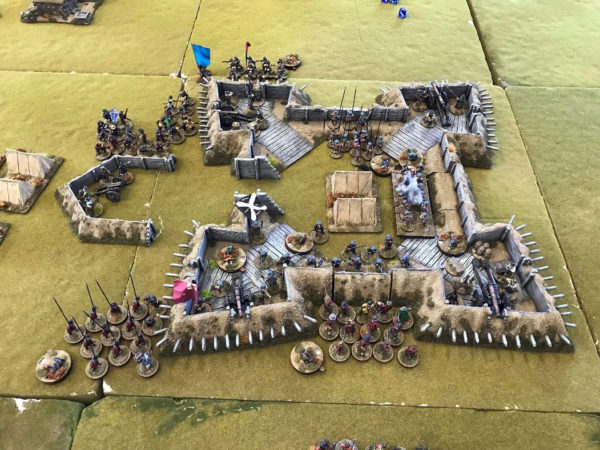 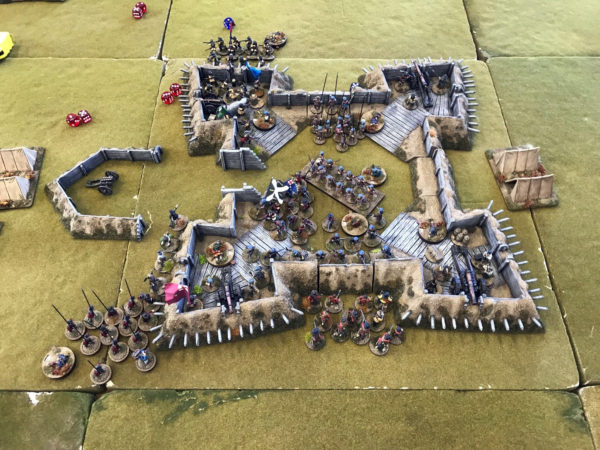 Argh, what sweet joy, as the pioneers watched the petard explode, opening the way in. Yet, seeing an open door, the lads, whose eardrums were blown by that large nasty gun earlier decided that the ramparts without storming poles was a better bet and charged once more into the breach.

The Scottish dog shook them off with ease. (This is becoming an embarrassment!? Ed.) Was this the beginning of the end? In the distance could be heard the wail of the bagpipes that the dispatch rider had summoned.

Suddenly the dam burst and two English columns (rather disordered) were in the Sconce, having, being of fair mind and compassionate heart asked the inhabitants of this annoyance to surrender.

Ney, ney, ney their confident reply resounded as looked as if they were to be thrown once more from the walls.

Col J ‘Huzzah’ being the nearest to the arriving reinforcements gamely headed them off and somehow in the ensuing sortie acquired a large great Dane and a hedge harlot. Such is the luck of the brave. 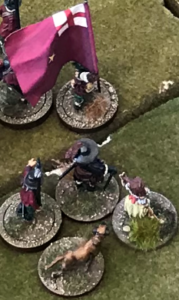 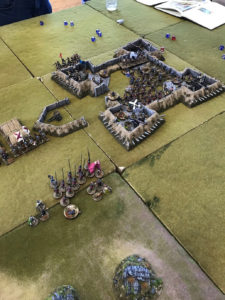 Then the English realised that there was no front door (I wondered when they would come to that after such a large explosion? Ed.) and charged through.
“Don’t forget to stop the guns”, came a shout out of the melees, as the Scottish gunners, true to their very last, continued to pour fire on the English fleet. What the English commanders hadn’t told these brave lads was “if we don’t see an English flag by the rising sun, we will fire on the Sconce”. Ouch. Was there an English flag? Two rose into the rising sun. 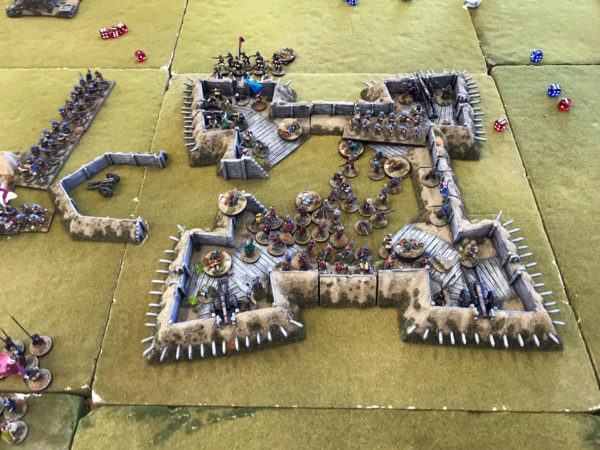 The combined weight of the English mass pushed the lads in the bluebonnets out and over the ramparts. This wart on the side of all that was good was finally taken.

That was a great adventure shouted Col J as he patted his recent acquisitions. “Jolly well done”. His brave lads duly shouted and laughed their agreement.
Those who took part would like to thank Andy Bartlett for this inspirational game and Ed for his wonderful luck of the God’s dices throwing as the Scottish Commander, brave even until the end.

From the reminiscences of General Charles ‘let em have it’ Gainsborough House, Battlebrook Drive. 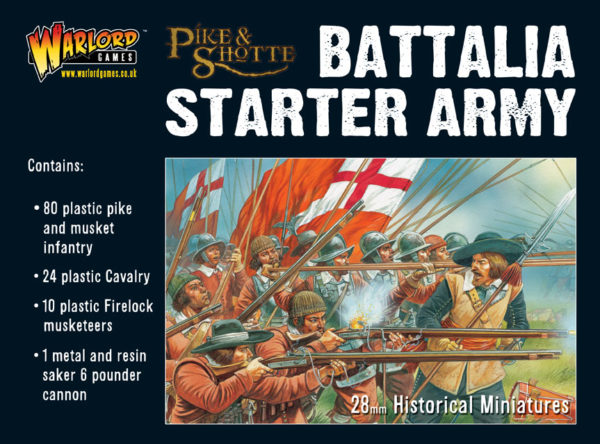 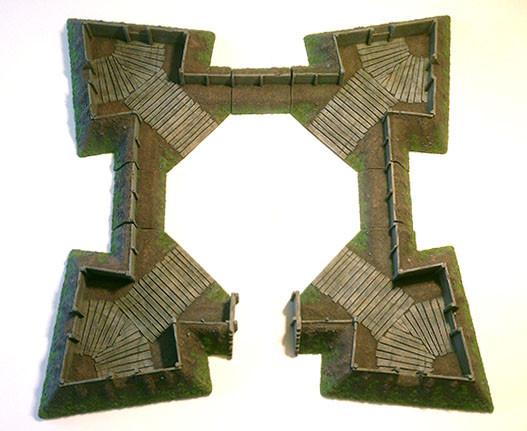