Anyone spending more than a few minutes in Paul’s company won’t help but notice he’s a fan of the Germans in WWII. We’d say ‘all things German’ but his views on Michael Schumacher and lederhosen bely this (although we have our doubts about the veracity of the lederhosen denial…). So, it was a foregone conclusion that Paul would be painting Germans of some flavour or another for Bolt Action. The only surprise is it was the Heer he plumped for and not the Waffen-SS. Here Paul tells how he got started with his first squad… 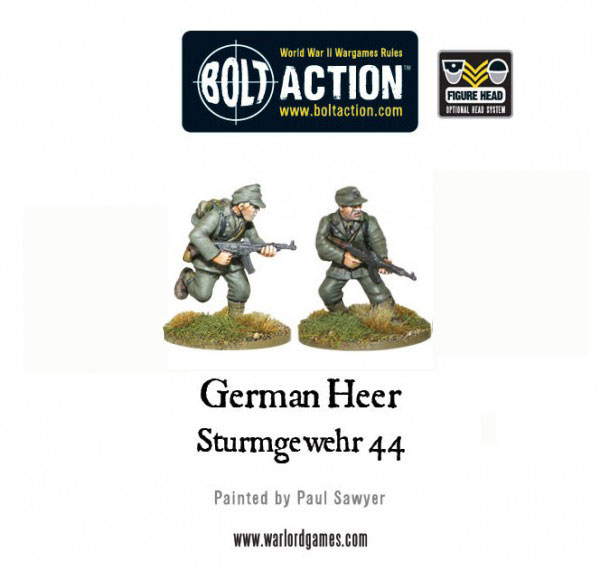 Paul: With the Bolt Action rules being worked on I was all set to start a new Waffen-SS army. However, part of me really wanted to do a force based on the less glamorous Heer foot soldiers. Clad in their field grey uniforms and doggedly taking on the best the Allies could throw at them, these experienced, hardened soldiers had seen it all in the early campaigns of the war in Poland, France and North Africa as well as the unforgiving Eastern Front. No, there would be time for camo smocks later – I was going to build a German Heer army.

It’s worth saying from the start that our plastic sets are great right out of the box even though I’ve done a fair bit of converting on my squads. That is purely because I love that part of our hobby and it scratches my creative itch. I find it’s worth taking the time with all the arms and weapons and a lump of blu-tac, trying out as many different variations and positions as possible. Some come very easily, others will jump out after a little persistence. Another tip is to check out period photos and war films for natural poses or dynamic, action positions. My kids thought I’d lost it when I stood in the front of the mirror mimicking a variety of poses for ideas. Jolly good fun though and took me back to my youth, me and my mates playing with stick guns and pine cone grenades!

For personal aesthetics I decided to build one squad to be firing whilst the other was advancing. This would help keep the squads distinct on the tabletop but also allow me to convert with more freedom. First I’ll talk about the sensitively titled Firing Squad…

As previously mentioned, the first two squads would have a different dynamic – this one letting loose with a variety of weapons. Many of the heads in these squads were plucked from the large range of German Figure Heads on the Warlord webstore. 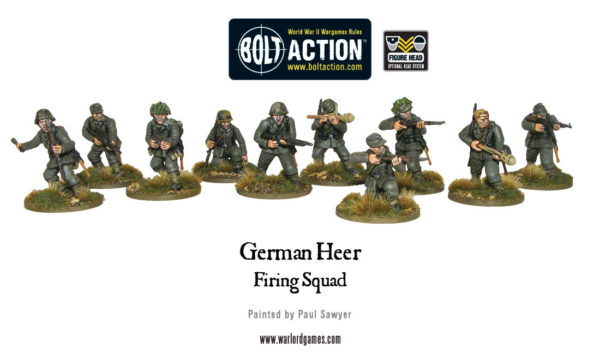 Ah, the much-feared Spandau – Hitler’s Buzzsaw – it’s tell-tale ripping report was not something an Allied soldier wanted to be on the receiving end of. I knew from the start that I wanted to have a team being fired from the hip after seeing this video about the best stance for firing this way. The kick is such that you have to lean into the weapon to maintain some semblance of aim. Of course, you really want a more stable firing position than this (such as prone using bipod or across the shoulders of the teams number two) but I couldn’t resist. The teams number two/loader waits patiently with a case of fresh ammo. The only conversion work here is the loaders left arm which is taken from the plastic British Infantry sprue and removal of the ammo pouches with a sharp knife and a modicum of care! 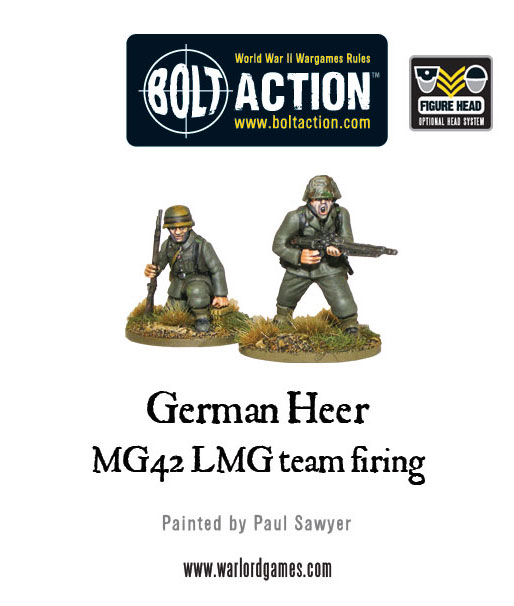 The world’s first true assault rifle, the Sturmgewehr 44 is as beautiful as it is deadly. That I kept the number of these weapons down to just two per squad still amazes me. One of these models is stood, taking a shot before moving to a fresh position. I was careful to position the head so he was carefully aiming. Aside from the metal Figure Head this was a pose straight out of the box and one of my favourites. The other trooper with assault rifle took a little more work as he’s replacing an empty magazine. This is as simple as cutting the magazine off the weapon and adding it to the models other hand. Some of the most effective conversions are very simple – you don’t have to chop the models to pieces to get great results. 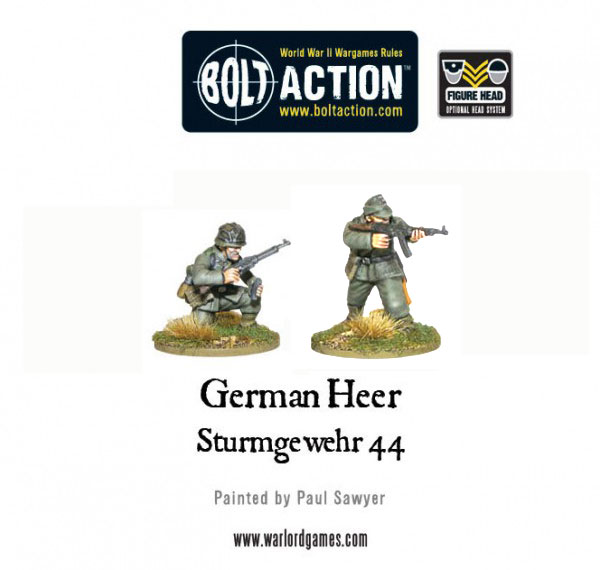 The first of the more involved conversions, this soldat is captured lobbing his stick grenade. Rather than a static pose with arm outstretched I wanted to add a degree of fluid movement. Both legs need to be repositioned to achieve this and to angle the body so he is leaning back, taking the weight on his back leg. The grenade arms was taken from the plastic British Infantry sprue with the and replaced from that on the German weapon sprue. The other arm simply had it’s hand rotated to hold the rifle in a natural position.

It’s worth mentioning that there is a lot of crossover between the various Bolt Action plastic sprues – replacing arms with those from another sprue really does give you a load more options. It’s well worth picking up a spare sprue or two just for this. 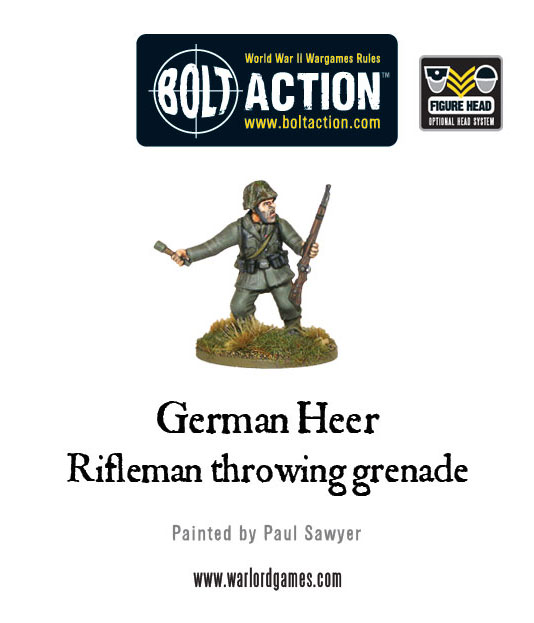 Panzerfausts! I’ve added a couple of these ubiquitous one-shot tank killers to each squad – it wouldn’t be right not to as you only have to check out wartime newsreels to see how many were carried in the latter years of the war. At an extra ten points per Panzerfaust there really are a necessity to worry enemy armour. More than once I’ve seen Allied tanks stay clear of squads including Panzerfausts – clearly the tankers have faced these weapons before.

The first of my Panzerfaust soldiers would be walking wounded. The head was again one of our German Figure Heads with field dressing applied over a head wound. As this precluded him from wearing headgear he has a stahlhelm hanging from his belt. Other touches were the addition of a rifle sling and positioning his arm to show him taking the weight of the weapon as he stalks his steel quarry. Finally, a veteran of the war and of kocking out enemy armour, his uniform bears two tank assault badges on his sleeve. The second soldat is firing his anti-tank projectile. Other than adding the raised sight to the panzerfaust and repositioning the arms to hold the weapon correctly, this is a model straight out of the box again. As with the other tank hunter I’ve added a rifle sling to his trusty Kar 98K. 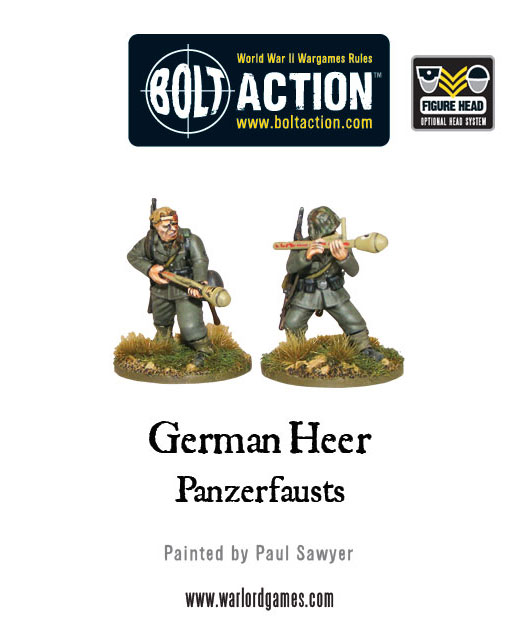 The second squad has a bit more conversion work in it. Primarily because the majority of the poses in the boxed set are firing or relatively static positions as you’d expect from an army on the back foot largely. That said, the German forces were well known for swiftly counterattacking lost positions and I wanted to reflect this in the army too. 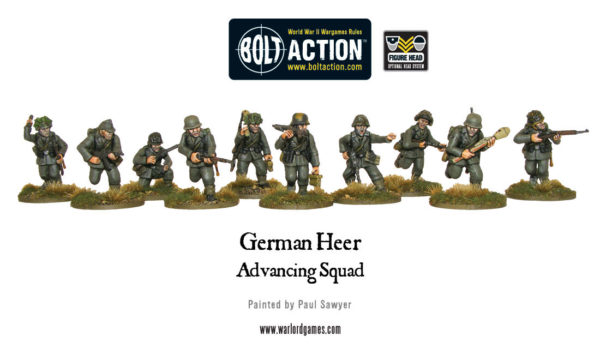 Most of the models in this squad had their dynamic changed by the replacement or repositioning of their right legs to give a greater feel of movement. To maintain a believable pose I studied how soldiers ran with rifles so they didn’t end up looking awkward. I’m particularly pleased with the soldat firing his GW 43 semi-automatic rifle on the move – with the lead flying through the air you don’t have the chance to stand bolt upright, taking a few seconds to carefully compose yourself and aim as if you’re at the shooting range! No, you keep moving from cover to cover, taking opportunistic shots as they present themselves. 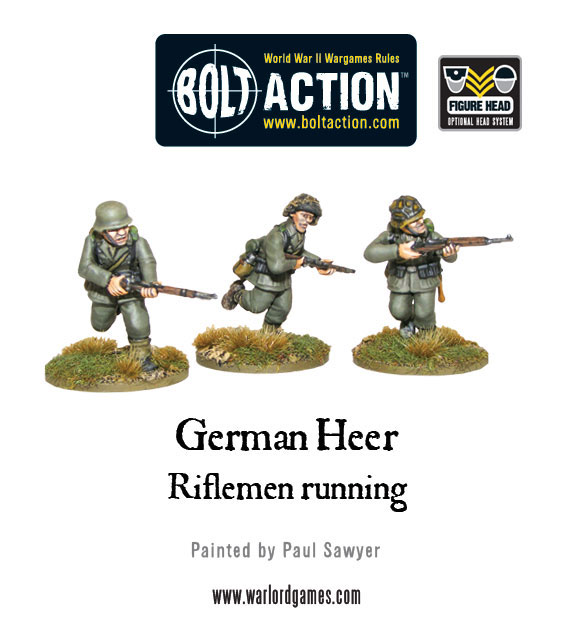 Other than a suitably vocal German Figure Head and a pointing arm taken from the plastic US Infantry sprue, the thing of note on the NCO model is how he holds the MP40. One of my pet hates are models waving weapons around like they are made of balsa wood – these things are heavy! Anyone who has held one of these will tell you that you’d need steel wrists hold them one-handed. So, this chap has his SMG lowered with the stock cradled under his arm for balance as he barks out orders to his squad. 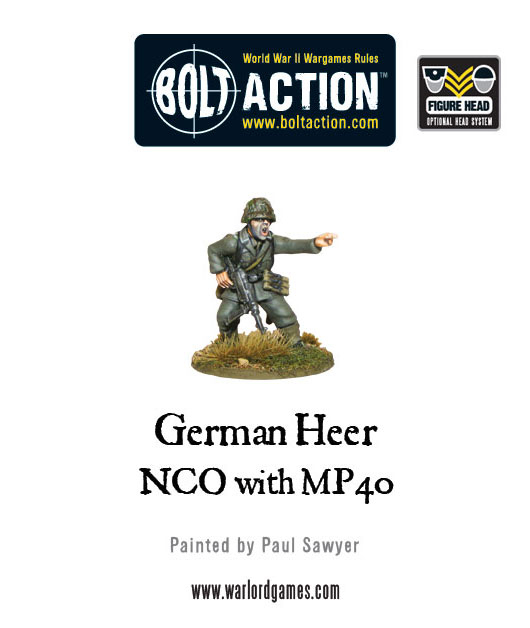 The most involved conversions in my army so far are the MG42 LMG team. As befits the squad on the move I wanted this team to be redeploying to a fresh position and doing so in a hurry! Both had legs replaced or repositioned. The number two is weighted down with gear – rifle, panzerfaust and ammo crates – so isn’t able to move as spritely as the rest of the squad. To represent this I had both his feet planted on the base. The gunner received a left arm from the plastic British Infantry sprue so he could carry an extra crate of ammo for his weapon. Said weapon is balanced on his shoulder as he makes the dash to his new position. 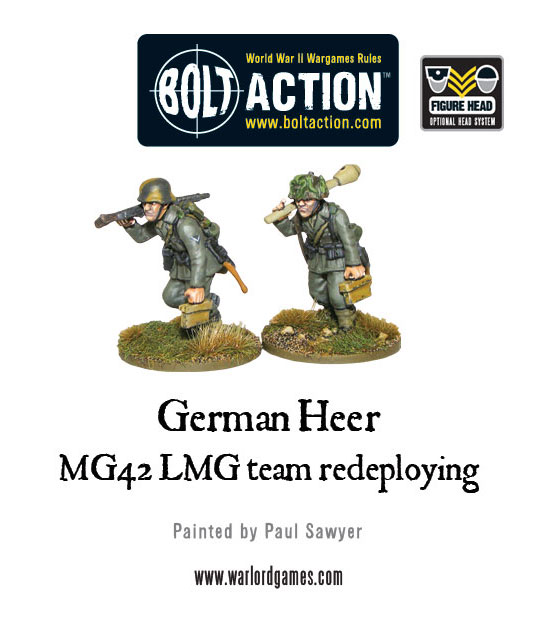 Once again the left leg was replaced on the soldat carrying his panzerfaust – this time the replacement leg was also cut at the ankle to give a more fluid look. Cradling his panzerfaust into his body as he sprints across open ground to the next spot of cover the models head is also tucked in well, as he keeps as low as his speed will allow. With his panzer assault badge proudly displayed on his sleeve this veteran soldier aims to make the enemy pay for every inch of ground… 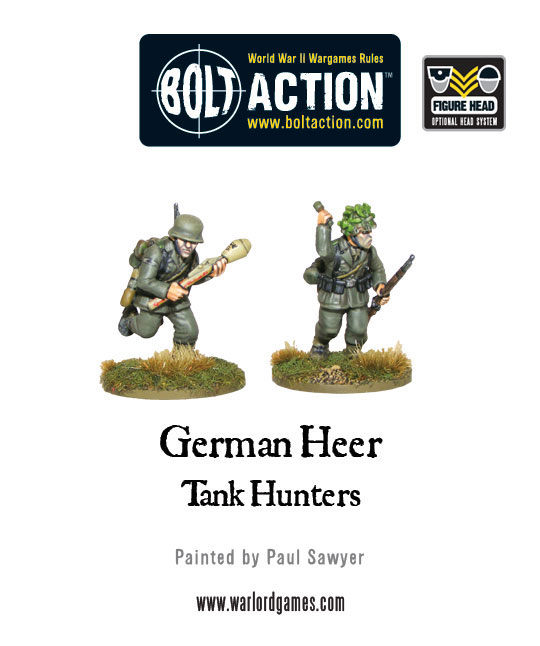 The commander has already been started with a converted officer and two attendant riflemen. These will give me the mandatory elements of the army for Bolt Action.

Next up will be adding support teams to give more punch. As I write this Wojtek has just completed crew for the 120mm mortar so that looks like a potent addition. Also fresh from Wojtek’s sculpting desk is a superb Forward Observation Officer team which I will have a lot of fun painting.

The army is primarily going to be infantry based although the new plastic half-track we’ve just announced is testing my resolve in that regard! I suppose I ought to work out an army list and paint to that but I prefer to build stuff as I feel like it and then play with what I have. As the army grows I’ll have more options and therefore a more flexible approach to games.

Now, where did I put that Field Grey paint… 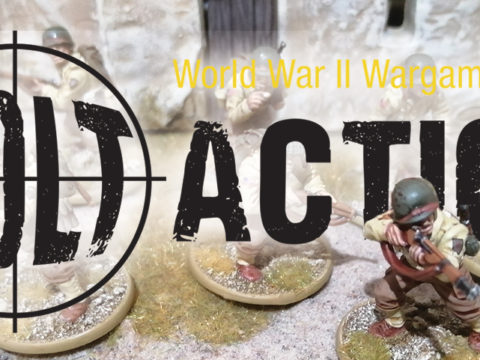 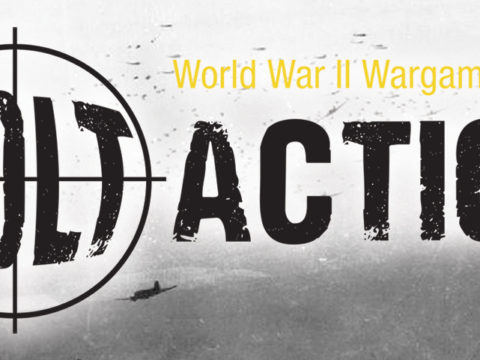 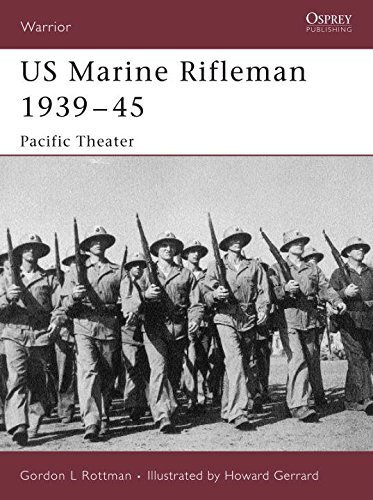 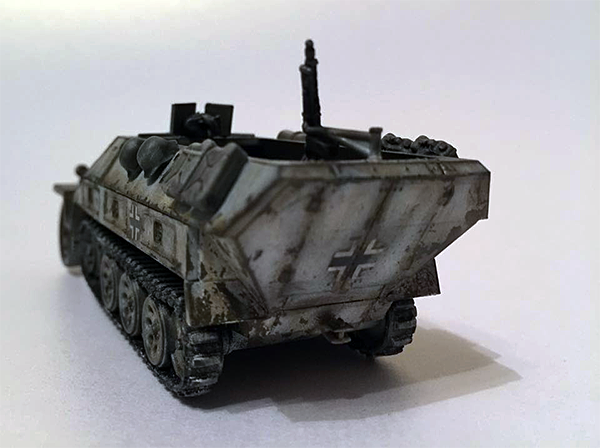 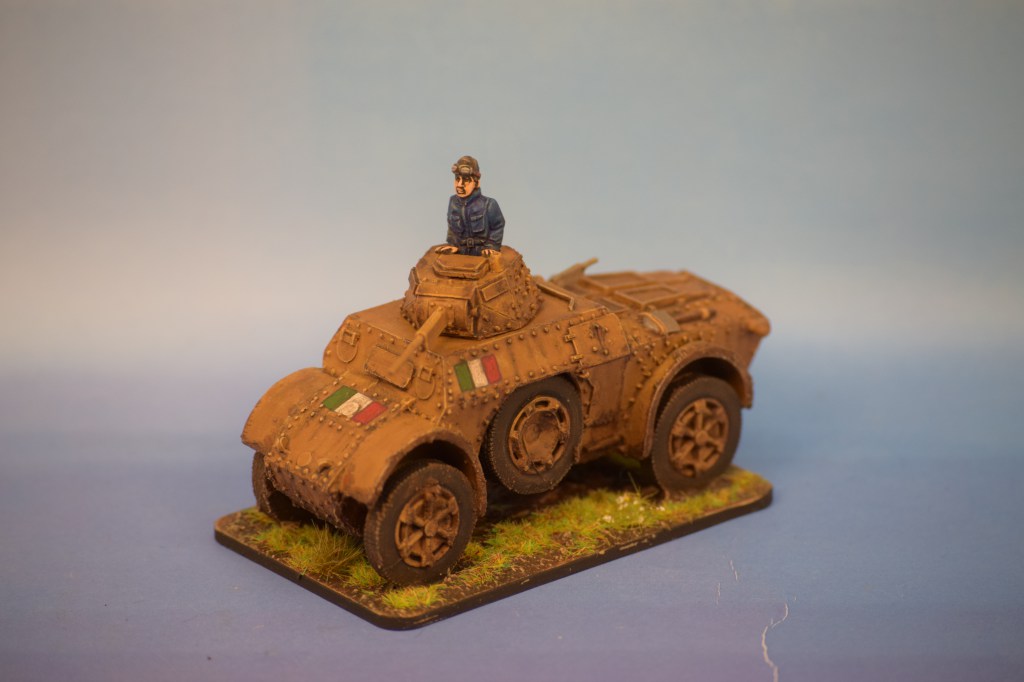 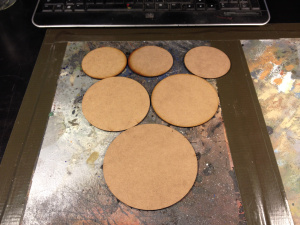