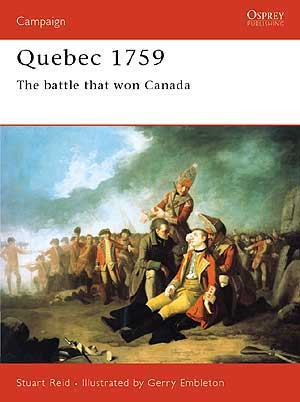 What a scene!’ wrote Horace Walpole. ‘An army in the night dragging itself up a precipice by stumps of trees to assault a town and attack an enemy strongly entrenched and double in numbers!’ In one short sharp exchange of fire Major-General James Wolfe’s men tumbled the Marquis de Montcalm’s French army into bloody ruin. Sir John Fortescue famously described it as the ‘most perfect volley ever fired on a battlefield’. In this book Stuart Reid details how one of the British Army’s consummate professionals literally beat the King’s enemies before breakfast and in so doing decided the fate of a continent.

Stuart Reid was born in Aberdeen in1954. His life long interest in military history has led to a longstanding involvement in historial re-enactment, which has broadened into work as a military advisor for film companies. Stuart has written numerous titles for the Osprey military list including a three volume set on King George’s Army 1740-93 (Men-at-Arms 285, 289 and 292) and Warrior 19 and 20 on the British Redcoat 1740-93 and 1793-1815 respectively. His most recent title is Warrior 42: Redcoat Officer 1740-1815. Gerry Embleton has been a leading illustrator since the early 1970s specialising in the medieval period, but with a keen interest in the 18th, 19th and 20th centuries. An illustrator, and author of a number of Osprey titles he has lived in Switzerland since the early 1980s.