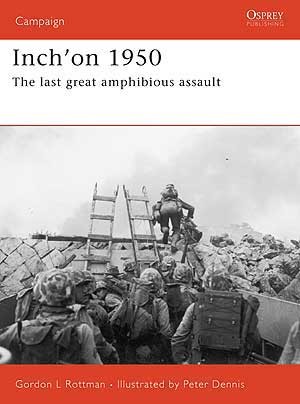 Inch’on was probably the most significant campaign in the Korean theater, as well as being the last major amphibious assault of division-size conducted in the history of warfare. The odds were stacked against the US troops, with virtually no time for training and many of the divisions unprepared for the conflict.

The success of the Inch’on campaign is a testament to the sheer initiative of the officers and NCOs conducted it. This book details the strategy and tactics that led to the operation’s success, as well as narrating the experience of the battle in fascinating detail.

Gordon L Rottman entered the US Army in 1967, volunteered for Special Forces and completed training as a weapons specialist. He served in the 5th Special Forces Group in Vietnam in 1969-70 and subsequently in airborne infantry, long-range patrol and intelligence assignments until retiring after 26 years. He was a special operations forces scenario writer at the Joint Readiness Training Centre for 12 years and is now a freelance writer. He is based in Texas, USA.

Peter Dennis was born in 1950. Inspired by contemporary magazines such as ‘Look and Learn’, he studied illustration at Liverpool Art College. Peter has since contributed to hundreds of books, predominantly on historical subjects. He is a keen wargamer and modelmaker. He is based in Nottinghamshire, UK.