New: Osprey’s “The Men Who Would Be Kings” 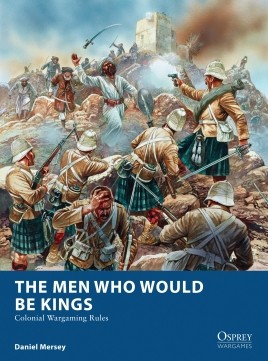 The Men Who Would Be Kings is a set of rules designed for fighting historical or Hollywood colonial battles in the mid to late 19th Century, from the Indian Mutiny to the Boxer Rebellion. Large scale colonial clashes tended to be one-sided affairs, but there are countless reports of brief, frantic skirmishes in every colonial war, where either side could be victorious, and these are the battles that The Men Who Would Be Kings seeks to recreate.

Although focusing on the British colonial wars against the Zulus, Maoris and others, these rules will also permit players to explore the empires of France, Germany, and other nations, as well as allowing for battles between rival native factions. Gameplay is very simple, and is driven by the quality of the officers leading your units, in the true spirit of Victorian derring-do and adventure, where larger than life characters such as the (real) Fred Burnaby and the (fictional) Harry Flashman led their troops to glory and medals or a horrible end at the point of a spear tip.

Daniel Mersey was born within a rifle shot of the Royal Small Arms Factory, Enfield; he was taken to the cinema by his very excited Dad to watch Zulu Dawn at the age of four; and he grew up watching Zulu every Christmas and Easter. As a boy his favourite ‘toys’ were a Martini-Henry carbine and sabre used by the Egyptian army at Omdurman and the (then) newly released Esci Zulu War plastic soldiers. He never stood a chance of avoiding an interest in Victorian colonial warfare. His other miniatures rules include Dux Bellorum (2012), the Origins Award-nominated Lion Rampant (2014), and Dragon Rampant (2015).

Peter Dennis was born in 1950. Inspired by contemporary magazines such as Look and Learn, he studied Illustration at Liverpool Art College. Peter has since contributed to hundreds of books, predominantly on historical subjects, including many Osprey titles. A keen wargamer and modelmaker, he is based in Nottinghamshire, UK.