Judge Dredd: Gangs of Mega-City One

Take a peek into the wretched depths of the megalopolis. We’re looking at the crazed and sometimes bored individuals who stir up violence in MC-1.

The Block Gangs of Mega-City One

Unemployment levels in Mega-City One stand at approximately 98%, making it virtually impossible for the average citizen to secure a job. This makes the youth of the city vulnerable to crazes and border-line insane pursuits such as pro-eating (see the League of Fatties), scrawling and even organised leaping. It also makes many citizens turn to crime. They may do so in pursuit of imagined wealth, or just to alleviate the boredom of their pointless existence.

Each Juve’s ‘career’ will vary widely. Some are happy to feel the rush and small rewards of petty crimes such as scrawling, fare dodging or even dealing in old comic books. Others become caught in the gravity well of organised crime or gang warfare, at which point the risks and rewards multiple exponentially. Those gangs which successfully gain control of a block’s—or even sector’s—distribution of drugs and other illegal substances such as tobacco, Umpty Candy and even sugar can look forward to significant rewards. Some gangs may focus on weapons, body-sharking or organ-legging, whilst others pursue what they consider to be noble causes; these might include pro-democracy activism or crusades against robots and mutants. Some gangs are even insane enough to declare a war on the Judges! 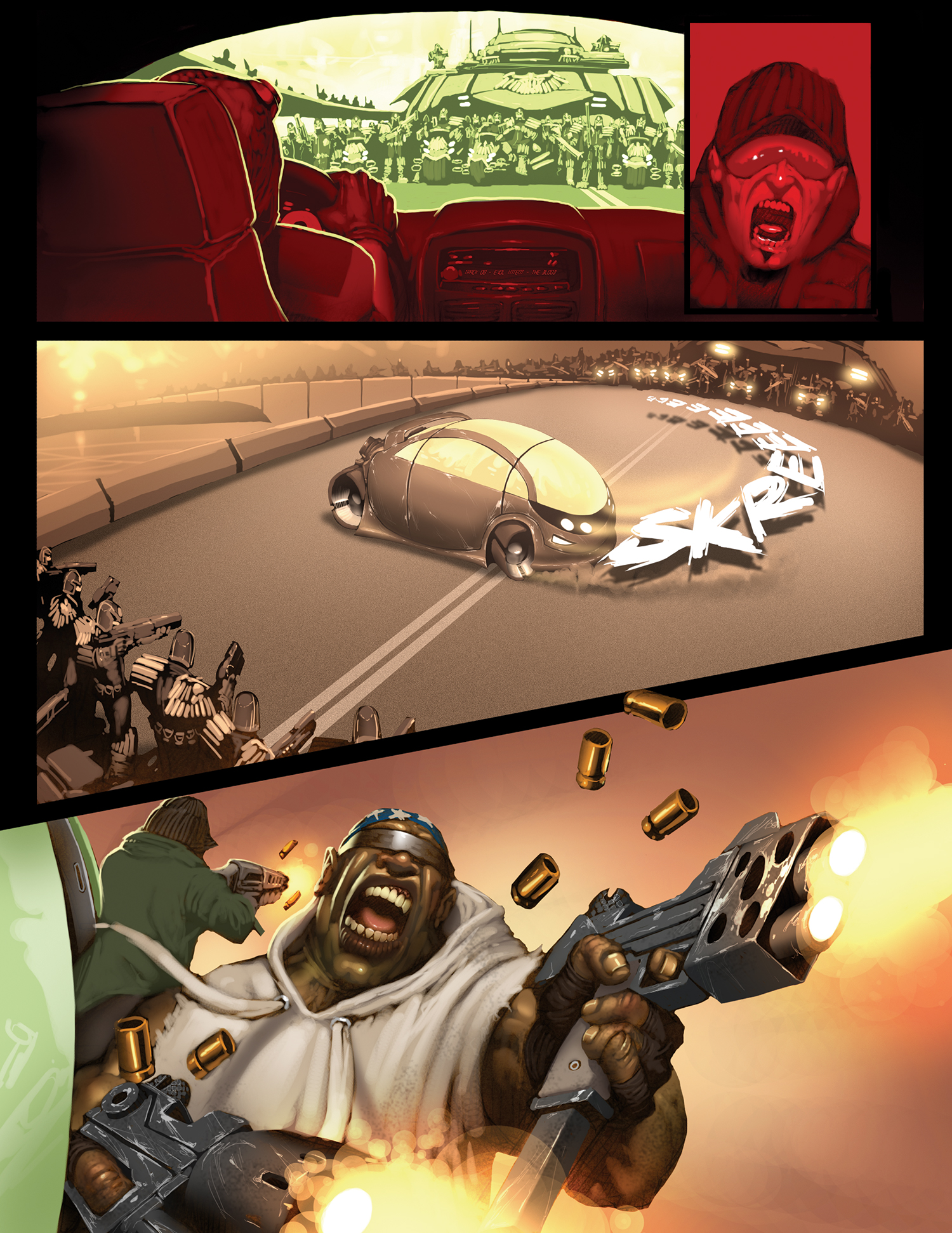 Inevitably, these gangs always fall foul of the Justice Department, and no matter how well-armed or experienced the gang and its members may be, their criminal careers will end. All that remains to be seen is whether those careers end in an iso-cube, or the Resyk center. 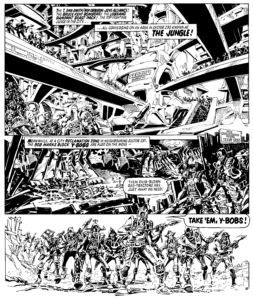 Juves from a number of blocks converge on an infamous area of sector 230 known as ‘the Jungle’. There they intend to ‘slug it out’ in a mass firefight. Sadly for their opponents, the juves of Bob Marks Block have stolen a trio of Rad-Tractors, and are causing chaos on the skedways of MC-1 as they drive their new rides to the Jungle… 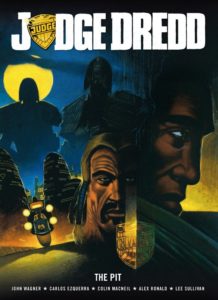 The year is 2117, and Dredd is appointed sector chief of Sector 301, more commonly known as ‘The Pit’. There he finds a sector almost lost to corrupt Judges, organised crime and rampant gang warfare. Can he bring law to this lawlessness?

‘Every juve is exactly the same: they all think joining a block gang makes them indestructible. It’s a sad affliction, but it’s easily cured with a dose of daystick and a holiday in the iso-cubes.’

Block Gang profiles are divided into four different classes: Lieutenant, Heavy, Punk and Juve. Entry level Juves are individually weak, but they have the Pack rule, allowing them to act, move and attack together. This makes Juves dangerous if overlooked by Judges or opposing gang members, and effective at directing fire from their superiors.

The stats of the Block Gangers increase as they advance through the ranks. Although still relatively weak, Punks are more effective than Juves, and—at stats of 3 across their entire profile— Heavies are relatively effective. The full potential of these gangers is, however, unlocked with the inclusion of a Gang Lieutenant. Not only do Gang Lieutenants possess decent stats, but they also wield a cache of effective skills. C’Mon, You Lily-livered Scumsuckers lets Block Gangers return Action Chips back into the blind draw, and Drokk the Stinking Jays! also allows Block Gangers to ignore the Respect the Law special rule; this makes them much more effective when facing Judges.

All these things make a Block Gang more than the sum of their parts. If used correctly, these gangs can pose a threat to even the most veteran of street Judges. 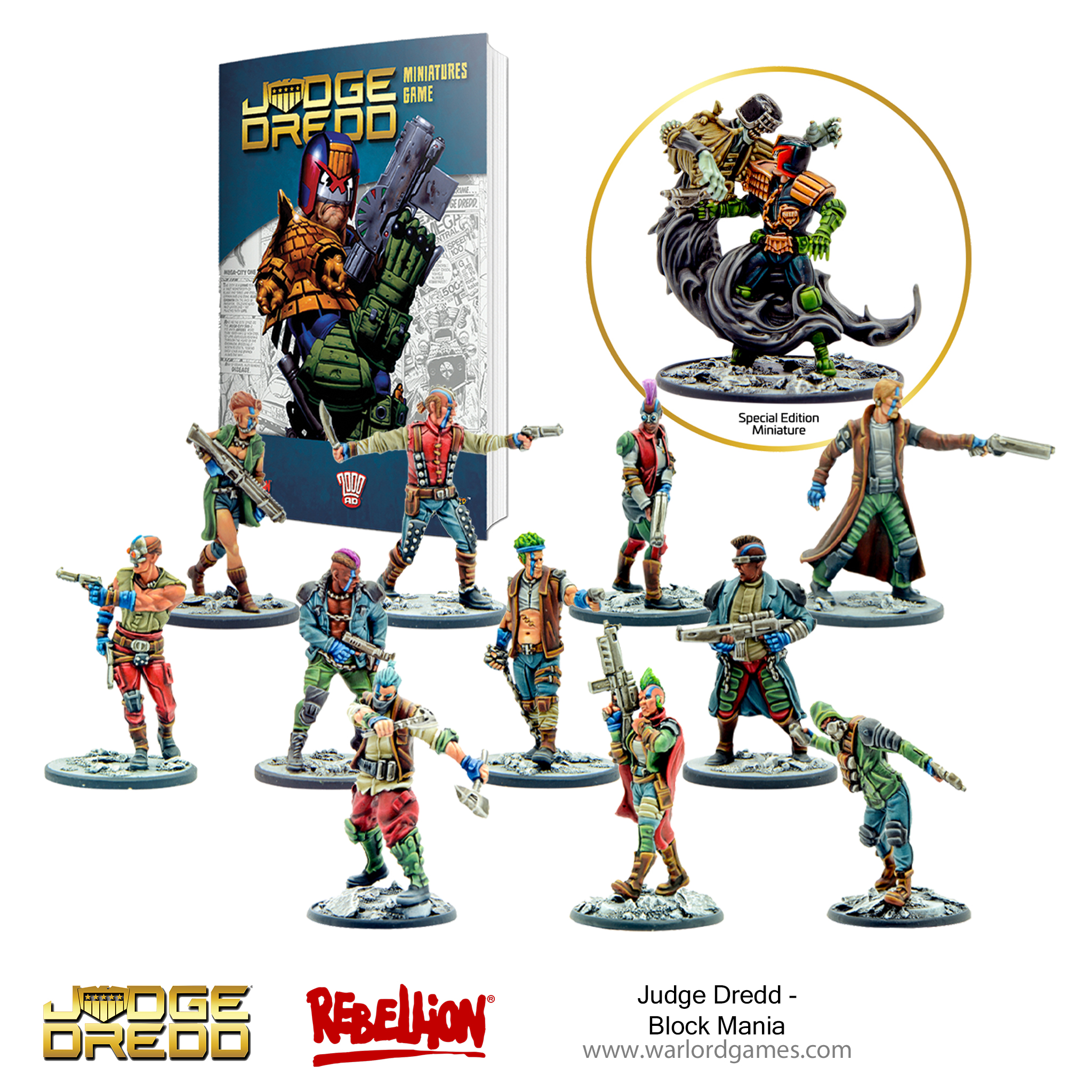 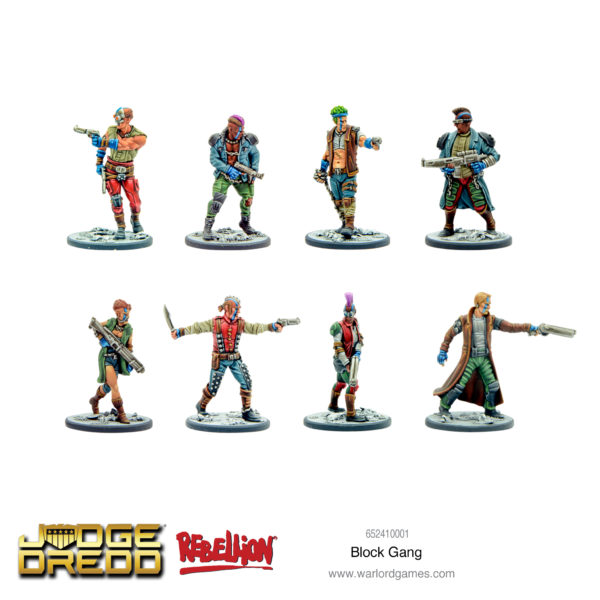 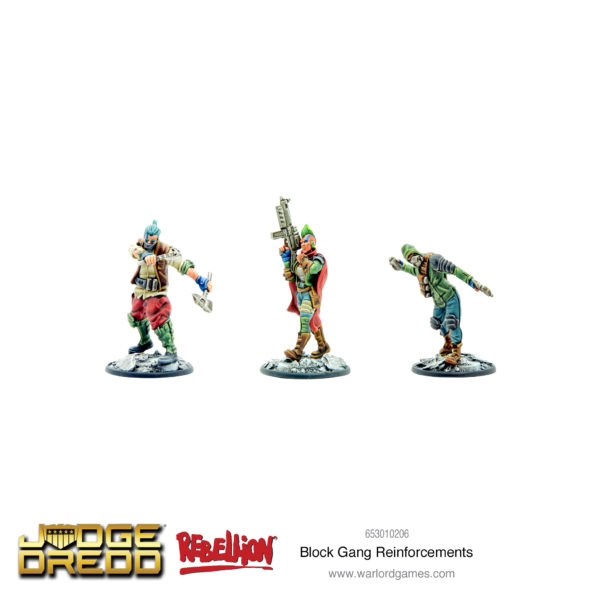 The Heavy Mob: Introducing the League of Fatties

Of the many crazes that grip the bored and largely unemployed citizens of Mega-City One, eating is by far the most popular. As a result, the city boasts a large number of even larger fatties.

Gorging on everything from Munce to Umpty burgers, fatties have turned recreational eating into an art form, and some even live the dream of being professional gluttons. Aspiring children are sent to food camps to gain weight, and those foodies with sufficient talent compete in organised competitive eating championships. Such aspirants can—if they train hard—hope to become big enough to compete in the Mega-City Fats competition and even the Olympics. Some of these organised scoff-offs are less savoury, however, with illegal eating competitions rife in Mega-City One.

Whilst this is all fun and games in times of prosperity, fatties can experience real hardship in post-war periods of rationing or other instances of city-wide disaster. In such lean times, it is not unknown for more militant fatties to hit the streets in organised rallies, or disregard the law altogether and steal their meals. 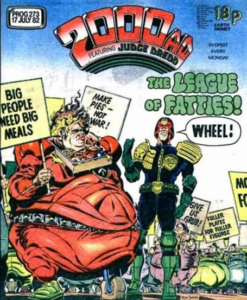 Seeking more rations in the wake of the Apocalypse War, Dick Porker’s League of Fatties unleashes a crimewave on Mega-City One.

Requiem for a Heavyweight (progs #331–34 / Judge Dredd The Complete Case Files 07): broken out of a fat camp by an unscrupulous trainer, Apocalypse War survivor and fattie Arnold Stodgman is embroiled in the murky world of illegal eating contests.

‘Bulk and lack of both mobility makes crime and combat an anathema to fatties. However, fatties can make surprisingly capable opponents who should not be scoffed at.

Fatties are slow and easy to hit. They are, however, surprisingly durable and able to shrug off a lot of damage. Whilst relatively poor in hand-to-hand combat, they are still dangerous at close range, with their Jet Barf! attack rivalling the Lawgiver in its potential devastation.

In short, the fatties are not to be taken likely, and have the ability to chew through their opponents.’ 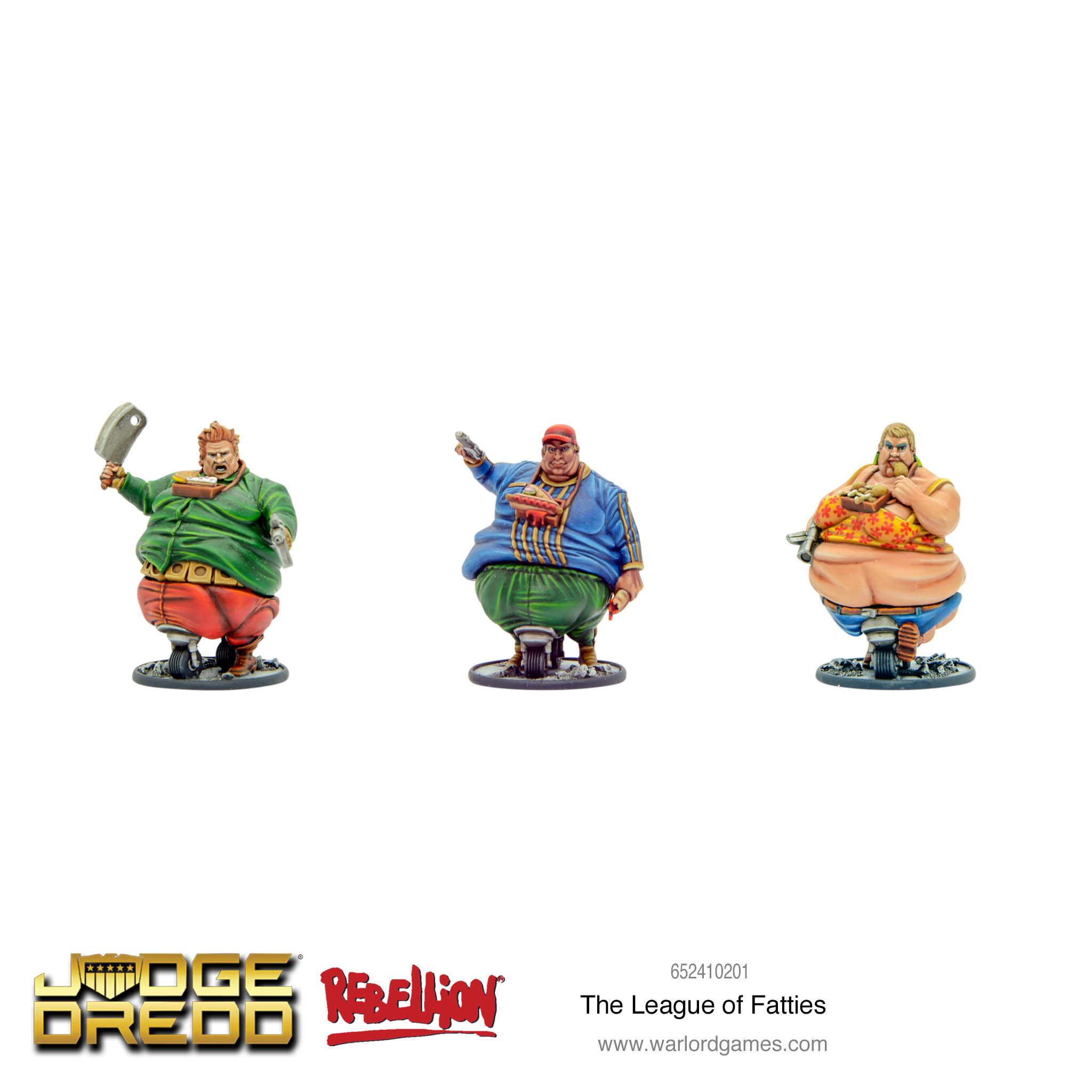