Dan Hoyt from the redoverblue blog had a play with our Churchill MkVII last year with a somewhat different result: 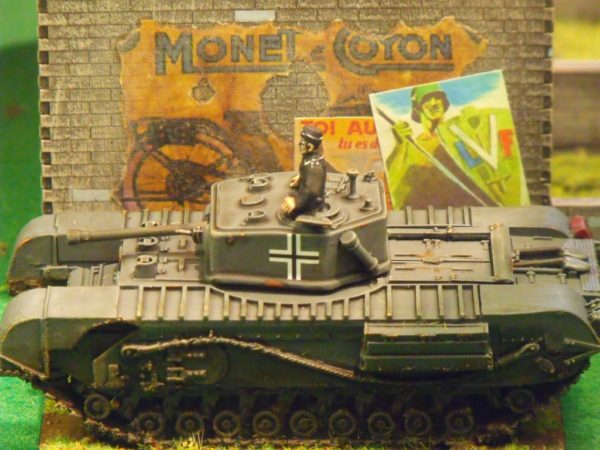 Dan: This vehicle is definitely the most unique model now in my collection. I conducted some minor modifications to convert the Churchill Mk VII model from Warlord Games into a Mk III variant. The nature of the model precluded me from completely changing the appearance to that of the Mk III, particularly the track guards. Regardless, I am happy with the results and hope you enjoy.

My intent with this model was for a captured Churchill Mk III in German colours. Perhaps it was captured after the failed Canadian raid at Dieppe? Or maybe it was captured from the Soviets, where it was in use as part of the Lend Lease program? 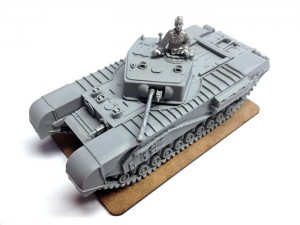 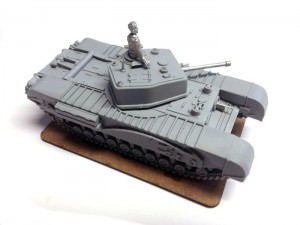 As with all resin kits, I began by scrubbing the model in warm soapy water followed by a cold rinse to remove any mould release agents. I assembled the model as per the instructions on the box, with several notable exceptions.

Since the model is a Mk VII Churchill and I wanted to represent a Mk III, I needed to make a few modifications. Firstly, the bustle on the rear of the turret was omitted, as these were not present. The small angled pieces on top of the rear-side stowage bins were also left out. The 75mm main gun was modified by slicing off most of the muzzle break and filing down the diameter of the barrel. “Tread-heads” will undoubtedly point out that there were myriad other differences between the models of Churchill – alas this is only an approximation of the Mk III Churchill for my wargaming collection rather than a 100% conversion (which would require much more extensive work). I also added a German tank commander instead of the standard British model. 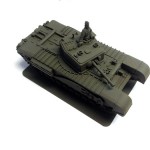 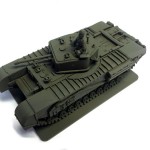 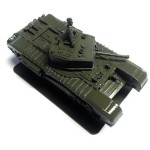 I wanted to have the model painted in standard German dunkelgrau while having the green of its original British/Soviet paint-job showing through at certain places. The model was primed with a dark olive drab aerosol spray primer. After several thin coats to ensure adequate coverage, the model was sprayed with a healthy coat of gloss varnish, then with two thin coats of hairspray (taken from the wife’s beauty cabinet of course). Once the hairspray was dry, I sprayed the model with two coats of a medium grey aerosol spray primer. The gloss varnish acts as a solid barrier to chipping while the hairspray allows the grey primer to chip away with water. Using a tooth pick, an old tooth brush, and some water, I began to lightly chip away at the grey primer in areas that would have received more wear and tear than others: fenders, engines hatches, turret ring etc. At times I was unable to avoid chipping through to the bare resin, but this will get covered up later. 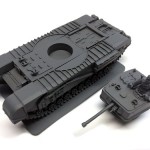 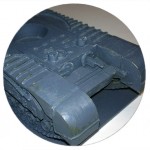 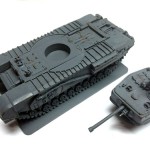 The paint chipping in the previous step left some lovely chipped patches of green paint showing through the grey primer but also some unpleasant areas where it was chipped to the bare resin. To cover this up and to simulate rusting metal, I simply painted over these areas with small dabs of dark brown. On top of these dark brown splotches, I sparingly dab some red-brown rust coloured paint. With this step, less is more. 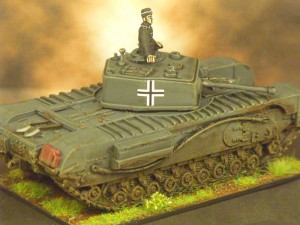 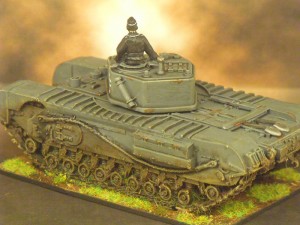 With the weathering now complete, I block painted all the various details on the vehicle. The tracks were painted in a very dark mix of grey and brown, watered down to let the original grey show through. Any metal work was painted with boltgun metal and any tools in dark brown. The fuel cans at the rear of the vehicle were painted in a dark red. 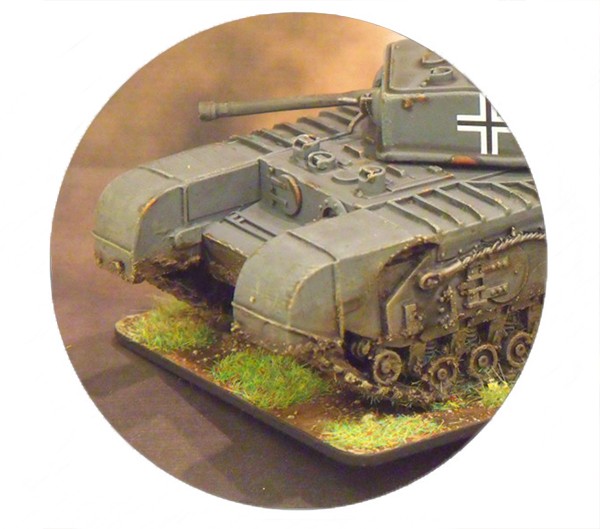 I use the same method for applying mud to all of my vehicles, the “baking soda mud” technique. This is a very simple method, simply mix brown paint (the colour you want your mud to be) with baking soda. The consistency to go for is somewhere around that of toothpaste or wood-filler. Simply use an old stiff brush to slap this sludgy mixture onto the tracks and running gear of the vehicle (less is more) until you have the desired level of muddiness. This takes at least 8 hours to dry completely.

Instead of a wash to give the details of the vehicle depth, I use The Army Painter’s soft tone dip (directly out of the can). Obviously you can’t dip an entire vehicle into a small can like that, but you can apply it easily with a brush. I keep a pad of paper towel and a small jar of mineral spirits (paint thinner) in front of me. Between brush strokes of dip, I wipe off the brush on the paper towel and dip it into the mineral spirits. This helps to prevent the dip from clumping up on the brush and also thins it out slightly on the model, allowing it to flow better. Applying the dip by hand allows you to be very precise with its application, preventing it from pooling and clumping. The reason I use the dip rather than the acrylic wash in the same tone is I prefer its protective properties. The dip acts as an ultra strong varnish, protecting models from the “bear paws” of the average gamer. In fact, after finishing this model I accidentally dropped it on the concrete floor of my basement and not a single paint chip or mark was incurred. 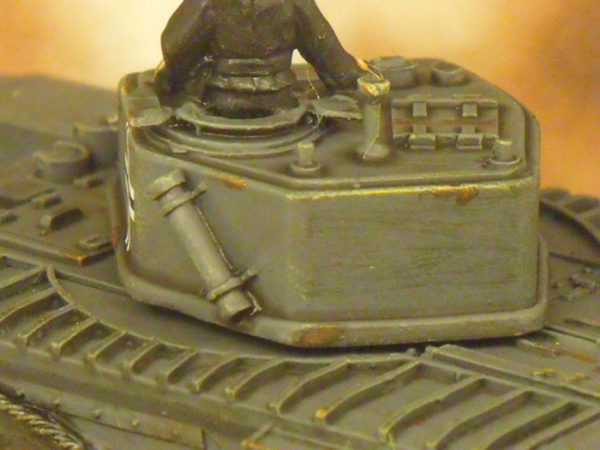 With the dip dry (12-24 hours), I applied a couple of dry brushes to bring out the detail. The tracks and mud were drybrushed lightly with a desert yellow colour. On top of this, and to the entire vehicle I applied a very light drybrush of off-white. 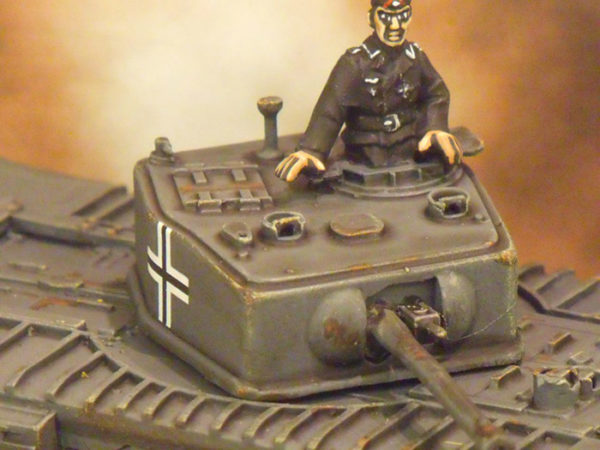 With the dip dry (12-24 hours), I painted the crew commander. His uniform was block painted in black (watered down 50%). The face and hands were basecoated in a dark brown, then layered onto the prominent features with a medium flesh. I then picked out the principle features of the hands and face with a light flesh. The eyes were also painted, something I do not normally do on my rank-and-file models (this is a special case). Narrow horizontal bands of white were painted into the eye sockets. These were then split down the middle by vertical bands of black. The uniform and wedge-cap were piped in white, his medals picked out in silver, and the front lining of the cap picked out in red.

For decals I decided to go with the largest German crosses I had in my inventory, which happened to be from the Early War German decals from Warlord Games. A thin layer of decal solvent was applied to the sides of the turret, then the decals were soaked in water for 30 seconds then gently laid onto the surface. Using a dry brush, I absorbed any excess water. After drying, I applied another thin layer of decal solvent. 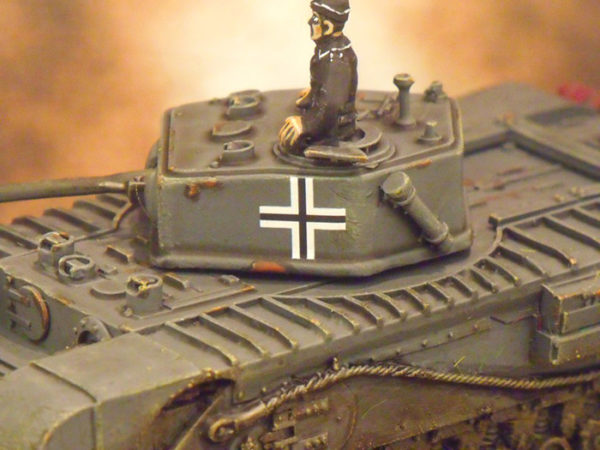 The entire model was then varnished with The Army Painter matt varnish to take away the sheen of the dip. 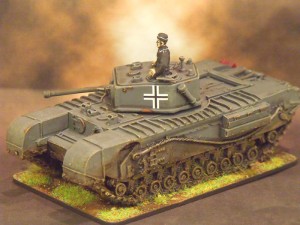 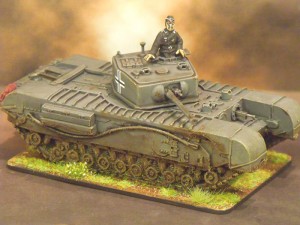 I am a big fan of basing my vehicles, as it gives the gamer something to hold on to rather than the vehicle itself. To texture the base, I make a sludgy mixture of PVA glue, water, and construction sand. This is a lovely product, available for extremely cheap (I bought my 20kg bag for $6 CDN) and exceptionally durable. I mix this sludge until its about the consistency of baby food and then apply it to the base with an old brush. Once set (about 6 hours), this mixture is as strong and durable as concrete, with a lovely texture. I apply a layer of watered down (50%) dark brown paint and wait to dry. On this I drybrush desert yellow and off white. The static grass and various grass tufts are affixed on top, with the edge of the base in black. 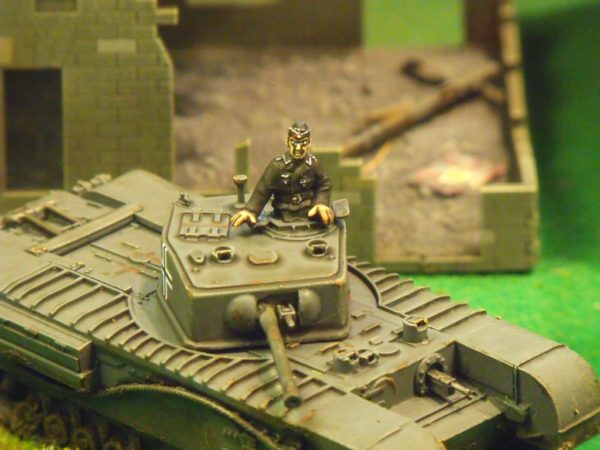 I think this vehicle turned out quite well, and is a good exposition of most of the basic techniques I use in my vehicle painting. I try to ensure all my techniques are simple, easily reproducible, and quick but with a great end result. I hope you enjoyed. 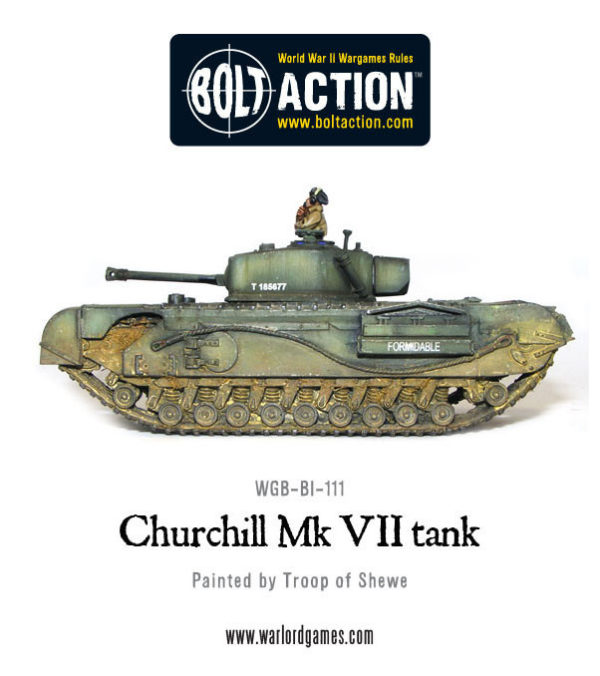