The armies of all nations were made from a series of building blocks – divisions from two or more brigades, brigades from regiments, and regiments from battalions or cavalry squadrons. For example, the following French division formed part of the VI Corps of the French Army of Portugal 1811.

Infantry battalions within a brigade or cavalry squadrons within a regiment fought in mutual support of each other. The brigade or regiment was the main tactical element on the battlefield. 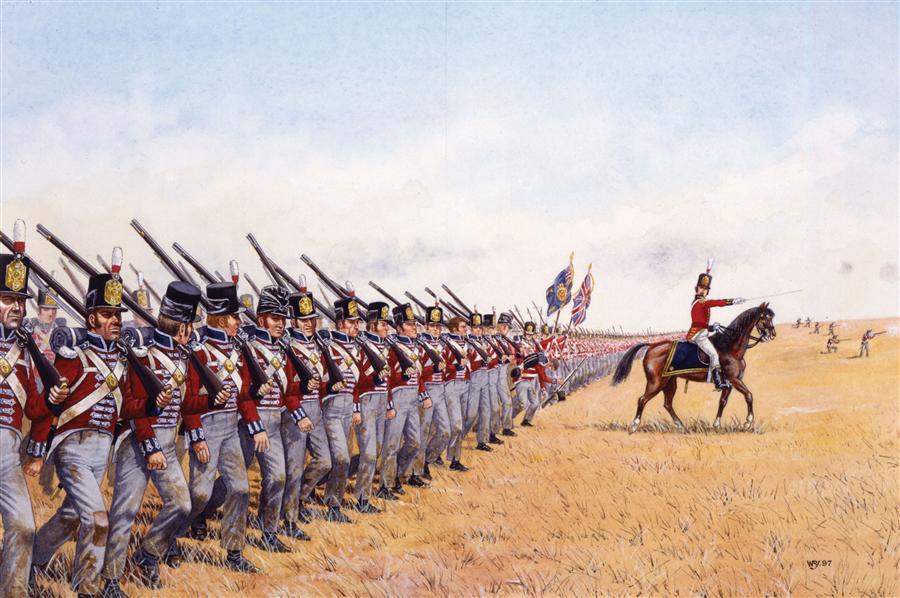 Infantry in the main was designated line or light. A significant tactical development of the Age of Napoleon was the extensive use of light infantry. Introduced into European battle during the Seven Years War and deployed as skirmishers, Austro-Hungarian light infantry stung the steady ranks of Frederick the Great’s armies. Line infantry dominated the field, manoeuvring in a column for ease of movement or to carry the attack into the enemy, only deploying into line for fire effect. Light infantry deployed in skirmish formation to screen columns prior to the attack.

Arms and equipment were to all intents and purposes the same in the Napoleonic period as they were throughout the previous hundred years. Yet the commanders who took the field during the War of the Spanish Succession or the Seven Years War didn’t rely on assault columns to launch attacks or form a square to repel cavalry, tactics which were used extensively on the Napoleonic battlefield. This leads to one conclusion: that if weapons were the same then the soldiers that used them were not.

Most European armies of the Napoleonic period relied on semi-trained conscripts, and these soldiers were not the well-drilled veterans of previous wars. They were unable to deliver effective musketry volleys that could make a firefight decisive, but still, the stalemate had to be broken.

Fighting in column allowed infantry to move around the battlefield rapidly and provided the main infantry shock tactic. In the Revolutionary Wars and early years of the Napoleonic Wars, French attack columns screened by massed skirmishers would, at the pas de charge, make short work of enemy infantry deployed in the old, slow, moving linear formations. The enemy would first be demoralised by skirmish fire and once sufficiently demoralised and disordered, the columns would advance to sweep the enemy away. The column did have a downside though; infantrymen packed close together several ranks deep presented excellent artillery targets compared with troops in linear formations.

Fighting in line brought a greater number of muskets to bear, providing maximum firepower. A battalion formed three deep was typical for most nations, but it did have disadvantages. It was very hard to manoeuvre in line and this could only be performed by troops with a high standard of foot drill. Although a line could be solid to its front it was vulnerable to flank and rear attacks and cavalry that caught infantry in the rear in line would usually destroy them.

If their flanks were secure and their nerve held, infantry firepower could stop cavalry in its tracks. However, in situations where these criteria weren’t present, commanders would rely upon the square formation to prevent infantry from being overrun and destroyed within moments. On the approach of a horse the words of command “form square!” would be given. This must have terrified the poor infantrymen, but if they kept their composure, they would form into a roughly square shape that presented a wall of bayonets to ward off cavalry.

In France, the mixed order formation was developed and the years-old debate about the best tactical formation for infantry was solved. Born out of both tactical and human necessity, battalions within a brigade formed with some units in column and others in line. This allowed a brigade to provide a blend of both shock and fire effect. The Levèe en masse brought large numbers of citizen soldiers to the battlefield, with these untrained masses only capable of being herded around the battlefield in rough columns. To provide stability they were regimented with regular units who deployed in line to provide fire support. These new formations were called demi-brigades.

The cavalry of the Napoleonic Wars could be grouped into four main categories: heavy, medium (or line), light and lancers. 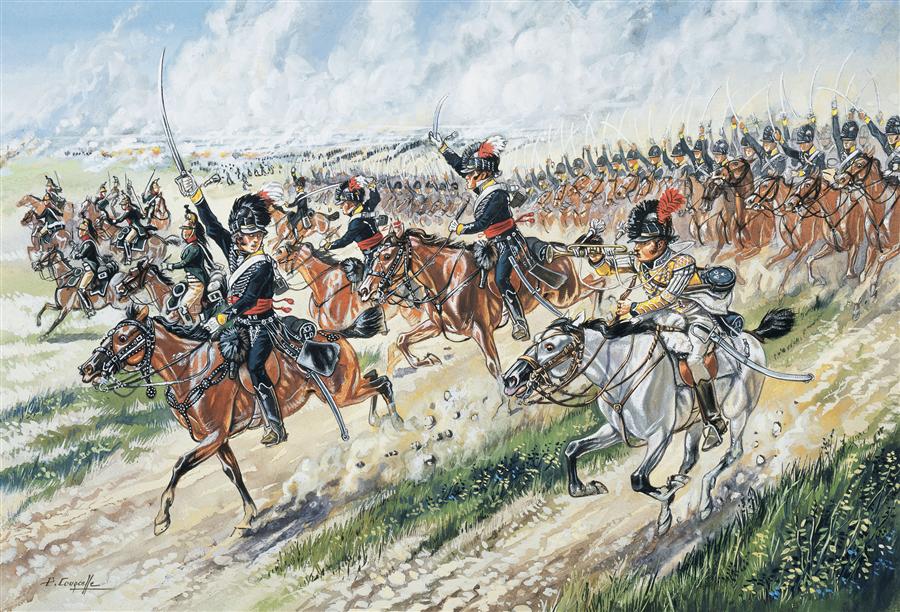 The heavy cavalry was the shock arm of the army and were big men on big horses. Their main role was to clear the field of enemy heavy cavalry and destroy infantry formations.

Heavy cavalry formations were some of the most valuable assets in the army and were not used until absolutely necessary. Cuirassiers and carabiniers were found in most European armies, whilst the British had heavy dragoons.

Medium (sometimes known as a line) cavalry had a similar role to that of their heavier cousins. They also provided tactical flexibility, being capable of the pursuit of a defeated enemy or providing rearguard support during a retreat. Dragoons, in the main, fitted this role and were more numerous than the truly heavy cavalry.

The term light cavalry covers many different types of unit; light dragoons, hussars and Chasseurs à cheval for example. Light cavalry was used to protect the flanks of an army as well as in reconnaissance and pursuit roles but had a little shock effect on the battlefield.

Lancers provided the shock effect of heavy cavalry with the manoeuvrability of true light cavalry. They were used to provide heavy cavalry support as well as attacking infantry, even when they were in square. The Hungarian and Polish light cavalry were much admired, their hussar or lancer styling being copied by many nations. Like the infantry, cavalry could be deployed in line or column on the battlefield and preferred to fight in line against mounted opponents and in columns against infantry.

Artillery was split into two categories, foot and horse, with both seeing a great deal of improvement in the 18th Century to make guns much more manoeuvrable. However, all artillery was inaccurate and had to be re-laid after every shot. 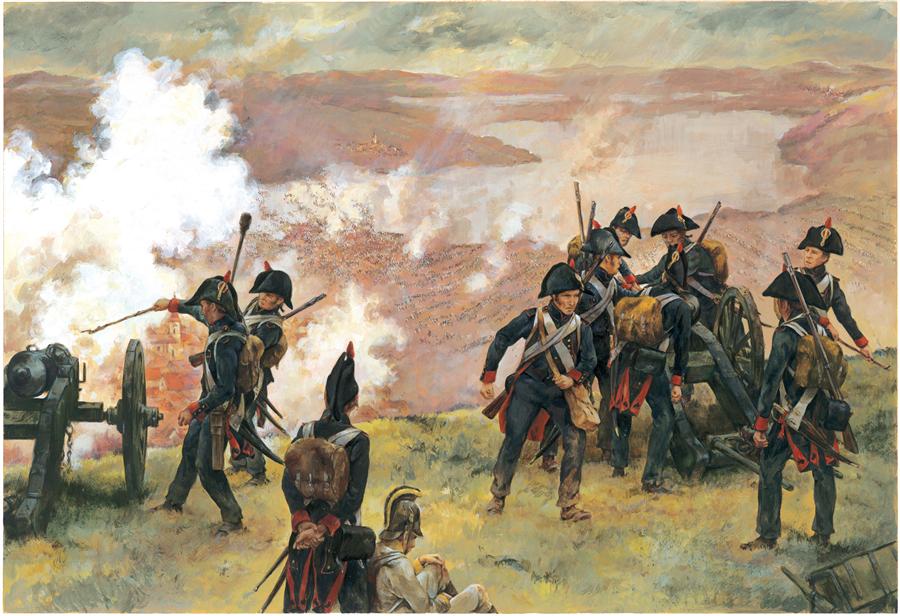 The smallest guns put in the field were three and four pounders and the heaviest were the twelve pounders; the guns graded by the weight of their cannon balls. The three and four pounders were usually used as regimental pieces, providing direct support to the infantry and cavalry. The twelve pounders, on the other hand, were the queens of the battlefield. They were normally grouped together, opposite the enemy line where the main attack would be put in. Great concentrations of guns, to provide a massed preliminary bombardment, was another new battlefield feature of the Napoleonic period.

In between those two extremes, there were numerous other types, the six to nine pounders. In most armies, six pounders were used as horse artillery to good effect.

Artillery, whatever the weight, delivered death on an unprecedented scale during the Napoleonic wars. 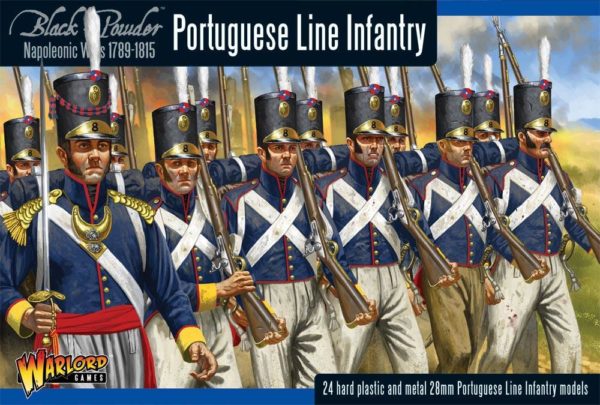 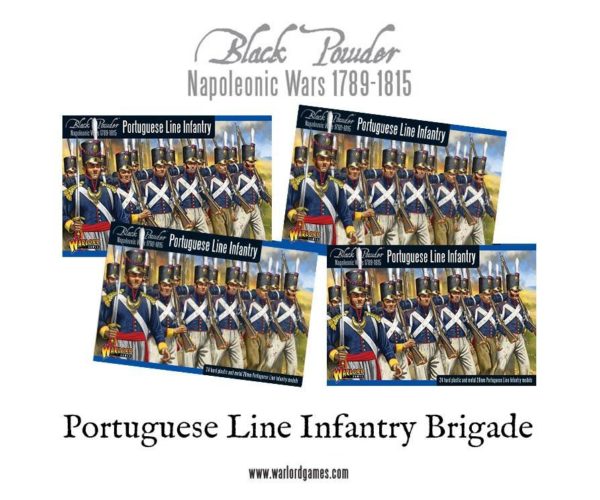